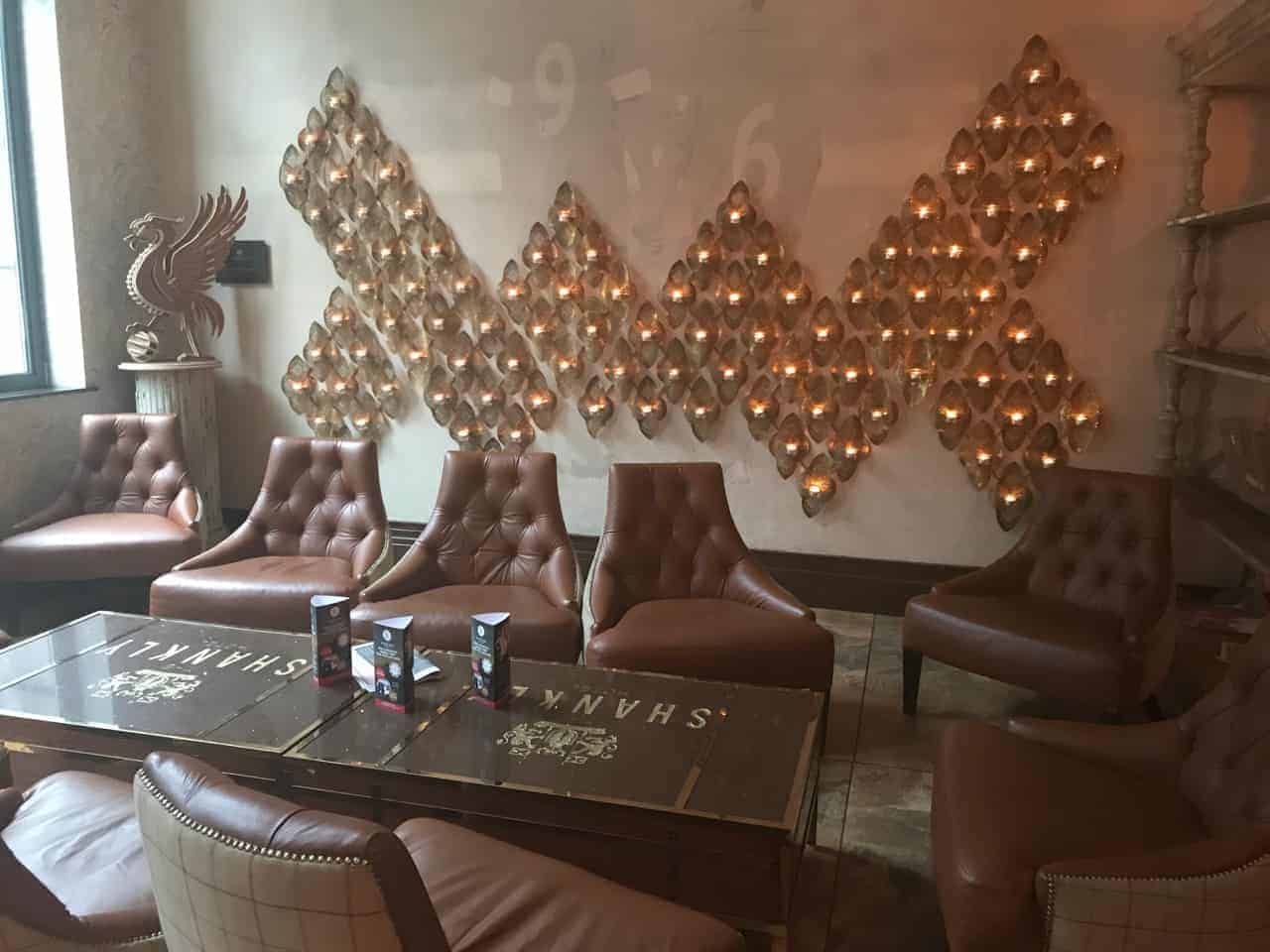 A Liverpool-Themed Tour at the Shankly Hotel

If you’re a Liverpool fan, in town for a game at Anfield, you really should swing over to the Shankly Hotel in the city center. You can stay there, of course, but you can also take a Liverpool-themed tour of the hotel’s memorabilia collection and of the city itself.

Here’s an introduction to this very cool Liverpool fan experience.

Who Was Bill Shankly? 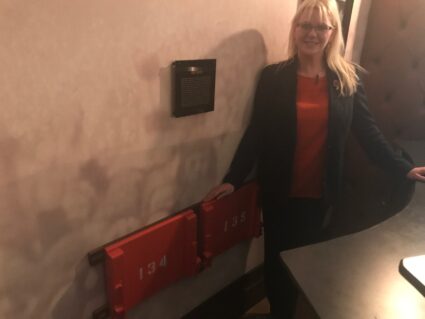 Bill’s granddaughter, Emma, with the family seats from Anfield.

If you’re new to this, and/or not a Liverpool fan, let’s start with that name, Shankly. That would be Bill Shankly, Liverpool’s manager from 1959 to 1974. But that’s like saying Sir Alex Ferguson was Manchester United’s manager — a statement that needs some perspective.

When Shankly took over at Anfield, Liverpool were a mid-table team — in the second tier. It’s hard for people to grasp at this point, but until then the club had won the First Division just once since the 1920s and had never won the FA Cup or even played in Europe.

Shankly cleared the roster and invested in facilities, and both training and tactics were revolutionized. Crucially, he converted the club’s boot room into a private meeting space where he and his assistants could meet to discuss players and tactics. This was something new at the time, and it worked, to say the least.

By 1962, Liverpool were back in the first division. They won it in 1964. And then they kept winning. When Shankly suddenly retired in 1974, he had three league titles, two FA Cups and a UEFA Cup (today’s Europa League). Team management was handed off to one of his assistants, Bob Paisley. And the winning continued: in his nine years, the club added six league titles, three European Cups (today’s Champions League), a UEFA Cup and three straight League Cups.

So Shankly is, you know, a really big deal in Liverpool. 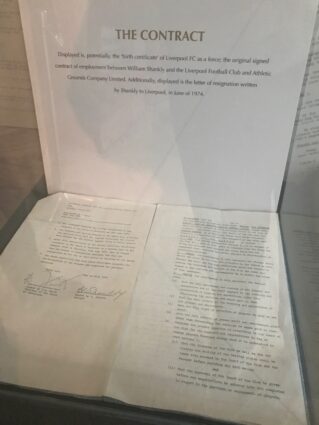 Shankly’s original contract with the club. 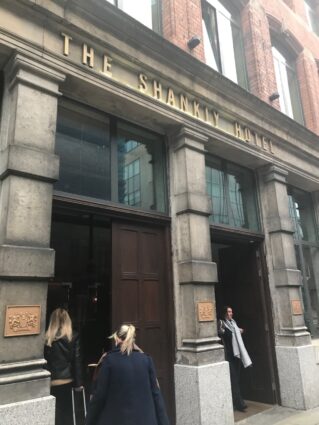 The Shankly Hotel in Liverpool.

The Shankly Hotel is just a few minutes’ walk from the main station in town, Lime Street. It is run by Shankly’s grandchildren, and the lobby area is packed with club and personal memorabilia. If you’re in town for a game at Anfield, it’s hard to imagine a more Liverpool-fan place to stay.

I took a tour there with Emma, Shankly’s granddaughter, and aside from the club history and artifacts, you get to hear little personal touches like the sword that Shankly got from Kevin Keegan, and how the kids would always touch it on their way up the stairs.

Other things on the tour include Shankly’s original contract with the club, a good-luck telegram from The Beatles before an FA Cup Final, a scarf famously given to him by The Kop, and the typewriter on which he wrote columns for the local paper.

They also offer club- and Shankly-themed city tours, featuring stops at the Shankly home, Liverpool training ground, and eventually at Anfield itself, where they can drop you off for a stadium tour.

If you want more information on all of this, check out ShanklyHotel.com.

Meanwhile, here are some more photos from my tour: 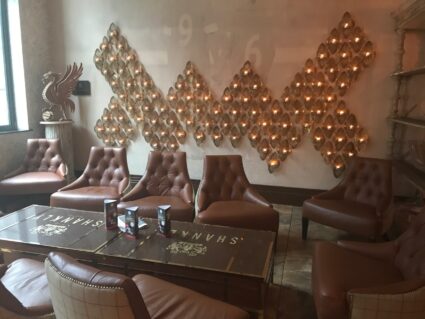 Memorial for the Hillsborough 96. 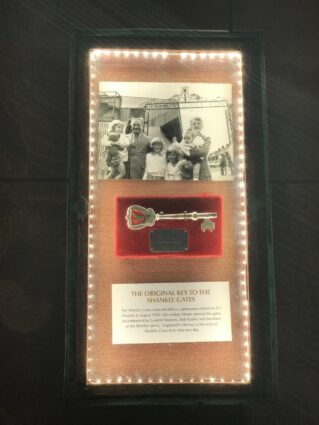 Original key to the Shankly Gate at Anfield. 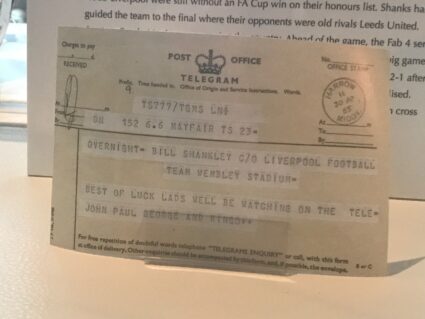 Good-luck message from The Beatles. 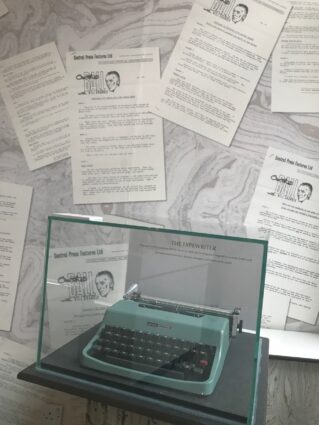 Shankly’s typewriter and some of his columns. 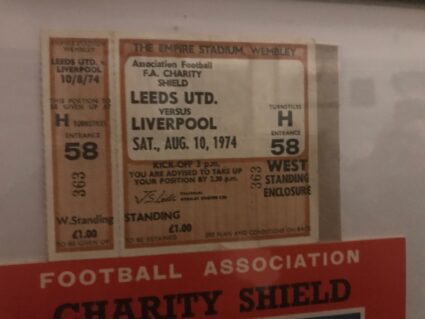 Ticket from his last game. 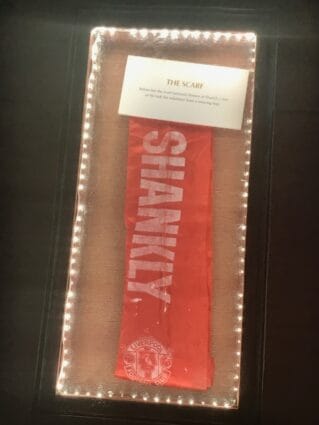 A famous scarf given him by the fans. 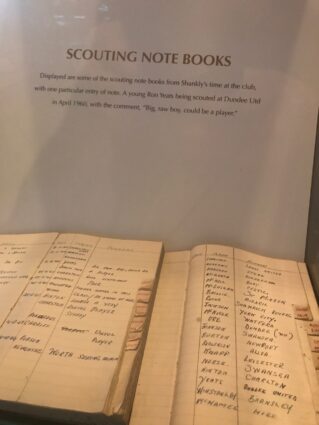 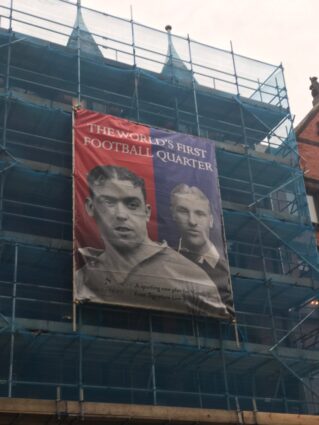 They are working on an Everton version across the street!