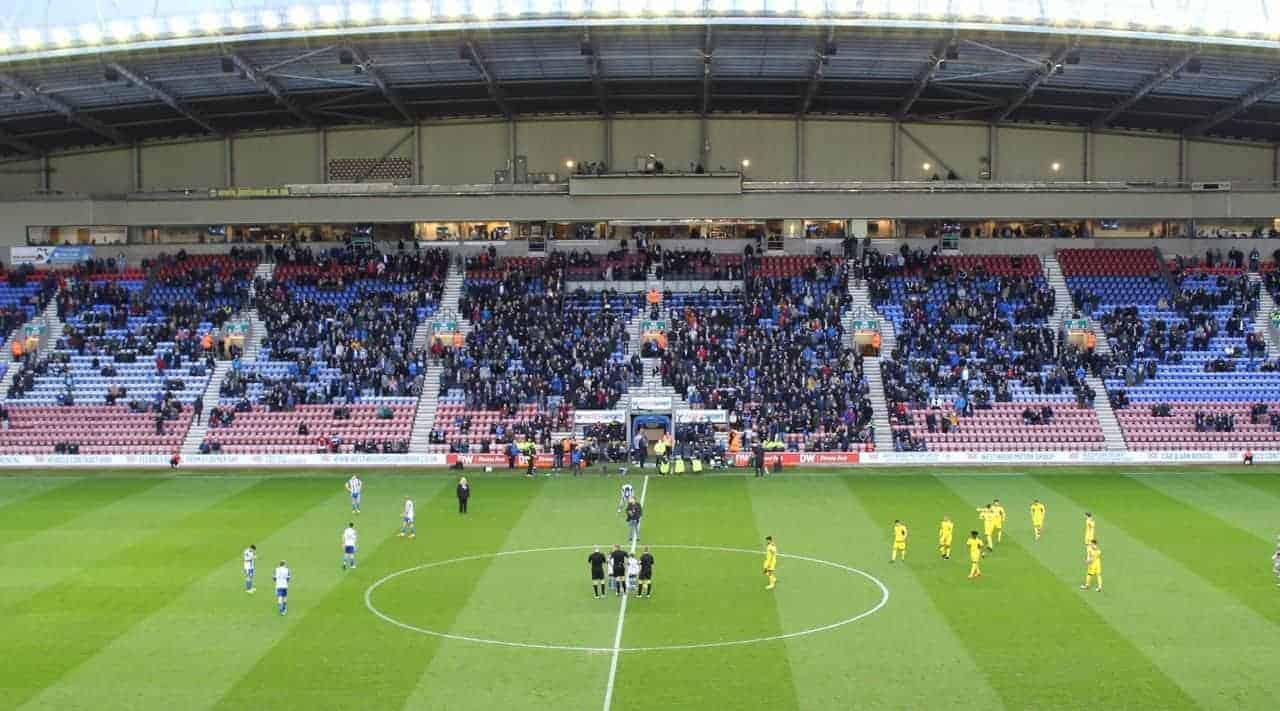 We’re off to Lancashire in the northwest of England to meet Wigan Athletic, who were in the Premier League as recently as 2013 years ago but have been on quite a ride since.

This post is essentially a chapter from my English soccer guidebook, The Groundhopper Guide to Soccer in England. 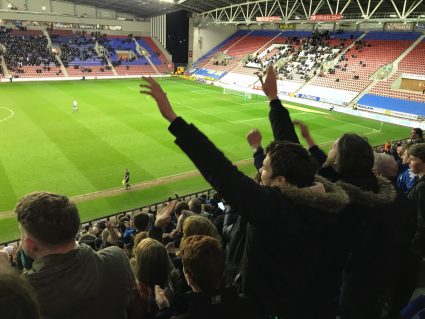 They’re whooping it up at Wigan.

For years a story of plucky over-achievement, topped off with a remarkable moment of success, Wigan then crashed onto hard times.

Wigan, between Manchester and Liverpool, about 30 minutes from each by train.

The Latics or just the Tics. Apparently this is based on the pronunciation of “Athletic” in the local accent. 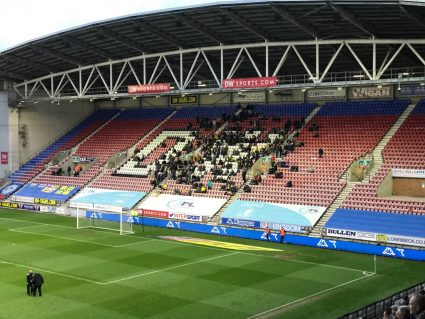 Visiting Oxford United fans in the away end at the DW.

Compared to many clubs, Wigan are quite young. They go back “only” as far as 1932, when the club emerged from a series of other local clubs from the previous 40 years. The town was always better known for its rugby club – and, indeed, the one athlete honored by a statue in the area is a rugby player – but the Latics were considered one of the top non-league football clubs in the country. Still, they were so small that their colors changed in the 40s from red to blue because the local sports shop ran out of red shirts.

They kicked around a lot of local leagues before finally making it into the Football League in 1978, and in just three years got up to the Third Division. But the main event in their modern history occurred in 1995 when the club was purchased by local businessman Dave Whelan.

Whelan grew up in Wigan and played for Blackburn Rovers. He appeared in the FA Cup Final but broke his leg – hold that thought – and soon after retired to concentrate on his business ventures. He started with a market stall in town, built that into a chain of 10 groceries, then sold that and went into sporting goods and fitness centers which is now a nationwide chain of stores. When he bought the club in 1995 he said he would take it to the Premier League, and in 1999 he laid out the £30 million for their new stadium.

They won the Third Division in 1997, won the Second Division in 2003, and in 2005 made the Premier League. Their first year they finished 10th and made the League Cup Final, and for the next eight years they were a model for a small club from a small city hanging on in the big time.

In the 2012-13 season, they ran into big trouble in the league but made an amazing run in the FA Cup. They got to the Final and faced mighty Manchester City; Whelan himself led the team out. Incredibly, they won it 1-0 on an injury-time Ben Watson header off a corner kick, in front of their own fans. The television announcer famously said Watson had won it for Whelan. You can see him briefly celebrating after the winner here:

Whelan still owns the club but no longer runs it; there’s a statue of him holding the Cup outside the West Stand: 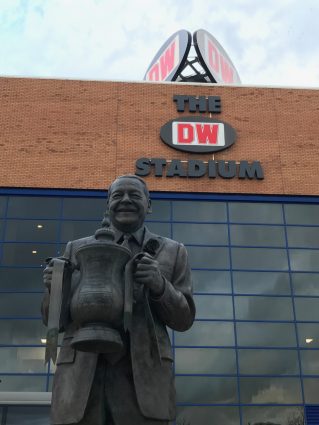 The man and his coveted Cup.

Sadly, Wigan also became the first club in history to win the FA Cup and get relegated in the same year – three days later, in fact. Two years after that they dropped down to League One. They got back up in 2016, went back down in 2017, went back up a year later but down again to League One for the 2020-21 season.

There are so many clubs around (see “Make Manchester Your Base”) that Wigan – despite having a short history with all of them – consider Bolton Wanderers (especially), Preston North End, Oldham Athletic, Blackburn Rovers, Burnley, Bury and Rochdale as rivals. 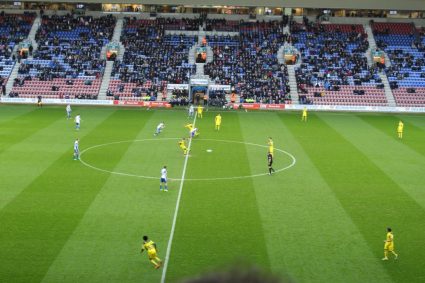 In the pregame buildup you’ll hear The Monkees’ “I’m a Believer.” This comes from the 2012-13 season, when the football team’s success in the Cup and the rugby team’s claiming two trophies led to a city-wide “Believe in Wigan” campaign.

23rd in League One (relegated), 3rd Round FA Cup; 1st Round League Cup. 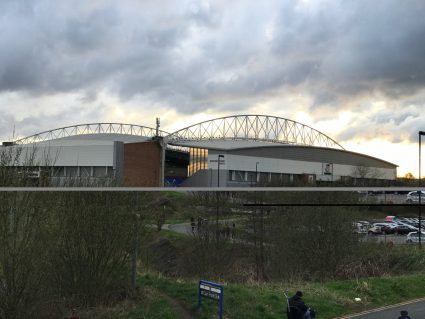 The DW Stadium is pretty much the epitome of the modern English football stadium: clean, comfortable, without much character, and next to a shopping center. It holds 25,138 – a little odd since the official record crowd is five people fewer than that. The away fans will be in the North Stand, and the South Stand is the family section. The rowdy Wigan fans will be in the north end of the East Stand, making for some decent banter with the away supporters. There is always a drum in that end of the East Stand, though; you’ve been warned.

Last year they were £20-25. No way they sell out a game unless they draw a big boy in the FA Cup. 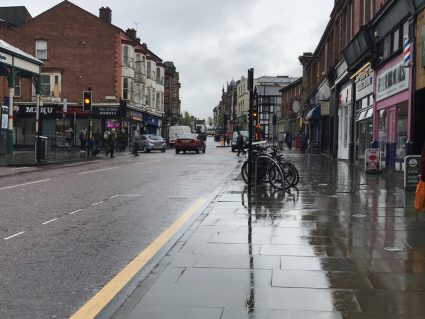 Both Wigan stations – for some reason, a town of 100,000 people has two train stations across the street from each other – are about a 30-minute walk from the stadium. From the stop right in front of North Western Station, take bus 628 or 641 to Montrose Avenue, then follow the colors. Blue Star Taxis has an office on the main road; you might want to arrange something for after the game, as well.

There are several good options right in the town center. The Swan and Railway is just across from North Western and is a pretty traditional pub. Up the street away from the tracks are the Moon Under Water, the Clarence Hotel and the Berkeley. The Red Robin (not our burger chain) is a modern pub in the shopping center by the stadium and hosts away fans as well. The two best options are The Anvil, run by a local brewery and just a few minutes from the station, and Wigan Central, a more modern spot just past the tracks and on the left. Both have great beer selections. 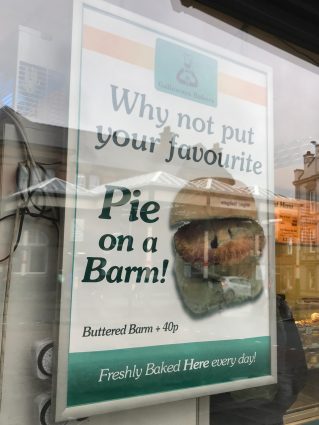 I laughed when I saw this … then found out it’s the local specialty.

Wigan is nationally famous for meat pies. In fact, every December, Harry’s Bar hosts the World Pie Eating Championships. Apparently the story goes back to a 1920s strike when the locals were the first back to work, thus having to eat “humble pie.” In fact, folks from Wigan are often called Pie Eaters or Pie Men. Asking which is best is like asking somebody from Philadelphia about cheesesteak sandwiches, so let’s just say that the three most convenient and highly-rated options are Galloways (across from Wallgate Station on the main drag), Greenhalgh’s a few minutes north on Market Street, and Poundbakery, also on the main drag.

Of course, this being England, somebody decided that a pie (like so many other things) would be even better if you put it on buttered white bread! It’s called a pie barm, or a Wigan Kebab. You can also have them pour pea juice on your pie; this is called having it “pea wet.” I dare you to order that.

Wigan is also the home of Uncle Joe’s, purveyor of famous mint balls. Sadly, their shop in the town center closed. But I thought you should know.

If you’d prefer fish and chips, look for Mr. Chips over behind the church. And if you want Indian, check out The Raj on Woodhouse Lane, about a 10-minute walk from the stadium. Vegetarians will like The Coven in the center. 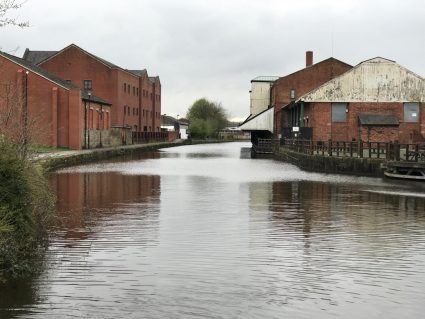 The Leeds and Liverpool Canal

Honestly, aside from the pie and the mint balls and the beer and the football, there’s not a lot to do in Wigan. There was a world-famous disco called Wigan Casino back in the 1970s, but it was replaced by the Grand Arcade; there are still a number of nightclubs along King Street. There is the Wigan Pier, actually a docks area along the Leeds and Liverpool Canal made famous (for being awful) in a book by George Orwell. But that seems abandoned. Mesnes Park is nice but is just like the parks in many other towns.

Get yourself a pie (barm), a pint or two, and head out to the game.

Here are some photos from my day in Wigan: