What is the Football League Trophy, or Papa John’s Trophy?

English soccer has many tournaments, including the FA Cup and the League Cup, aka the EFL Cup. Both of those are considered lesser competitions than the actual league season, especially for the clubs in the Premier League and the Championship, which are the highest levels of the English Football League.

Here’s an introduction to the Football League Trophy, also known as the Papa John’s Trophy for sponsorship reasons. 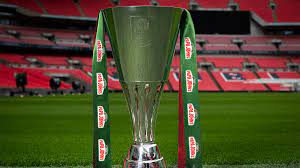 Another rung down the ladder, below the FA Cup and the League Cup, you find the League Trophy. (Yes, somehow, in English parlance, a Trophy is less than a Cup. And for you Americans, they don’t even have bowls.)

Learn about all the leagues and cups of English soccer.

So the FA Cup is a non-seeded, non-bracket tournament for pretty much everybody in the country. The League Cup is the same thing for the 92 fully professional clubs. And the League Trophy, currently known as the Papa John’s Trophy because those folks cut a check, is the same thing for just League One and League Two. Sort of.

In other words, again for you Americans, it’s like a baseball championship for Single-A and Double-AA only. And the format is a little different from the FA Cup and League Cup, in that the League Trophy has a group stage followed by a knockout stage.

The EFL Trophy is currently sponsored by Papa John’s Pizza.

How does that work? In the group stage, everybody plays everybody else home and away, and then the top two advance to the knockout stage. There, they play one-off games to determine who advances. The final is at Wembley Stadium.

For these small clubs, it can be a pretty big deal, because it’s something they can win, or at least something that can get them to Wembley without having to get past clubs in the Championship or Premier League. 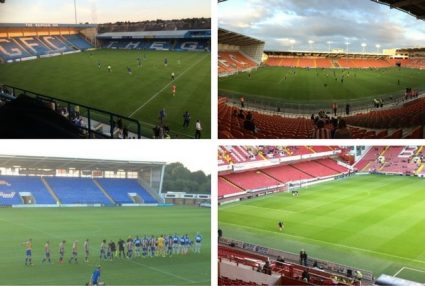 At least, that used to be the case. Such is the power of these bigger clubs that, for the 2016-17 season, the big boys looked down at the little Trophy and said, “You know, we could use that.” And so the Football League passed a rule that said Championship and Premier League teams can send their Under-23 squads into the League Trophy.

Let’s just say it wasn’t a popular decision. One common way for fans to show their disgust was to simply refuse to show up. The all-time record low attendance mark was set at many grounds, such as Fratton Park, home of Portsmouth FC, where all of 1,355 people showed up to see them play Reading FC’s academy team. 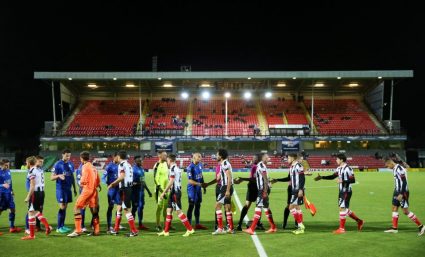 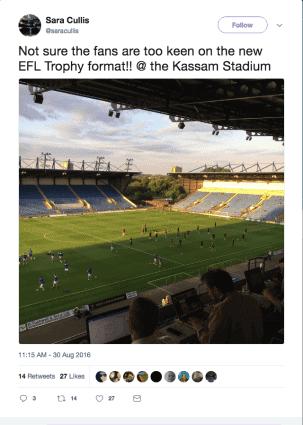 Everyone’s fear, for the first go-round of the new format, was that the big final, at Wembley in early April, would be Manchester City Reserves (no, not New York City FC, the actual reserves), against the Chelsea Under-23s. And that, let’s be honest, would suck for everybody.

As it happens, we got a good old fashioned final, with Oxford United, who played their way heroically up to League One, taking on Coventry City, a formerly big-time club (see the 1987 FA Cup) who are now toiling away in League Two.

Coventry won themselves a trophy on the day, which is really quite a story, even though hardly anybody gave a crap. But, you know, tell that to the folks here in blue and white.

Groundhopper Paul has come across the League Trophy once in his travels. Here he recounts how it happened:

Not a big turnout for the League Trophy game Groundhopper Paul saw at Barnet.

I was headed for a game at Barnet FC, just north of London, when on the way I realized that (A) it was a League Trophy game and (B) both teams had already been eliminated! This led to what I call my non-game at Barnet FC.

If nothing else, the League Trophy can be a decent way to get into a stadium if you’re just trying to knock out as many clubs as you can. The games tend to be relaxed, friendly, and cheap; I paid 10 quid to get into Barnet that night. And that, for most people, is about what a League Trophy game is worth!