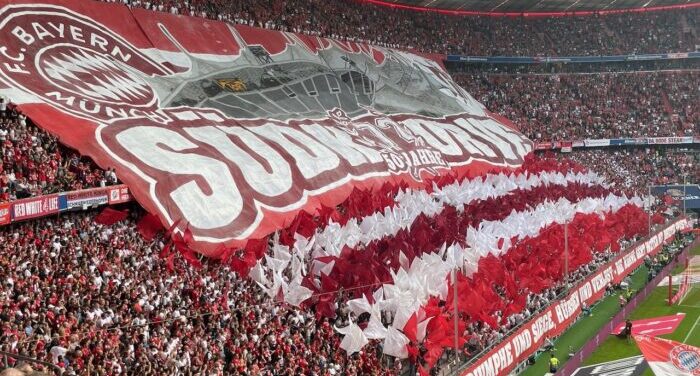 13 Ways That Watching Football in England and Europe are Different

What are some of the differences between watching soccer, or football, in England vs watching it in Europe? Here’s an attempted answer from an American who’s been to nearly 200 games between the two.

First, let’s acknowledge that “Europe” is an awfully broad term. A game of Fußball in Deutschland is quite different from una partita di calcio in Italia, but in many ways, the two have more in common with each other than they do with a game of “footy” in the UK.

Also, when I say England here, I mean the English leagues, some of whose teams are actually in Wales.

We at Groundhopper Soccer Guides think seeing a game just about anywhere is a fun experience, and we exist to help you do that. We combine ticket sales with trip consulting and tours, as well as informative and, we hope, entertaining content to give you a fuller experience from planning your trip to singing in your seats.

So, what are the differences we’ve found between watching football in England and on the continent? 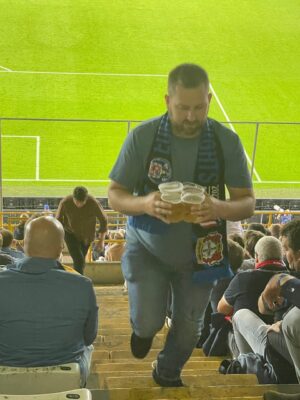 In Europe, specifically Club Bruges here, they get the beer thing.

For many people, especially Brits, this is the biggest difference. In England, a national law says that if you’re watching football in person in the Football League or Premier League, you cannot also be drinking alcohol. It’s a silly (we think) rule that goes back to the hooligan days, and it also explains why, just a few minutes before a Premier League kickoff, the stands are half full: People are on the concourse pounding down those pregame pints.

In Europe and the rest of the world, this is not the case. In fact, in Germany they sell carriers that hold four cups of beer at once so you can carry them to your seats! And in at some Italian grounds I’ve been to, you can buy beer in your seats – same as in the United States, by the way.

In England, what song is sung and when seems to be a largely spontaneous decision, or is tied to a moment in the game. For example, if there’s a corner kick awarded to Portsmouth, rest assured their supporters will immediately erupt in “Play Up Pompey.” But in Europe, most of the singing is (A) constant and (B) driven by …

We can argue all day about the “better” atmosphere, but in England you won’t see a hardcore ground of fans behind one goal, constantly singing and waving flags and performing choreographed chants and clapping led by a person or people with megaphones. This seems to exist everywhere in Europe, however. And lest Liverpool supporters speak of the Kop – yes, that’s impressive, but the Curva Sud at AC Milan, among many many others, does not sit down or ever drop the singing or flags while the game is going on. And nobody is in front of the Kop with a microphone, calling out the songs. 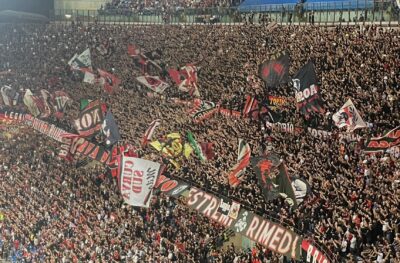 The Curva Sud at AC Milan — during a game.

Speaking of sitting down…

England effectively banned “persistent standing” at top-flight games in the early 1990s, again in response to the hooligan madness. They are just now considering “safe standing” areas in some stadiums. In the European grounds I’ve been to, this seems to just be part of the experience – not in the whole stadium, but certainly among those Ultras. And in Germany, at least, we’ve seen whole areas of the grounds set aside for standing.

Many English clubs have a pregame song, like “We’ll Be With You” at Stoke or “Marching on Together” at Leeds. But in Europe, not only does everybody have one, many have more than one. And they are almost always a sort of highly dramatic ballad or rock anthem, played over the speakers, with the crowd joining in. I’ve been to Italian games where two or three of these are played pregame.

Here is Lazio singing theirs:

European fans love themselves a tifo, or a big pregame display of placards or a banner. At the top of this post is one from Bayern Munich.

It may be that I happened on some particularly big games on the continent, but I can only remember a handful of these displays in England, whereas they seem quite common in Europe. The most impressive by far was at Lyon, where the Bad Gones ultras hung a curtain to reveal four different tifos marking their 35th anniversary as a supporters’ group. And then they lit up a ton of …

While flares seem universally illegal in England, they are everywhere in Europe. We’ve seen massive, pre-planned displays of flares in European grounds, once at Bayern Munich even causing the game to pause while the smoke cleared. You can’t throw them around, of course, but “pyro” is simply a part of European football.

Speaking of smoke, I don’t know the official legality of smoking in European stadiums, but I know it happens a lot, especially in Italy. I’m pretty sure if you light up in England, a steward will come around and put your cig out, if not you as well.

We honestly expected more from Europe on this one, but as bad as English stadium food can be, it’s across the board better than at European stadiums. In Italy, inside the stadium, it’s basically popcorn, and in Spain it’s bags of potato chips. Fair play to Germany, though, where sausages are available just about everywhere you go.

Outside the stadium, though, I have to give the edge to Europe, where massive food trucks set up shop as part of a carnival-like scene around the grounds. Much more to choose from than sad burgers and hot dogs. 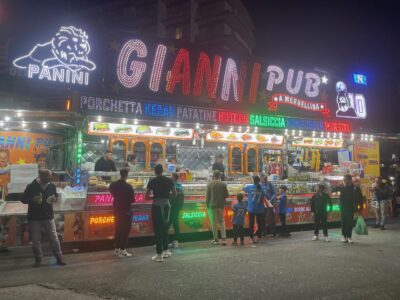 A food truck outside the stadium at Napoli.

You really can’t play a wintertime sport outdoors in England without a roof over the fans, but in Europe they do it all the time. Certainly up north I saw more roofs, but the standard in Italy and Spain, anyway, is open skies above you. If it rains, you get wet, whereas in England, when it rains (and it will), you don’t.

England seems to have decided that, along with drinking and standing, fans of opposing teams shouldn’t be allowed anywhere near each other. And this may be true. But in Europe, fans seem to mix together all the time. I was at games where, when the away team scored, people all around me jumped out of their seats and celebrated – maybe less than they would in the away end, but still. Only on two occasions did even mild tension arise from this, and in both cases the stewards told the home supporter to chill out.

I’ve been at some big derbies, like in Seville, where this wasn’t the case. But in England, if you support the away team in the home end, you are gone in minutes – probably for your own protection.

Europeans seem much more concerned about security at the turnstiles. You get frisked at almost every game, and in Italy you have to show ID matching the name on your ticket – for every game! I actually think this will become a more common thing, as it’s really to fight illegal ticket resales.

There are several moments in games where things just sound different between England and Europe:

When a shot just misses, in England the fans yell “oh” and in Europe it’s more of an “u” sound.

When one team is building an attack in Europe, fans of the other team will often whistle loudly.

In Spain, especially, when a tough tackle goes in, or a defender makes a nice play, there’s a kind of guttural “yeah” sound you’ll hear.

For a generally good play, in England it’s “Well done” or “Well in,” at least I think that’s what they’re saying. In Germany it’s Jawohl! In Spain: Bien! In Italy: Bravo!

The “sarcastic cheer” barely exists in Europe. This is when a player puts a shot 40 rows up in the seats and English fans of the opposite club let out a big “heeeeyyyy!” This barely, if ever, happens in Europe.

When a goal goes in, English fans always yell “Yeah!” In Europe it sounds more like they’re yelling “Goal,” particularly in Spain.