Looking to see a game at Borussia Dortmund? Or just want to learn more about “the BVB”? Groundhopper Soccer Guides introduces you to the club and city they call home.

Who are Borussia Dortmund?

While it’s safe to currently call Dortmund “Germany’s second team,” after the almighty Bayern Munich, for many groundhoppers it’s a more appealing destination. And that is simply because of the atmosphere. The Black and Yellows play in Germany’s largest stadium (81,000 seats) and Europe’s second-largest club stadium, and they had the world’s highest average attendance (79,000) as of 2019. Most famous of all is their 24,000-seat South Stand, known as the “Yellow Wall.” Combine all this with what is generally a youthful, attack-minded side, and seeing a game at Dortmund is high on many groundhopping to-do lists. 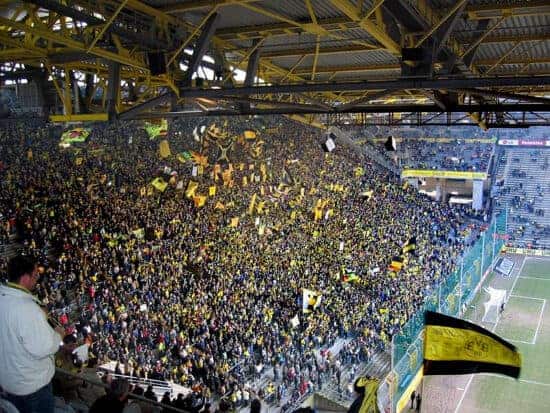 Founded in 1909, the club played in regional leagues under slightly different names until 1949, when they became Ballspiel-Verein (Sports Club) Borussia. This explains the BVB in the club crest. As for the word Borussia, it comes from an old Latin word for Prussia, a kingdom which included pieces of today’s Germany, Poland, Lithuania and Russia. So it’s kind of patriotic to use this name, which Dortmund shares with Borussia Monchengladbach and some smaller German clubs.

Dortmund won their first national championships in 1956 and 1957, won a couple more trophies in the 1960s, then were briefly relegated amid financial troubles in the 1970s. The golden years came in the 1990s, with Bundesliga titles in 1995 and 1996, then their only European Cup (now UEFA Champions League) win, 3-1 in the final over holders Juventus in Munich.

They made it back to such levels starting about 10 years ago, winning the league in 2011 and a league/cup double in 2012, all under manager Jurgen Klopp. Still, there was always Bayern to deal with; BVB lost to them in the 2013 Champions League Final at Wembley, then lost star striker Robert Lewandowski to them, as well. Since then, they’ve won another German Cup, lost three more finals (two to Bayern), lost Klopp to Liverpool, and had three second-place and one third-place league campaigns — all in seasons where Bayern won the league.

The local, Ruhr region rivalry is with Schalke 04, a matchup known as the Revierderby — revier being a simplified word referring to the area’s mining heritage. The total results after 182 matches since 1925 show Schalke with 71 wins to Dortmund’s 64 and 47 draws. Since 2010, it has leaned Dortmund’s way, with 10 wins to 5 for Schalke.

Officially known as Signal Iduna Park because an insurance company cut a check, its traditional name Westfalenstadion is, like Borussia, a reference to a Prussian province. At 81,365 capacity for league games, it’s the biggest in Germany and second-biggest club ground (after Barcelona’s) in Europe. It opened in 1974 for that year’s World Cup, it hosted group stage games that year and knockout games, including a Germany-Italy semifinal, in the 2006 World Cup. It’s most famous aspect is the south stand, the Südtribüne (South Bank), with a capacity of 24,454. It’s known as Die Gelbe Wand, meaning “The Yellow Wall.”

Check the club’s website for the latest availability and information.

Groundhopper Guides offers tickets and/or hospitality packages to home games at Borussia Dortmund. If you’re interested to find out more, just fill out the form at the bottom of this post, and we’ll be in touch!

Copa 90 has two great pieces on Borussia Dortmund, one on their rivalry with Schalke 04, and another on their youth academy. The club also made this short documentary which includes a tour of the stadium:

What to See and Do in Dortmund

Dortmund is in the western part of Germany in a very densely-populated area with cities like Cologne and Düsseldorf. The economy is former industrial and currently more research- and technology-oriented. It’s also known for large woodlands and park areas, especially Westfalenpark, one of the biggest inner-city parks in Europe, and has numerous theaters and museums. It also, like most German cities, has a large Christmas market.

Football fans visiting the area will want to check out the German Football Museum in town. Also of note is that several Bundesliga clubs are nearby: Schalke 04 (20 miles), Bayer Leverkusen (54 miles), Koln (60 miles) and Borussia Monchengladbach (61 miles). So the area would seem to be a great base for groundhopping adventures.

How to Watch the Bundesliga on TV in the U.S.

Learn more about our BVB ticket options and fill out the form below if there’s a specific game you want to see. 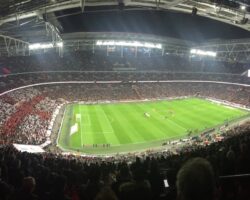