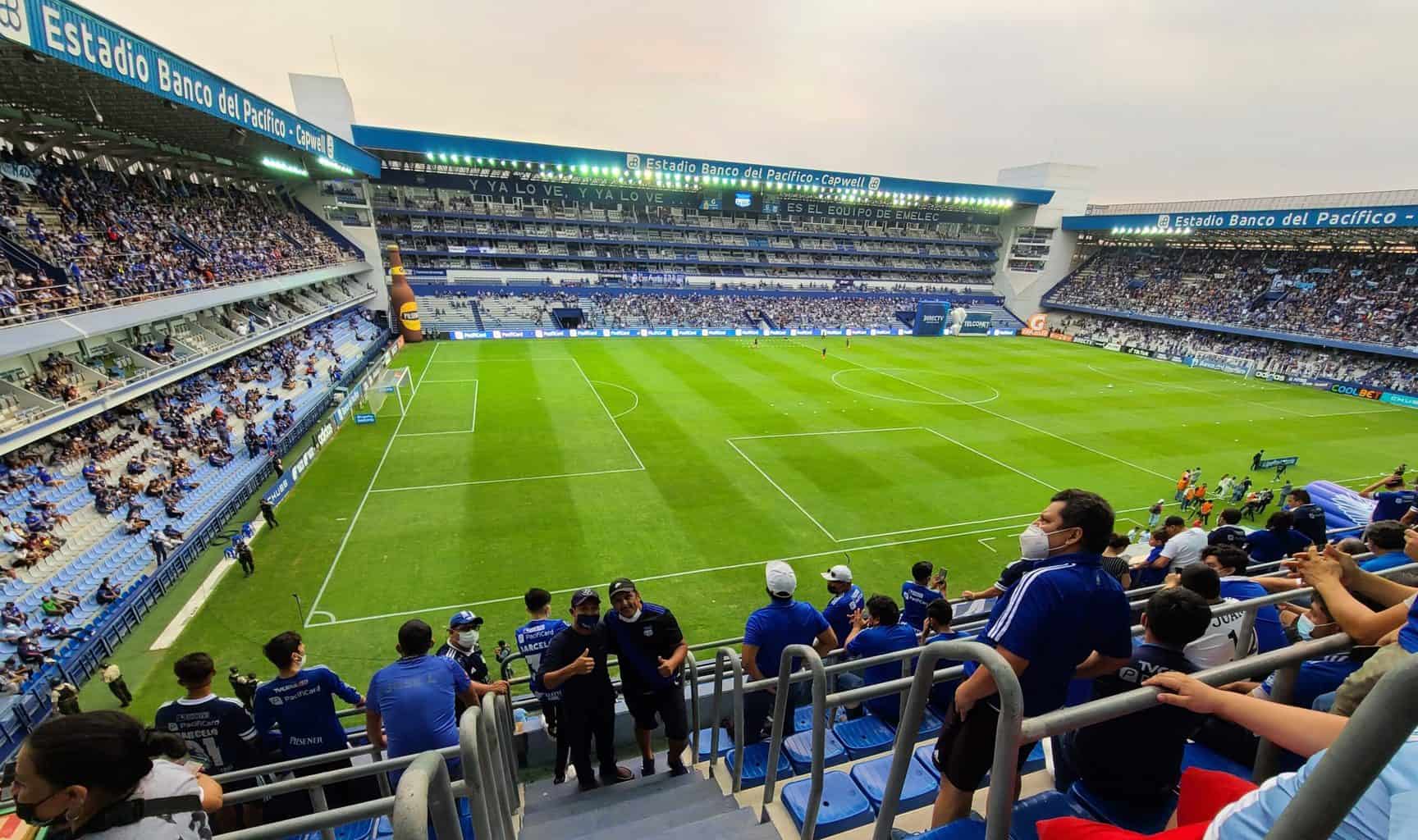 The Clásico del Astillero featuring Emelec vs Barcelona is Ecuador’s top football rivalry. Groundhopper Alethea was thrilled to get a ticket to the derby at Estadio Capwell in Guayaquil. This is her groundhopping experience.

The COE (Ecuador’s national emergency management service) only recently approved the return of spectators to LigaPro (Serie A) games, with a couple of games on October 15-16 at 30% capacity; they then approved 50% capacity for some games the following weekend, including El Clásico on Sunday, October 24, 2021.

While my husband and I are Barcelonistas (fans of Barcelona SC), we knew that the only option for attending this game was as neutrals, as no away fans were allowed. We have a friend who is a lifelong Emelecista, socio (paying member) of the club, as well as the organizer of a group of hinchas (fans). Manuel graciously agreed to introduce us to the world of Los Azules. 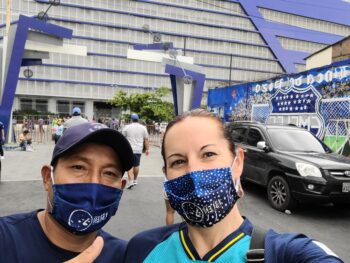 Groundhopper Alethea and her husband, Fabian, outside Emelec’s Estadio Capwell.

Club Sport Emelec was founded in 1929 by George Capwell, a sports fanatic from the U.S. who came to Ecuador to manage an electric company (Empresa Eléctrica del Ecuador, from which the club’s name is derived) in the city of Guayaquil. The primary sports played by the club, which initially consisted of employees of the electric company, were baseball (Capwell’s favorite sport), basketball, boxing, swimming, handball, and football. The latter did not become the titular sport until after the stadium was built.

In 1957, the club became the first national football champions. In Serie A history, Emelec have won 14 titles, second only to Barcelona (16 titles and current title-holders).

Emelec have also had some international success, making it to the final of the Copa Merconorte (predecessor to the Copa Sudamericana) in 2001, which they tied on aggregate but lost to Colombia’s Millonarios on penalties. They regularly feature in Copa Libertadores (28 times as of this writing) or Copa Sudamericana (10 times) tournaments, but have never won an international championship.

The club’s nicknames, El Bombillo (lightbulb) and Los Eléctricos (electricals), are due to their origins. 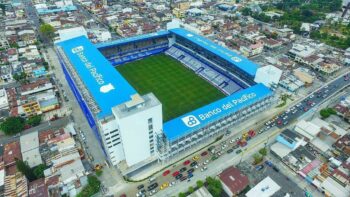 Inaugurated in October 1945 with a baseball game, the first soccer game was played at Estadio George Capwell that December. The land on which the stadium is constructed was donated by the city of Guayaquil and is abutted on all four sides by residential housing, which existed prior to the construction of the stadium.

After the 1947 Copa America competition was held exclusively at the stadium, it became the preeminent site for football games in Guayaquil. But once the Estadio Modelo opened in 1959, the Estadio George Capwell became obsolete and was closed for many years.

In the early 1980s, there was talk of replacing the stadium with a shopping center, but public outcry prevented the sale. Finally, in 1989, major renovations began, and Estadio George Capwell was reinaugurated in May 1991. Since then there have been several expansions and improvements, the last of which was completed in December 2016, bringing it to a total capacity of 40,000 spectators. It was then renamed Estadio Arena Banco del Pacífico Capwell for sponsorship reasons.

The stadium is a standard rectangle. Inside, you’ll find two tiers of seating and over 200 suites. Besides the suites, there are only a few sections of the stadium that have assigned seats; everything else is first-come, first-served.

Among the four stadiums in Guayaquil where professional football is played (all of which I have visited), Emelec’s stadium has the best location. It is located only 2 km south of the historic city center, and is easily accessible on foot, via public transit or taxi. It is squeezed into the middle of a typical mixed-use neighborhood with houses, casual restaurants, and convenience stores on all sides. Thus the pre- and post-game scene has you literally standing on the sidewalk (or someone’s front porch!), eating and drinking with the local residents and other fans. 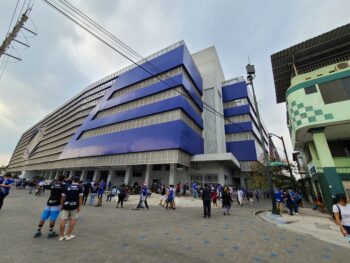 View of Estadio Capwell from the corner of Calle General Gomez and Calle Pío Montúfar showing how close the houses are.

As previously mentioned, the atmosphere immediately outside the stadium makes it a fun place to hang out before and after the game. People set up impromptu stands along the sidewalk where you can snack on a variety of food for an average of $1-2 per serving. You can buy beer and other beverages at one of the minimarkets a block from the stadium, but there will also be people walking around with a bag or backpack selling “water” which usually means they also have other options as well. 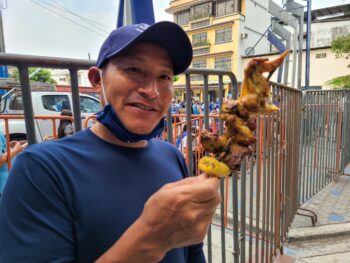 Once you enter the stadium, there is very little in the way of amenities. For example, I walked the length of each of the three tiers of the Tribuna San Martín and found only one women’s bathroom (with three stalls) compared to five men’s restrooms. The only food available was Pizza Hut personal pizzas (made offsite so not exactly hot or fresh) which came with a small side of tortilla chips & cheese dip and cost $6.00. A small soft drink cost $1.00.

As our friends had already told us they would save seats for us, we didn’t have to worry about figuring out where to sit. And, with the game still under capacity restrictions due to Covid, we weren’t concerned about arriving super early to claim the best seats. As it turns out, this could have been counter-productive anyway, as each supporter group has their unofficial seating area for every game and, if some unknowing person ends up in those seats, they are kindly asked to move.

This panorama of the Tribuna San Martin shows how close supporters are to the pitch. We sat with our friends in the first row of the second tier (above the Emelec +grande banner).

One of the great things about Estadio Capwell is how close you can get to the pitch. No matter where you sit, you have an unobscured view of all the action on the field as well as in the stands. In the past, the stadium had nets or fences to prevent people from throwing things onto the pitch, but the club essentially struck a deal with fans — good behavior means no barricades. 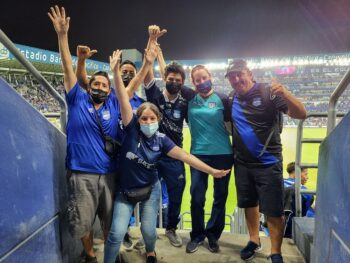 Our friend Manuel (far right), Groundhopper Alethea, and other supporters.

The historic rivalry of these two clubs dates back to 1951 after the formation of the Asociación de Fútbol del Guayas (Asoguayas), whose aim was to promote and organize professional soccer competitions for clubs based in Guayaquil. Both clubs were founding members. El Clásico del Astillero, which translates as The Shipyard Derby, has been played 286 times since then, with the results slightly favoring Barcelona (100 wins to 87 for Emelec; 99 ties). A 1973 movie called El Derecho de Los Pobres tells the fictional story of young Guayaquileños who want to go see the game, and features Alberto Spencer, one of the best Ecuadorian football players of all time.

As with most great rivalries, there has been controversy on and off the field. In 2006, a riot started by the visiting Barcelona fans caused damage to Estadio Capwell and the game had to be finished the following day without fans. In 2007, a child died after being hit by a flare before the start of El Clásico at Estadio Monumental.

This video shows some of the best goals from both sides in the 1990s. It also has some great footage of the stadiums and fan atmosphere.

Due to the pandemic, 735 days passed since El Clásico was played with spectators. For this game, 50% capacity was authorized, but it was evident to everyone in the stadium as well as those watching on TV that far more than 20,000 people were in the stands.

The overall atmosphere was fantastic. The fans were almost continuously singing or chanting throughout the game, urging the Emelec players to run faster, take more shots, etc. and taunting the Barcelona players with new-to-me insults like “[Barcelona] es una vaca lechera.” (Barcelona is a milking cow.) This particular song has a couple more lines filled with vulgarities with the takeaway being that Barcelona is a team that can be easily overpowered.

Emelec’s first goal came at the 18′ mark, but was quickly followed by a strong counter attack by Barcelona’s offense which evened the score in the 23rd minute. We barely stifled our cries of Goooolllll!

A disturbance amongst the ultras in the Boca del Pozo during halftime got out of hand early in the second half and caused the game to be stopped for over five minutes while the national police cleared out that section of the stand and removed some people in handcuffs. According to our friends, this is an ongoing turf war related to gangs/drugs and the majority of Emelec supporters would like to see these repeat offenders banned from the stadium for life. 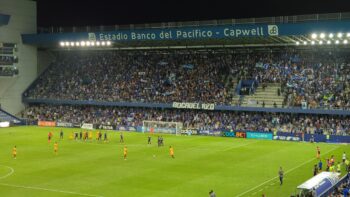 Matías Oyola takes a free kick for Barcelona during the second half. You can see the empty part of the stand where fans had to be removed.

Joao Rojas scored his second goal of the game in the 69th minute via a diving header (which I happened to catch on video); Barcelona was unable to make up the difference. The game ended 2-1, putting Emelec even closer to securing their 15th league championship.

We purchased our tickets directly from the club via official channels. In this case, Emelec shared the where-to-buy information on their social media accounts a few days before the game, and we walked to the nearest Western Union outlet to purchase tickets the minute they went on sale. The options for this game ranged from $15 (general admission in the shortside with the ultras) to $40 for the Palco General. Gomez. We paid $25 each for our seats in Tribuna San Martín.

Our tickets were sent via email within 24 hours of purchase and downloaded to my phone then scanned with an electronic barcode reader at the gate. They did not check our IDs, but did look closely at our Ecuadorian vaccination records which include our photos.