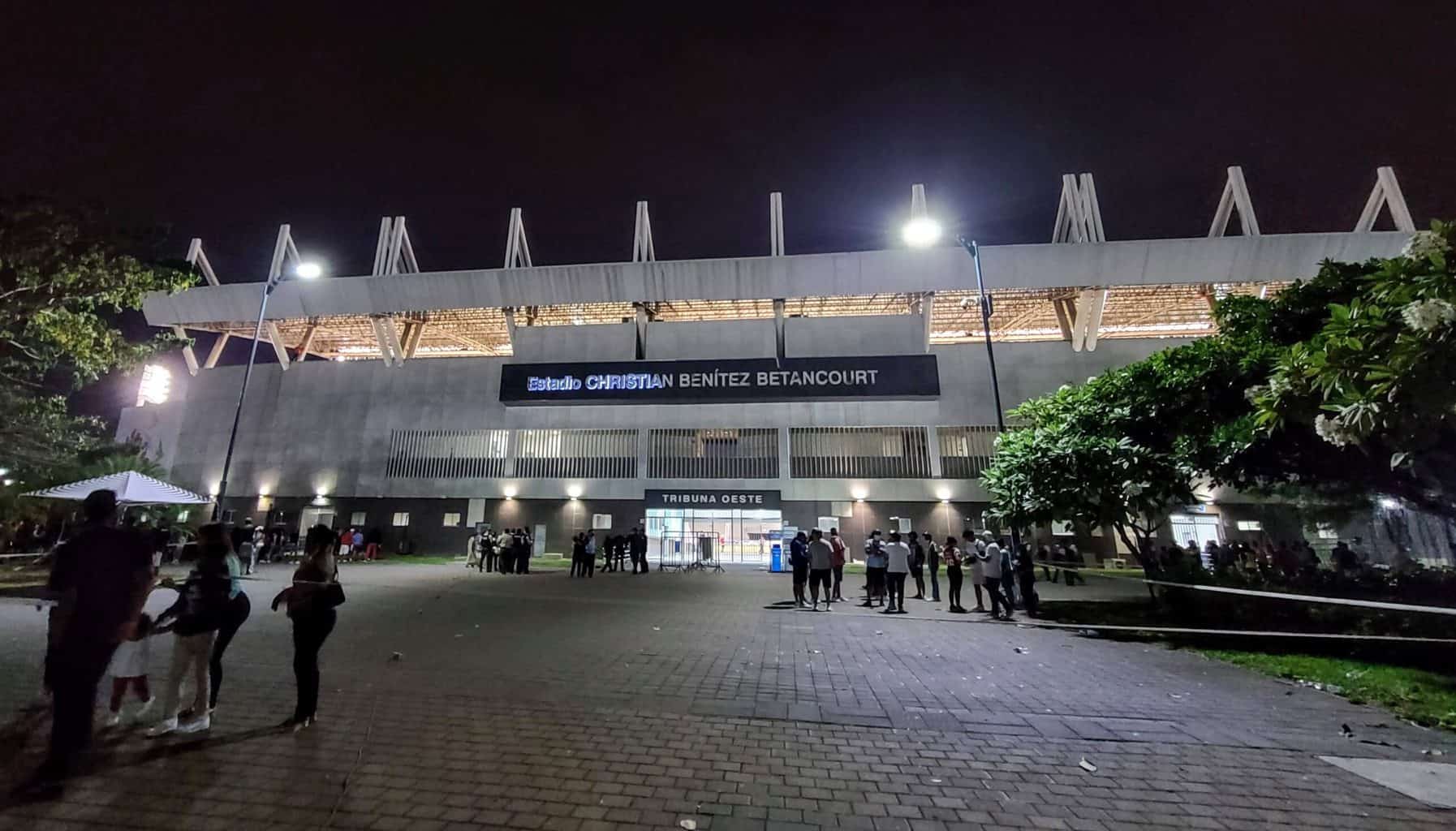 While I was excited to have the opportunity to go groundhopping at another stadium in Guayaquil, I must admit that the main reason I went to this game was not so much to see the hosts, Guayaquil City FC, but their opponents on the day, Independiente del Valle, who were at the top of the table going into this 13th game (of 15) in the second half of the LigaPro Serie A season. 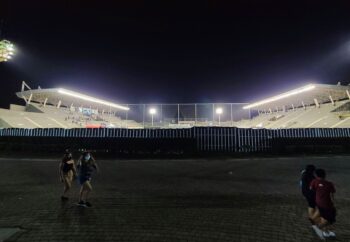 View from outside the stadium. Some fans climbed trees to watch the game from here!

Inaugurated in 2014, the stadium is named for Christian “el Chucho” Benítez, a star forward who played for the Ecuadorian national team and spent one season (2009-10) playing for Birmingham City in the English Premier League. Benítez passed away in 2013 at age 27 from a heart attack.

The stadium is located in Parque Samanes, in the north of Guayaquil. This national recreation area encompasses 851 hectares and contains 57 sports fields, and holds the distinction of being the third largest park in Latin America.

With a capacity of 10,150, Estadio Christian Benítez was the first new stadium in Guayaquil to be built without safety nets or fences. In January 2015, it hosted the first LigaPro Serie A game to be played on a synthetic pitch.

The design of the stadium is minimalist, with partially-covered seating on the longsides consisting only of poured concrete. Due to the athletic track that surrounds the pitch, which puts you quite far from the action, and the open shortsides, there is not much of an atmosphere to speak of. There are no suites or much else in the way of amenities.

The stadium is located 12 km north of the historic city center of Guayaquil. While there are public buses, they can be quite packed and, due to a recent uptick in crime, are not considered to be safe. I took an Uber from the Nueva Kennedy neighborhood a bit north of the center for a total cost of $3.30. For the return trip, I took a cab from the official taxi stand outside the park for $5.

The only attraction in the area is the Parque Samanes, which is quite nice for a long walk. There is an open air food court outside one end of the stadium where you can get a cheap meal. Surprisingly, you are allowed to bring food and non-alcoholic beverages inside as long as they weren’t in cans or glass bottles. During the game, there were vendors selling ham and cheese sandwiches ($0.50), ice cream, and even beer! 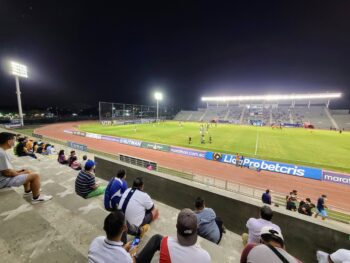 Players on the field for pregame warmup. You can see the lighted sign for the food court “El Patio” to the center left of this photo. Notice the minimalist seating.

It wasn’t a particularly exciting game with the exception of the incident below which necessitated VAR review and resulted in a yellow card for one Guayaquil City player and the expulsion of another. Both teams maintained almost equal possession (45%-55%) with a similar number of shots taken (8-10), and shots on target (2-4).

Attendance was extremely low despite the budget-friendly ticket price. This could be attributed to the 7:00 p.m. Sunday kickoff time but also to the requirement for proving Covid vaccination status or a recent negative test result. Still, the fans were quite vocal, and plenty of derogatory insults were hurled at both sides.

The stadium clearly out very quickly after the game. After stopping at the food court for a late dinner, I then continued to walk around the other (western) side of the stadium to check out a carnival that was taking place. That’s when I saw the gathering of Independiente fans waiting for the players to exit the locker room and board their bus. 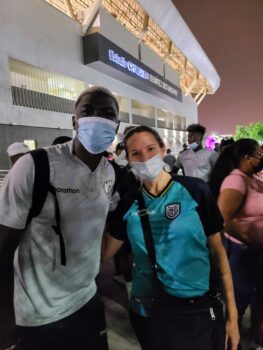 Groundhopper Alethea poses with an Independiente del Valle player after the game.

After winning this game, Independiente went on to win then tie their last two games of the season. This gave them a total of 34 points for the second round, which earned them a spot in the Final. They faced the winners of the first round, Club Sport Emelec, first in a home leg at Estadio Banco de Guayaquil in Quito on December 5, then away at Estadio George Capwell in Guayaquil on December 12. (I saw Emelec play Barcelona SC in El Clásico del Astillero at Estadio Capwell in late October.) The 3-1, 1-1 result gave Independiente an aggregate 4-2, and they were crowned LigaPro Serie A champions for the first time in the club’s history.

Guayaquil City does not have a huge fan base owing to their more recent founding in 2007, plus they did not reach the top flight until the 2015 season. We knew we would have no problem getting tickets on game day at the stadium; we paid $5 each.