Looking for Eric and the “Magical Thinking” of Football Supporters 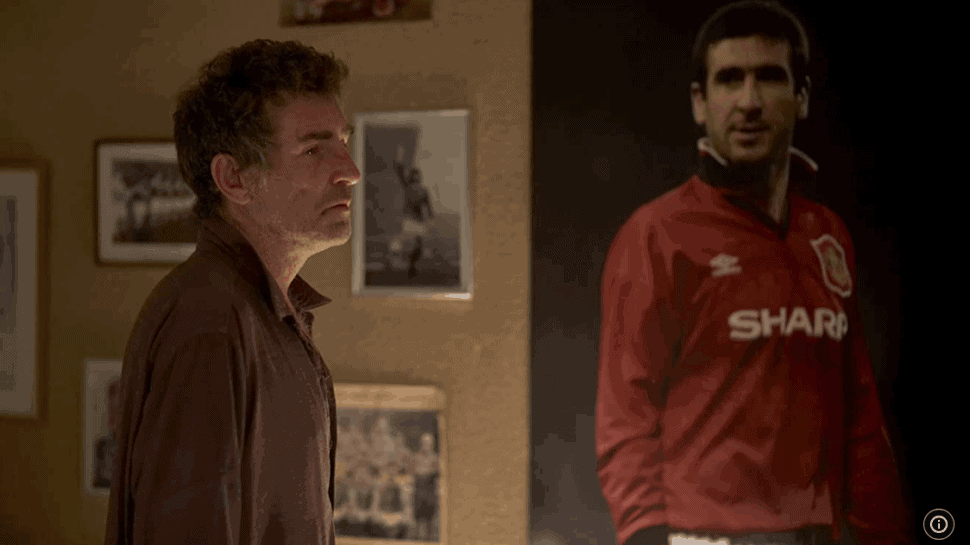 If only you were here, Eric …

As I continue to explore (and try to explain) the world of English soccer, I occasionally find out about something I feel I should have already known about. Along those lines, allow me to share with you a lovely little soccer-related 2009 film called Looking for Eric.

It was David Goldblatt who told me about it.

Goldblatt, if you don’t know, is the author of the epic, essential, supremely challenging and utterly irreplaceable history of football, The Ball is Round. If you can make it through that book, you will be up to date on the global history of the game from its earliest beginnings to about 2007. 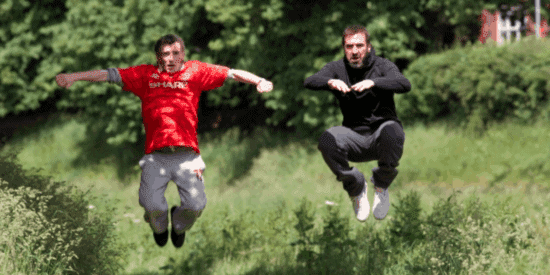 The real Eric Cantona and his understudy in Looking for Eric.

Goldblatt later came back with two more must-read volumes: a 2020 update to The Ball is Round called The Age of Football: Soccer and the 21st Century, and one from 2014 which I (ahem) just found out about and will review as soon as I’m done with it: The Game of Our Lives: The English Premier League and the Making of Modern Britain.

Goldblatt, for me, comprises the final word on how important something is in the history and culture of the sport. As an example, he lays out a history of the game in which Real Madrid winning five straight European Cups is covered in about four paragraphs out of around 1,000 pages. So if he takes time to mention something, I take note.

To wit, from The Game of Our Lives:

As with so many attempts to dramatize football, film has found it hard to compete with football’s own spontaneous capacity for narrative. … Only The Damned United, an adaptation of David Peace’s coruscating novel about Brian Clough and his time at Leeds United, and Ken Loach’s Looking for Eric have risen to the challenge. Loach’s film manages this by combining Mancunian magic realism with Ealing Comedy, gently telling the tale of a struggling post-office worker and Manchester United fan who sorts out his life with the help of a magical Eric Cantona, played by himself.

As often happens with Goldblatt, I have to keep additional browser windows open to look things up in the dictionary and/or Google; so I’ll just tell you that coruscating means, essentially, dazzling, and Ealing Comedy seems to involve some combination of luck, fantasy, and magic.

But it was that “magical realism” phrase that stuck with me. And after I tracked down Looking for Eric — I got a subscription to IFC Films to stream it, but the DVD is also on Amazon — I found it’s got magic, luck, football, fantasy (maybe?), and the real Eric Cantona. In fact, it has a lot of Eric Cantonas!

As for the magical realism, it’s more about the power of magical thinking, which might just be a way of saying “positive thinking.” Supporting a football club is an exercise in optimism and hope, but there’s also the act of emulating our heroes, maybe even imagining ourselves as them.

In the film, the “struggling postal worker” — depressed, anxious, life in crisis — wonders what a confident, talented Eric Cantona would do about his problems. Then he flips up his collar and gives it a go. That the character’s name is also Eric will lead you to wonder whom, exactly, he’s looking for.

I Also Wrote This Review of The Damned United

Goldblatt’s plot summary is sufficient, on point, and really all you need to know. You might, however, want subtitles, as the Manchester accents in the film are rather thick, and you could — as I did — miss some things. But you won’t miss the big picture, which is a guy whose life is falling apart, and so he tries a few things — suicide, meditation, weed, the usual array of modern solutions — before finally asking Man U legend Cantona, or at least a poster version of him, how he handles such things. 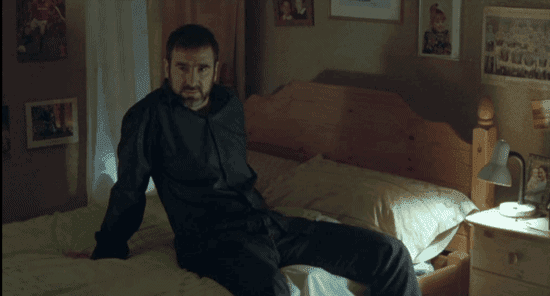 When the actual(ish) Cantona shows up in his bedroom, the magic is unleashed, and by the time he says, “I am not a man. I am Cantona!” you might, as I did, find yourself pumping your fist like a Red Devils fan in the Stretford End after The King sprung another batch of on-field magic.

Speaking of that, Looking for Eric delivers in just the right number and quality of Cantona highlights, all in front of rollicking, old-school Old Trafford crowds. But the real magic lies, as Cantona himself leads our hero to realize, with one’s teammates. Especially if they have access to weapons and booze.

As the opening line of the film says, “It all began with a beautiful pass from Eric Cantona.” When, in the end, the day is won with another assist from a crowd of Cantonas, you might just laugh along and not care what’s real, what’s right, and what’s just the magical thinking of being a football supporter. 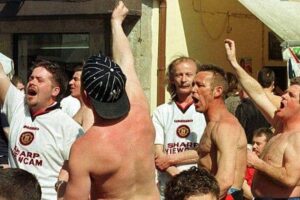 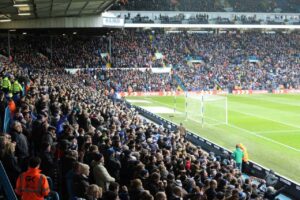