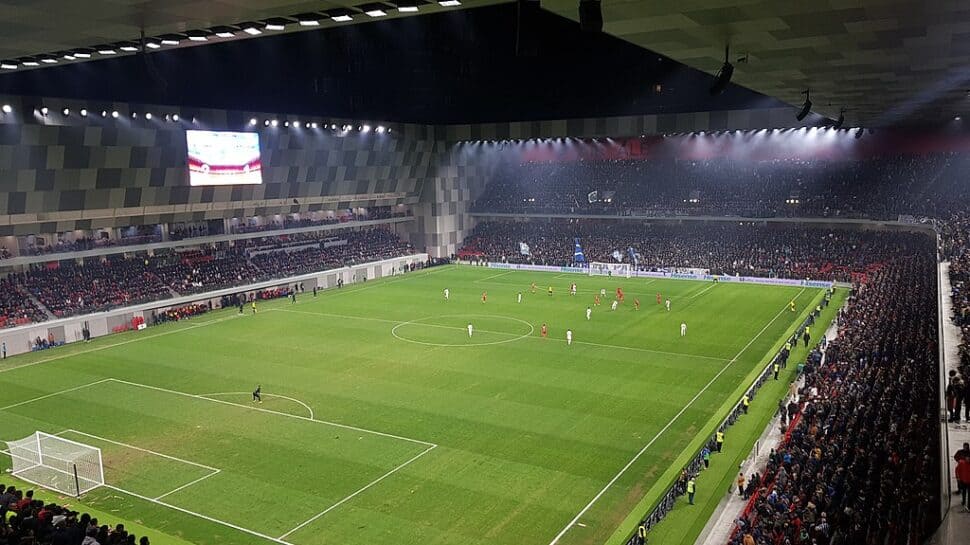 The 2021-22 UEFA Europa Conference League Final will be held at Arena Kombetare in Albania. (Photo by MercedesBenz240, CC BY-SA 4.0, via Wikimedia Commons)

In the 2021-22 season, Tottenham Hotspur was the lone Premier League club that started in the new UEFA Europa Conference League. Spurs have since been bounced out, but Leicester City dropped into it from the Europa League after group stage action.

It’s the first time since 1998-99 that there will be three major European club competitions, along with the Champions League and Europa League.

It’s the first year for the Europa Conference League.

Here’s a deep dive into the UEFA Europa Conference League.

The 2021-22 Europa Conference League ultimately includes 181 teams from 54 of the 55 UEFA member associations.

Four of Europe’s major domestic leagues will have one team each in the tournament: England (Tottenham – based on their seventh place Premier League finish last season), Germany (Union Berlin, seventh in the Bundesliga), Italy (A.S. Roma, seventh in Serie A), and France (Rennes, sixth in Ligue 1). Those four squads will come into the competition in the playoff round, which is the fourth stage of the tournament.

Spain doesn’t have an entry, because Villarreal, who would have been in this competition after finishing seventh in La Liga, actually won the Europa League last season, which gets them into this season’s Champions League. 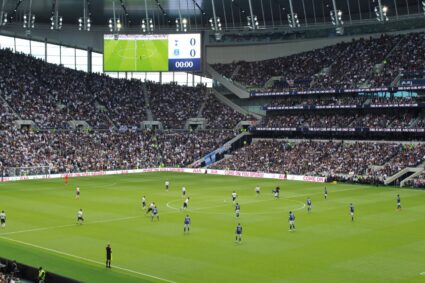 Tottenham Hotspur Stadium is playing in European games this season.

Tottenham started their tournament in the playoff round with 44 teams: 32 winners from the previous round, eight teams eliminated from the Europa League, and the three clubs from Italy, Germany and France.

Tottenham advanced past Pacos de Ferreira, who finished fifth in Portugal’s Primeira Liga last season, in a two-game series. Both teams won on their home pitch, but Tottenham advanced on goal differential after a 3-0 win in the second leg.

In the group stage draw on August 26, Tottenham were placed in Group G. The top two teams from each of the eight groups were to advance to the knockout round.

At the time Spurs’ game against Stade Rennais was postponed, it was still necessary to determine who would advance out of the group. It remains to be seen what action UEFA will take, as they must determine whether Spurs or Vitesse advance to the next round.

Knockout Stage fixtures will be played from February through May 2022.

Leicester City entered for the Playoff Round, where they beat Randers from the Danish Superliga in a two-game series. They then beat Rennes of France in the Round of 16. Next up, they have PSV Eindhoven of the Netherlands in the quarterfinals on Aprl 7 and 14.

Tottenham failed to qualify from the group stage.

The semifinals are April 28 and May 5.

The final will be held May 25, 2022 in Albania. The winner will automatically get into next season’s Europa League, unless the club qualifies for the Champions League based on their domestic league finish. 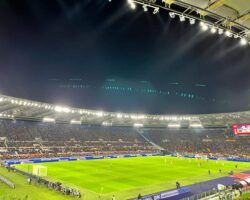 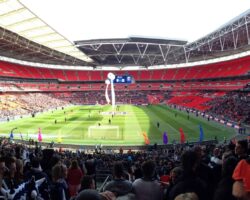