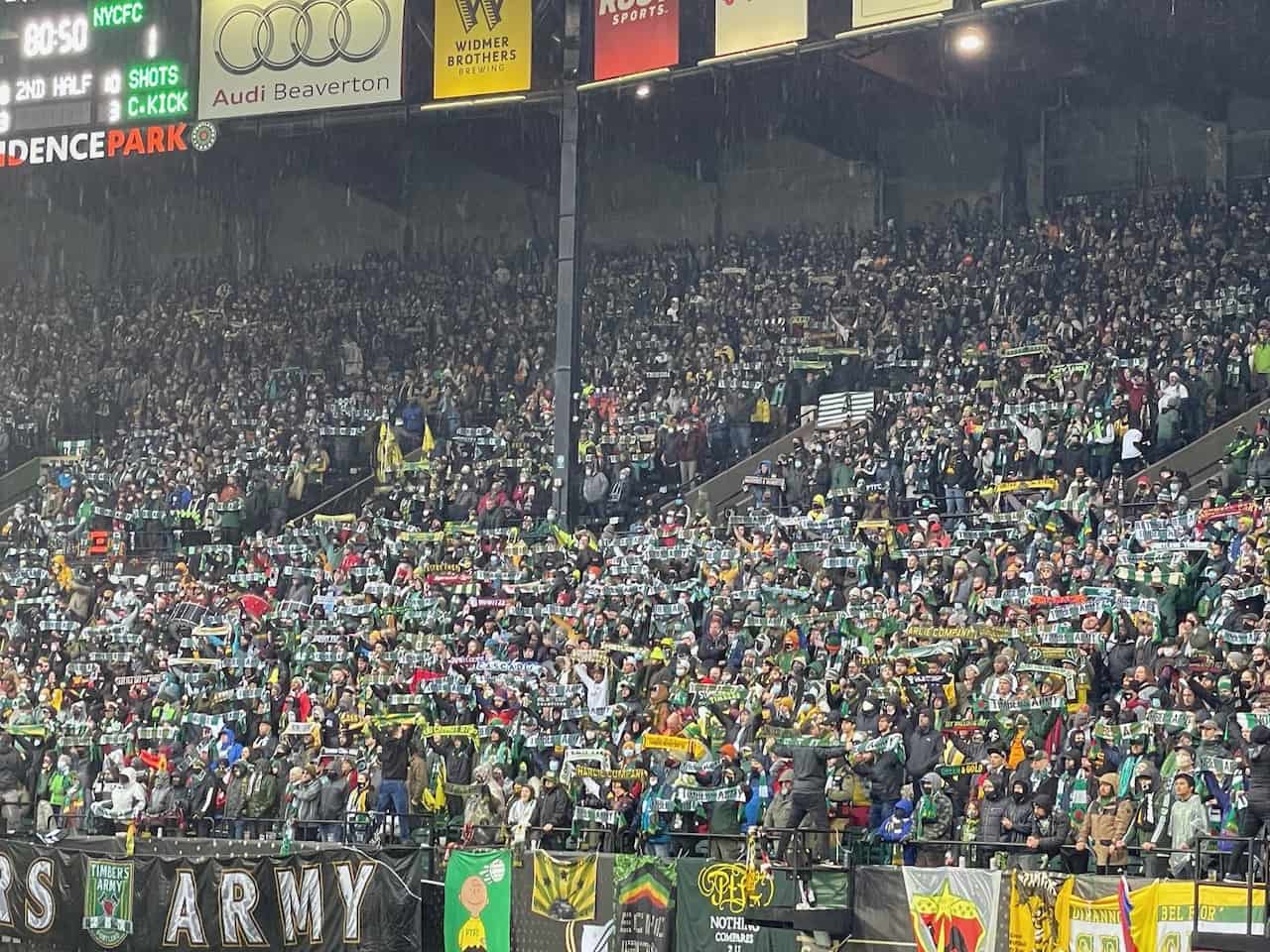 MLS Cup 2021, or Losing, Winning, and Wondering Why

What is it that makes us sports fans sign up for all the ups and downs, the emotional and financial costs, the abuse, and the exhaustion? Is it the chance at joy? It must run pretty deep, like into our DNA, because there seems no shaking it, no matter how often we say we’re done.

Maybe it’s because for millennia we humans identified ourselves by our membership in fairly small bands of people, aligned with bigger tribes, identifiable by colors, stories, songs and traditions. And we’ve lost that in our lives. So we look for it elsewhere: in nations, cities, religions, politics and stadiums.

Why else would we talk about “us” winning or losing a game? Why would we boo a player one season and then sing their name the next, simply because they changed shirts? Why would we claim to “hate” people who wear some other color? It’s madness, of course. And it can lead to some really terrible things: see religion, nationalism and politics in particular.

But sports? It’s dumb, really. “The most important non-important thing in the world,” it’s been said. But it very rarely causes us to do anything rash or destructive. It just makes us spend money we shouldn’t to travel farther than we should to see if “we” can help “our team” win a championship.

On Going to the MLS Final

It’s what kicked in, somewhere in my own DNA, in a Manchester hotel room around the time Santiago Moreno, whom I wouldn’t recognize on the street, belted in a goal from about 25 yards out on a field in Portland, Oregon, meaning “my” Timbers would host MLS Cup for the first time in “my” city. Without doing any logical, logistical or financial analysis, I simply announced to my otherwise empty hotel room, “I’m fucking going.” The tribe was gathering.

And yet sports is also a business, and the business of “my” club – which after all isn’t a club at all but a franchise owned by a Wall Street legacy kid – immediately assaulted that sense of joy. With players still dancing on the field, the greedheads upstairs announced that to get to the front of the line for tickets, you had to renew your season tickets for next season. Meanwhile, the league informed us that we wouldn’t be getting our usual season tickets, because sponsors, meaning our little band of seat siblings would be scattered elsewhere across the homeland – if we even got in.

No sense of loyalty, no consistency, no reward for longtime support, just a big corporate middle finger stuck up at our finest hour, even from people who claim to be on our side. It would get worse, watching $58 general admission tickets offered up on SeatGeek for 10 times that, because some sponsorship vulture only sees dollar signs in somebody else’s dreams coming true.

But you know what? We damn well put up with it. We’re irrational about those colors and our tribe. Oh, we call for boycotts, we send angry emails, we tweet, we boo the hell out of the league commissioner (strangely cathartic), we shout down the poor blondes the networks send out with microphones to “set the stage,” we collectively shake our fists against the darkening, money-filled sky even as it lashes us with rains of condescension. We’re insane. And then, as a theme inspired by this wonderful poem put it, we show up. For “our” boys.

The assholes in charge know this, and treat us like the addicts we are. And we comfort ourselves with the belief that someday the righteous Earth will swallow them, and we’ll get “our club” back.

And then we show up and sing like hell. And laugh like crazy when their stupid inflatable trophy literally pops on the field and slumps over like a limp dick. Honestly, just go away, league jerkoffs. We fans got the “atmosphere” thing.

Even the opponent on the day seemed Big Money Incarnate. MLS is still a place where little cities like Portland and Columbus can make it to Finals, but we all know what’s coming. Big Money is coming. Across the field from “us” that day in Portland was not so much an American team as the New York Branch of an interglobal behemoth, with endless resources and connections, and it showed on the field. “Their” team, valued at 50% more than ours, dominated and took a lead they well deserved.

And yet we sang. And we believed. Maybe not as much as before. And maybe we were starting to think “Well, at least we got here and made some noise.”

And in the end, there was time for one more attack.

The greatest moment in your sports-fan life almost always seems impossible right before it happens. Your timer says 30 seconds to go, you haven’t really sniffed a goal in the 93+ minutes before that, your season is about to end, your keeper is up the field in a sign of last-ditch desperation, and then the ball is swung in one more time, it’s headed, it’s lashed at, it’s blocked, and then it rolls in front of a guy in the right colors, the now immortal Felipe Mora, and as he swings his leg you already see it’s going in, and then everything just kind of dissolves into bliss and screaming and release and hugs and jumping.

I mean, just listen to this. Best sound in sports. So, so, so cool. pic.twitter.com/dlSLEOlSaY

Now we’ve got the bastards, all 24,000 of us felt at once. And that came from our hearts, through our lungs and out of our mouths in a 30-minute roar that none of us will forget being a part of. And “we” did have them, with our greatest hero on the field, our own sainted Diego Valeri, to surely score a goal that would make us all transform into beings of pure light. We had ‘em.

At the end of the day, the wrong color was hopping. The trophy was in the someone else’s hands. The bad guys, in both Sky Blue and corporate suits, had won after all. New York deserved it, but fuck ‘em. We had to stand there and take it.

That’s the pain that’s inherent in the system. Somebody has to lose, and penalty kicks are about the worst way to go. But in the love – because, really, isn’t that what it is? – that brought us together, against all odds and all reason, also lies the healing. “We” lost, it sucked, it always will, but we go through it together.

So we heal. We rewatch the Mora goal, or the Valeri career highlights, or Chara destroying people at 35 years old, or in hearing and feeling that Army roar. We go on Twitter, of all places, for the virtual hugging, reliving, taunting the assholes, and already looking ahead to next year.

We win, we lose, we move on. And maybe it’s not about the pain or the joy, or even the colors, but rather about the dissolving.

Paul Gerald is the founder and owner of Groundhopper Soccer Guides. And also, for better or worse, a Portland Timbers fan.