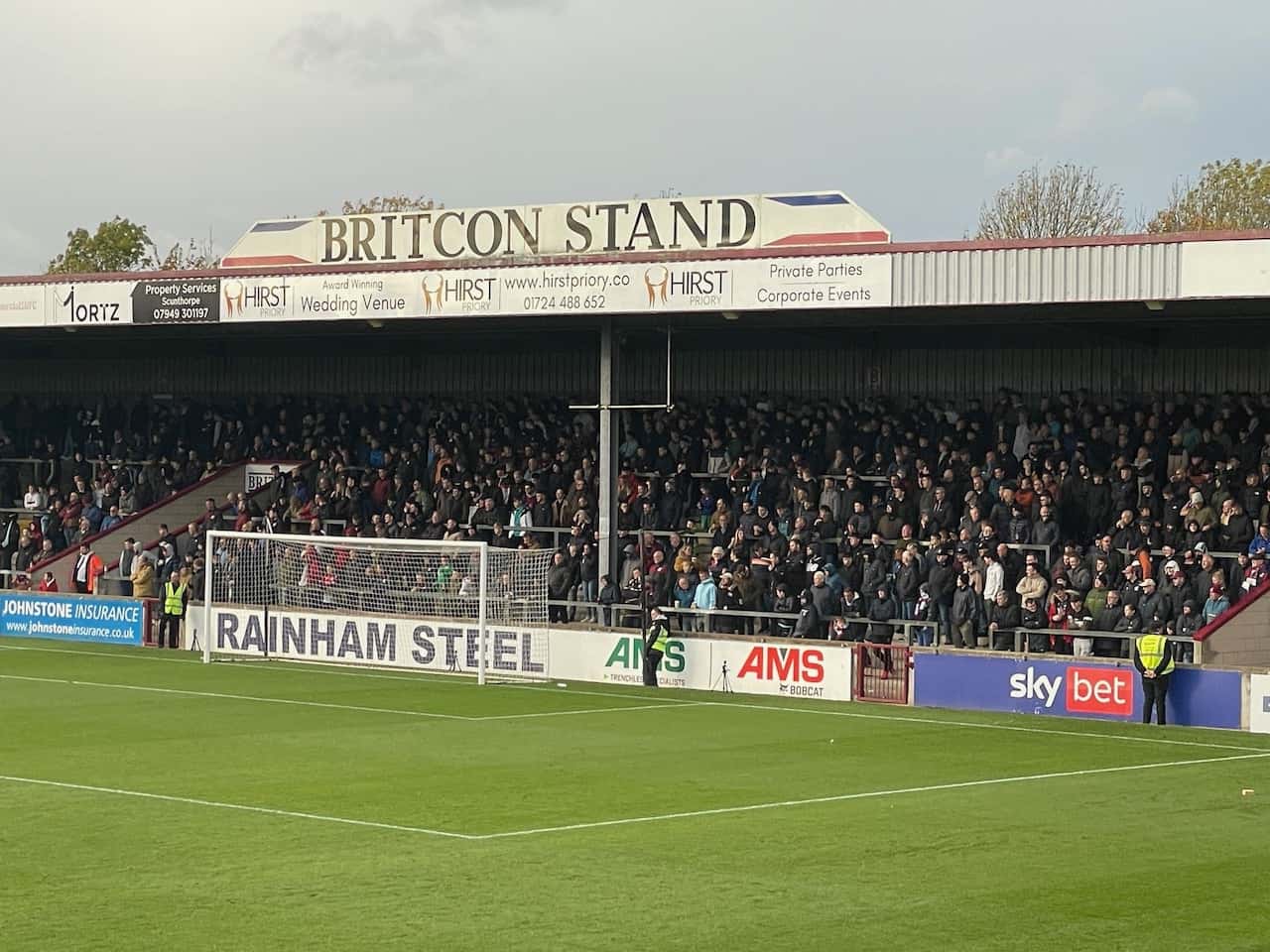 A weekend in the FA Cup brings highs, lows, drama, dullness, rain, sun, joy, and grief — plus all the stuff that happens on the pitch.

The first three rounds of the Cup are some of my favorite weekends to be in England to watch football. The First and Second Rounds, generally the first weekends of November and December, are when clubs from League One and League Two join in, so they run headlong into a bunch of hungry semi-professional and amateur clubs looking for a scalp.

Then, in early January, the Championship and Premier League clubs come in and, generally, begin to dominate. But along the way you get things like Chichester City playing a team 102 places above them in the pyramid or Tottenham Hotspur, then top of the Premier League, visiting Marine FC, a non-league outfit where recently their floodlights went out and were repaired, in part, by a player on the visiting team. I’m serious!

Thanks to @dunstonutsfc player Philip Turnbull for attempting to fix our floodlights. https://t.co/Zy2rDqKLWW

Spurs, under Jose Mourinho, played at that place in the FA Cup!

But I digress. I have just had my First Round Weekend in the 2021-22 FA Cup, so here’s a quick diary of the Saturday.

I was staying in Sheffield the night before, and several people I spoke to about this game said, “Ah, you’re off to sunny Scunny!” Of course, it came out as “sooneh scooneh” in the magnificent Yorkshire accent, but no matter. I knew as soon as they said it that it would be raining in Scunthorpe.

Still, my mood brightened when, sitting at the station in Sheffield, sipping my flat white and polishing off an almond croissant, I checked the screen and learned that my train to Scunthorpe went through Doncaster! This should be interesting. 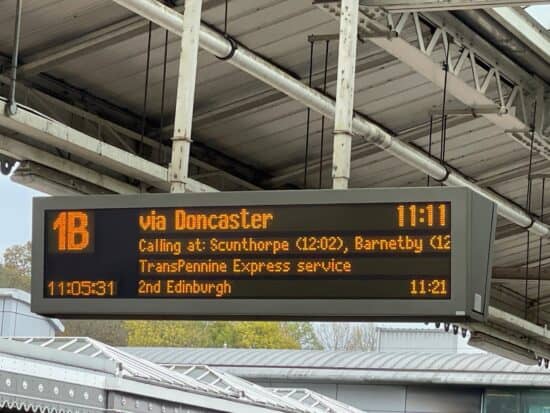 Sure enough, just a half hour shy of Sunny Scunny, we stopped in Doncaster, where I once saw Donny Rovers play, and my carriage filled up with a few dozen lads, one big loud bloke, and one smirking police officer intended to keep them all in check. 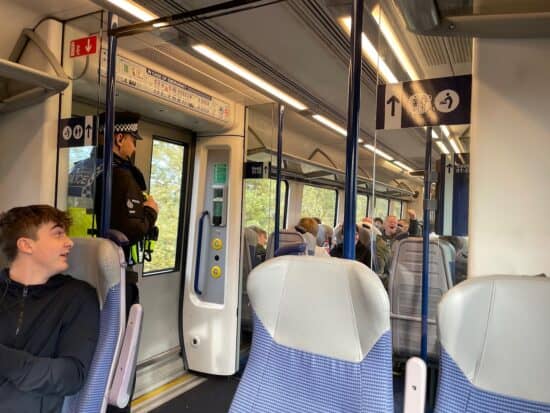 Poor Sir Loudbloke tried his best to stir up some songs, including bellowing “What the F-ing hell was that” at the Scunthorpe ground — but for the most part everyone just looked away when he started singing … whatever else he was singing. Fun as the Yorkshire accent is to listen to, it can be rather hard to decipher when it’s filtered through alcohol and blasted at high levels.

After assuring the police officer that he wasn’t drunk … yet … just stirring up a bit o’ banter, sir, he then hit on something the people wanted to sing, and the whole train took off. The cop smiled, Loudbloke was thrilled, and an older couple in the last row looked at each and shrugged.

The cops at the station were ready for the Doncaster lot, to cram them into a coach for the ground so they wouldn’t be turned loose on the poor people of Scunthorpe. I should have stuck with them. 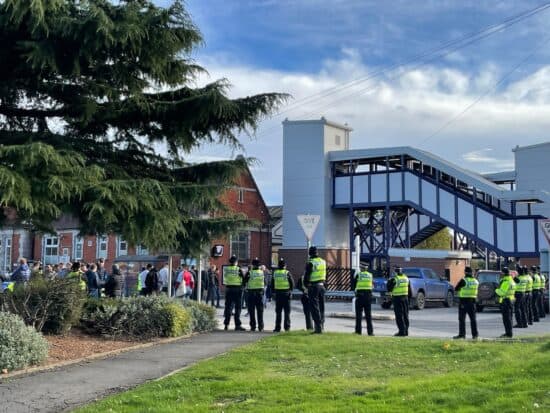 Waiting to stuff the away crowd into a coach for the ground.

I’ve been working a lot lately, and traveling a lot, and half out of my mind a lot. So it was nice, for once, to just be in town for a game, a local derby in the Cup, with no preference of outcome. I was excited for the day, and to explore Scunthorpe — although the latter didn’t take long and culminated in a decent fish and chips in the apparently mandatory “pedestrianized zone” of an English town center. 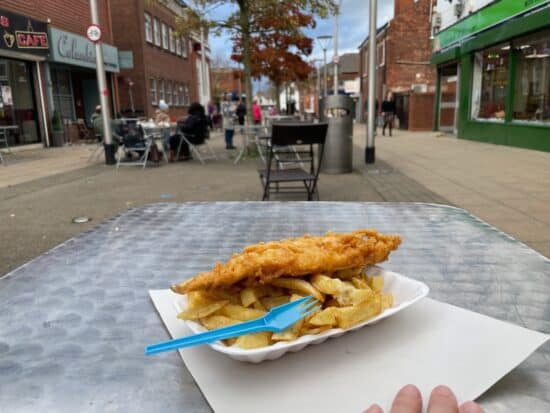 This was just before 1 p.m., and when I finished eating I made my over to a local pub to check out the scene, taking note of a taxi place across the street where I would get my ride to the game. I ordered a lemonade and commented to the bartender that it wasn’t very busy for a game day.

“Why did it clear out,” I asked, in the last truly pleasant moment of my day.

See, when I bought the ticket, I was in Italy, and the game was duly noted on my calendar as 2 p.m. And there it stuck in my fool head: 2 p.m. Only the game wasn’t in actually sunny Florence; it was in rapidly clouding Scunny.

I ran across the street to the taxi place, banged on the window, and when someone appeared I requested a taxi.

“Sorry luv,” she said, “haven’t got any right now. They’re all at the football.”

I ran to the bus stop and saw one leaving. A quick check of Google Maps told me … yep, that was my bus. Double f-ing hell.

Thus did I walk 40 minutes to the ground, missing the entire first half. And yes, it started raining. Lightly, but this story would have been incomplete without at least that. 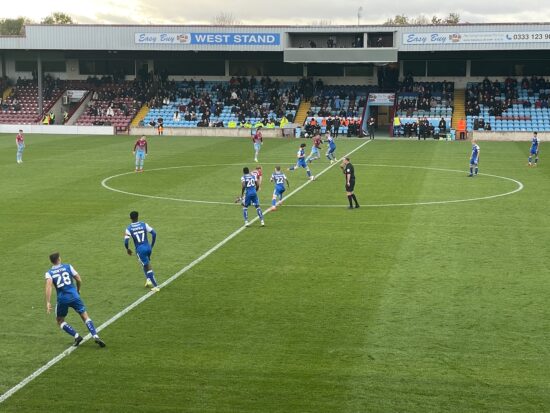 Kickoff! Of the second half, but still.

By the time I got there — and I’ll spare you the ugly internal details of that walk — I learned I had missed an own goal and Scunthorpe trailed at the break. I arrived, just in time to hear the referee’s whistle and a chorus of boos emanate from the ground, then I showed my ticket to a steward and asked him where I was meant to go in. He said he didn’t know.

I should pause here and say that a theme of my current trip is simply this: People don’t know things. All the time I encounter people whose job, one would think, is to know certain things which they turn out to not, in fact, know.

He pointed me to “the bald guy with the radio,” who banged on a door of the stadium to have it opened, then delivered me to a steward inside — who looked at my ticket and told me I was supposed to be on the other side.

I went back out and started walking around, and soon found myself between the ground and some woods, surrounded by people drinking and smoking — the away lot. I literally could have just walked right into the ground at that point, but I had heard their end was packed, and besides, I would rather see the away fans than be among them, at least on this day.

So I found the right stand, banged on the door, was let in, and quickly realized none of this mattered. Scunthorpe, you see, are bottom of League Two, facing relegation out of the Football League, and the place was half full, Cup prices and local derby be damned. It ain’t sunny in Scunny these days. 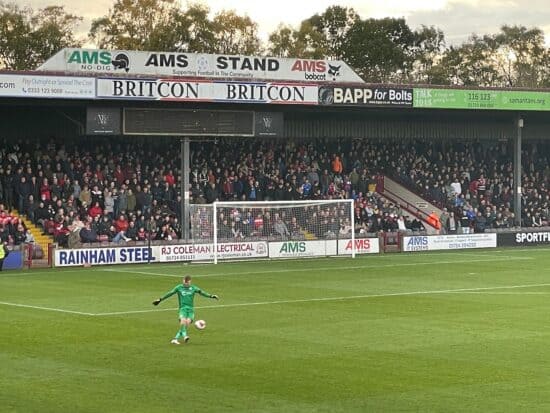 Free kick in front of the away end.

What do I remember of the game? Um, it ended 1-0 to the away team, and even they could hardly muster a cheer when it was over. They advanced in the cup, that’s all. I remember the goal post denied Scunthorpe scoring another own goal; a good summary of the day, in fact.

I also remember that when the final whistle blew, I let my row clear out, nodded politely when an older and clearly disgusted gentleman said something I understood not one word of but grasped entirely, and then tried to record a video for our Groundhopper Guides YouTube channel. I did one 45-second clip, looked around, and the place was empty. It was surreal. I have never seen a place clear out that fast. Even the away lot were gone. 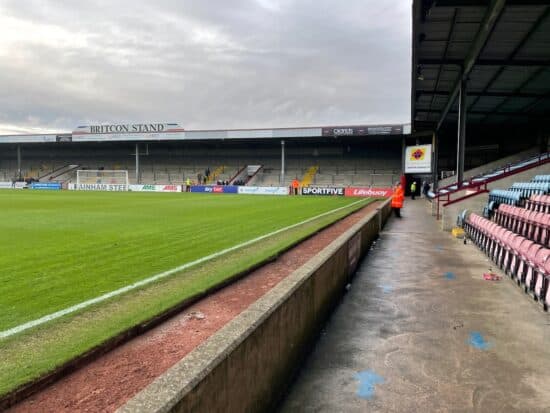 I took this photo about five minutes after the final whistle.

I also remember that I ignited a small tempest in the teapot of #groundhopping, because I asked a Facebook group of groundhoppers if seeing only the second half of a game because you’re an idiot — not because you saw half of one game and then ran over to see half of another, so you could tick off two grounds in a day — would still count as seeing a game there? I got responses ranging from “of course” to “of course not” to “did you see any of the first half?” to “did you see a goal” to “I count preseason reserve-team games” to “what is the matter with everyone?” That last one might have been me, actually.

And then I decided I was absolutely counting it, because (A) I got a badge, just as the club shop was closing, and (B) otherwise I would have to come back. Maybe Scunthorpe will go down to non-league and I won’t have to worry about it next season?

Sorry, Scunny lot! I saw you win at Grimsby Town, you know. 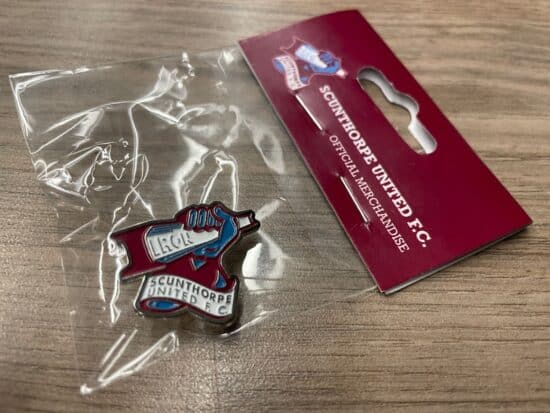 See, I was there!

So Doncaster moved on — to face Mansfield Town at home in the Second Round, it would turn out. Scunthorpe moved on to a draw in the league with Salford City. I moved on to arrive at the train station just in time to see my Sheffield train pull out, then realized it was an hour until the next one and the station bathrooms were locked. Because of course they were.

Also, a funny thing happened in Scunthorpe. Funnier than some clown from Oregon not realizing the kickoff time of a game when he had a ticket to said game in his bloody pocket.

No, Scunthorpe hosted Doncaster again! This one was on the following Tuesday, in the Football League Trophy, and Doncaster won again, this time 3-2. Because, first, of course I would miss the one (own) goal in a game where the BBC said “Neither side were able to find the quality to match their endeavour.” Not only that, but of course the same two teams would play a five-goal thriller three days later in the same place, while I was working in some hotel in some even more rainy place.

The FA Cup is where dreams are made and magic happens. Sadly, it also produces days like I had in Scunthorpe.