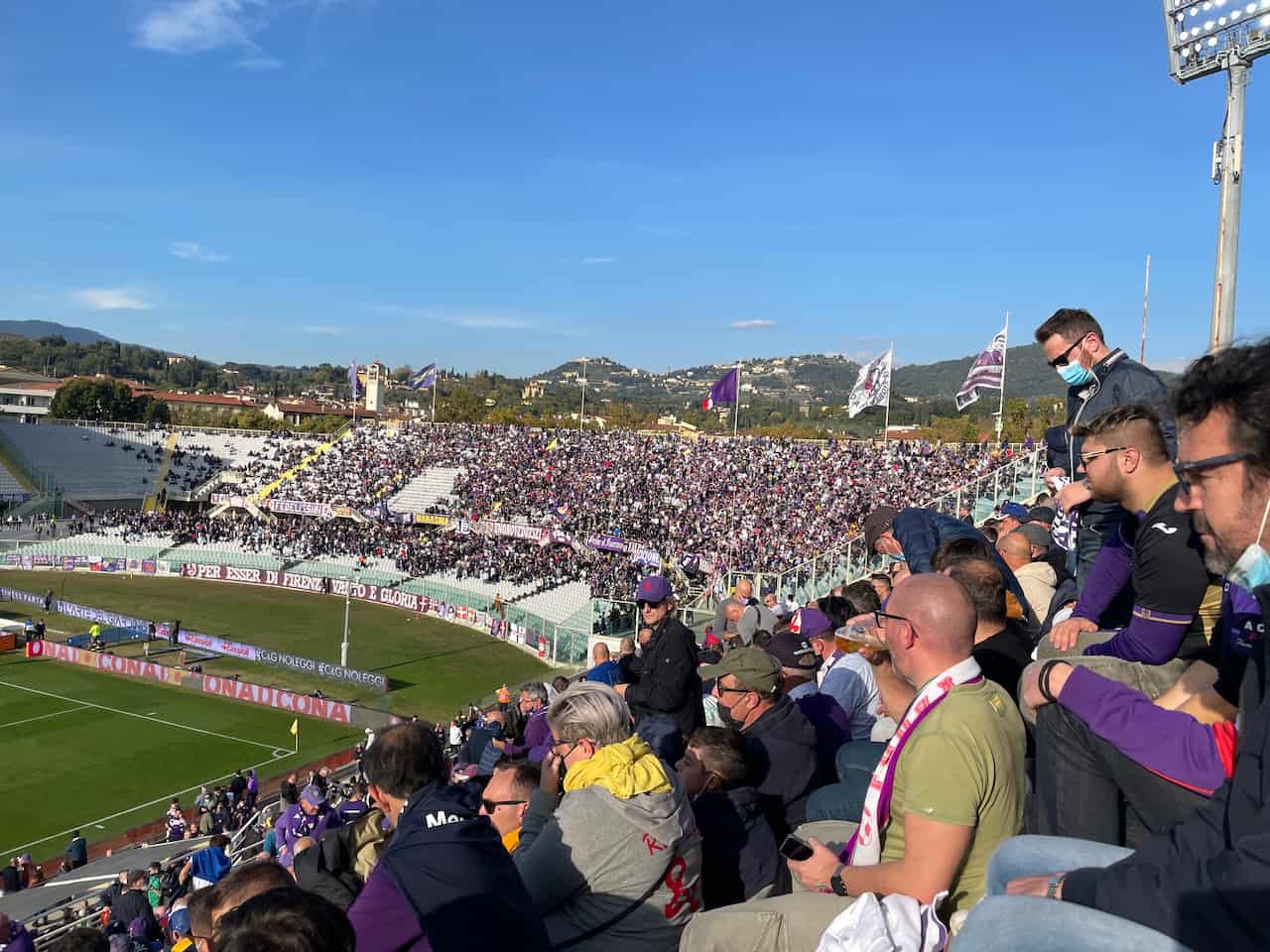 Seeing a soccer game at Fiorentina is a step back in time, an affordable glimpse of Serie A football, and a way to experience the real Florence beyond its tourist center.

Millions of people visit Florence, Italy, every year — as well they should. With its art, history, architecture and food, Florence is a must-see place on the tourist circuit.

But just a 30-minute walk from the super-crowded tourist center is a 1930s-era stadium in a residential neighborhood, where every other Sunday afternoon, tens of thousands of locals gather to support the Viola, or Purple. It’s a reminder that Florence’s history didn’t stop in the 16th century, and that even in a city famous for its past, football — or calcio, as they call it here — still brings people together.

Fiorentina emerged in 1926 after several clubs had come and gone over the previous 30 years, and to remain strong, the last two standing merged to form the current one. Originally, they wore red and white, the traditional colors of the city, but a washing error created purple shirts, the fans liked them, and so to this day Fiorentina are one of just a handful of clubs in world soccer to have purple as their primary color. Orlando City in MLS are said to have drawn inspiration from them.

They won their first trophy, the domestic Coppa Italia, in 1940, then glory days came in the 1950s. The league was won for the first time in 1956, then after four straight second-place finishes, Fiorentina won the Coppa again in 1961, then they added that year’s European Cup Winner’s Cup (basically today’s Europa League) as well as a runner-up finish there the following year.

They won the league again in 1969, then faded from big-time competition, not lifting another trophy until the Coppa in 1996 and 2001. But underneath that success, financial trouble loomed, and within a year the club was relegated, then bankrupt. Local leaders revived it, but had to restart in the fourth tier for the 2002-2003 season.

Their championship there, combined with changes in the league structure, meant they then skipped to Serie B at the second tier. Remarkably, two years later they were back in Serie A and playing in the Europa League, and over the last 20 years that has been basically who they are on the pitch: a solid Serie A team which occasionally has a decent run in Europe but doesn’t win anything.

In today’s world of big money equaling success in football, Fiorentina are a bit like an Italian West Ham: a big and historic club with a large following that just doesn’t have the muscle to keep enough top players long enough to win anything and still plays in their original stadium. But it’s a seriously fun place to see a game — and it’s in Florence! 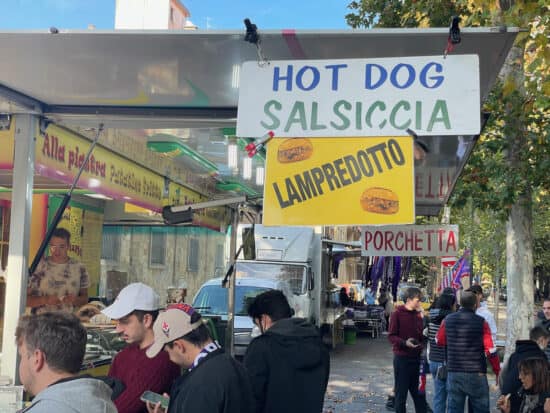 Feeling adventurous? Get the lampredotto!

The simplest way to get to Fiorentina’s stadium is to walk; it’s just over a mile from the city’s historic center, a flat, ever-more-purple stroll through safe streets, where closer to the stadium you’ll start to see street vendors selling food. But whereas in England you’ll see burgers and maybe fish and chips, here it’s a spicy sausage called salsiccia or, for the more adventurous and tradition-following, lampredotto, a sandwich “made from the fourth and final stomach of a cow,” according to Wikipedia. The salsiccia was excellent. 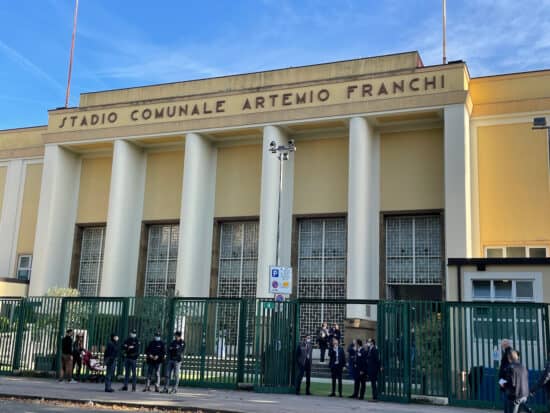 It’s not exactly glamorous, but it’s been home to Fiorentina for 90 years.

Fiorentina’s home since 1931 has apparently not changed much in that time. It is oval-shaped because it once had a running track, so each end is, by modern standards, a rather long way from the pitch. But the view of the action from the sides is excellent, and if you’re high enough, the view of the surrounding hills is exquisite.

The most famous aspect of the stadium is the 230-foot “Tower of Marathon,” officially the flagstaff but, to my eyes, a giant phallus left over from fascist days. 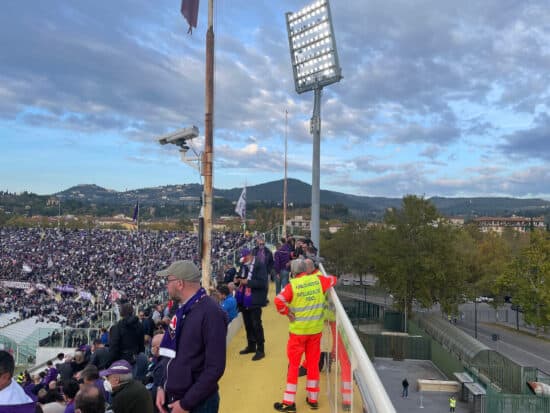 Football with a view: from the top of the Artemio Franchi.

Capacity is just over 43,000, and the action is in the Curva (or end) Fiesole, named for the nearby hilltop town of Fiesole. In that curva, the ultras will be bouncing, singing and waving flags throughout the game. If you want in on the fun, go sit there; if you want to see the game, pick something on the side. When I was there it was 35 Euro for uncovered seats on one side — fortunately, it doesn’t rain much in Florence — and 80 Euro and up for covered seats on the other side.

Away fans, also eternally flag waving, are encased in a glass cage all by themselves in another corner. 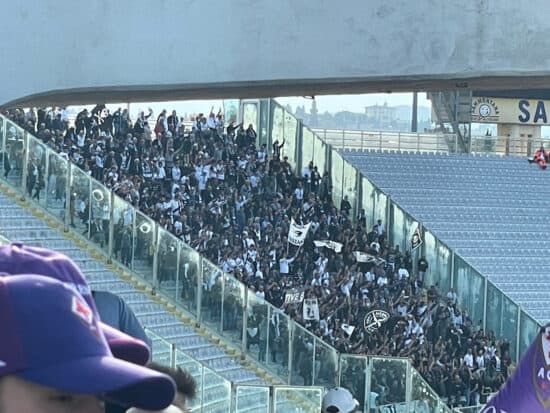 The poor Spezie folks were all by themselves in the glassed-in corner.

Artemio Franchi was a Florentine president of the Italian Football Association and UEFA; the stadium at Siena is also named for him.

There was talk, after an American took over the club, of replacing the stadium, but imagine trying to build something in Florence, of all places! Now there’s talk of rebuilding to bring the ends in closer, but in Italy there is often much talk and little action. Meanwhile, it’s pretty clear no one is spending any money on the place. 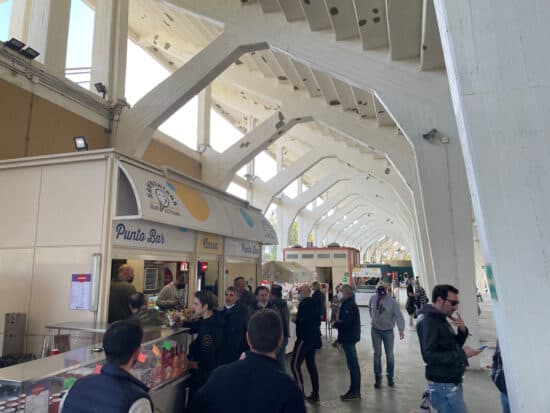 Popcorn and ice cream, anyone?

I was there for a Serie A game on Halloween in 2021. The opponent was Spezia, from a coastal town to the west, in Liguria, probably best known to foreigners as the place where one changes trains on the way to the Cinque Terre. This was only their second season ever in Serie A — the first was last year — so an easy win for the home side was expected.

However, especially with Juventus losing to Verona the day before, every local person I spoke to begged me not to express any such confidence. If you want to get to know a local place, do one of two things: Go to an AA meeting (they have them in English all over Europe) or ask somebody like your hotel clerk or waiter or cab driver about the local soccer team. As it is in Manchester, so it is in Florence, and everywhere else! 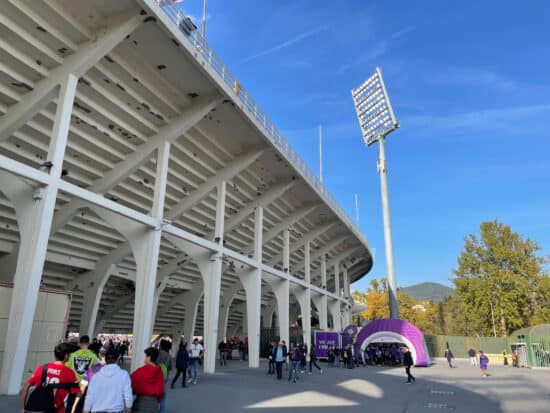 Fiorentina did romp, 3-0, on a hat trick (in Italian it’s a tripletta) by a 22-year-old Serb named Dušan Vlahović whom everyone — and I mean everyone, from the cabbie to the waiter to the clerk — assured me would not be playing for Fiorentina next year. Such is life in the second tier of the top tier: Find or develop a top young player? Great, but you don’t get to keep him. Everyone agreed that they just want him to leave Italy, and both Man City and Spurs have been “linked.”

Their second goal, which settled things, was a thing of such perfectly built magic that by the time it got to the big Serb, I had already gasped openly three times. Fiorentina, as one local told me, “play some lovely stuff,” so when they get to relax and do their thing against an overmatched club just trying to stay up, it’s a sight to behold.

Here are the highlights, which for me don’t show enough of the second goal.

I thought the best player on the pitch was Fiorentina’s #8, Riccardo Sapponara, and every local person I said this to had the same twofold reaction: impressed that an American would pick up on the silky ways of an attacking midfielder, and then insistent that but for injuries, his age (29) and his head not being right, he also would have left long ago.

For me, as always, the fun was in the stands.

There are two great schools of supporter culture in the world, what we might call the Spontaneous Occasional and the Organized Constant. England is the greatest purveyor of the former, with chants and songs emanating from who knows where but all at once, and tied to what’s happening on the field. 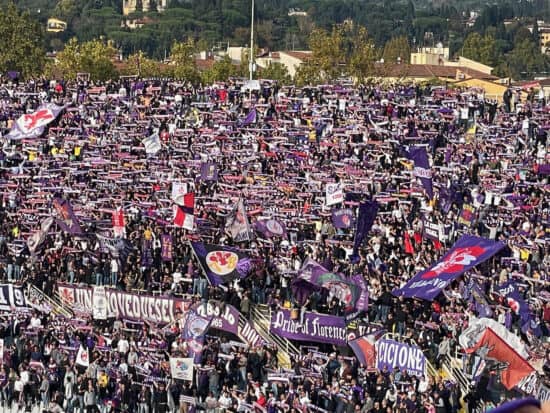 Italy, much of Europe, all of South America, and the US are of the other school, wherein a group of leaders call out a song and thousands of people behind a goal sing it for a while, often while waving flags and jumping. This is the Curva Fiesole, a writhing, purple, bouncing and occasionally shirtless carnival that only takes a break for halftime.

Italy also has club anthems, and Fiorentina has one of the oldest. Now known simply as “Oh Fiorentina,” it was actually written by a 12-year-old (!) in 1930, but the version you hear now was recorded in 1965 by Narciso Parigi, who later acquired the rights and donated them to the Fiorentina supporters association.

At one point in each half, the curva started a song to the tune of Bella Ciao, an old anti-fascist song from the 30s. The whole crowd joined in and started bouncing, and while they weren’t singing the original lyrics, I thought I might be involved in a real, live political and historical moment.

The next day I played a recording of it for a cab driver, and he said, “No, they’re singing that if you aren’t bouncing, you’re a Juventus fan.”

A final note on seeing a game at Fiorentina: the food and drink. You can drink in your seats, which explains why many Brits go groundhopping in Europe, but the food at the Franchi seems to consist mainly of popcorn and ice cream. In Florence!

Just another sign that, if you like your football old-fashioned, sunny, and filled with flag waving and singing, drop 35 Euro sometime for a ticket to Fiorentina. 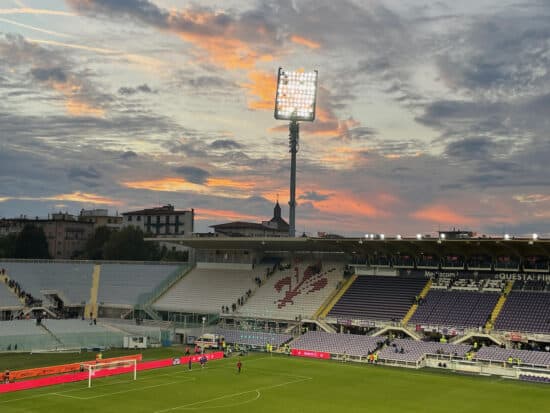 Three points in the bag ; let’s go get dinner and some gelato in Florence!

Where to begin? I have spent a fair amount of time in Florence, because I used to lead hiking tours in the countryside around there and still have good friends in Chianti, but all I can tell you is that a few days in Florence are a must in one’s lifetime. I like the Hotel Silla just across the river, and I suggest going during the not-summer, when the crowds and heat combine to make it something other than pleasant.