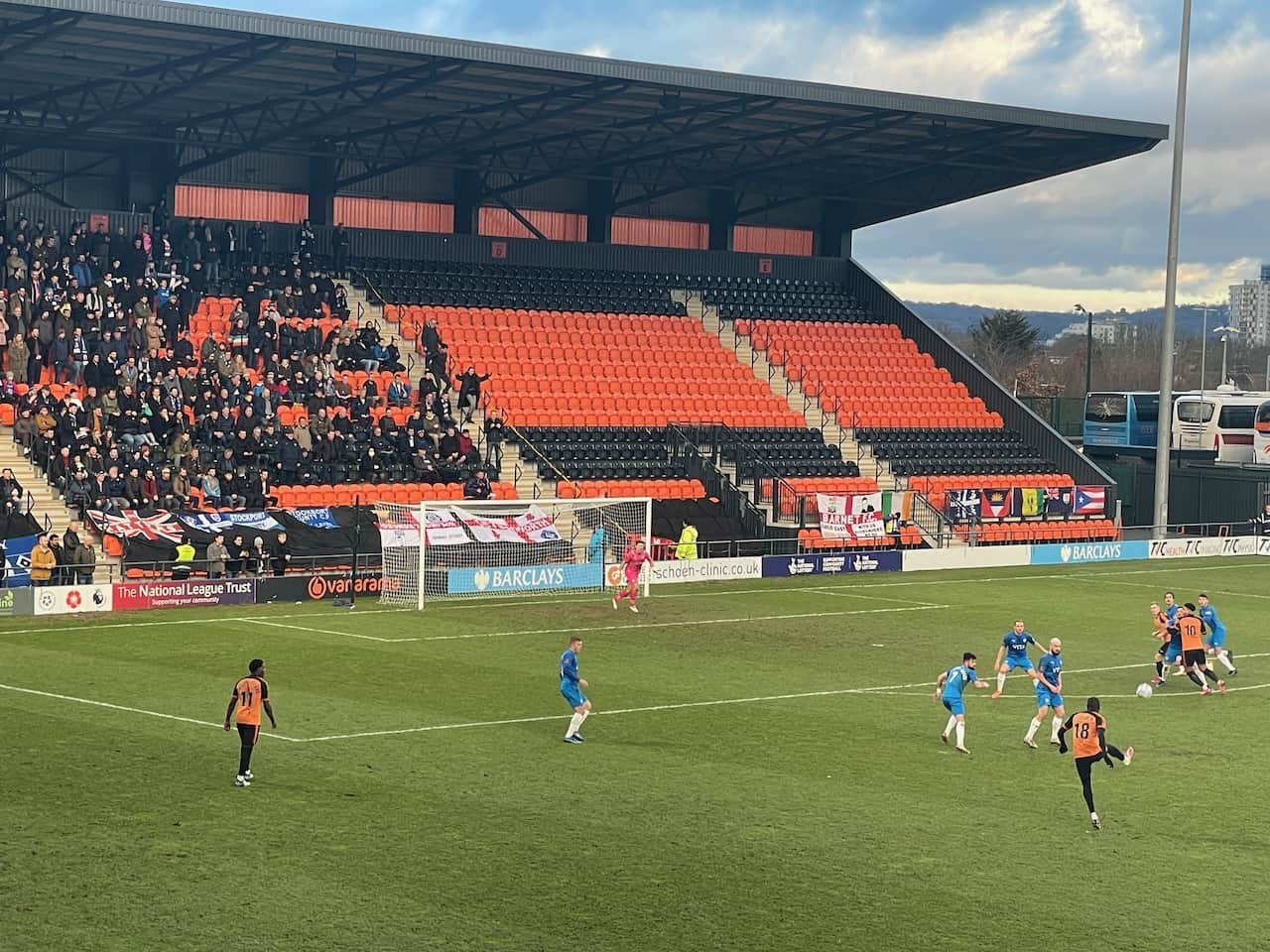 Back to Barnet FC

Heading into injury time at Barnet FC, with the home team down 3-0, I found myself thinking about curses.

There were plenty of them around, since I was in the home section; they were aimed at their own players, the result, the referee, Barnet Football Club’s owner, the soccer gods, really just the whole world. Particular curses were being aimed at a Barnet player whose young and uninspiring career, the crowd had by then decided, only existed because his dad was a manager someplace. Even in a team down 3-0 at home – oops, now 4-0 – he stood out in his shakiness. 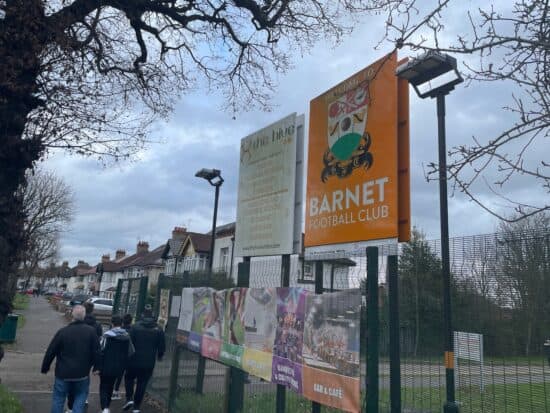 I was having some flashbacks at this point.

I was thinking of bigger curses, though, like my own dark magic at Barnet Football Club. The first time I came was the only time I had ever left a game at halftime, such was the weather and the game, which I had realized on the way there wasn’t even a league game, wasn’t against the visiting team’s senior squad, and literally had nothing competitive riding on it. I came to call it My Non-Game at Barnet. I then spent the night in the worst AirBnB of my life and woke up to find out that Donald Trump had been elected President.

My Hopeful Return to Barnet FC

So I had come back to The Hive, the Barnet stadium, at the tail end of another pretty rough spell, seeking some kind of positive result. Or at least to stay for the whole game. 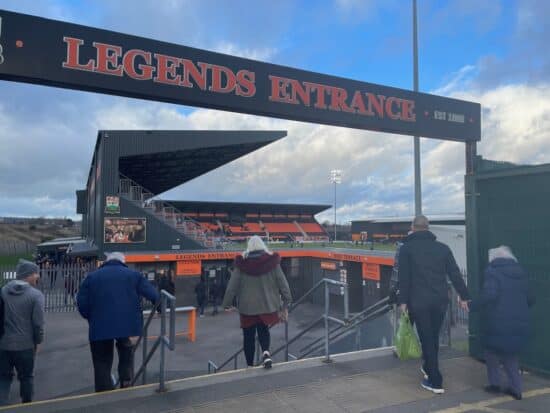 This seemed more promising than the last time.

In the year before this return visit, I had hatched a tremendous plan to finish off the 92 Football League clubs, tour Europe for a few months building my business, return to the States to spend the summer in the Rocky Mountains and then return, triumphantly, for more groundhopping glory. As they say, though, “we plan and God laughs.” In this case, Covid sneered, and by the time I was back at Barnet FC, I had been reduced to fleeing for home four months early to drive a taxi, still 16 clubs short of the 92, with a debt-laden and money-losing company that now had two fewer employees.

I glanced at the schedule, saw that Barnet was at home on one of my last nights, and thought, Well, at least I can go up there and check them off the list. They’re down in the National League now, but I had unfinished business at The Hive, home of the Bees.

Visiting The Hive in London

The thing is, every trip to a football ground is a chance for something special to happen. Or at least something pleasant. Or not. I would usually settle, gladly, for a fun game and somebody to talk to. In this case, at least it was sunny(ish), and while Barnet had been relegated to the National League since I was there, this was still a league game. And they had spent some money on the ground, which was nice. Still no pin badges, which I guess means I have to come back yet again, but at least there’s a club shop now, and a bar. 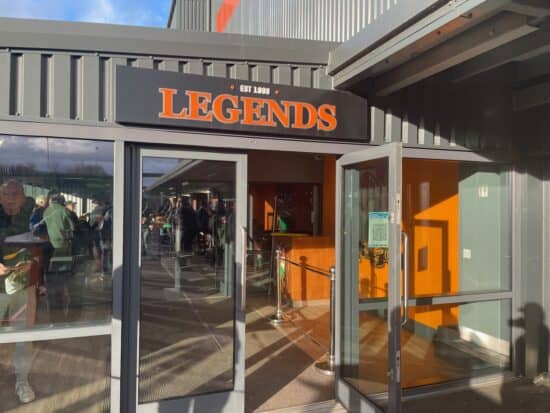 Well, this is definitely an improvement!

What they also had was a visiting team, Stockport County, that was making a mockery of the league. Their new owner cleared the debts in 2020, bought a bunch of fine players, and hired a young manager with several promotions and cups already on his resumé. By the time I bumped into them at Barnet, they had already knocked Bolton out of the FA Cup, were top of the league with breathing room, and managers around the league were saying they were one of the best teams to ever play in the Fifth Tier. 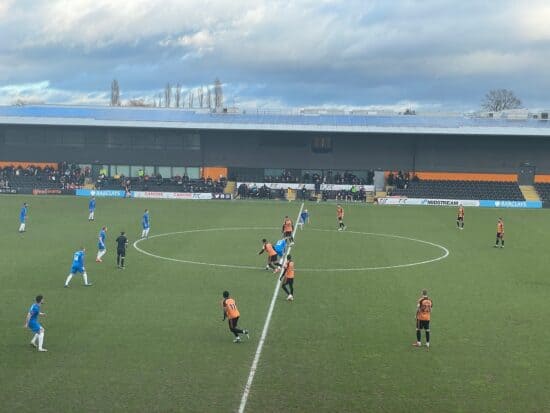 Beginning of a beatdown.

As they scored their fifth goal in about the 93rd minute, I was left to reflect on what might have been. I might have broken a sorry string of poor home-team results during this trip; I saw 11 home wins in 33 games. Nope, it finished 0-5. I might have gotten that pin badge; nope, the Stockport fans swept them all up. I might have chatted up my seat neighbors; nope, one of them turned away after I spoke to him, and the other kept his responses to a couple words at a time. I might have been on my way to Benfica or Bayern or Barcelona, but nope, it was just Barnet, 109th in the English pyramid. Turns out I wasn’t even in Barnet, as the club was forced to move to the borough of Harrow a few years back, the life of a struggling football club being a particular kind of misery in many ways. 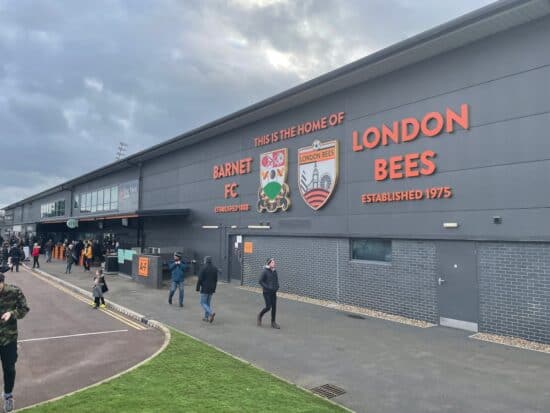 Wait, I can come back and see somebody else?

But there was knowledge gained, and a reminder that the soccer gods will always provide. I saw on the way out that the ground is also home to the London Bees, the club’s women’s team who are up in the third tier – and also to Tottenham’s women, recently promoted to the top tier. Seeing women’s football was one of the highlights of this trip.

So maybe it isn’t the Barnet Men I was even supposed to see. And maybe some day I’ll tell the story of when I saw mighty Stockport County – you never know – when they were down in non-league. Maybe I’ll go back to see Spurs Women play some real football, and maybe the club shop will have that Barnet FC pin badge for my collection. Maybe Covid-19 will lift. Maybe my company will thrive again. Maybe I’ll get to live in Europe for a while. Maybe Trump won’t be re-elected. 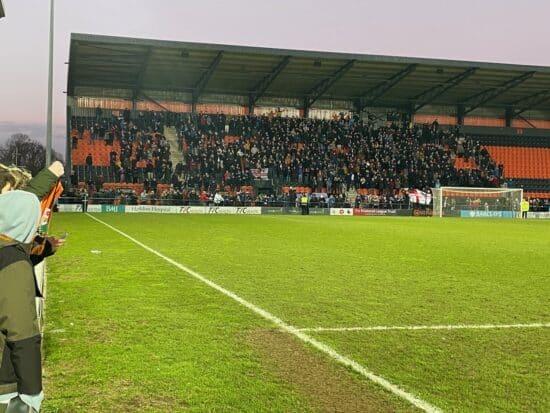 At least the Stockport County crowd had a good time.

I mean, we have to dream, right? What else is a groundhopper to do? What, for that matter, is a supporter at a club like Barnet supposed to do? I know exactly what Stockport County is dreaming of. They were on their way up, Barnet was on its way … somewhere, and I was on my way home.

It wasn’t what I had planned, but who cares? At least I’d seen a whole game at Barnet. Onward we go.