My Non-Game at Barnet FC

(Originally posted in November 2016, when Barnet were in League Two. For the 2021-22 season, they are in the National League. I still haven’t been back!)

Whenever I plan a trip to England to watch soccer, I try to pick a time when there will be plenty of games. I look for full league weekends plus either league games or cup games during the week.

A small corner of the massive World Travel Market.

On my latest trip, I also had a business reason to be there: I run Groundhopper Guides, a soccer touring and travel consulting company. So I was headed for the massive World Travel Market, essentially a wholesale travel show at the ExCel Center in East London. And it just happens that the same evening there was a League Trophy game about an hour away at Barnet FC. Doubleheader!

So, what is the League Trophy? It’s a competition for Leagues One and Two (levels three and four of the English Football Pyramid). Here’s more on that. But recently the Football Association decided to invite the Under-23 teams from a bunch of upper-league teams, which really pissed off a lot of the lower clubs and their fans. In fact, there have been boycotts of these games, with people proudly posting photos of empty away sections at some of the games.

I knew all of this beforehand, but I decided to go anyway. For one thing, I hadn’t been to Barnet; for another, they were playing Peterborough, another team in the lower leagues — as opposed to some higher team’s youth squad. I didn’t want to go all the way back to South London after an 8 p.m. game, and there was a cheap Airbnb right next to the stadium. Add it all up, and I was off to Barnet after a day of working the show.

I arrived at the Airbnb, where – and I knew this but didn’t really think it through – I was staying in a family’s second bedroom. This is fine, but their other kid was still there, just down the hall, and we weren’t introduced. So it felt a little weird. I asked about getting something to eat and was told about an Indian place down the way. I went there, got some take-away, but it all took longer than I thought and I didn’t even have time to eat before kickoff. While waiting for the food, I read up on the game and found out that (A) the League Trophy has a group stage before the knockout stages, and (B) both Barnet and Peterborough had already been knocked out of the group stage. Which is to say, I was about to see an utterly meaningless game — a non-event. I also read that both teams would be playing youth reserves. And it was raining. Fantastic. 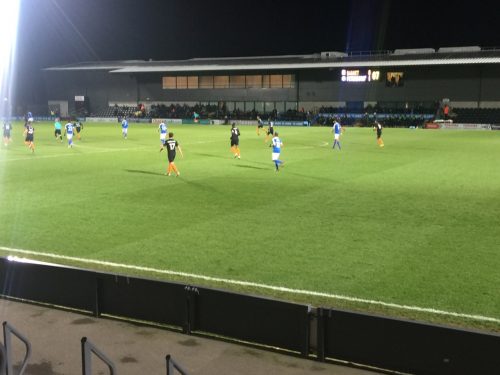 Kickoff of a non-event.

Still, what the hell else was I going to do? I walked through the park, up a floodlit walkway they call The Ramp, to the stadium. It is also a health club with community soccer pitches. There were two girls in the ticket booth, where I was relieved to see they at least were giving us a discount: 10 quid in the West Stand. She asked if I was a home supporter, and I laughed; are they worried about Peterboroughans (?) causing a ruckus in the home section? She wasn’t laughing, though; I told her I was a neutral from America, she looked confused, and we traded a ticket for a tenner. I went into the club shop to get my traditional club badge, only to be told, after some consideration, that they don’t have them. Not that they’re out; they don’t have them. Imagine a baseball team not selling Cracker Jacks.

The linesman and … the crowd. Actually, the lone figure in the stands is a steward!

It truly felt like walking into a high school football game: one guy at the ticket booth, three teenagers in the concession stand, and an official attendance of 393 – 111 of them from Peterborough! I can only assume this consisted of players’ parents, accessory staff that rode down on the bus, and London-area fans with nothing else to do. I took my seat – hell, a seat – just in time for the kickoff.

From the beginning, it was striking how clearly I could hear all the yelling from the pitch – and how much of it there is. The name of the ball carrier rings out from all over the pitch, teammates calling for a pass. The central defenders are always telling the fullbacks to “stay high” so runners trying to get in behind will be offside. All players with access to the linesman, when a call doesn’t go their way, take a moment as soon as the action stops to go and harangue him. And the keeper absolutely never shuts up, telling defenders to “close him down” or “stay up” or screaming instructions to the wall on a free kick, while also kicking his boots against the post to get their attention. When somebody screws up, his teammates’ looks and words are unmistakable. It is a cacophony of strategy, passion and testosterone. 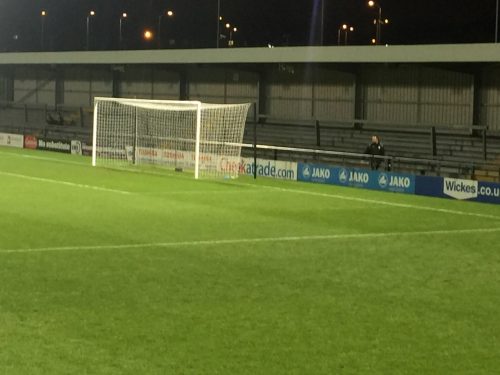 There were two people in the other end!

Oh, and Peterborough got a goal. I don’t recall how, but it seemed to be the fault of the Barnet keeper, upon whom scorn was heaped from all over the pitch, and I got the impression they had perhaps seen this before from him. And really, if you are annoying your teammates as a reserve keeper on a (then) League Two side in front of 393 people in a meaningless Tuesday night match … might be time to consider which other skills you have to offer the world.

I did rather enjoy the whole smallness of it. Total number of people in the two ends? Four, two of them employed. Ball kicked into the parking lot? Somebody go and get it. Somebody trying to start a song? That’s kind of funny, actually. Rain coming in under the roof? Let’s all back up a few rows.

I wanted all this to be charming, old-fashioned, sweet, homey … but there was no escaping that I was tired, hungry, cold, wet and bored. And I had Indian take-away back in the room. So when the halftime whistle blew, I did as well. I got a hot chocolate from the somehow overworked teenagers in the concession stand, assured the guy at the gate that I really was going home (as opposed to maybe wanting back in), then headed back around the stadium, saw the ticket girls sharing a sandwich, looked in on perhaps two dozen people in the club bar, and then walked back down the ramp, in the rain, to my room. I knocked back the curry, decided not to even count this as a game that I had been to, and went to bed.

It was the next morning, by the way, that I turned on my iPhone, took a deep breath, and found out America had elected Donald Trump as president. Fuck this whole evening. 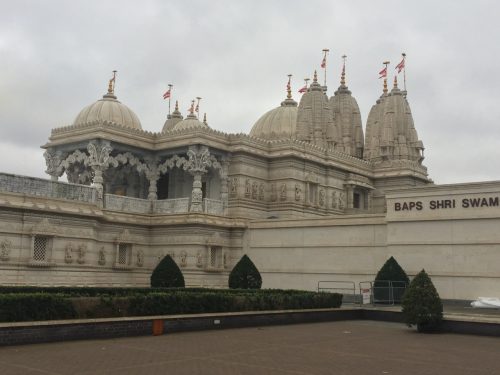 After uncurling myself from the fetal position, I went to check out the local tourist site (an amazing Hindu temple in the middle of a nothing neighborhood). While I was there, my phone chirped to tell me that I had a review from Airbnb – which, in turn, told me that I had violated a no-food-in-the-room policy and not been spoken well of. I also thought to check on the game and found out Peterborough scored in the 88th to win it, 2-1. Not that anyone cared, really. Maybe the parents. And while reading all that I went right past the temple, which took me a while to figure out, and I had to stand – again, in the rain – at a bus stop for 20 minutes to get back. And they closed for prayers right after I got there.

So, you know, sometimes this soccer touring thing is grand and glorious. Sometimes it’s big-time stadiums like Arsenal or charming locals like Boreham Wood. And sometimes there are complete wastes like my run to Barnet. Nothing against the club, but next time I’ll make sure they are playing a real game at a reasonable hour when I can get back home afterwards. And maybe next time they’ll have badges.