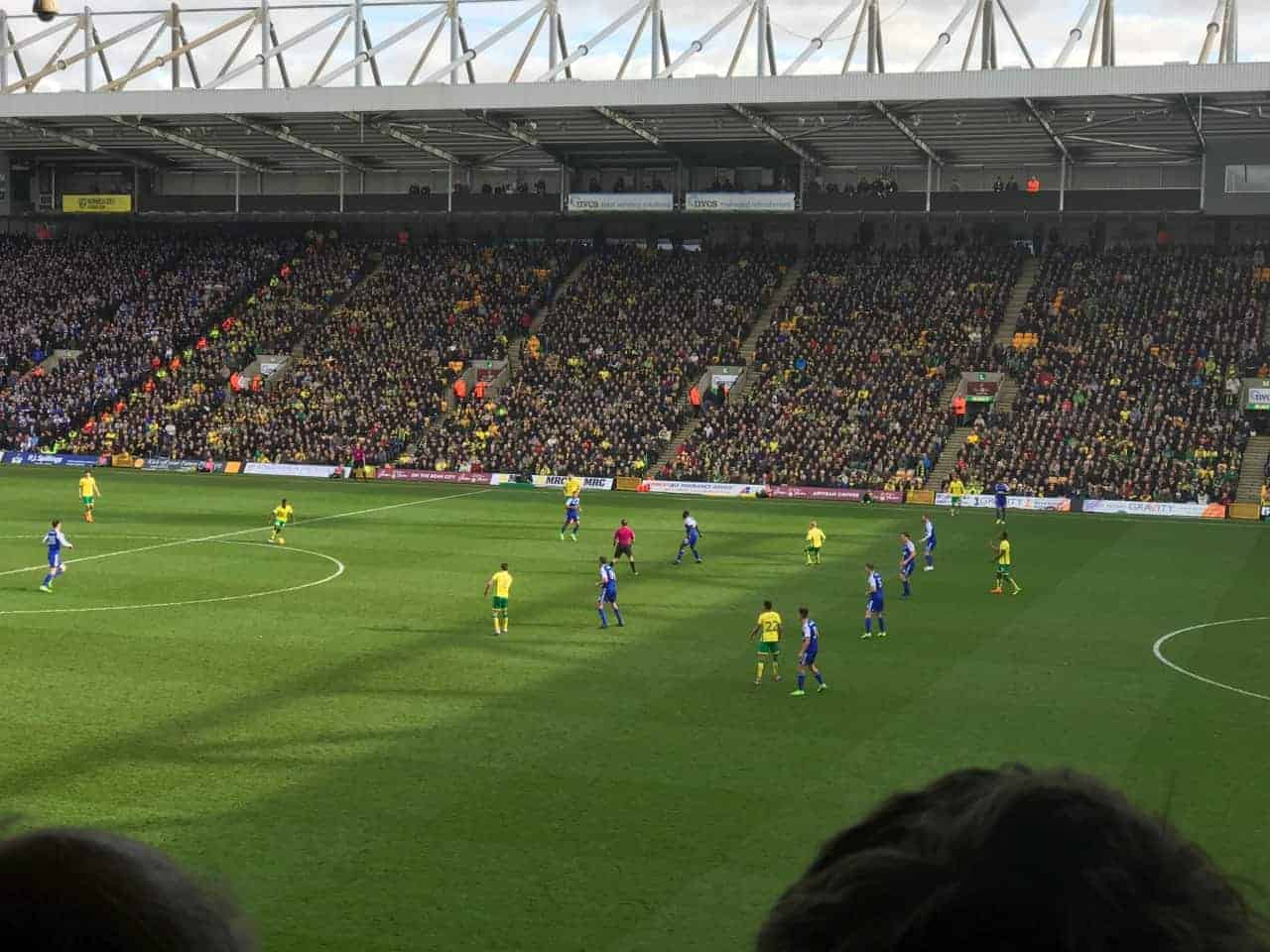 I love a derby day. It’s the peak experience of watching English soccer. And the East Anglian Derby featuring Norwich City vs Ipswich Town is a lesser know example (outside of England anyway) of a proper rivalry.

If you don’t know, a derby means a rivalry game, that game, once or twice a year if that, when That Other Team and their Loathsome Fans are in the same stadium with you, the hated colors facing off in person, legends about to be made simply because it’s the derby.

And you know what makes a real derby for me? A regional clash between two teams that are not in the big time, so nobody outside that area cares at all, but in that area it is so much more than a game. It is a cultural event, a reference point in time and space, a day that even non-sports people are aware of.

Welcome to the East Anglian Derby 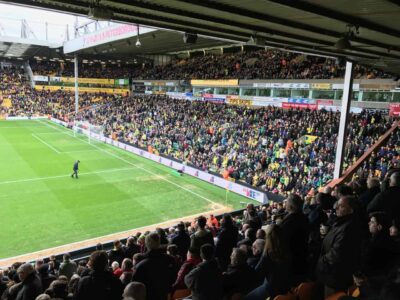 If you’re not British, you’ve almost certainly not heard of it. Norwich City versus Ipswich Town, two clubs just 43 miles from each other, and seemingly a long, long way from the rest of England. In fact, Ipswich is 90 minutes by train from London, but culturally Suffolk and Norfolk seem to London what Mississippi and Alabama are to Chicago.

Excuse an American reference if you’re not from there: It was the Ole Miss vs. Mississippi State football game I kept thinking of as Carrow Road filled up with anxious fans. Nobody outside Mississippi gives a damn, neither team is any good, and so it’s brother vs. brother, a fight down in the muck that is meaner and more hard-fought because of it. Think, also, of Kentucky-Louisville, Indiana-Purdue, Arizona-Arizona State. 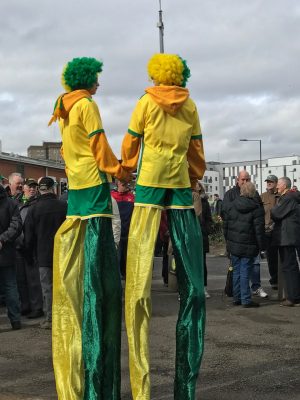 It was a carnival atmosphere outside the ground.

Another factor here is that they are each in a different county, so most of their fans don’t know any of the others. So it is county versus county with few friendships mixed in, making it more like Liberals and Conservatives in the US. It is, in a word, tribal.

And yet, dark as it can be, as I so well recall from so many of those games in my youth, the play is so much more energetic, the crowd is absolutely dialed in, the stadium is packed … somehow the colors even shine brighter. It’s the day you look forward to every year.

Another reason for the enmity: they are evenly matched. In March 2017 I saw the 142nd time they had played; Ipswich had won 60 and Norwich 57. (Update for the 2021-22 season: Norwich were promoted back into the Premier League after winning the 2020-21 EFL Championship title, but Ipswich Town are down in League One. Come on, Cup draw!)

A final similarity: the Mississippi game has an odd name, the Egg Bowl. The Norwich-Ipswich game, owing to its agricultural flavor, is known as either the Old Farm Derby (a nod to the Old Firm between Glasgow’s Rangers and Celtic) or as the Combine Classico. So even on these biggest of sports days, the English get their self-effacing jibes in.

To the Ground: Carrow Road 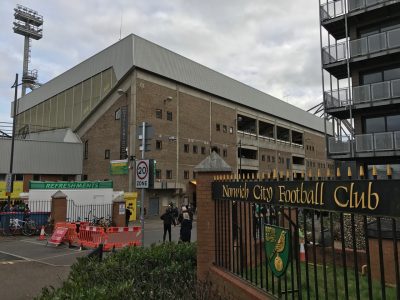 As I walked over to Carrow Road, the bitterness in the area was astounding. Most English people are so pleasant, especially outside London, and yet the first crowd I came across was in a beer garden, dressed in Norwich’s yellow, all pointing and chanting “Scum! Scum! Scum” at a passing group in Ipswich blue. Amazing people act that way in public.

I fell in with a couple of lads who showed me the way from the hotel, and they were absolutely delightful, even a little embarrassed about how they were undoubtedly about to act inside the stadium. They were impressed I even knew about this, much less came to see it.

A pleasant surprise at the stadium: I had to secure a membership to get a ticket, and I didn’t even notice the words “County Lounge” when I picked it up. Sure enough, I had access to a lounge! Hardly a VIP experience, but free hot drinks and cookies, and a man in a tie to show me to my excellent seat. See him there in the entryway? Outstanding. 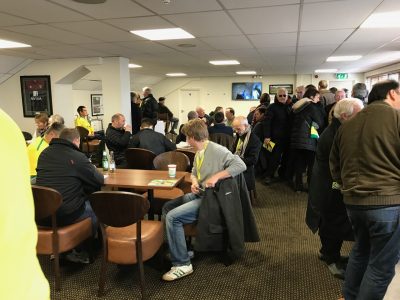 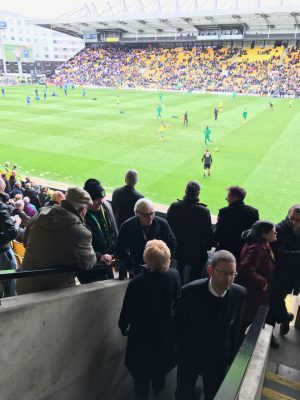 The teams came out, and it was just electric:

It kills me that I stopped filming when I did, because a few seconds later the announcer on the pitch counted down 3-2-1 and the crowd absolutely belted out “On the Ball City,” thought to be the oldest football song in the world, dating to the 1890s. The Ipswich folks in the corner tried to disrupt it, as would State fans ringing cowbells during an Ole Miss “Hotty Toddy,” but they were overwhelmed. 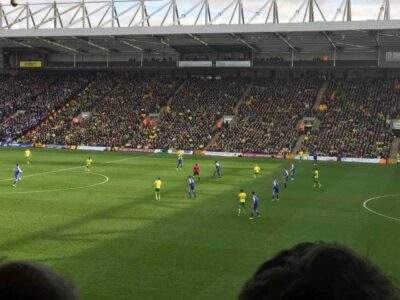 It was clear immediately that Norwich were the better side. Ipswich hadn’t won this derby since 2008, and Norwich were just in the Premier League last season. With a win today they would still have hopes for promotion back to it. With a loss, several fans assured me, their manager would be under pressure — not that English fans are all-or-nothing, of course.

In the 15th minute, the Norwich fans stood and started applauding — a fairly common thing done to honor a person who has passed away. But no one around me knew why we were clapping. Soon the word came around, though; we were “honoring” the 15 years Ipswich has spent in the Championship!

They had a good response, I thought, singing:

15 years in the Championship 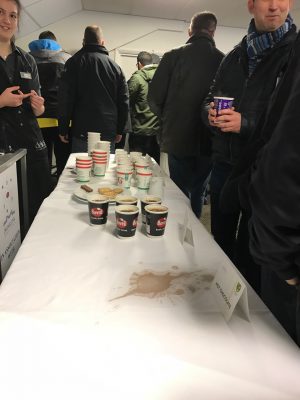 My kind of seats!

“Famous” is a stretch, but Ipswich has won the FA Cup and UEFA Cup (now Europa League) — granted, it was a lifetime ago, but Norwich has done neither. That song came up all day long.

It was 0-0 at halftime, thanks mainly to a bit of wayward Norwich finishing, excellent Ipswich goalkeeping, and without question the most bizarre non-penalty-call I have ever seen — by 14,000 miles. Two Norwich defenders literally wrestled an Ipswich player to the ground on a corner kick … nothing.

I went in for a hot chocolate and some cookies — and thought I could get used to this lounge business. All the analysis in there never mentioned the non-penalty.

Early in the second half, we thought Norwich had taken the lead, but there was a foul … I guess. I think it was a make-up call.

Note a fine tradition, captured here. Norwich think they have scored, celebrate, find out they haven’t, sit down, and then get showered with sarcastic cheers and wanker signs from the Ipswich folk. Love it.

Then, from nowhere and nothing, Ipswich scored, and the blue corner erupted. There was even a rush toward the touch line, which took a few minutes to clear, and which the Norwich fans took as a chance to comment on the classlessness of the Ipswich mob.

Minutes later, Norwich got a goal right in front of me, the Ipswich keeper making his one mistake of the day. It ended like that, 1-1, and everybody went home in the classic “At least we didn’t lose” mentality that is so common of derbies.

Here are the official highlights. Watch for the non-penalty — the ref actually called a foul on the striker! — and the Norwich goal getting past the keeper, near post, which shouldn’t happen.

And here is a typical post-match Norwich fan interview — just dripping with condescension. I agree that Norwich were better and wouldn’t have been flattered by a win, but listen to these folks talk about how Ipswich didn’t even “try to play football,” called their goal “sloppy,” and they must be thrilled just to get a point off them — calling it their “cup final” and whatnot. This is the kind of irrational thought sports fans excel in.

For me, if you’re below a rival in the table, you go to their ground, get outplayed, and come away with a point, you’d take that every day. So would Norwich going to Brighton this year, believe me. (In fact, they lost 5-0 down there.)

Here is a panorama I took afterwards: Note the Ipswich fans hanging around, singing “One Bobby Robson.” That would be their manager from back in the 1970s, the one who, you know, won stuff. 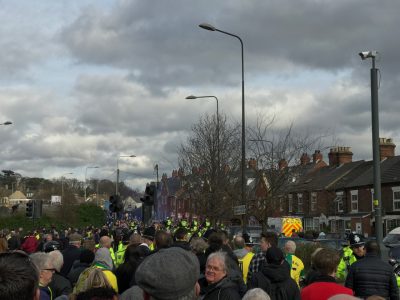 Cops on horses, getting the Ipswich folks to the station.

On the way back to my hotel, I was behind a father and son in blue, and I saw two green-clad fans wave to them, yell out “Hey Scum!” and then give them the two-finger salute. I thought for a second they knew each other, but then the Norwich folks said, “You still can’t beat us, so fuck off.” The father and son looked at each other, smiled, shrugged, and kept walking. What the hell is the matter with people?

There was even some decent post-game crowd fun, with a lot of Ipswich folks being shepherded off to the train station and kept separate from a Norwich crowd … which included me, by the way. A walk that took five minutes before the game took 45 after, but I made it back to the hotel just fine. It was just a lot of singing and jumping and wanker signs.

The whole hooligan thing is wildly overstated. I do love, though, how brave people get towards The Other when there’s a line of cops on horses between them.

When it was all over, I was deeply grateful for two things: that I had been there to see an East Anglian Derby, my first proper English soccer derby, and that I really didn’t care about the result one bit. Cultural event for them, but just a cracking game of football to me. 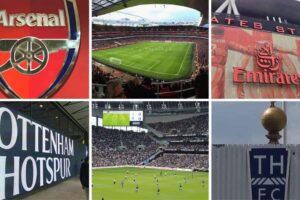 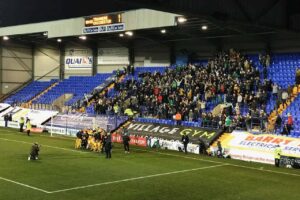 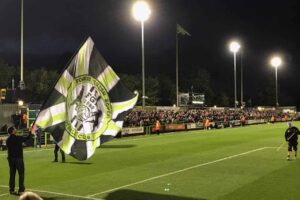