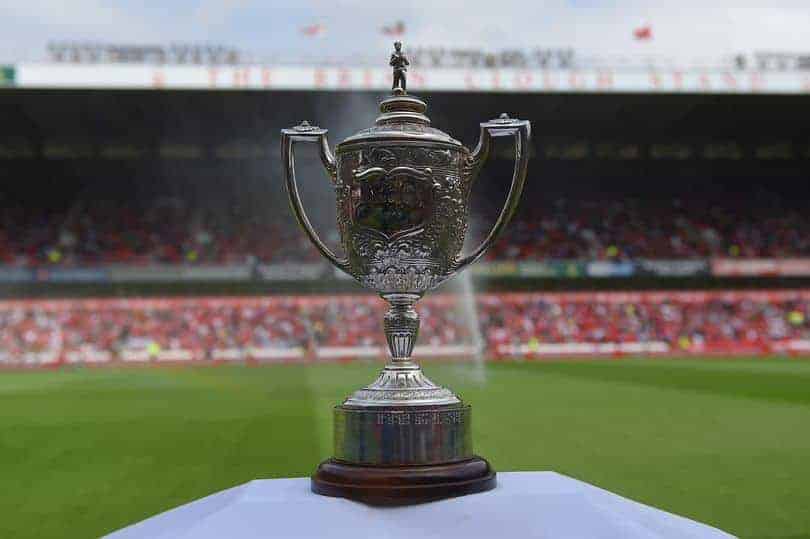 As with many English football derbies, proximity is the main reason for the dislike between Derby County and Nottingham Forest, who share the East Midlands Derby.

But these two clubs, whose stadiums are less than 20 miles apart, also share two unique features among soccer derbies in England: each club’s greatest-ever manager and a trophy named for him.

Let’s take a look at the East Midlands Derby, starting with a brief history of each club, adapted from our book, The Groundhopper Guide to Soccer in England. 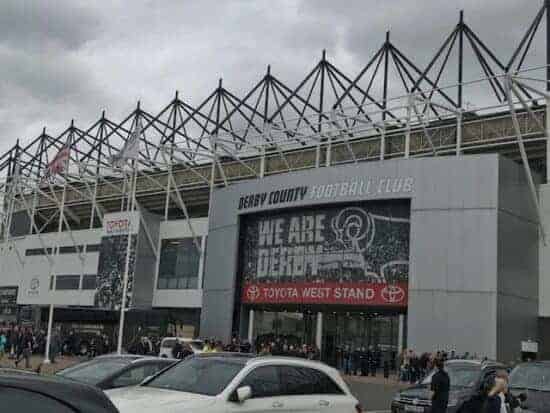 Derby County was formed in 1884, joined the Football League in 1888, and kicked around between the top two divisions — three times finishing second — before World War II. When football came back, they won the 1946 FA Cup, and then it was “normal service resumed.”

After a brief spell in the third tier in the mid-1950s, they were a midtable Second Division side until the late 1960s. That’s when they hired Brian Clough.

You might have heard of him; he is one of the all-time greats as a manager and personality. He was an outrageous scorer as a player — 251 goals in 274 games for Middlesbrough and Sunderland — but an injury caused him to retire at age twenty-nine.

He was hired a couple of years later, in 1967, by Derby, who had just finished seventeenth in the Second Division. He brought along an old teammate from Boro named Peter Taylor, and two years later they won the division. In 1972 they won the First Division. The next year they made the semifinals of the European Cup, losing to Juventus. 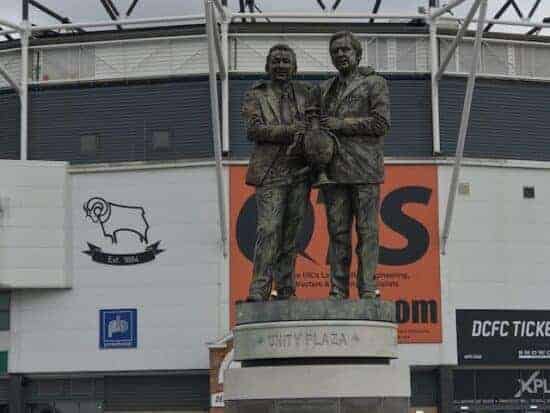 Statue of Clough and Taylor outside Pride Park.

By all accounts, Clough was a genius at tactics and motivation, as well as being one of the great characters in the game’s history. Words like acerbic and biting and entertaining are often applied to him. He was known for quotes such as “When I go, God will have to give up his favorite chair.” Taylor, meanwhile, came off as the voice of reason and calm, with the unfailing ability to spot and attract talented footballers who fit Clough’s system.

But if playing for Clough was one thing, apparently employing him was something else, and to the dismay of Rams fans, he and Taylor both left in 1973 amid constant battles with the club’s board. The team they had built claimed another league title in 1975, but by 1980 Derby County were relegated. They went to the Third Division from 1984 to 1986, and then did the yo-yo with seven league changes in twenty-two seasons. In the 2007-08 season they made history by posting the worst-ever Premier League points total, just 11 points (and one win) from 38 games.

They have made the playoffs in five of the last seven seasons as they’ve tried to get out of the Championship, but they lost twice in the semifinals and twice in the final — one of those in last-minute fashion. In 2018-19 they made it back to Wembley and lost the playoff final to Aston Villa. 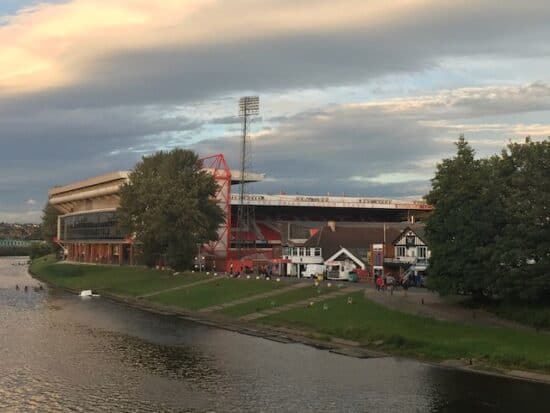 City Ground, home of Nottingham Forest by the River Trent.

If you knew nothing of English soccer and you happened to come into contact with Nottingham Forest Football Club today, you might think their history began in 1975 and ended sometime around 1990.

Here is why: in 1975, Forest had just finished sixteenth in the Second Division. In their ninety-seven-year history, they had never won anything except a couple of FA Cups (in 1898 and 1959) and some lower divisions, and they had finished higher than fifth in the league exactly three times. They were almost nobody.

But this is where their rivalry with Derby County reached another level; in 1975, they hired Brian Clough and Peter Taylor.

The legendary pair got Forest into Division One two years later, in 1977. The next spring they won the League Cup — and then the league! That got them into the European Cup (now Champions League), which they won in 1979 after bagging another League Cup and finishing second in the league. In 1980 all they did was win Europe again! 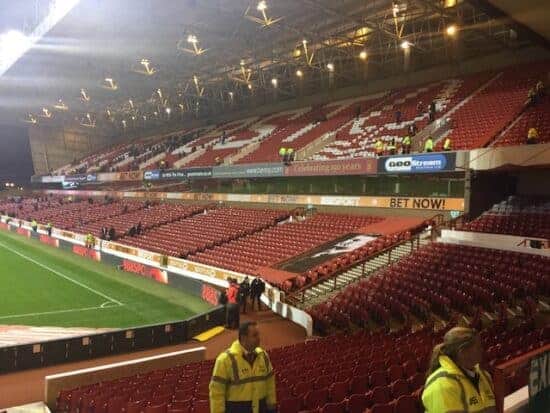 It’s really hard to put this into perspective. Think of Leicester City’s fairy-tale league title in 2016. That came after they had been promoted two years before and barely stayed up the year before. Right, so imagine they had gone on to win two straight Champions Leagues. Utterly and completely miraculous, and in fact Forest fans refer to these as “the miracle years.”

In the 1980s, Forest got into Europe a few more times, once as far as the semifinals, and won two more League Cups. But Clough’s power was fading, and his alcoholism was becoming an issue. In 1993 he retired on a day when mighty Forest were relegated from the Premier League. He died in 2004. Still, he looms over the club.

And in the twenty-eight seasons since Clough left in 1993? Forest have had 18 managers (in addition to an incredible 10 others who spent time as interim managers) and spent 21 years in the second tier (including the last 13), three in League One, and just four in the Premier League — and none since 1999. New owners arrived in 2017, and Forest just missed the playoffs in 2019-20—crushingly dropping from fifth to seventh on goal difference on the last day. Even though Forest had a 17th place finish last season in the Championship, supporters say there’s a new energy and belief about the club.

Of course, it was the Clough factor that took things to a different level in the late 1970s; supporters sometimes call the East Midlands Derby El Cloughico. 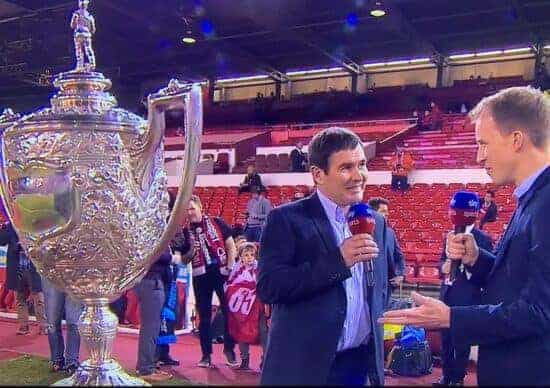 Nigel Clough and his dad’s trophy. (via BrianClough.com)

In 2007, the two clubs, along with Clough’s memorial charity, his widow Barbara, and his son Nigel — who played for him at Forest, later managed at Derby County, and now manages at Mansfield Town — decided to start their own little tournament. They found a 100-year-old trophy that had never been used, and ever since, it goes to the winning team until the other one wins to take it back. A draw counts as a defense, in other words.

The first time out was a friendly, and a fundraiser for the charity, in summer 2007. Since then, Derby have had the Clough Trophy for more days, 3,199 to Forest’s 1,750 (as of the February 2021 matchup which ended in a 1-1 tie), although the results table looks a little more even. Derby have five wins, six defences via victory and seven via draw, to Forest’s five, four and four.

Derby had it for the longest single stretch, March 2016 to February 2019, and Forest have had the trophy ever since.

There have been 30 players who suited up for both clubs since World War II, but in 2008 a manager made the switch, Billy Davies arriving at Forest after running Derby until the year before. Derby then hired Nigel Clough, and several popular players switched sides around the same time.

A game in November 2008 signaled a new intense era in the East Midlands Derby. A referee issued eight yellow cards, one red card, and disallowed two Derby goals in the final minutes before the Forest keeper — formerly of Derby, of course — saved a penalty to preserve a 1-1 draw. The referee was later suspended for a week by the league.

When they met in the Fourth Round of the FA Cup in February 2009, a 1-1 draw at Pride Park meant a replay at Forest, and things were bound to kick off.

Two things to keep in mind as you watch this video: Derby County hadn’t won at City Ground in 38 years, and they had a player named Kris Commons who had left Forest the summer before.

The next time they met, in the next league season in August 2009, Forest won a thriller, but one of their players decided, hey, you wave a scarf, I’ll wave the Forest corner flag in front of the Derby fans. As you might imagine, an unpopular decision. There were many fines from the FA for players and club. The extracurriculars start around 11:40 in this video:

Forest would win at Derby later that season to do the double, a feat they repeated the next season, including this memorable stomping at home:

And since we have yet to share a video of Pride Park bouncing, let’s throw this one in from March 2014. We’ll even share the Derby radio commentary for good measure!