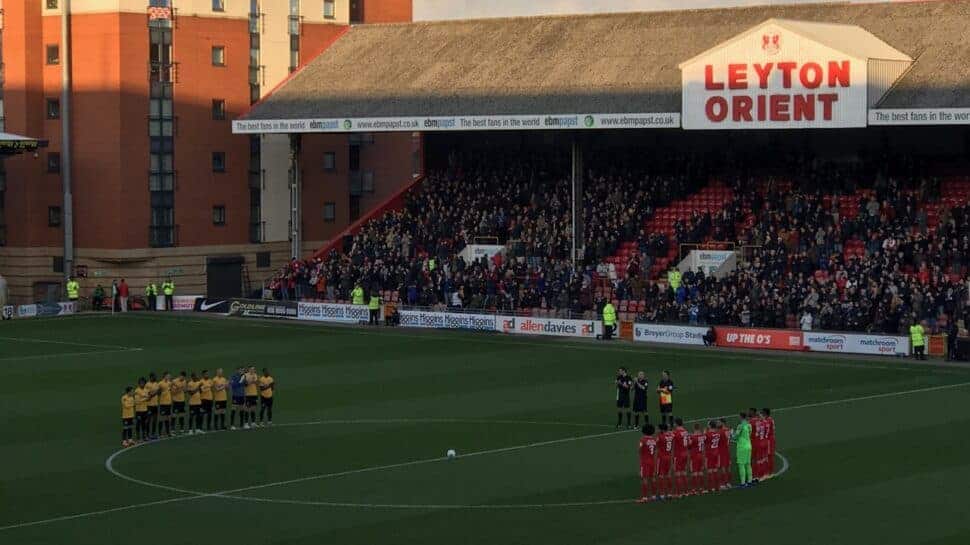 Teams on the field before a game at Leyton Orient.

It is truly my goal at Groundhopper Guides to get people away from the “big six” Premier League clubs and out into the realms of, I guess we’ll say, “real” English football.

I also like to get groundhoppers away from London, Manchester and Liverpool, but in this case you don’t even have to leave the capital to experience some old-fashioned community football.

One of the best ways to do this is simply to attend a game at Leyton Orient FC. 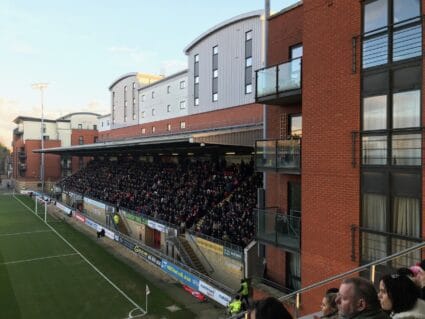 What and Where is Leyton?

Leyton is a district in the eastern part of Greater London, part of it being the Queen Elizabeth Park where the 2012 Olympics were held. Its name comes from the River Lea — “ton” being an old word for town or settlement, hence Lea-ton. It’s about 30 minutes out from London Bridge by rail.

It was a mostly industrial area that has, since the usual 20th-century decline of those sectors, become mostly residential as well as young and diverse. It is only one-third “white British,” with the rest of the inhabitants coming from Russia, North Africa, Ghana, Nigeria, Jamaica, Ireland, Portugal, Cyprus, Italy, South Africa, Bosnia, Serbia, and Poland. More than half the population is under the age of 30.

It doesn’t take much reading between the lines here to detect a pattern: Leyton is gentrifying like crazy.

What’s With the Name?

It should go without saying that there is no real connection between this East End neighborhood and anything Oriental. Apparently this came from the fact that, in the club’s 19th century early days, a player had a job at the Orient Shipping Company. I’m not sure how that led to the club’s name, but that is what the club historian says — and he wrote 12 books on the subject.

They are also sometimes called the O’s. 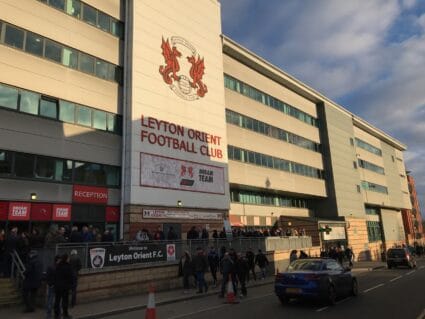 The main stand from outside.

As with so many football clubs in England, this one started within a cricket club. That was in 1881, and many of the founders were students at what is now called Homerton College; the club and college still play a friendly every season.

They had some different names and locations, finally settling in Leyton and as Orient in the 1930s. Through all this time they never got to even the second tier of the league pyramid.

Their peak came in the 1960s and 70s, when they actually made the First Division (now called the Premier League) for the 1962-63 season. They finished last, of course, with only six wins and 21 points from 42 games — but they got there. In fact, they were in the second tier (now the Championship) from 1956 to 1982, but haven’t been back since.

In 1978 they made the FA Cup semifinals, the only time they ever got that far, winning at Norwich and at Chelsea along the way; they went out to Arsenal, 3-0, at Stamford Bridge.

I couldn’t find any highlights from that one, but here is their win at Chelsea. Talk about some old school footy — and check out the old Stamford Bridge!

One nice bit of history for the club is Laurie Cunningham, who started his career at Orient in 1974 and later became the first black footballer to play for England at the senior level. He later played in Spain but was killed in a car crash in Madrid at age 33. As you walk over to the ground you’ll pass his statue and plaque: 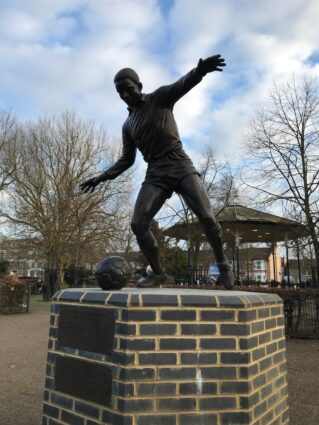 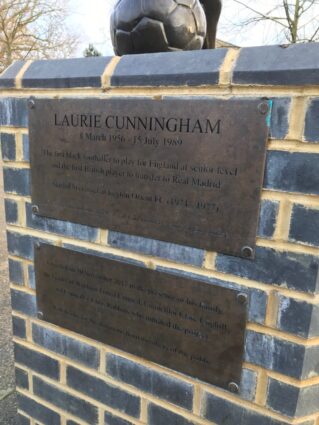 Another historical feature they share with many clubs: financial trouble. Orient were famously sold for £5 in 1995, by promoter Barry Hearn. This is after they went from October 1993 to September 1995 without winning an away game.

More trouble came in 2014, when Hearn sold the club to an Italian who got them relegated twice in three years and had 11 managers. A British former O’s fan bought the club in 2017, and when I asked some old-timers about that before the game I saw, they both looked as relieved as if I had said, “Remember when your doctor said you were cancer-free?”

Orient were relegated out of League Two — and therefore out of the Football League — in 2017, ending what was London’s second-longest run after Fulham. They were toiling in the fifth-tier National League when I showed up to see them as part of my “Groundhop 1” soccer tour on New Years Day 2019.

They got promoted back to the Football League in 2019, but then tragically their 49-year-old manager passed away from a cardiac arrest. They stayed up that year and are in League Two again for the 2021-22 season. 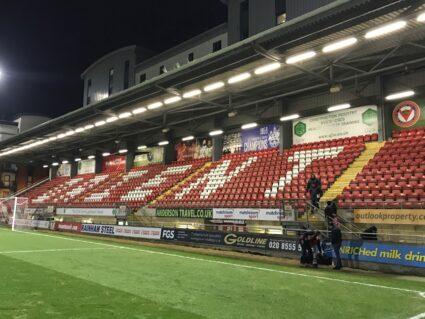 Like so many English grounds, this one was essentially rebuilt starting in the 1990s, after The Taylor Report required many safety upgrades in the wake of the Hillsborough Disaster.

All of that was accomplished by roughly 2006, with some of the money raised by selling the corners of the property for residential flats. This leads to what I believe is a rather unique situation in English football, at least among the 60+ grounds I have visited: some of the best seats in the house are people sitting on their private balconies!

Three of the stands are simply named for their location, but the old South Stand is now the Tommy Johnston Stand, named for the club’s all-time leading scorer.

Away fans will be in the West Stand, with (from what I could tell) the rowdiest home folks in the Johnston Stand.

The whole place is now known as the Breyer Group Stadium, though it will disappoint my American readers to learn that’s not the Breyers Ice Cream Company. Rather, it’s a local roofing outfit.

Here are the teams coming out at Brisbane Road:

Down in the lower leagues, the officials actually do something smart and with care taken for the supporters (they generally don’t make a habit of either of these things.): They play all the local derbies over the holidays, so supporters don’t have to travel so much. (It can be a hassle during this time of year).

Orient’s biggest rivals being Dagenham and Redbridge, from 30 miles to the east, they had played at Dag and Red on Boxing Day. I showed up with seven Groundhoppers for the return leg on New Year’s Day. 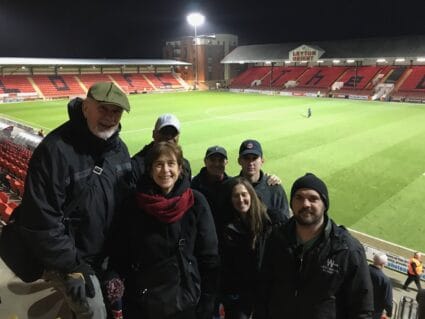 The Groundhop 1 crew at Brisbane Road.

Arriving in Leyton is quite easy; just hop the Central Line to Leyton. From there you can head left for the Leyton Star pub or walk right, towards the ground, and check in at Leyton Technical Pub. We ate in the former, where the menu was small but the burgers were good. Since we had a big group, we made a reservation.

There is also, near the ground, a Five Lads Peri Peri Chicken place, which I mention only because I find it hard to believe Five Guys lets them get away with that. 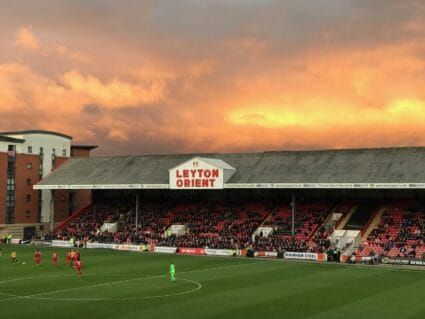 I chatted with a couple of old-timers who were around for the top-flight season. In fact, one of the reasons I tell you all this is so that when you’re standing in a line at a place like Leyton Orient, you can turn to your neighbors, ask them how long they’ve been coming around, and then know to say something like, “Oh, so you saw them play in the top tier?” And then they will look surprised, chuckle, say, “Yes, briefly,” and look at you as if you are pleasant and not an idiot. So it begins.

We were in the West Stand and I was settled in with my Twix and coffee. I was going to say the game wasn’t too entertaining — in fact, when I sat down to write this, I had forgotten Orient got a goal and won it, 1-0. But I somehow didn’t remember the details.

Here are the highlights, featuring a fantastic accent from the second commentator, a couple of hits of the woodwork, and, just over four minutes in, a bad miss for what would have been one of the best goals I’ve ever seen in person — and it was right in front of us.

All in all, seeing a game at Leyton Orient is a great way to experience old-fashioned soccer in London and get out to a part of town where tourists usually never go, meet some appreciative locals, and enjoy a day out without having to travel far at all. 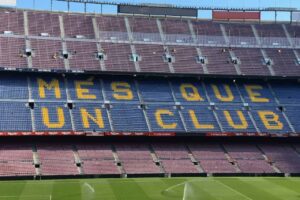 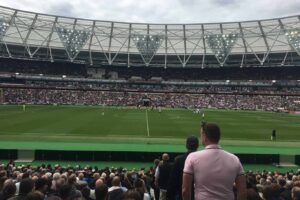