Molineux from outside the Billy Wright Stand

Aside from a long name and their unique “old gold” uniforms, Wolverhampton are kind of a mystery to most Americans. But they have been making real waves in the Premier League recently. So let’s get to know this historic club from the Black Country a little better. 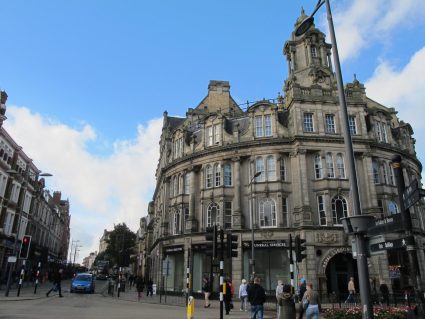 Wolverhampton, essentially a Birmingham suburb with about 250,000 residents. It is technically a Metropolitan Borough, but I make no effort to understand these British distinctions — towns, cities, market towns, royal towns, districts, boroughs … whatever. The Birmingham area goes on and on, and Wolverhampton is in the outer parts of it. For this American, that makes it a suburb.

Its roots go back to medieval days, when it was a center of the wool trade. In the Industrial Revolution, it became a center of many industries, most notably lock making and jewelry. It was also a hub of bicycle manufacturing until the 1970s. It feels smaller than 250,000, especially if you’re visiting for a game. That’s because it’s about a 15-minute walk from the train station to the stadium, and you pass through downtown with several pubs along the way. 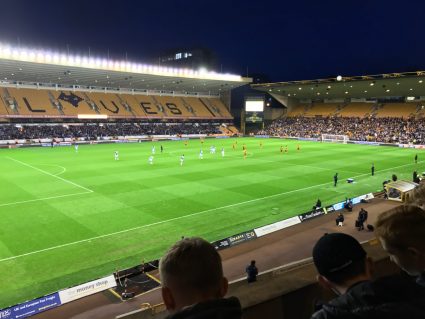 Not much doubt whose house this is.

Wolves. Even though their name includes Wanderers. But there are lots of Wanderers and Rovers kicking around English football, so Wolves it is. Also, it really is pronounced Wolverhampton, just as it looks. In a country where Gloucester is pronounced “GLOS-ter,” you never know. Could have been “wolfton” for all I knew. 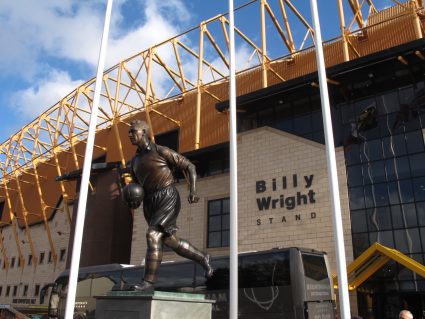 The Molineux is a 31,700-seater that somehow seems bigger. It is also, like the team’s kits, of a striking color. I once referred to this as orange, and I was politely but firmly corrected; it is “old gold.” Its most prominent stand is actually behind a goal; the Stan Cullis Stand, named for a former player and manager, towers over the rest of the place and is visible from all over town. Behind the other goal is the small Jack Harris Stand, where the rowdies sit. There is also a temporary structure next to it, often unused, and known informally as the Gene Kelly Stand; since it’s uncovered, folks there wind up “singing in the rain.” 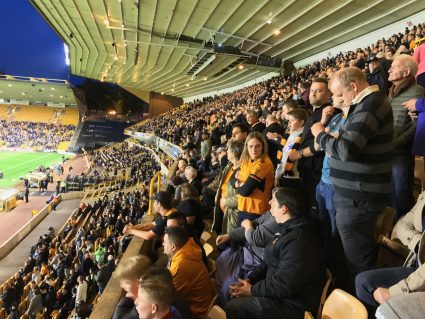 In the Billy Wright Stand

On each side are two-tiered, curved stands called the Billy Wright and the Steve Bull. Each of these are named for club legends, and both the Cullis and Wright stands have a statue of their man outside.

A distinct feature of the place is how they seat the away fans. Normally the away fans are in a corner or behind a goal. At Wolverhampton, they occupy the lower tier of a side stand, all along the touchline. So if their section is full, they stretch from goal line to goal line, with home fans above them. Makes for some interesting banter.

If it’s a smaller section of away fans, they get stuck in the upper corner of the Stan Cullis behind a goal.

The name Molineux comes from the landowner in the 18th century. He built a hotel that still stands as the City Archives building, and the whole area eventually came to be a big park called Molineux Grounds. Wolves started playing there in 1889. 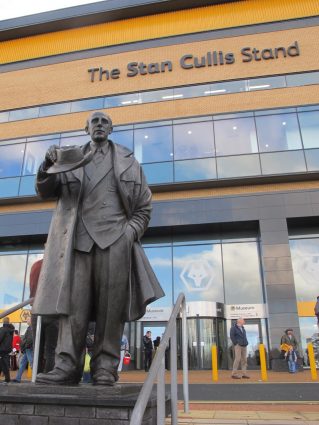 Legendary manager Stan Cullis, from the good old days of the 1950s.

Wolves go all the way back to 1877, making them one of the oldest clubs around. There were one of 12 founder members of the Football League in 1888, and in fact played in the first-ever Football League game against Aston Villa. They won the FA Cup in 1893, but they soon faded from prominence until the years before and after World War II.

It was in the 1950s that they hit their glory days. With Billy Wright as the captain and Stan Cullis as the manager, they won the league in 1954, 1958 and 1959. They also staged famous “floodlit friendlies” with big teams from all over the world.

The most famous of these was a 1954 game played at night, live on the BBC, against Honved from Budapest. The Hungarian national team had just humiliated England twice — games that altered the course of English football for a generation — and many of those players were on the Honved side. The Hungarians were up, 2-0, after 14 minutes, but at halftime Cullis told the staff to water the pitch to slow the opponents down. Wolves scored three in the second half and won it, causing the (British) press to declare them “Champions of the World.” 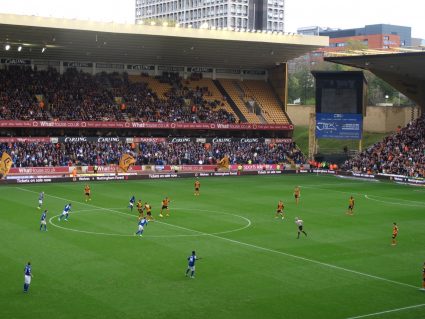 Kickoff vs Birmingham City; Blues fans in the lower section of the Steve Bull Stand.

That game was apparently the final straw to create the formation of a European Cup tournament, today known as the UEFA Champions League. There are large photos from the game on the side of the Molineux.

Wolves went on to win their fourth FA Cup, but got relegated in 1964. Odd historical note: Wolves actually played in, and won, a 1967 league called the United Soccer Association, made up of US and Canadian “teams” that were actually foreign teams. The LA Wolves beat the Washington Whips (aka Aberdeen of Scotland) to win it, and then the league became part of the NASL. 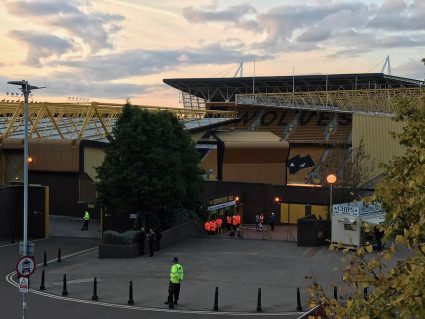 Approaching the Molineux from the center of town.

Wolves made the European final in 1971, losing to Spurs, and the League Cup in 1974. Then they started bouncing up and down, and when they spent a fortune on the stadium in 1979, it almost wiped them out. By 1988 they were all the way down in the Fourth Division, playing teams like Scunthorpe and Newport County.

They got it together and spent most of the 1990s in the top division, then bounced up and down until 2012, when they were relegated from the Premier League. The next year they went down again to League One.

In the last couple of years, a Chinese “consortium” bought the club and started pouring money into it. Wolves barnstormed the Championship in the 2017-18 season, punched their ticket to the Premier League, and have gone and finished 7th the last two seasons, spending some of last year in the Europa League. They are, as the Brits would say, “flying.”

And about those colors: the gold and black are said to refer to the city’s motto, “Out of darkness comes light.”

The main one I know of is to Jeff Beck’s “Hi Ho Silver Lining.” You might think you don’t know the song, but here they are, doing their thing to it:

I have also seen Sheffield Wednesday do this, and of course each club says they did it first and the other was just mocking them at first. Wikipedia says Wolves did it “originally and most famously.”

They also have a lot of songs about West Bromwich Albion; see below. 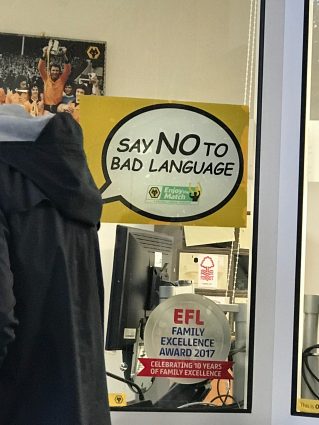 … except when the Baggies are in town!

West Bromwich Albion, just 12 miles away in another … suburb or whatever … of Birmingham are by far the biggest. This is known as the Black Country Derby, after the region’s famous pollution during the Industrial Revolution. (Read more about derbies here.) Technically, nearby Walsall are also part of this, but they are smaller and always in different leagues; Wolves have only played Walsall a total of 16 times, compared to 160 games against Albion since 1886. In 2008, a national survey of football fans said Wolves-WBA was the fiercest rivalry in the country!

I also heard, during my tour of Wembley Stadium, that a Black Country Derby FA Cup final is the worst nightmare of the guy who has to engrave the winner’s name on the trophy. He has like seven minutes to accomplish this, and these are the two longest names in the country. It would be a heck of a final, though!

The other area teams, Birmingham City and Aston Villa, are also considered rivals. And for the 2020-21 season, all but Birmingham are together in the Premier League! 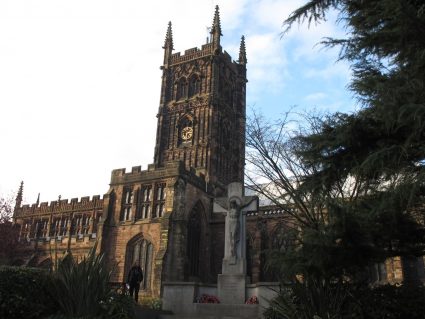 All of these are either right in town or quite nearby. 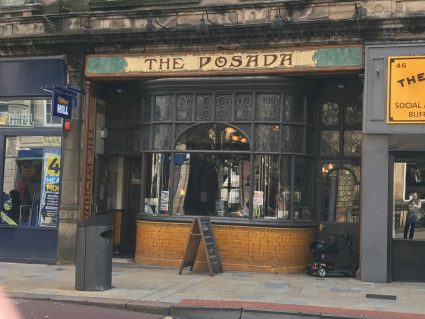 I was astonished by the number of pubs I saw in Wolverhampton — and these are just between the station and the stadium!

Now that they are in the Premier League, a Wolves ticket is a big ask. What they did in the 2019-20 season was have all foreign fans pay a membership fee, then hold a lottery for each home game for a limited number of foreign-fans tickets.

Here they are coming out for the game against Birmingham back in 2014:

And here they are enjoying the hell out of a game-clinching goal against Spurs at Wembley in 2018:

I see Wolves as a fun day out from Birmingham, especially if you have interest in old homes or the Industrial Revolution. Or pubs. Or being one of the few Americans at a ground. And if you can get a ticket, put the Black Country Derby at the top of your go-for-it list!