Hull City vs Reading:
I Guess We Have To Do This

By the time I rolled into Hull, everything was pretty much falling apart. 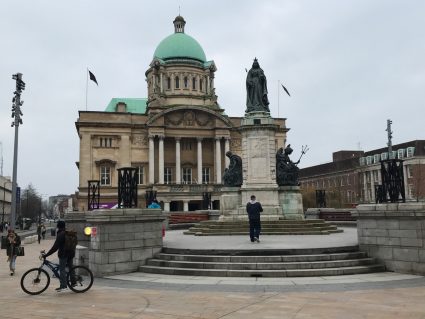 I see this Victoria lady everywhere!

The night before in Sheffield, the local derby had been a passionate, loud … nil-nil. Then an alarm in a building near my hotel went off all night, so I got no sleep. The night before that I only had five hours sleep because some dumbass keeps booking me onto early trains after night games. The night before that was a nil-nil in, um, London. (It actually took me a second to remember which city).

Somewhere, I lost my razor, as one does, and had an itchy face because I didn’t feel like buying what would be shaving kit #13 (I am accomplished at losing razors). The handle on my rolling luggage broke off, so the telescoping grabbie bit barely worked. (In my sleep-deprived delirium I told a complete stranger “I can’t get enough of a grip to get it up.”)

I got traveler’s stomach, the details of which I will spare you, but which occurs when one gets exhausted and one’s diet becomes atrocious. I was low on money. All my clothes were dirty. I was tired of trains. My five-year-old laptop was slowly dying and barely working with my camera or phone. Every hotel’s WiFi was shitty. 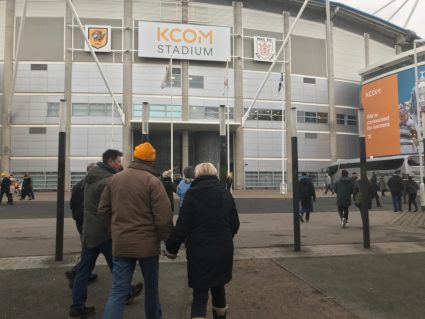 Together, we can do this.

I was a marathoner stumbling to the finish line. I was a race car losing its tires down the home stretch. I was a vagabond dragging his stick and bag behind him on the ground. In the rain.

All of which is perfect, really, because the two teams I would be seeing play on that day were in exactly the same shape. Hull City were winless in five games, Reading in seven. Reading hadn’t scored in three games, Hull in five of their last six. They were 18th and 20th in the 24-team Championship. Plenty of seats available, folks!

When I was in my seat — right on the midfield stripe — just before kickoff, a man popped into the row, looked at me, clapped and rubbed his hands, and said, “Ya-arrite, mate? Ya ready?” I actually thought to myself — but didn’t say — “The hell are you lookin’ at me for? Nobody’s gonna fucking score.”

But we’ll get to that. First, say hello to Hull.

A Visit to Hull, England 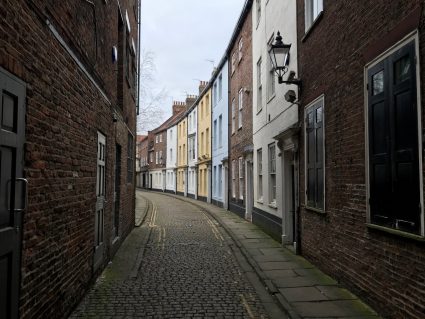 Or honestly, I don’t know the name of the place. Everything about it confuses me. The football club is Hull City. The map says Kingston-upon-Hull, which implies a river called Hull, which I don’t recall seeing. So is the town Kingston, or Hull? The train station is called Hull online and on the tickets, but Paragon Exchange in person. Where the hell am I?

I had booked a room at an inn, and arrived to find a pub, which was closed. Right. I went for a coffee, tried again, a lady was there, and she was actually able to check me into a room upstairs. Which was nice. A miracle. During the process, she asked if I was in cow, which confused me again. I said, “Excuse me,” and this time she took another run at it and said, “Er ya in CAH?” Oh, right — car. No, no car. Nor cow.

I asked her where I should eat breakfast, and she said “definitely Theevinarries.” I didn’t even ask. I went up and Google Theevinarries and turns out it was Thievin’ Harry’s. I decided to do fish and chips instead, and she recommended bub-CAHvas. She also said I “moost hov the pat-eh.” The what? “The PAT-teh, loov! They invented it there.”

So, off I went to look for Bob Carver’s, famous home of the pattie. 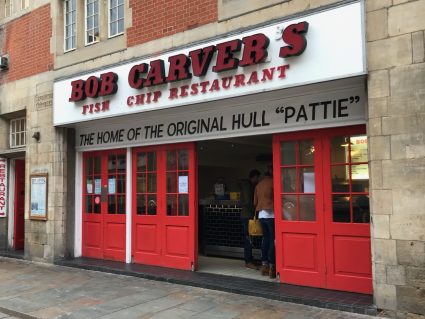 By many accounts, the Hull chippie.

Hull is a lovely place, when you can lift your head from the cold ocean wind long enough to see it. Too bad I wasn’t really in the mood for anything. Perhaps I’ll come back in summer. On this January day, I was just going through the motions, really. Old Town, check. Marina, check. Picture of the fountain with the big building, check. Shopping center, got it. Pedestrianized downtown, yep. Basically it’s the Standard Northern Town Story, Coastal Variation.

And the famous pattie with chips and mushy peas at Bob Carver’s? Well … grey. I guess they mash up fish and fry it, which counts as an invention in the same way that Yorkshire also claims that a chip buttie — literally a French fry sandwich on white bread with butter — is something new and different. Both are known contributors to travel stomach, by the way. 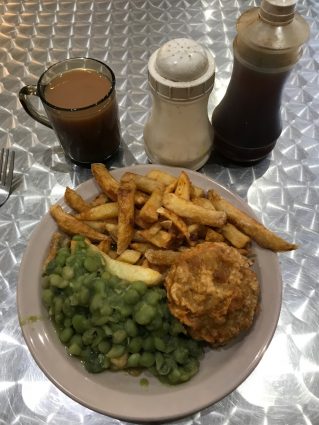 Again with the Hull communications. I asked somebody for a taxi number — Uber and Lyft haven’t made it out here yet — and he said to me, “Ya mean the 35?” I’m thinking, yeah, that’s a number ya wanker, but before I could blurt that out he said, “It’s 35-35-35 mate. Ya know the area code?” Folks in Hull are mighty friendly, but actually speaking with them takes some practice.

After failing yet again to get a taxi driver to talk football with — it’s all about cricket in English cabs — I got out at the stadium, hunched into the wind, and joined the mostly silent folks ambling towards the big, clean, modern KCOM Stadium. 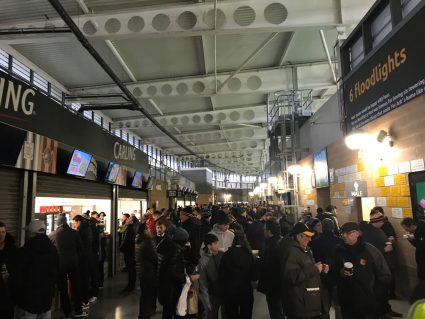 Lovely stadium — not so much the club’s situation.

In there, it was immediately apparent what I was in for: not much. The server was down, they couldn’t print my ticket, so they just gave me another one. There were about seven people shopping in the club — which a steward 50 yards away could not point me towards. There was muted conversation in the concourse. Barely two-thirds of the seats were filled. Maybe 200 people made the 221-mile, four-hour trip from Reading. The very definition of dedication. Or something.

I knew a bit of the context already: Hull had been relegated from the Premier League last season, which is depressing enough, but the bigger issue is that their owner and chairman, Assem Allam, seems to be a total dick. He announced one day that he was going to change the name of the club to Hull City Tigers because … marketing. The League said no, the FA said no, and the fans said “We’re Hull City til we die,” to which the owner said “They can drop dead whenever they want,” and he has since said he won’t invest a penny in the club until he’s allowed to change the name. 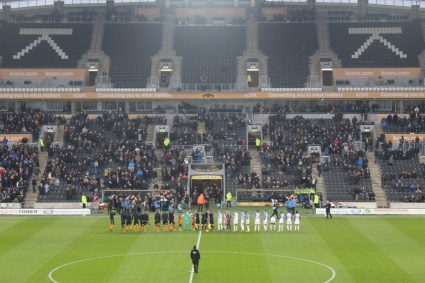 The teams are out.

The game itself quickly settled into a midfield kick-about, with such a glaring lack of quality in the attack that the crowd could hardly muster a COME ON as the Hull players wandered in the direction of the goal. The Reading players never even gave their fans such an opportunity, and I literally never heard a peep from them all day.

The only time the Hull fans sang, really, was “We Want Allam Out.” An owner like this is the equivalent of having travel stomach when you can’t shit the problem out. Similar afflictions have recently struck Newcastle, Charlton, Leeds, and others. 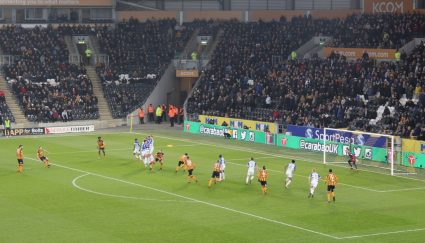 Free kick at the KC

If your club has this problem, you go out to the game, because it’s your club, and you sing and hope he’ll go away. Meanwhile, as a visitor, I realized it was the kind of (non) game where I might as well see how many of the football-game characters I could find.

One was easy, because we had a Coach right in our row. Without much else to entertain me, I took to writing down all of his instructions:

Shockingly, none of it worked. 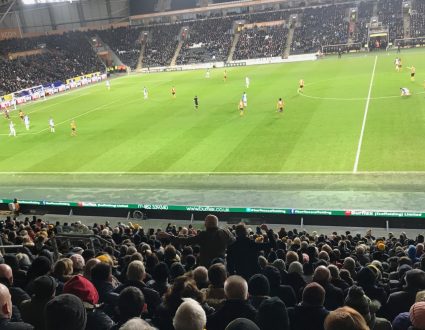 Meanwhile, we had a couple of attempted Song Starters, as well. The saddest was when one guy, somewhere down there, started “You Are My Sunshine.” He treated it the way a lion treats a weak gazelle. Not only did no one join in, I think most people cringed. He gave up, but not quickly enough.

There were a couple other classic characters who might need their own sub-genre. This is the pair of dudes who, whenever anything slightly positive happened, would rise as one and start yelling “COME on Citeh! COME on Citeh!” The one on the right would pump his fist in the air, while the one on the left would try to work the crowd into a frenzy — I guess. He would punctuate each COME ON with an arm swing and a pleading glare all around. He performed quite literally the exact same set of motions every time. I suppose he really thought that he might somehow start a riot of enthusiasm, which was funny to me. I wondered what the people right behind him thought, though. Looking for a different season ticket next year, perhaps? 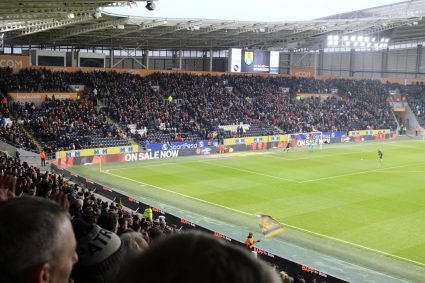 Otherwise, it was mostly Brooders, Pensioners, and Middle-Aged Randos all around me. If there were any TwentySomethings With Product in Their Hair, or Single Females, they must have been behind the goal working things out.

I’ll say this for the Hull fans: they seriously welcome back their former players. When the PA guy was announcing the Reading lineup, a couple of times he included the phrase “Please welcome back.” One of their substitutions was greeted with such applause that I thought it was a Hull change. Another Reading player got an ovation and a song! I’ve never seen anything like it.

They also did a minutes’ applause for all the people around the club who had “passed over” during 2017. Nice gesture, that.

To that list one might add “The 2017-18 Hull City Season.” And hell, Reading, as well. And although Reading truly were “More shit than we are,” they held on for their point, and we all stood and clapped politely, as if a game of football had just occurred. For me, it marked 270 consecutive minutes of watching football without seeing ball strike net.

Back on the Road 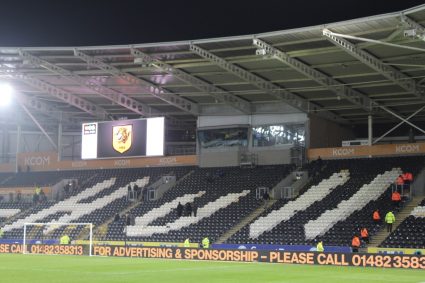 Last view of a stadium for me — for now.

Otherwise, I mean, can I go now? I got my pin badge in the store (check) and walked back in the wind. I broke several rules at once by eating at a Prezzo in a mall — it’s pretty much an Olive Garden that tries to appear classy — and spent the time pondering one of the great questions of life: why does a dude who has a date with a lovely woman, and who knows she will dress up nicely because she’s a woman going out on a dinner date, nonetheless wear jeans and a tee-shirt? I wanted to slap a couple of them, right there in the restaurant.

But that would have required energy, even enthusiasm, and I was fresh out of both. During that dinner I officially reached the End of the Trip, and became a Travel Zombie. From that point on, you just keep shuffling along, waiting for it to end, trying not to break or lose anything else.

And when the cold winds of January are blowing, you at least have the company, in that state, of a majority of English football clubs — very much including Hull City and Reading. Just stay up, don’t cause any more damage, and let’s try this again another time.

A Photo Gallery from My Day in Hull: