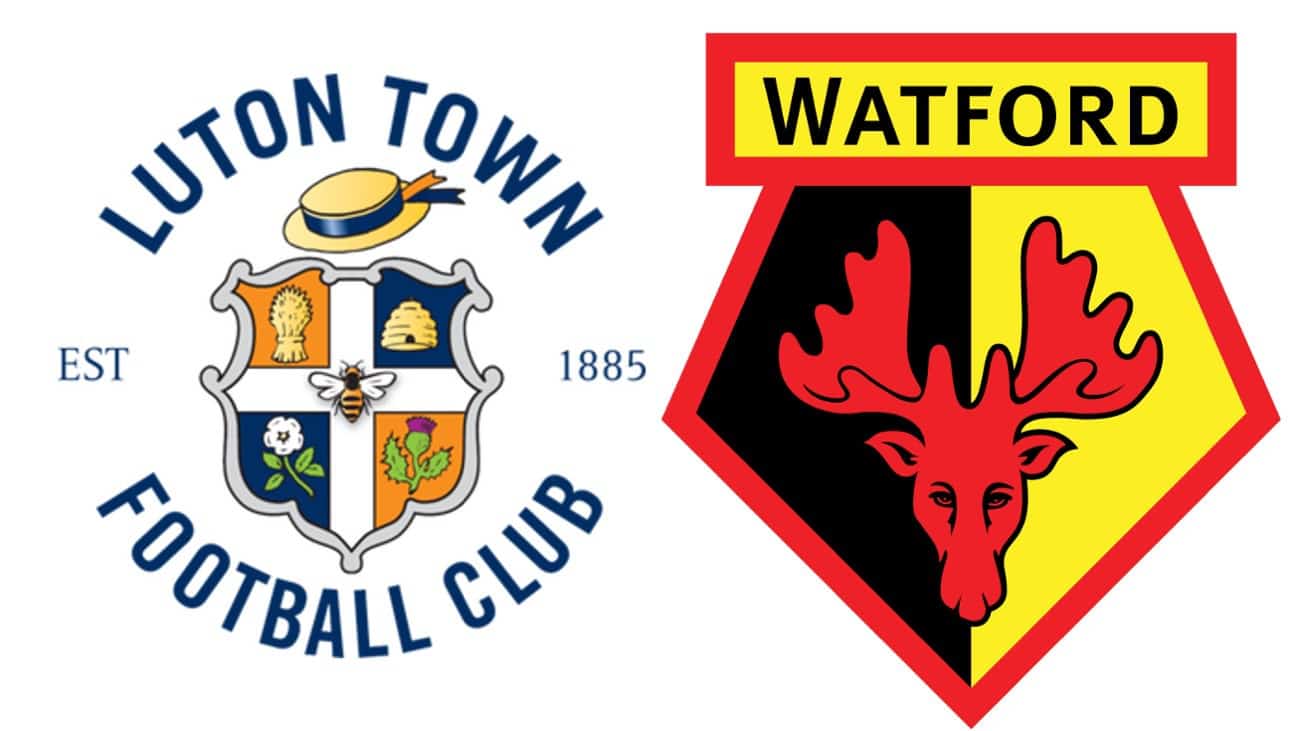 Getting to Know the Luton Town vs Watford Rivalry

The rivalry between Watford and Luton Town, sometimes known as the Beds-Herts Derby, goes back over 100 years and is one of the more bitter derbies in English football.

Chances are, though, you don’t know much about it. The two teams will not meet in the 2021-22 season after Watford was promoted to the Premier League. But, we still want to share this north-of-London battle.

The two stadiums are just 20 miles apart, with Watford in Hertfordshire and Luton in Bedfordshire, leading to the nickname Beds-Herts Derby. The media also like to call it the M1 Derby for a highway that passes near each ground. They do the same thing, by the way, with the Crystal Palace – Brighton rivalry, calling it the M23 Derby even though it’s the A23 that comes closest to connecting the two.

First, as we do with all of our posts on the top derbies in English soccer, let’s review the history of each club in excerpts from our book, The Groundhopper Guide to Soccer in England. 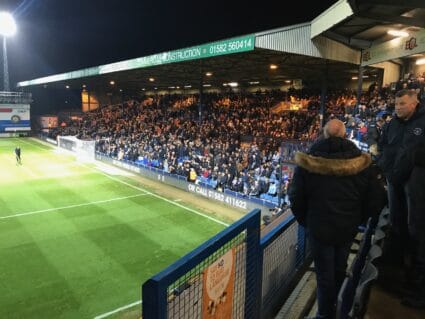 If we told you Luton Town was founded in 1885 and have been playing at Kenilworth Road since 1905, and then you walked into the place, you’d probably say, “Yeah, that seems about right.” In fact, you would be at the first club in the south of England to go fully professional, in 1891. And no, those seats are not from those days.

For more on their fabulous dump of a ground, check out Groundhopper Paul’s visit to Kenilworth Road.

Known as the Hatters because the town was once home to a straw hat industry, their first glory days were the 1950s, when record goal-scorer Gordon Turner was banging them in and the Hatters were in the First Division. They finished second in 1955 and lost the 1959 FA Cup Final to Nottingham Forest when Turner was out injured. When that team broke up, the Hatters dropped pretty quickly down to the fourth tier.

They climbed slowly back up starting in the 1970s, making the top tier again in the 1980s and beating Arsenal in a 3–2 thriller to win the 1988 League Cup. That year they also made the FA Cup semifinals and were ninth in the league. The next year they made the League Cup Final again but lost to Forest. Some might suggest that their success in these years owed in part to an artificial surface at home (very rare then and now) and the club banning all away fans for a couple of years due to hooliganism.

They climbed to the top tier again in the 2000s, but then a crazy owner left them in administration. Then came the thunderbolt of an FA investigation into illegal payments to players’ agents, which resulted in a ten-point deduction one season and thirty the next — the largest amount in the league’s history. Although they won the League Trophy in 2009 in front of 40,000 Hatters supporters at Wembley, they dropped out of the Football League days later and spent the next five seasons in what is now the National League.

Paul is sure that a Luton Town fan reading the previous paragraph would wish to add layers to this story, and we can all probably agree that, say, Manchester City might not have been docked forty points for similar infractions. We don’t know the whole story and Paul didn’t ask his neighbors at the game. But he did see a sign at the ground that read, “Established 1885, Betrayed by the FA 2008.” So let’s assume there’s some deeply held bitterness about all this.

Anyway, they got back to League Two in 2014, then successive promotions in 2018 and 2019 landed them in the Championship, where they have played the last two seasons, finishing nineteenth and avoiding relegation by just three points in 2019-20 and climbing up to 12th place last season. 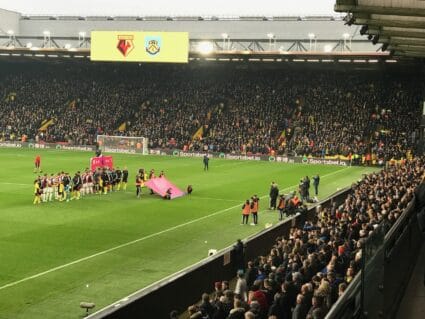 We can kind of skip ahead here. Watford was formed in 1881, joined the Football League in 1921, and basically spent the next sixty years in the third tier. It was in 1976 that their modern history started — with a rather unusual source.

A certain Reginald Kenneth Dwight grew up in the area. He stood on the Watford FC terraces and then made a bit of money in the entertainment business after changing his name to Elton John. He bought his favorite club in 1976 — who gets to do that? — and said he was taking them to the top. They were in the Fourth Division at the time.

He hired Graham Taylor as manager, and off they went. They crushed the Fourth Division in Taylor’s first year and, by 1982, were all the way up in the First. Incredibly, that season they finished second behind Liverpool, thus qualifying for the UEFA Cup (today’s Europa League). So in seven years, they went from playing Hartlepool and Northampton Town to losing to Sparta Prague in the third round of Europe!

They lost the 1984 FA Cup final to Everton, but of course this couldn’t last. Taylor left for Aston Villa in 1987, and Watford were relegated the next season. They were back in the third tier within ten years. Taylor came back in the late ’90s, secured two straight promotions to the new Premier League, then retired for good in 2001. They would pop up a couple of times in the Premier League over the next several seasons. Sir Elton sold the club in 2002 but remains its honorary life president.

They got back in the Premier League in 2015, and lost the final of the 2018–19 FA Cup, and stayed in the top flight for five seasons. The magic ran out when they dropped back into the Championship after finishing 19th in the Premier League in 2019-20, but a second place finish last season has Watford back up in the top tier for the 2021-22 season. 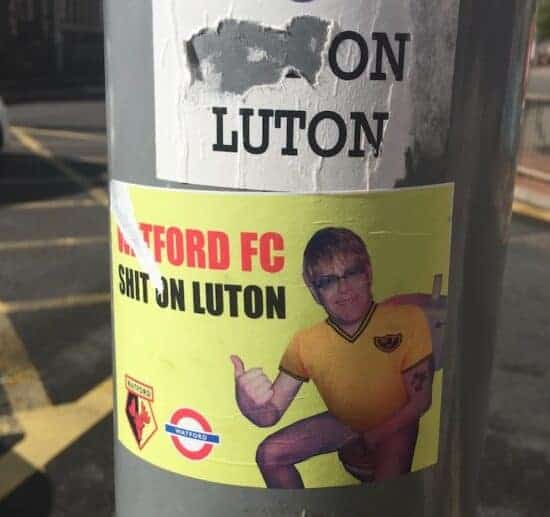 Sir Elton, spotted on the way to Watford’s Vicarage Road.

History of the Luton Town vs Watford Rivalry

This rivalry originates from being close to one another geographically and continuously running into each other on the pitch. They were both founded in the 1880s, first met in the 1898-99 FA Cup, and have played 119 times since. Recent viewers of the Premier League may be surprised to know that Luton lead the series with 53 wins to 37 for Watford and 29 draws.

They met regularly through the 1930s, but when Luton Town were promoted in 1937, it separated them for some 30 years. By the time both made the First Division in the 1980s, things were properly intense. 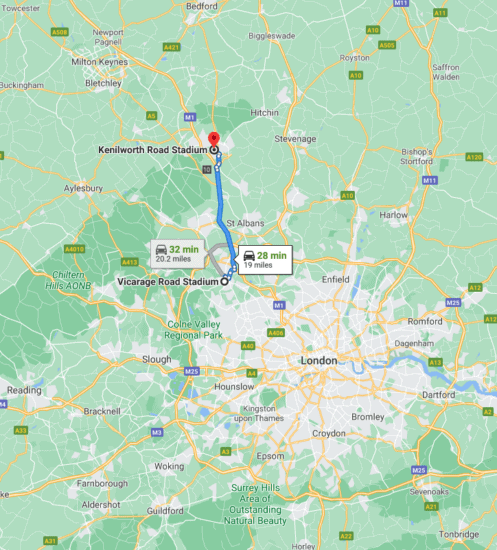 Luton Town and Watford are well within shouting distance.

The two clubs were both relegated in the 1990s, and they wound up meeting in the second and third tiers six times in that decade. Watford, though, eventually took off and left Luton in lower leagues from 1998 until 2020, with one exception: They were together in the Championship for the 2005-06 season, when Watford won promotion just before Luton fell apart.

For the 2020-21 season, they found themselves facing each other again after Luton rallied and Watford stumbled. The two teams split the matchups, each winning 1-0 on their home field.

Luton Town vs Watford: The Banter

Luton Town fans will point to their 1988 League Cup trophy and Watford’s empty major-trophy cabinet, while Watford fans will ask where the Hatters have been while the Hornets were playing in the Premier League. Luton fans will say Watford have delusions of grandeur from some uneventful Premier League seasons and a couple of FA Cup Final losses (to Luton’s 1), while the Hornets will say go back to your dump of a ground. Luton might respond that at least we have character and a proper fan base, and Watford fans (at least the older ones) will taunt about the plastic pitch Luton had back in the 80s and 90s.

This one was rescheduled from Boxing Day, when it had to be abandoned due to fog. We can’t find video of it, which is a shame because it had three red cards, was followed by crowd trouble in a neighboring town claimed by both factions, and is generally credited by both sets of supporters as “the one that really started it.”

Watford won this one, 2-1, at Luton, but their captain Wilf Rostron was sent off, in a decision which we think even some Luton fans seem to know was unwarranted. This disqualified him for the next game, which was an FA Cup Final. Watford lost that one, which Watford fans say wouldn’t have happened with Rostron on the pitch — therefore it was Luton’s fault.

The first go-round ended 0-0 at Luton, the replay just two days later 2-2 at Watford. So, three days after that, they met again at Luton!

Check out Sir Elton at 1:10. We’ll also add that much of Kenilworth Road hasn’t changed a lot since then.

The biggest ever win in the Watford-Luton Rivalry was a 5-0 for Luton back in the 20s, but there have been two that finished 4-0 — both to the visitors! Here’s one from 1997 at Luton Town. And it only took the Hornets 32 minutes to score all four goals.

Yes, crowd trouble in 2002, which seems a little late from the outside. And this was proper crowd trouble, hours of it before and after the game in Watford, and even a fair amount on the pitch pregame. In all, 29 folks were arrested, several Luton fans were banned for life, and Luton won the League Cup tie, 2-1.

(Sorry about the music here.)