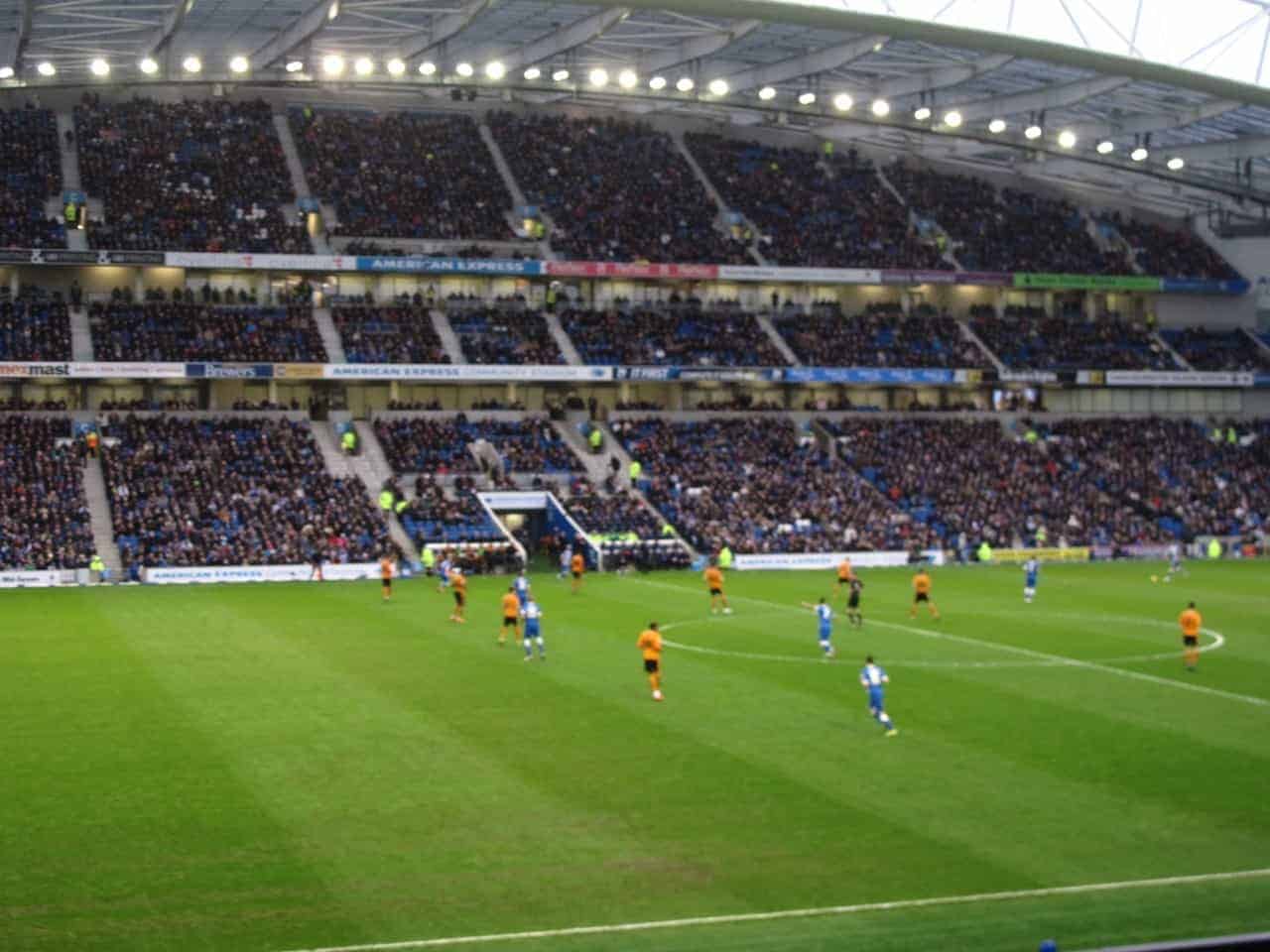 What is Up With the Brighton-Crystal Palace Rivalry?

When you consider all of the top derbies in English soccer, you generally think of three characteristics: regional proximity, a long history, and battling for honors.

In the case of the rivalry between Crystal Palace and Brighton and Hove Albion, literally none of that is the case. In fact, people don’t even agree on the name of the thing: Is it the A23 Derby or the M23 Derby?

Well, both, sort of. And Brighton vs Palace has an origin story which, even if it lacks the above characteristics, is just as petty, tribal and strongly held as the Liverpool-Manchester United North West Derby or the Wolves-West Brom Black Country Derby.

Let’s start with a brief historical sketch of each club, adapted from our book, A Groundhopper Guide to Soccer in England. Buy your copy today!

Brighton was founded in 1901 and bounced around the lower leagues until 1979, when they made the top division for the first time, staying there for four years. In 1983 they lost the FA Cup final in a replay to Manchester United. They were also relegated after that season.

By the mid-1990s, they were bottom of the fourth tier and in such bad financial shape they had to sell their stadium. In the last game of the 1996–97 season, Robbie Reinelt scored a last-minute goal just to keep them in the Football League.

As they rebuilt from there, they had to play two seasons at Gillingham FC’s stadium seventy-five miles away, and they spent twelve years at a local athletics stadium with a capacity around 9,000. But rebuild they did, making the Championship in 2007 and the Premier League in 2018. Along the way, they opened the terrific Falmer (Amex) Stadium, and getting there to see a game — in addition to checking out the cool city of Brighton — is highly recommended. 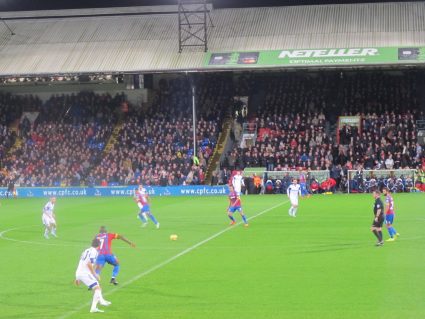 Very briefly, yes, there was in fact a Crystal Palace. It was built for an 1851 exhibition in Hyde Park, then was moved to South London afterwards and gave its name to that neighborhood. It burned down in 1936.

Meanwhile, a stadium was built by the palace and hosted FA Cup Finals until 1914. But the owners wanted more games, so they formed Crystal Palace Football Club in 1905. The Glaziers, as they were known for the glass in the palace, joined the Football League in 1920 and moved to their current home (Selhurst Park, not in the Crystal Palace area!) in 1924.

They didn’t make the top flight until 1969. They did some serious yo-yoing during the 1970s, dropping to the third tier and then making it all the way back up before financial troubles brought about another relegation to the second tier in 1981. The next thirty years were a dizzying array of promotions, relegations, near misses, managers, and financial problems.

In 2010 during their second bankruptcy, a group of wealthy fans bought them, and they made it back to the Premier League via the playoffs in 2013. They have been there ever since. 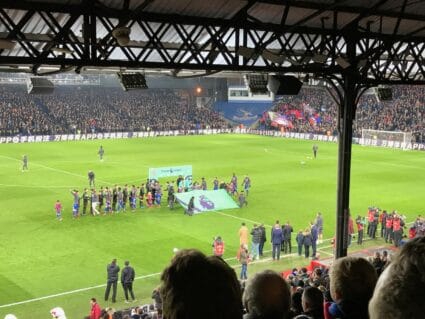 Teams coming out at Selhurst Park.

Why Do Brighton and Crystal Palace Hate Each Other?

And now we arrive at the heart of the matter. Let’s start with the name. Many people, including the media, call it the M23 Derby, which actually makes no sense because that road doesn’t connect the two clubs. The A23 does, more or less. So count that among the oddities of the Palace-Brighton rivalry.

The other oddity is the distance between the two, a relatively large 37 miles. However, until 2011, when Crawley Town made the Football League, Palace was the closest professional club to Brighton. But that still didn’t make them rivals.

The hatred started in the 1970s, when both teams were chasing promotion and kept running into each other. Crowds kept getting bigger and more troublesome, games were hotly contested, and then in 1976 each club hired a new manager. Those two men, Terry Venables at Palace and Alan Mullery at Brighton, had been teammates at Tottenham Hotspur and did not like each other. And that 1976-77 season is when it kicked off.

First they had a league game repeatedly stopped by crowd trouble. Then they were drawn together in the FA Cup and had to go through two replays, the last at Chelsea’s Stamford Bridge. Palace got an early goal in that one, Brighton had two goals waved off under controversial circumstances, and after Palace advanced, Mullery, Brighton’s boss, got into it with Palace fans, then stormed into the Palace locker room, threw £5 on a table, and told Venables, “Your team’s not worth that.”

Both teams were promoted after the season, and meanwhile Palace had switched their nickname to Eagles and changed to red and blue shirts. So Brighton changed to the Seagulls. Did I mention this Brighton-Palace thing is petty?

In 1979 they again finished first and second, sharing promotion for the second time in three seasons.

Promotion and Relegation are explained in this blog post and this video:

One Thing After Another

The incidents kept piling up. Palace actually hired Mullery as their manager, which resulted in angry fans, lower attendances, and two losses to the Seagulls. Needless to say, Mullery moved on.

In 1985, a Palace tackle broke the leg, and ended the career, of a popular Brighton player. After that game there was widespread fan trouble, this being the height of the hooligan days.

Yes, Somebody Took a Crap in the Locker Room

In the 2012-13 season, Palace and Brighton met four times: twice in the league and again in a two-legged playoff for promotion. This is where things get weird. After a 0-0 finish in the first leg at Palace, the Eagles showed up at Brighton to find human feces spread all over their locker room. It was later attributed to Brighton’s coach driver, but anyway, it didn’t work. Palace won, 2-0, then beat Watford in the playoff final to gain promotion.

When Brighton came up to the Premier League several years later, the fun just kept on coming. There was fan trouble in 2017, a 3-2 FA Cup tie in 2018, and later that year a red card for a headbutt. In 2020 there was another red card for a terrible two-footed tackle.

Here are All the Top Derbies
in English Soccer This Season

Current Status of the Brighton-Palace Rivalry

When the Eagles and Seagulls meet up during the 2021-22 Premier League season (Sept. 27 at Brighton and then Jan. 15 at Palace), it will be their 108th and 109th meetings in leagues and cups. Overall, Brighton have 40 wins to Palace’s 28, with 39 draws. Along the way, more than two dozen players have suited up for each club, which really just adds to the drama.

All in all, what Brighton and Crystal Palace lack in proximity, trophies, great players and anything else that would normally be part of a great rivalry, they more than make up for in a shared and recent history of simply running into each other too often, with too much on the line, with too many personalities involved.

Palace and Brighton simply don’t like each other. So whatever you want to call it — the A23 Derby, the M23 Derby, or just the Brighton-Crystal Palace Rivalry — you want to pay attention when these two get together.