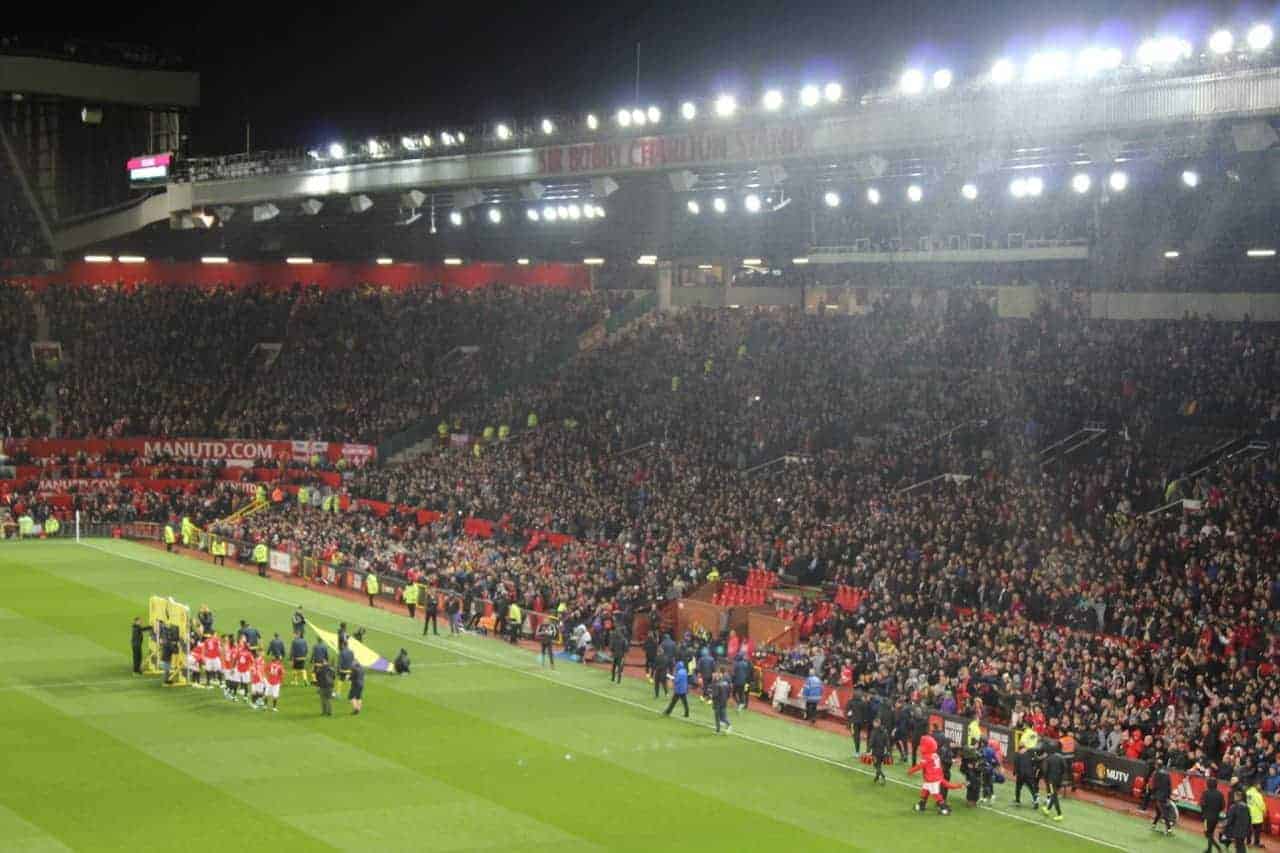 Liverpool vs Manchester United: The Biggest Rivalry in English Football

All the great English football rivalries contain some combination of proximity, a history that goes beyond football, and a shared level of success. That all comes together like nowhere else in the North West Derby, Manchester United vs Liverpool. 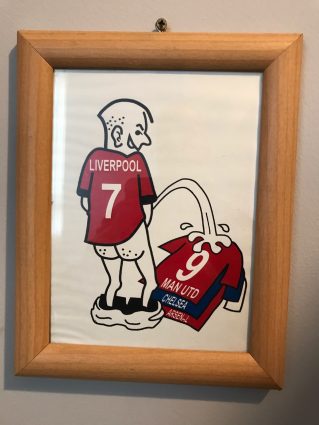 This pretty well sums up feelings on Merseyside when it comes to the rivalry with Manchester United.

Since we here at Groundhopper Guides love to explore and explain the world of English football, and since we love a bitter rivalry above almost anything else, let’s take a look at Liverpool-Man United, the greatest rivalry of them all.

Man U vs Liverpool is Much More Than a Football Rivalry

Like so many things in England, this goes way back. Three hundred years ago, as the Industrial Revolution was taking off, Manchester became a massive city, the biggest in the North of England and the world capital of the cotton trade. Liverpool, some 30 miles to the west, was smaller but also important as a seaport. Through the 19th century, the cities were connected by canals and the world’s first inter-city railway, and Liverpool gradually came to be larger than Manchester.

But as they were also Manchester’s connection to the sea, they had leverage over the city. So Manchester decided to build their own canal, straight to the ocean, bypassing Liverpool’s docks and fees. Liverpool was not pleased, but despite their opposition, multiple delays, and a cost of nearly £2 billion in today’s money, the Manchester Ship Canal opened in 1894. (This is why there’s a ship in the Man U crest, by the way.)

A few months later, two-year-old Liverpool Football Club played, for the first time, a local Manchester club called Newton Heath, which had been formed in 1878 by railway workers. It was a playoff game, and the 2-0 Liverpool win relegated Newton Heath to the Second Division. Eight years later, Newton Heath changed their name to Manchester United.

Much of the Liverpool – Man U rivalry is based on the historic greatness of both clubs. This is in the players’ tunnel at Liverpool’s Anfield.

Liverpool vs Man U: Results

To say these two are the biggest football clubs in England would be a bit of an understatement. Between them, they have won 39 league titles, 19 FA Cups, 13 League Cups, 36 FA Community Shields, nine European Cups (now known as the Champions League), four UEFA Cups (now known as the Europa League), one UEFA Cup Winners’ Cup, five UEFA Super Cups, one Intercontinental Cup and two FIFA Club World Cups.

As for actual Man U – Liverpool results, it’s slightly in favor of the Mancunians over the Scousers. Manchester United has, as of this writing before the start of the 2021-22 Premier League season, 80 wins to Liverpool’s 68, and there have been 58 draws. Each club claims a particular title over the other: Man U have won the league 20 times to Liverpool’s 19 (and a total of 66 trophies to 65), while Liverpool have won the European Cup / Champions League six times to Man U’s three. There are, of course, songs about all of this booming out from each set of fans on match day.

A Brief History of the Man U – Liverpool Rivalry 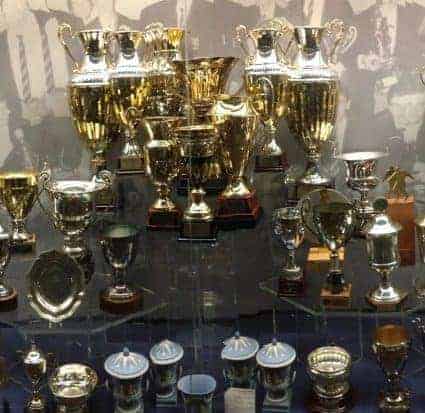 A selection of the trophy case at Manchester United, three-time European champions.

If you’ve only been paying attention to English football for a short time, you might not realize that neither of these teams has always been great.

United won two league titles before 1911, then nothing for almost 40 years. It was only in the 1950s they began to dominate, with three league titles and two European Cup semifinal runs in that decade. However, the team known as the “Busby Babes” for their manager and youth, was in a deadly airplane crash in Munich in 1958; eight players and three staff perished. It took five years to rebuild from that, but in the 60s United won two more league titles, another FA Cup, and in 1968 became the first English team to be crowned champions of Europe.

Liverpool, meanwhile, had a somewhat similar story: a couple of league wins in the 1910s, another in 1922, and a fourth in 1947. But in 1959, as a Second Division club, they hired Bill Shankly as their manager. Starting with a league title in 1964, Liverpool under Shankly — succeeded by his assistants Bob Paisley and Joe Fagan, and later by player Kenny Dalglish — came to dominate English football. From 1972 to 1990 they finished first or second in the league all but one season, winning it eleven times. In that same period, they also won Europe four times.

It’s fair to say that it was in the 1960s that the Liverpool – Manchester United rivalry became what it is today.

But Man U fell apart in the 1970s — they actually got relegated for a season! — and, despite winning a few FA Cups, they didn’t win the league again until 1993, under their manager since 1986, Alex Ferguson.

It was Ferguson who famously told reporters his “greatest challenge was knocking Liverpool right off their fucking perch, and you can print that.” And so he did, claiming in 2013 the club’s 20th league title, then two more than Liverpool, who at that point were in the middle of a 30-year league drought. In the 21 previous seasons under Ferguson, United had finished below second in the league only twice — and both of those times they were third. 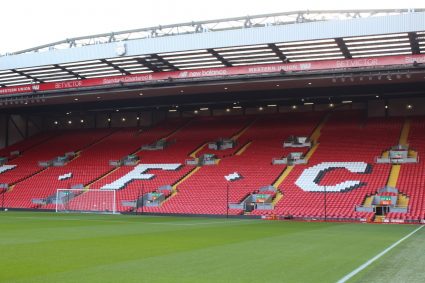 As Man U rose under Ferguson, Liverpool declined after their league win in 1990 — though they did claim a few more FA Cups and another European crown in 2005.

But the intensity of their rivalry with Man U never waned, because there was the regional rivalry behind it, because of all the trophies they shared, and because by now a generation or two of fans had grown up with one or both clubs at the very top of English and European football.

A final evidence of their hatred for one another: there has not been a single piece of direct business between the two — in other words, a player transfer from one to the other — since 1964. And in the Premier League era since 1992, only two players have played for both clubs.

Now, with Liverpool having recent success under Jurgen Klopp — European champions in 2019 and league winners in 2020 — and with an old Ferguson man in Ole Gunnar Solskjaer at the United helm and leading them to a second place league finish in 2021, we could be heading back into an era like the 1960s, with the two giants waging epic battles for every trophy in sight.

With more than 200 to choose from, how does one pick the greatest games in the North West Derby? Well, I’ve done my internet research and tried to pick a fair selection that each side can celebrate more or less equally. (Along those lines, have you noticed I keep switching out which team I put first in the name of the rivalry?)

United were just a few years separated from their relegation to the Second Division, and Liverpool were on top of the world. They seemed well on track to win a famous treble, and in fact did win both the league and their first European title that season. Not so the FA Cup — despite scoring first.

Word of warning: United are in red here.

A great game with two amazing goals from Liverpool’s Robbie Fowler. But it’s all about Eric Cantona, the King of Old Trafford, who returned for this game after an eight-month suspension served for his infamous karate kick of a Crystal Palace supporter. He returns the hero, sets up the first goal, then gets them a point at the end. Of course he did.

Just a few months later, the great rivals meet at Wembley, and it’s 0-0 with four minutes left. A corner comes in, the keeper semi-clears it, and it falls to… of course, Eric Cantona.

That one made United the first club to win two League Cup doubles.

This is the year United, here in red, won the treble after their Champions League Final heroics against Bayern Munich in Barcelona. The late winner in that one? Ole Gunnar Solksjaer. Hold that thought. Here they are on their way to the FA Cup win, highlighted by the famous Ryan Giggs goal in the semifinal. But first there was the small matter of Liverpool in Round Four at home, and a 1-0 deficit in the 88th minute.

Liverpool would win the FA Cup this season, and do the league double over United with this win, but the Red Devils went on to win the league, anyway.

Otherwise, this is all about the Gerrard goal. Fowler’s wasn’t bad, either.

Arsenal won a league and FA Cup double this season, but I wanted you to see this one mainly if you don’t know who John Arne Riise is. Say hello to his little friend, his left foot.

Whenever two great rivals meet in a Cup final, you have to include it. This is from the Millennium Stadium in Cardiff, where Cup finals were hosted while Wembley Stadium was being rebuilt.

The only highlight you need to see here is the one Liverpool fans never want to see again. It’s 0-0 late, United are down to 10 men, corner kick in front of the Kop for United, and of all the great names in the history of these two clubs, this one falls to… John O’Shea? He looks as surprised as anyone as he runs the length of the field to (A) celebrate with the United fans and (B) get the hell away from the Kop!

Liverpool’s biggest ever away win in the rivalry, made famous by Gerrard kissing the camera after his penalty made it 2-1, and by an amazing chip at the end to seal it.

Honorable mention to the FanZone broadcast (RIP), in which the Liverpool guy sings Monty Python and returns Gerrard’s kiss!

Neither team won anything this season, but this was a great game, and otherwise I’ll just say “Ladies and Gentlemen, Mr. Dimitar Berbatov.”

2015 Premier League: Steven Gerrard and The Most Famous 38 Seconds of All Time

It’s halftime at Anfield, the game needs something, so on comes Liverpool legend Steven Gerrard. In less than a minute, he hits two big passes, crunches United’s Juana Mata, gets crunched by Ander Herrera, then stamps on Herrera’s leg and is sent off.