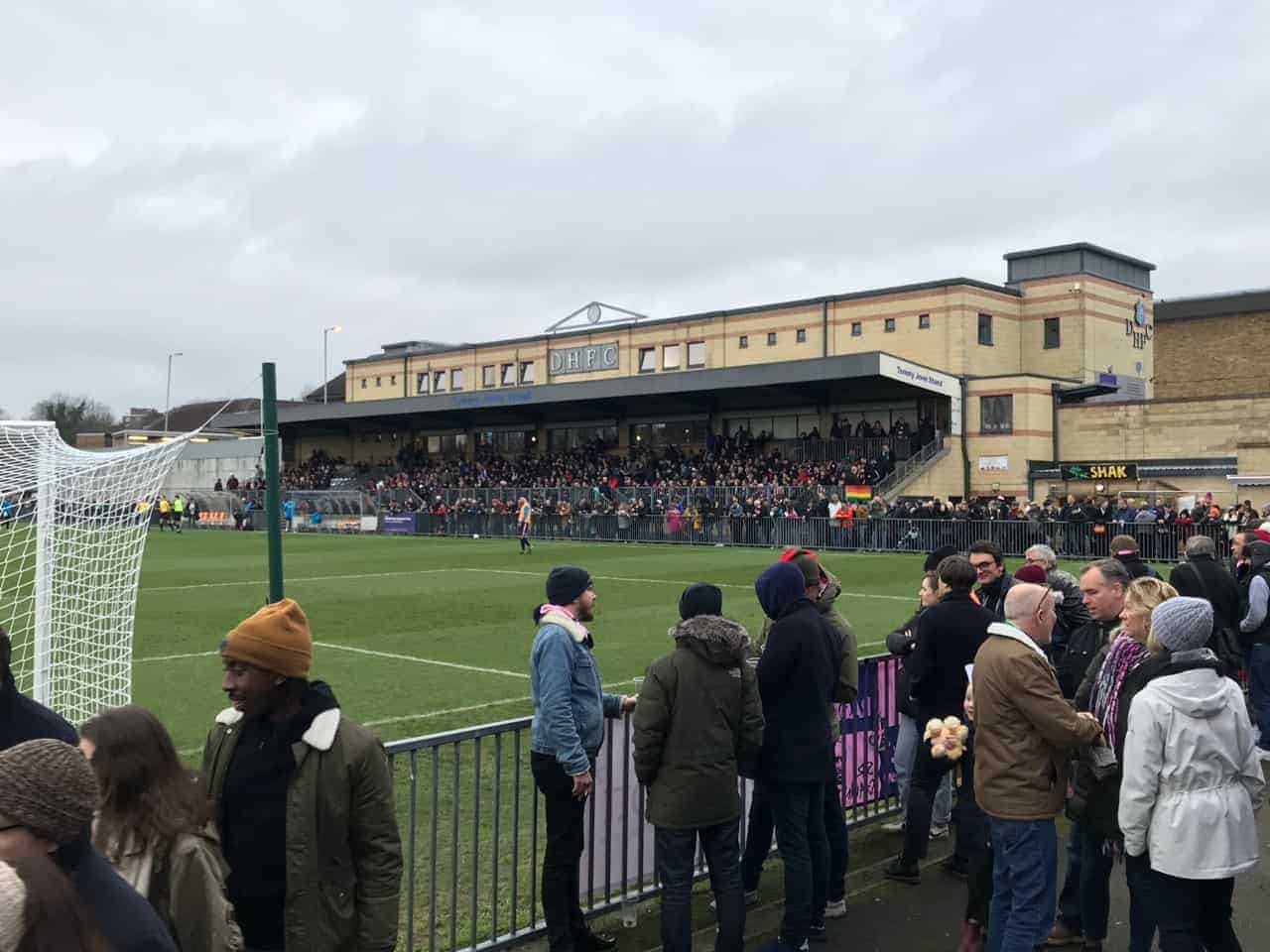 I had the honor of seeing Dulwich Hamlet FC’s Boxing Day (2018) return to their home ground of Champion Hill. Here’s a report, and an introduction to this famous little community club in South London. 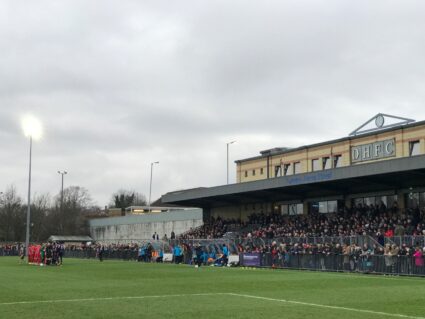 Out in South London, in a residential area next to a Sainsbury’s grocery store and behind a car wash, there is a football ground. It has one concrete stand with a dozen or so rows of seats and a bar in the back, and on the other three sides are terraces, one of them covered. Barely.

The image now in your head might actually surpass the reality on the ground. The terraces don’t even connect to one another, with the spaces in between being where people just lean up against the rail to take in the action.

It is humble, to say the least. And while you can’t yet grasp the humility of the scene, you are even farther short of the significance of this little club.

For this is Dulwich Hamlet Football Club, which lies at the complicated intersection of development, tradition and gentrification. And their home is named Champion Hill, which implies both something that hasn’t happened too often, which is to say championships, and something which is ongoing: a thing being defended, or a hill that one might be willing to die on.

Dulwich Hamlet is also, as I found out one recent Boxing Day, a brilliant place to catch some soccer in the capital. But we’ll get to the game in a bit. 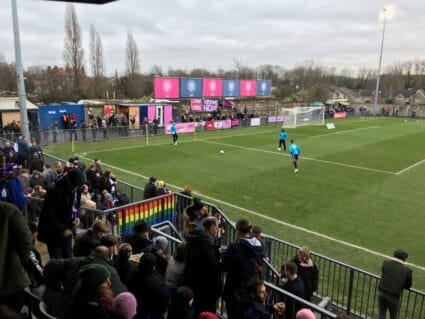 The club was formed in 1893 and spent 100 years or so in a division now called the Isthmian League, which occupies tiers 7 and 8 of the English football pyramid of leagues. They won that league several times, most recently in 1949, and won a lower division of it in 2013. This is a league where attendances are typically in the hundreds, if that.

They are five-time winners of the London Senior Cup, most recently in 2004; that’s a competition of the London Football Association.

They have played on this site near continuously since 1912, and their ground, Champion Hill, was first built in 1931. It was actually used in the 1948 Olympics, with South Korea beating Mexico 5-3. In the 1980s, when the club had financial trouble, they sold some of the land for the Sainsbury’s, and the current place opened in 1992.

More financial troubles have come along, and Hamlet was forced out of Champion Hill in March 2018 by the property’s owners, Meadow Residential. They played at Imperial Fields, the home of Tooting and Mitchum United, until December. 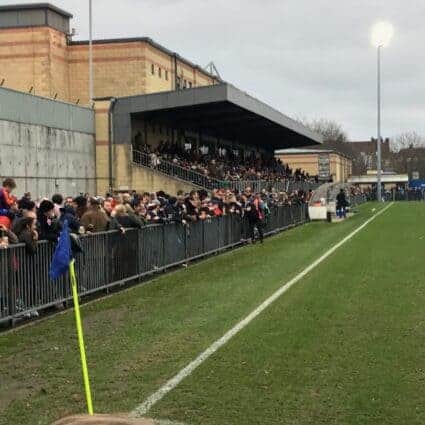 Ironically, it was while in exile that they finally got themselves promoted out of the Isthmian League. They beat Hendon on penalties to get up to the National League South, tier six of the pyramid. They are still there for the 2021-22 season.

In 2020, they even got permission to build a new ground at Champion Hill!

Meanwhile, London is becoming one of the most in-demand, and therefore expensive, places to live in the world. Housing prices are insane, which means there is money to be made in rents, which means that a big piece of property like, oh, a football ground, is worth a lot of money to somebody. Hence the ongoing dispute with Meadow Residential.

Also meanwhile, what exactly is a football club worth? Most of them, not much in a financial sense. And certainly not a little club like Dulwich Hamlet. But in emotional and psychological value, in historical sense, in the keeping of tradition, identity and a community’s sense of itself … well, some things are beyond measure, no?

Dulwich Hamlet have done quite well at attracting these new folks into their fold of supporters. They also seem to have taken on more than a little of progressive politics. 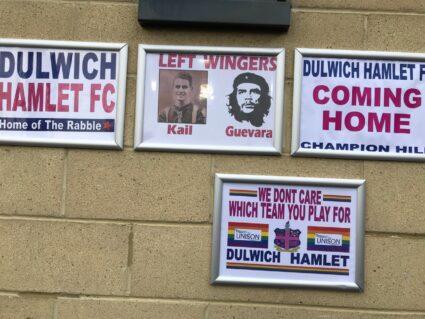 A little of the sense of humor on offer.

All of these things have come together of late, and I would like to send you now to The Guardian newspaper, where you can read this wonderful story about Dulwich Hamlet being literally kicked out of Champion Hill, winning promotion for the first time in 111 years, and then finally getting to come back home to where they belong. 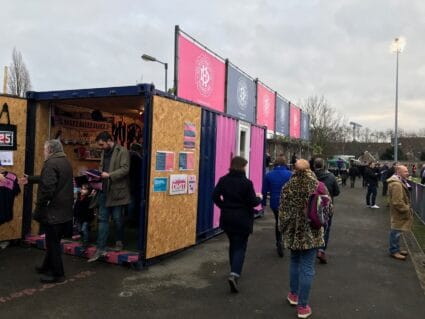 The Club Shop is in a converted shipping container.

This is where I show up in the story, for on their Boxing Day 2018 return, I was there with two good friends from South London and, officially, a record-tying 2,998 other folk to see them play Eastbourne Borough. There were 3,000 on hand because that is all they will sell, for safety reasons. 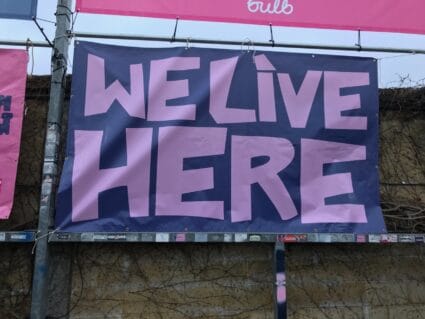 We took a bus over to the area and walked a bit, popped into the Sainsbury’s for a snack (which you can bring into the game) and then walked on in. I had bought us £12 tickets online, but I’m not sure anybody checked. Maybe they were just too happy.

And it was definitely a happy vibe at Champion Hill that day. Old friends were greeting each other, many beers were being bought, and when the PA announcer said “Welcome home to Champion Hill,” a big cheer went up all around the ground.

The crowd was just the mix I expected, a combination of young and old, the tattooed 20- and 30-somethings, black folks, white folks, Asian folks — the whole South London lot, really. And even without knowing the history from the Guardian story, it would be obvious you’re in a gentrifying neighborhood in which the newcomers have latched onto the local football club as a way to connect with each other and the community.

We took a walk around the ground, enjoying little touches like this sign across from the main stand: 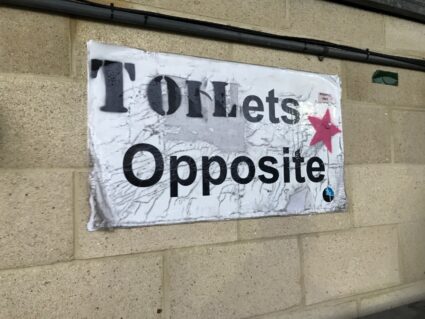 You know you’re at a small club when …

There were some messages left by and for the home fans, as well. 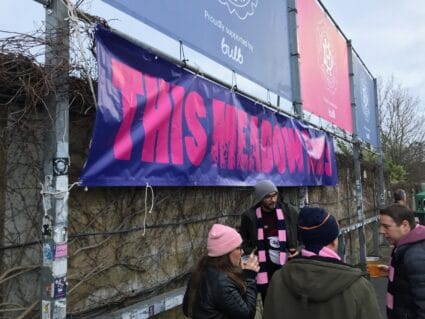 “This Meadow is Ours.”

One end was packed with The Rabble, Hamlet’s rowdy crew, so we took up spots on the other side, which was the, um, away end. That is, it was the location of the six or seven Borough fans, who despite their low numbers took up their assigned employment of singing songs about how great the Borough and Eastbourne are, to the amusement of us and our neighbors. 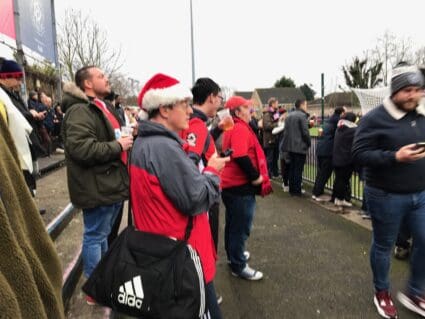 The game started pretty right, but eventually Hamlet got one. Then things loosened up, and the home side played some really great stuff. My friends are lifelong Arsenal fans with a soft spot for Crystal Palace, and I could tell that after years of following the Premier League, with all its money and superstars and television and borderline abuse of supporters, they were having a ball. And so was I. The football on offer was great fun, the crowd was into it, and we were no more than 15 yards from the goal. 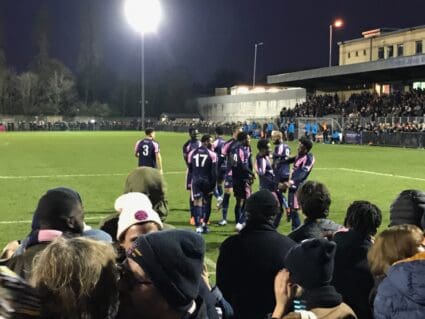 At halftime we went for another beverage, and when we got back the terrace was getting mighty crowded. It took us a while to figure out what was going on: the home fans were switching sides! I didn’t know anybody still did that. In the really old days, everybody would switch sides, so that your team was always attacking your end. But I’ve even run this by some old-timers who tell me that they didn’t know it still happens anywhere. (We would run into it again at Bromley of the National League, by the way.)

Hamlet got another one and won it, 2-0. We had a heck of a time watching the game and the crowd. A lot of them were looking at each other and their phones more than the game, but what the hell? Football is supposed to be fun, and a reason to get out with your friends and have a beer.

And that’s one last thing that was so great about Dulwich Hamlet, even though I don’t drink. I have long thought that it was simply illegal to drink beer while watching soccer in England, but here people were doing it right and left. I guess that law stops somewhere around the fifth tier? 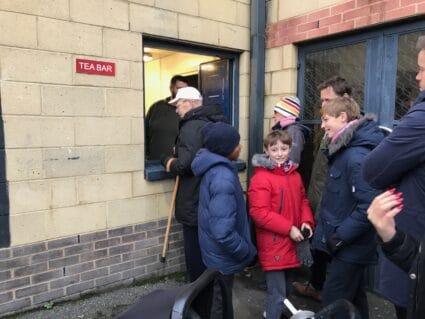 The line at the tea bar. 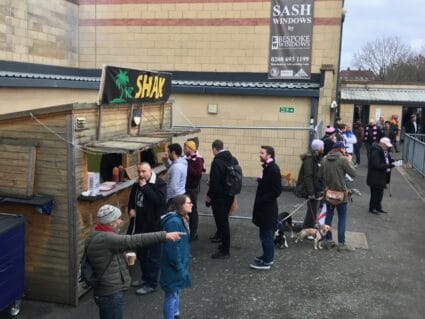 Jerk chicken and a beer, anyone?

All in all, Dulwich Hamlet is a great story and a great place to watch some football, in the old-fashioned way. And putting a bit of your money into the pockets of a club fighting for its survival, all the better!