Soccer in the Tokyo Summer Olympics

Groundhopper Guides has a look at soccer in the Olympics: the history, the men’s and women’s fields, and why you did not see “England” represented on either side in the 2020 Summer Olympics (which took place one year late due to Covid) in Tokyo, Japan. 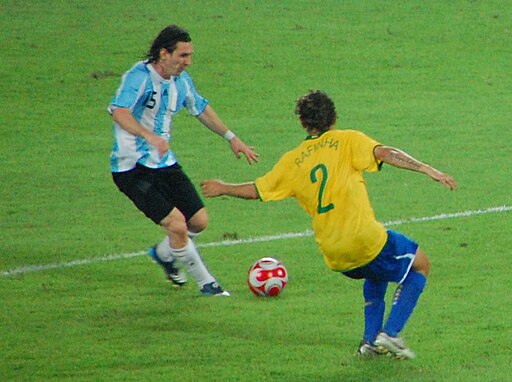 Lionel Messi, at age 21, playing for Argentina against Brazil in the 2008 Olympics. (Image by Andre Kiwitz via Wikimedia Commons)

History of Men’s Soccer at the Olympics

Not included in the first Olympic games in 1896, the sport made its debut in 1900 and 1904, but FIFA did not recognize those tournaments. In the London Games of 1908, a proper international tournament was played and featured six teams, all from Europe.

In the 1924 Olympic games, the first South American teams entered the competition.

FIFA once again intervened, and the sport was dropped from the 1932 Los Angeles Games, as the World Championship of Football (now the World Cup) took place for the first time in 1930. In 1936, soccer returned to the Olympics.

At first, as with all Olympic sports at the time, only amateurs could participate, but Olympic tournaments from 1948 to 1992 were dominated by the Soviet Union and its satellite countries because they fielded professional players. Between 1948 and 1980, 23 out of the 28 Olympic medals were won by teams from Eastern Europe.

For the 1984 Olympics in LA, the IOC decided to admit professional players from all countries. FIFA saw this as a threat and rival to the World Cup, so a compromise was reached: UEFA and CONMEBOL were age-restricted while everybody else was allowed to field a team as they saw fit. It was in 1992 that the IOC put an age limit in place for all countries. That’s why men’s soccer at the Olympics is for under-23 teams only.

Australia vs Germany at the 2016 Olympics. (Image by Rovena Rosa/Agência Brasil via Wikimedia Commons)

It’s a lot less complicated on the women’s side, since there is less history and because when Olympic women’s soccer began, FIFA simply didn’t care as much about the women’s World Cup.

The first women’s Olympic tournament was held in 1996, and the United States won gold four of the first six times, highlighted by three straight in 2004, 2008 and 2012. However, the U.S. did not medal in 2016; they were knocked out in the quarterfinals on PKs. Germany defeated Sweden in the final, 2-1.

There is no age limit on the women’s side, which is why the U.S. is led by such stars as Alex Morgan, Carli Lloyd and Megan Rapinoe.

Women’s Soccer at the Tokyo Olympics

The first- and second-place teams plus two of the three third-place squads advanced to the quarterfinals.

In the quarterfinals, Australia downed Great Britain in extra time (4-3), and Sweden defeated Japan 3-1. In the other half of the bracket, Canada advanced past Brazil on PKs (4-3) after a scoreless draw and the U.S. advanced on PKs over the Netherlands (4-2).

The quarterfinal winners advanced to the semifinals on August 2. For the first time since 2001, Canada defeated the U.S. (1-0), and in the other semifinal, Sweden defeated Australia also by a 1-0 score.

Canada went on to win its first-ever Olympic gold medal, as the final against Sweden went to PKs with Canada coming out on top 3-2. The U.S. claimed bronze with a 4-3 win over Australia.

Men’s Soccer in the 2020 Tokyo Olympics

In the men’s tournament, 16 teams were divided into four groups:

The first- and second-place teams advanced to the quarterfinals. Mexico over South Korea (6-3) and Spain over the Ivory Coast (5-2) saw a lot of goals in their quarterfinal matchups. Brazil downed Egypt 1-0, and after a scoreless 120 minutes, Japan advanced past New Zealand on PKs, 4-2.

The winners advanced to the semifinals on August 3, with Brazil beating Mexico on PKs (4-1) after a scoreless draw, and Spain downing Japan 1-0 in the other semifinal.

Brazil earned back-to-back Olympic gold medals by defeating Germany in 2016 as the host nation and then topping Spain 2-1 in extra time in 2020. Mexico scored 3-1 over Japan to come away with bronze.

Did the U.S. Men Play Soccer in the Tokyo Olympics? 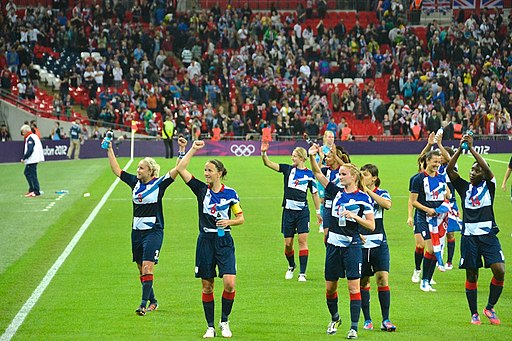 Team Great Britain at the 2012 Olympics in London. (Image by Gary Howden via Wikimedia Commons)

Was the English National Football Team in the Olympics?

Soccer fans might be wondering why England, Wales, Scotland, and Northern Ireland did not compete separately in the Olympics on both the men’s and women’s sides. It’s because those four countries combine into Team Great Britain during the Summer and Winter Olympics to compete as a unified entity.

Unlike the World Cup and the European Championships, which are governed by FIFA, the Olympics are run by the International Olympic Committee (IOC). In the IOC, the nations that make up the United Kingdom (UK) are officially registered as a single entity for Great Britain and compete as such.

In the 1950s, the soccer associations of Scotland, Wales and Northern Ireland did not want to be part of a shared Olympic team, fearing it would potentially affect their independence as single nations when competing in soccer in the eyes of FIFA.

Those three countries then withdrew, and prior to the 2012 Olympics, the UK had not fielded a men’s soccer team since 1972. For the 2012 Olympics, a compromise was reached, and only English and Welsh players took part for Team GB in London.

In 2016, neither the men’s nor women’s side were entered for the Olympics in Rio, as the four countries failed to reach an agreement.

Subsequently, there was no men’s Team GB squad for Tokyo 2020, but the four associations did allow a women’s team to participate this summer. They advanced to the quarterfinals before falling to Australia in extra time.

How to Watch the Tokyo Olympics in the U.S.

fuboTV provided NBCUniversal’s coverage of the XXXII Olympiad, which took place July 23-August 8, 2021, in Tokyo, Japan. fuboTV subscribers had access to NBCUniversal’s unprecedented 7,000 hours of Olympic programming, including coverage of all competition sessions with many content offerings in 4K High Dynamic Range (HDR).