What is the UEFA Nations League?

The UEFA Nations League is a biennial international soccer competition featuring the senior men’s national teams of the 55 member associations of UEFA, the football confederation of Europe.

Also, the UEFA Nations League is not actually a league; it’s a tournament. We’ve tried to explain it in the simplest terms below.

First, it helps to understand how the world of football is organized. It’s all run by FIFA, the governing body of world football. FIFA is divided into six geographical regions (called confederations), and within each region there are three big competitions:

In Europe, the confederation is UEFA. The main tournament, the Euros, is held every four years. We have a post explaining the Euros competition.

Essentially, UEFA determined that players were not getting the opportunity to compete in enough high-quality football games at the national level, so they created another tournament, the UEFA Nations League, to fill in the gaps between the Euros and the World Cup. In essence, this tournament replaced a lot of non-competitive “friendly” matches on the calendar. 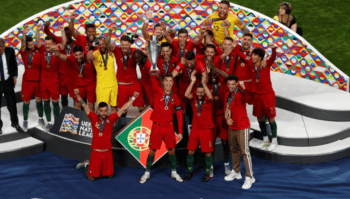 A little more reference for our US readers: The US is part of the FIFA confederation known as CONCACAF. Within that, we have World Cup qualifying, the Gold Cup tournament of nations every odd year, and the CONCACAF Champions League.

Note that there is also a CONCACAF Nations League involving the men’s national teams of the 41 member associations of CONCACAF. It has a similar structure and schedule as the UEFA Nations League.

This video is a great introduction to world football structure:

Format of the UEFA Nations League

While some changes have been made since the first Nations League tournament was held in 2018-19, the current format is comprised of four divisions, called leagues, three of which (A, B, C) have 16 teams each, and the fourth (D) has seven teams. Leagues A, B and C are divided into four groups (A1, A2, A3, A4; B1, B2…; etc.) of four teams each. League D is divided into two groups, one with four teams and one with three teams. Assignment to a league is based on UEFA’s coefficient ranking system plus each country’s finish in the previous season’s competition.

For the 2022-23 competition, teams will play all their group opponents home and away in June and September 2022. 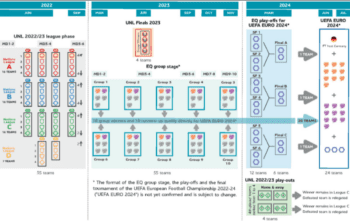 Group winners are determined by total number of points earned during the group phase of the competition (three points for a win, one for a draw, and none for a defeat). If two or more teams have the same number of points, the group winner is determined first by who obtained the most points in group matches played between the teams in question; then by goal difference; then by higher number of goals scored. There are additional tie-breaking criteria should teams still have an equal ranking after the previous calculations are applied.

On completion of the group phase, final group standings are compiled based on the number of points obtained by each team in the group.

Each nation in the four-nation groups then moves on, according to this format: 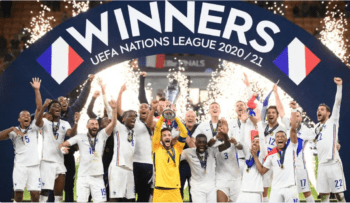 France won the second edition of the Nations League in 2021. (Photo: AFP via Getty Images)

Play-outs, to determine the two teams that are relegated from League C to League D for the next edition of the competition, will take place in March 2024.

A PDF of the fixture list by league can be found here.

Watch the Nations League on TV

You can stream selected fixtures featuring the top teams in the UEFA Nations League on fuboTV in the US:

How to Buy Tickets to Nations League Fixtures in England

Groundhopper Guides is an authorized reseller of tickets and hospitality for UEFA Nations League games at Wembley Stadium. Learn more about how we can help you see a game at Wembley. We currently have options for the following fixtures:

The other two games (in June 2022) will be played at Wolverhampton Wanderers’ Molineux Stadium. Groundhopper Guides does not have a partnership with any brokers who sell tickets for games at Molineux.

Looking to see a Nations League game? Fill out the form below and we’ll get back to you. Be sure to check your spam folder for our response!