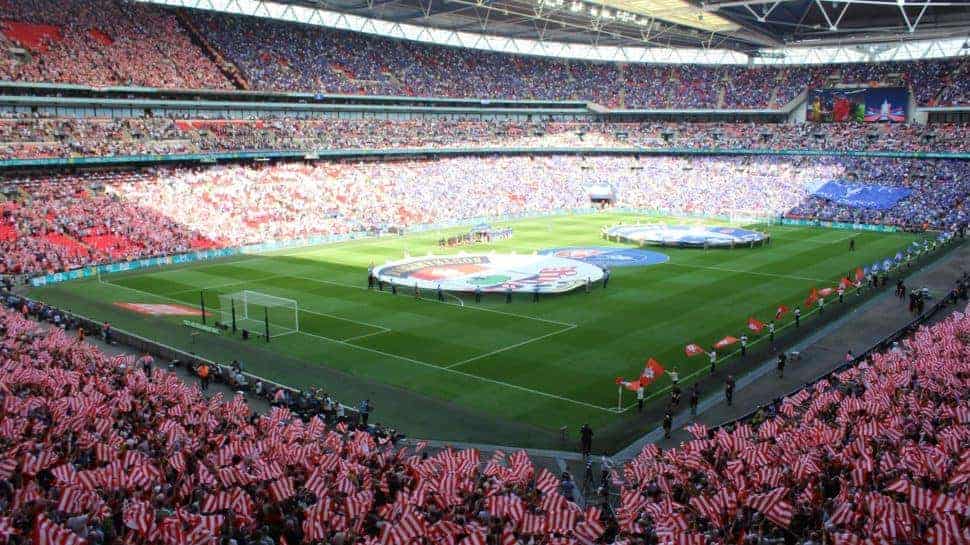 The semifinals and final of the FA Cup are at Wembley Stadium, shown here before a recent semifinal between Southampton and Chelsea.

It is the oldest knockout football competition in the world, and this year, 737 clubs were accepted out of 889 applicants up and down the pyramid of English football leagues. There is no bracket in the FA Cup; clubs are drawn at random for each round, with the first to come out as the home team and the second the visitors. Early rounds are regionalized to keep travel costs to a minimum.

As each round occurs, clubs from farther up the pyramid enter the draw. The fully professional clubs of the Football League enter for the First Round Proper; Premier League clubs enter in the Third Round Proper.

This year’s Cup is beginning weeks later than usual because of the Covid-19 pandemic. Due to this shortened schedule, and for the first time ever, there are no replays in this year’s competition. Payouts to clubs have also been reduced. 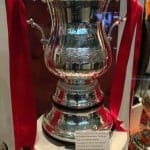 A replica of the FA Cup at the National Football Museum in Manchester.

Here is more about the FA Cup, which, by the way, is officially known as the Football Association Challenge Cup.

Arsenal are the defending champions, having won the competition a record 14 times.

Seventy-four more clubs enter along with the winners from the previous round, for 117 games, with winners receiving £2,250 and losers £750.

Forty-three more clubs join the winners from the previous round, coming from level 6 of the pyramid, the National League North and South. This round has 80 games, with winners receiving £3,375 and losers £1,125.

There are no new entries this time, just the 80 winners from Second Round Qualifying playing a total of 40 matches. Winners get £5,625 and losers £1,875.

This is when the fully-professional clubs from the Football League begin to enter the fray. A total of 48 clubs from League One and League Two, the third and fourth tiers, join the 32 qualifying winners for a total of 40 games, with winners receiving £22,629.

Watch FA Cup matches in the US on ESPN+.

This is where the clubs that you’ve heard of start to play. Twenty winners from the previous round are joined here by the 24 teams from the Football League Championship plus the 20 members of the Premier League. That makes 64 teams and 32 matches over the weekend, with winners receiving £82,000.

This is the Round of 32, with winners advancing from the Third Round for a total of 16 matches across the weekend. Winners receive £90,000.

Again, during this weekend, the regular Premier League and Championship schedule takes a week off.

This is the Round of 16, with winners advancing from the Fourth Round for a total of 8 matches across the weekend. Winners receive £180,000.

Eight winners advance from the Fifth Round for a total of four matches across the weekend. Winners receive £360,000.

Quarterfinal winners play on Saturday and Sunday at Wembley Stadium, with each club receiving around 35,000 tickets for their supporters. Winners receive £900,000 and losers £450,000.

Semifinal winners meet at Wembley Stadium, again with each club getting about 35,000 tickets. Winners receive £1.8 million and losers £900,000.