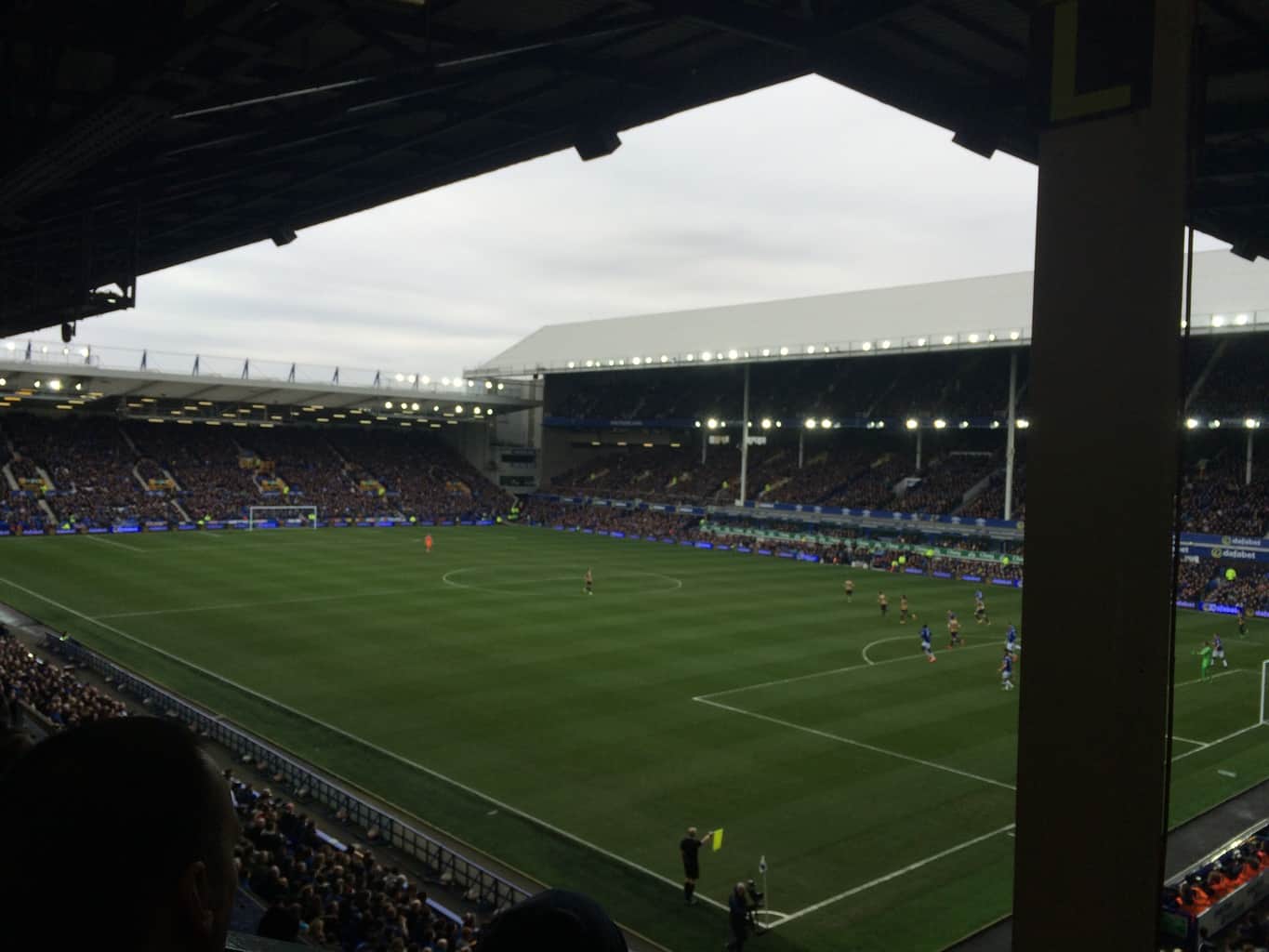 Groundhopper Dean from Canada, who previously went for some VIP treatment at Fleetwood Town, returned recently to check out a Premier League game featuring Everton vs Arsenal at Goodison Park in Liverpool. 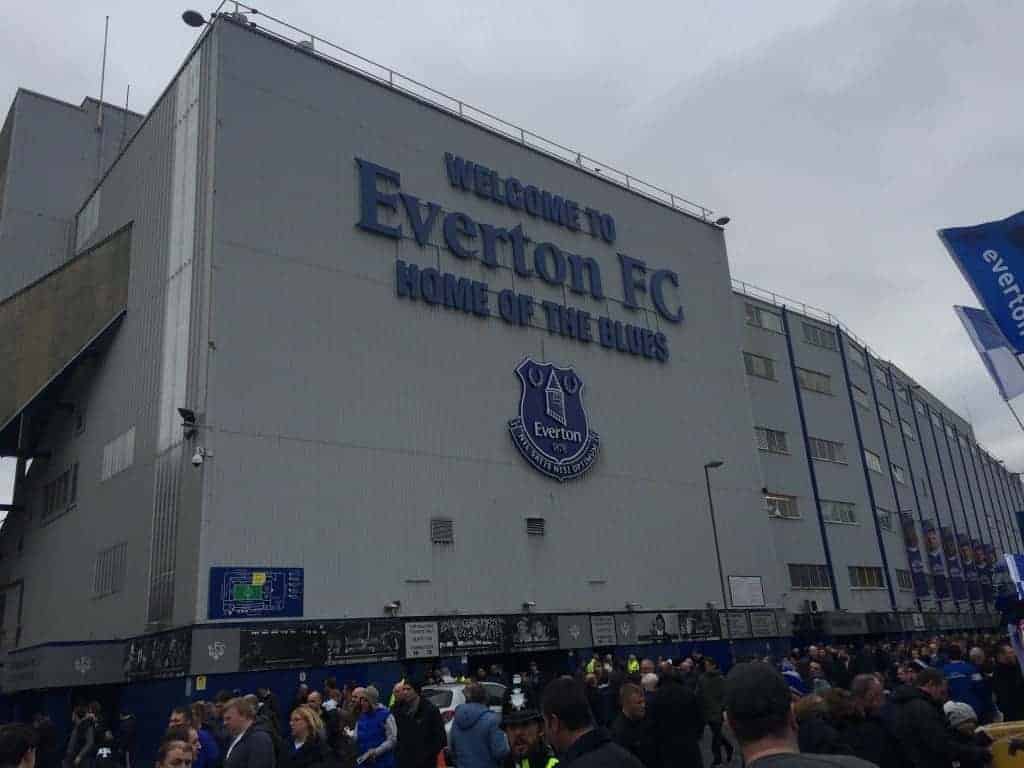 First, some of our back-and-forth leading up to his trip.

Dean: My son and I will be staying in Garstang, Lancashire for friday and saturday night and hoping to take in a soccer match while in UK.  We are trying to decide between the Everton vs, Arsenal match or the Manchester vs Manchester match. Are you able to help us to purchase tickets and possibly a tour?

I referred him to a tour guide I know there, and she said:

The Arsenal game will be at 12:45pm on 19th and the Manchester derby will be at 4pm on the 20th. The Arsenal tickets will not be on sale until the 29th February, then you can ring the ticket office up and they will find you the best tickets and prices on 0151 556 1878 or email:  customer.contactcentre@evertonfc.com

As for tours, they run every Monday Wednesday and Friday at 11 am and 1 pm, and every Sunday at 10 am  12pm  2pm  3pm  and 4pm (except on match days). However as the Arsenal game is running on Saturday 19th; this means there will only be a 11am tour on Friday 18th, but tours on the following Sunday 20th will run usual times.

The tour last around 70 mins and you will be allowed to visit the changing rooms, the directors box, walk down the tunnel to z cars and learn about all the history at Everton Football club. Tours can also be booked by ringing the ticket office or then can be purchased online at Evertonfc.com.

Me: A derby (pronounced “darby”) is a local rivalry — in this case the two Manchester teams playing each other.

My sense, without really looking into it, is that you won’t get a ticket to that Manchester game for less than $250 each — if you can even find them. If you want to spend that, by all means go for it; it will be an awesome experience. Otherwise, you can probably get a ticket to Everton for more like $60-80 each. Premier League is expensive any way you slice it, but a big game like the Manchester derby is much more so.

Dean: well i will give it a try to get those manchester tickets ….where do i try and purchase them?   failing that i’ll go to the Everton game

Me: Well, I always start with the club website; in this case, on the Man City site there’s not even any mention of tickets! As for their Hospitality packages (VIP treatment, bar, etc.), they are in fact listed at 250 pounds, but I’m not even sure you can get them. See http://tickets.mcfc.co.uk/hospitality.aspx for details.

You might also keep an eye on the official resale site at ViaGogo, where tickets might pop up, but right now they only list the same thing — 249 pounds for hospitality. I’m sure you know, but that would be $750 for the two of you.

Otherwise, you’re into the so-called “secondary market,” which is to say scalpers, and I don’t recommend it. I haven’t done it, and my policy has always been, There’s plenty of games to see and I’d rather deal with the clubs.

And now, here is Dean’s report.

Andrew and I had a wonderful experience right from start to finish. I will include a few pictures. We were surrounded by foul language and intense fans but other than that we really enjoyed Everton and the stadium.

View of the pitch from their seats.

At half time we went out for a beer to discover a massive lineup for beer.  I thought we would wait till they all go back at the start of the second half and miss a bit of the game.  I mentioned this to an usher i was chatting with and he then took Andrew and I to the front of the line where we purchased some food. a beer and a coca-cola.

It really was a wonderful experience for Andrew and I and a pleasant memory. 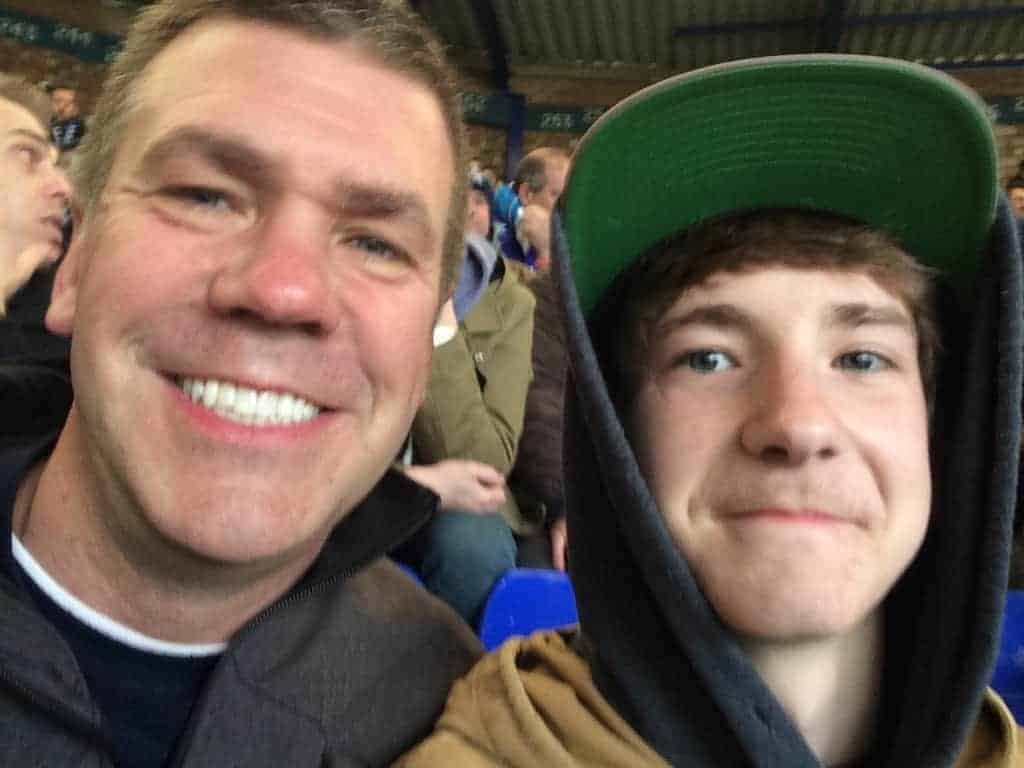 Dean and his son Andrew at Goodison Park.

Would you like to go to Premier League game? We can help! Fill out this form and let us know which clubs and games you’re interested in and we’ll send you a quote.