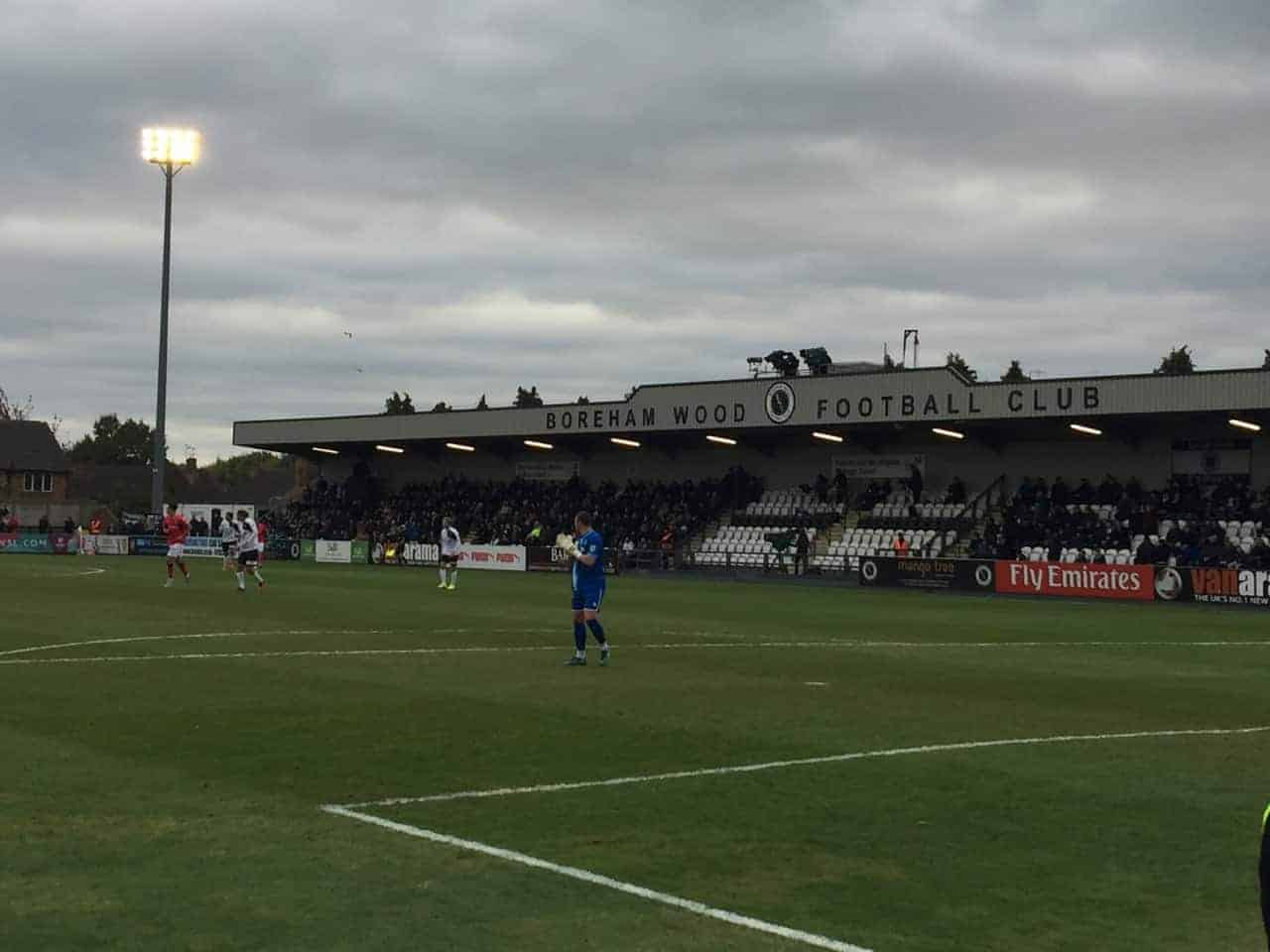 In the FA Cup at Boreham Wood FC

You know you have arrived in the lower reaches of English soccer when you’re on the train and realize you’re following a player to the game, like I did at Boreham Wood. 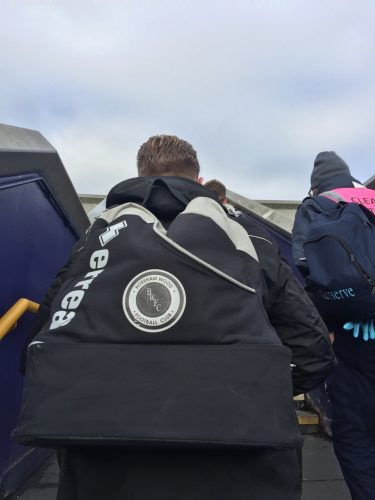 Going to the game? He’s playing in it!

Such was the case when my friend David and I hopped on a ThamesLink from Tulse Hill in South London back in November of 2016 for an FA Cup tie.

Somewhere around Victoria Station, on stepped a young guy with a backpack that said Boreham Wood Football Club. First we thought maybe he was a fan, then slowly the truth dawned on us. And right there we realized we were in for something quite different from my usual travels in the football leagues.

I have often, when explaining all this to my readers, used a baseball analogy (apologies to you non-Americans): Imagine that every team in America is independent, rather than a “farm” team for the majors, and further that these teams can win their way up through the leagues. So Pawtucket wouldn’t belong to the Red Sox; they could either rise to play them in the league or catch them in a Cup.

Well, if the Premier League is the Big Leagues, the Football League is A, AA, and AAA. And the first level beneath that is the National League, a collection of 24 mostly professional teams that most Americans will never have heard of, with stadiums with around 5,000 seats, neighborhood followings, and, well, players that take the train to games.

Boreham Wood, a suburb north of London, is something like England’s Hollywood; Star Wars was filmed there, as were some of the Indiana Jones films and even the original (British) Big Brother. That’s all at a place called Elstree Studios, which is to the left out of the station – which, in turn, has pictures of movie stars in it, as well as stars in the sidewalk outside.

To the right lies a very generic English “high street,” which is Britspeak for a Main Street. I must note one exception, however: the most bizarrely palatial McDonald’s one will ever encounter. 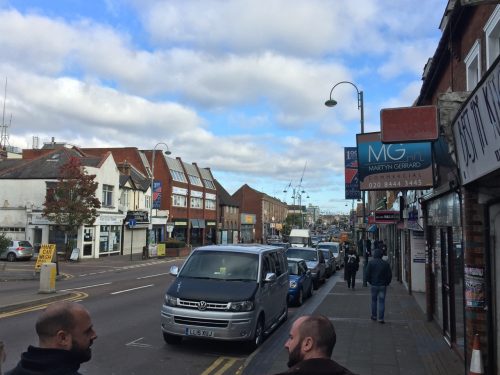 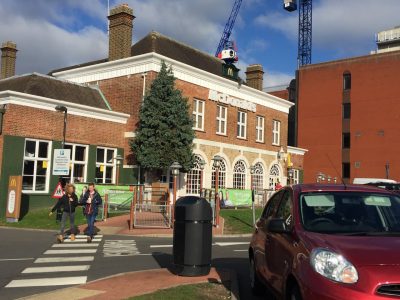 What is the story of this place?

Otherwise, the lineup of shops and pubs was so perfectly ordinary that David, who is 17 and therefore tuned in to the world of burgers the way I am to curries, practically leapt for joy at the sight of a Nando’s. Post-game dinner at this relatively exotic locale was set, and all we needed now was a pub where we could watch the Arsenal-Spurs game.

The fact that Boreham Food FC is also the home of the Arsenal Ladies (as well as the reserve squads for nearby Watford), means it was a pro-Gunners crowd, and my purchase of a lemonade allowed us to camp at a table in the corner and watch the gripping 1-1 encounter at The Emirates. Leaving that game behind and heading down to the Meadow Park Stadium was like turning off the Yankees and strolling down to Mudville. 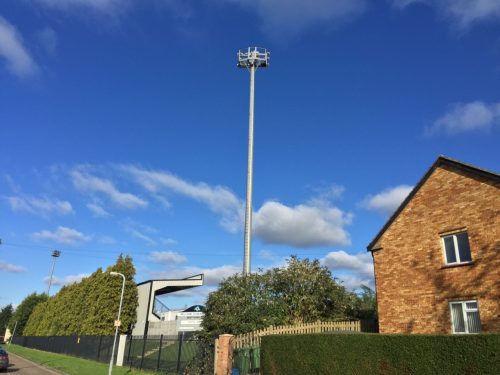 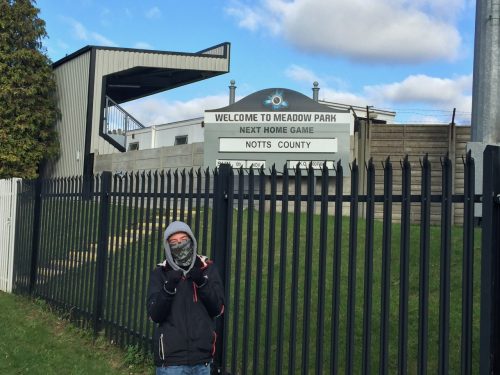 Not that it’s an unpleasant place, the local club. In fact, it’s downright friendly. We said hello to one of the two stewards manning the gate, then watched as a Mercedes pulled in – driven, as I had guessed, by a Board member. In the tiny parking lot (Matchday Parking: £2!) we also saw Jaguars and Bentleys and more Mercedes, so either the Board is large, they pay players more than I would have guessed, or they had some major leaguers on loan. 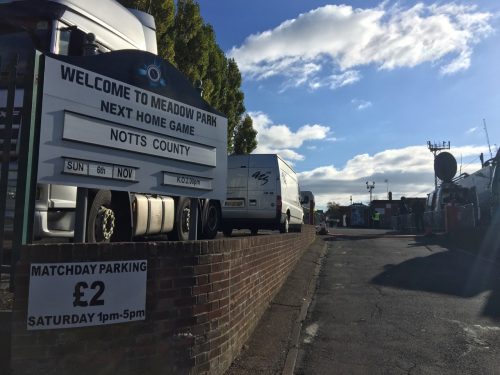 That parking rate is correct, folks!

We went in and got our tickets from the “ticket office,” which was in fact a woman behind a folding table just inside the office door: 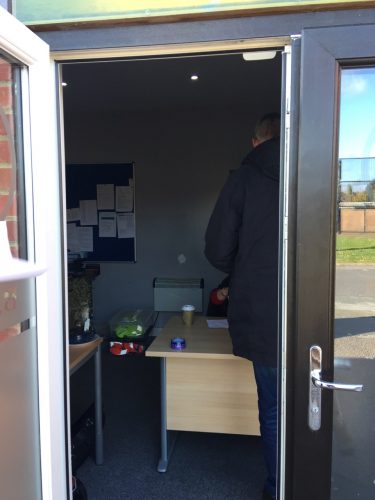 The sprawling ticket office, aka … the office.

While we spoke to her, a man came in, said hello, called her “love,” waved to the other staffer, welcomed us, and popped back out. This, the ticket lady told me, was the club’s manager. Again, welcome to the small leagues. Speaking of which, here’s the entire pile of tickets waiting to be picked up: 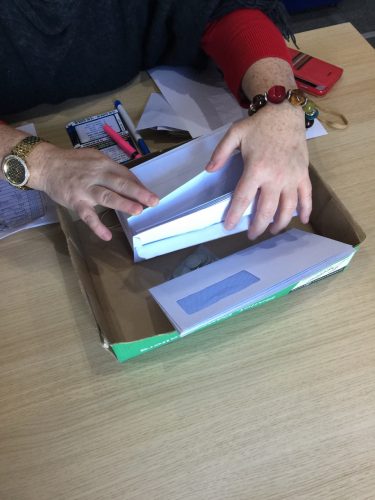 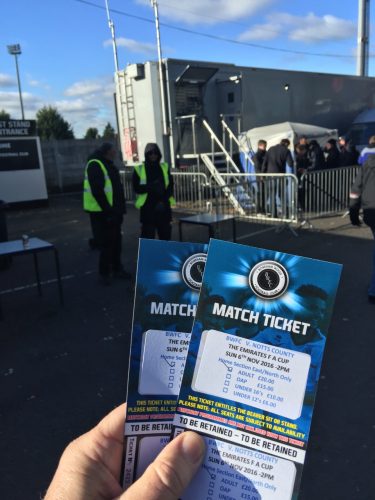 That’s right, they just add a sticker for the current game. 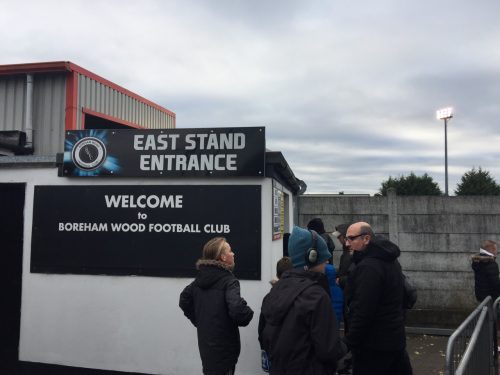 And into the stand we march!

It seemed only fitting we would stand on the terraces, a facet of the lower leagues that was banned from the upper reaches in the early 90s to fight hooliganism and increase general safety. In the seats, even I’m sure at Boreham Wood, the average age is, let’s say, “up there.” In those civilized realms, standing is discouraged and singing is sparse. 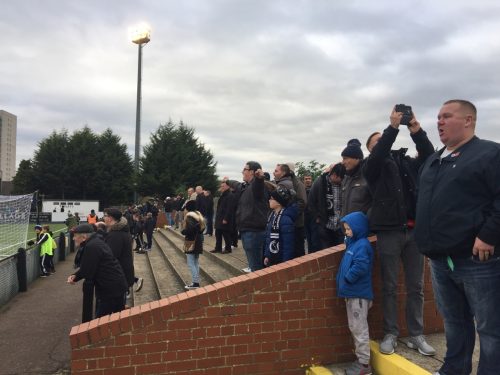 The terraces, though – this is the domain of the Lad. You’ve got your 40-year-olds (and up) reliving the old days and keeping the traditions going; you’ve got your 20-somethings blowing off steam and having a go; and you’ve got your teenagers in training. On the terraces, it’s all about supporting your boys, taunting theirs, making noise and just being a lad.

Now, I have yet to explain why we were here. Why Boreham Wood in the Fifth Tier? Well, it was the first full weekend of November, which means it was the First Round Proper of the FA Cup – the round when Leagues One and Two (levels three and four) enter the competition to face whoever has made it up from below. It’s one of the best times to go groundhopping in England in any season.

Combining my London location with the most appealing matchup of the round brought us to Boreham Wood, who on this day were hosting Notts County, a League Two side from up in Nottingham.

So it was all lined up for a magical day, with one tiny exception: the weather. Remember: England, first weekend of November. It was raining sideways and it was also cold. And the terraces were not covered. So we and the other lads were going to have to jump, sway and sing just to stay warm. And so we did, with some real entertainment coming from the locals.

I wish I could re-create the guttural tones in which we heard, repeatedly, “Come on The Wood!” Or the nearly shrieked “Jesus!” when an opposing header just missed. Or the thrill, for me anyway, of hearing people call out to their players by name – and figure he/they could hear them. In the second half, we had full access to the County keeper, on whose shirt it said Collin. This didn’t stop one lad from yelling, almost as a default in quiet moments, “Collins, you’re shit!” 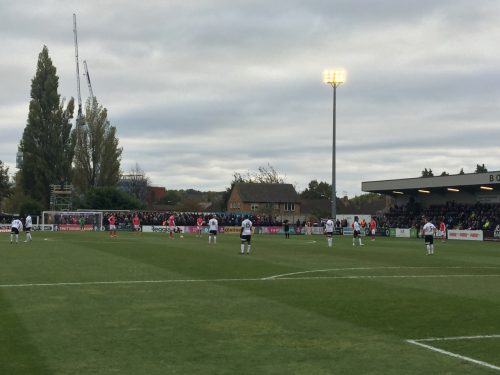 It’s up close and personal at Meadow Park.

And then there was the joy of The Wood getting a goal, which happened at the far end, took us a second to figure out, and then set off a wonderfully, and intentionally, over-done celebration. I caught a tiny bit of it before the cold took out my iPhone. Note the “effort” put in by the stewards to corral the bedlam.

This didn’t compare, though, to their second goal. The critical move was along the end line, not 15 yards from us: a nutmeg from a winger that set off a roar of “go on!” He crossed, the goal went in, and the lads rushed the fence, where they were met by the scorer, a growing pile of teammates, and technically the stewards – who were telling everyone to go back to their seats while also hugging them and sharing in the celebration. It was a special moment, literally right in front of us, and you can see it (as well as me and David, briefly) in the highlights:

Of course, if you’ve watched those, you see that County eventually leveled it up, 2-2. And you can see the shocking Boreham Wood miss that was also right in front of us, where I yelled “It has to be!” just as he lined up to … put it over the bar. You also saw what looked like a winner for County, which their fans celebrated, but which was offside, for which we indulged the fine tradition of mocking their celebrations, with more than a few wanker signs mixed in.

We also enjoyed seeing our fellow train passenger get subbed in around the 70th minute. Turns out he is Conor Clifford from Ireland, like most players on both squads still south of 30. These might not technically be farm teams, but they do have the same mix of up-and-comers, might-get-theres, and on-their-way-outs as you’d find around a diamond in Helena, Montana or Spokane, Washington.

(An update from 2019: According to Wikipedia, Clifford is now back home in Ireland, playing for St. Patrick’s Athletic.)

And then the final whistle blew on a deserved and exciting draw. It means that The Wood gets a replay at Notts County, which could at least get them a nice paycheck.

(Another 2019 update: Notts County won the replay, 2-0, so The Wood were out. In the next year’s Cup they actually beat Blackpool of the Football League, and in 2018 they lost the playoff promotion final at Wembley; had they won, they would now be in the Football League.) 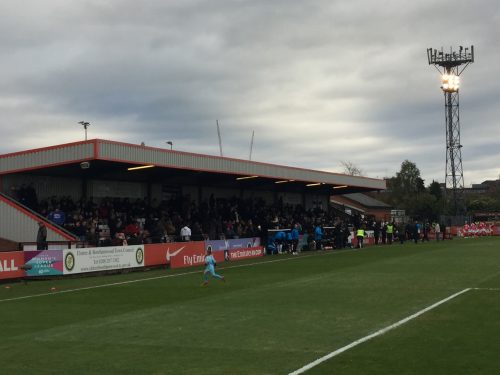 Still, seeing a pro team have to come face the lads on the terraces, and the “minnows” get their replay so far from home, is what they call the Magic of the FA Cup, when even some of the biggest clubs, and their fans, have to recognize and possibly visit these tiny clubs, home of “real football” as many say – places where neighborhood clubs are supported by neighborhood folks, generations still stand together on the terraces in the rain, and you can still call the players by their first name.

As for me and David, we retreated from the weather and made a beeline for that Nando’s, where we confirmed that a burger and fries – excuse me, chips – are a fine remedy for what chills you. And on the way back to South London at the end of the day, we saw Clifford on the train again. We wanted to greet him by name and congratulate him, but before we could work up to it, he had pulled on his headphones and mixed into the crowd on the platform.