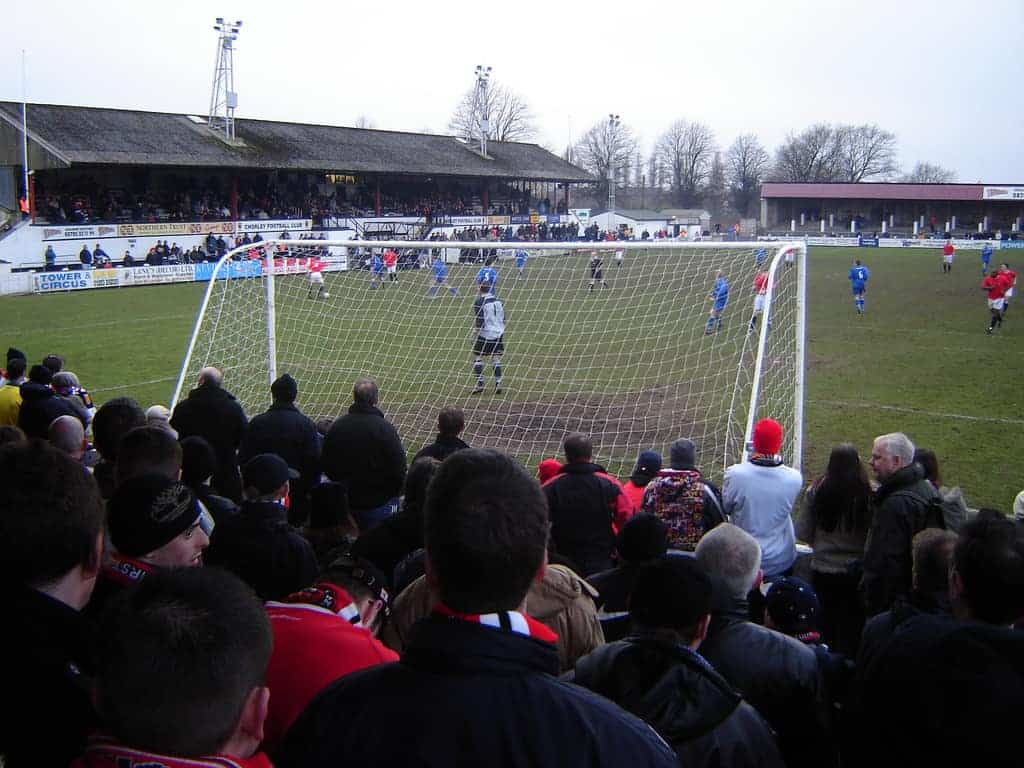 Who is Chorley FC, the Non-League Club Hosting Wolves in the FA Cup?

Let’s get to know Chorley FC, FA Cup “minnows” from the sixth tier of English football. The last non-league club in the 2020-21 FA Cup hosted Wolverhampton Wanderers in their first-ever trip past the FA Cup Second Round.

While I have not been to a game at Chorley FC, I had a great time learning about them as they prepared to host Wolverhampton Wanderers in the FA Cup Fourth Round in 2021. So let me share with you what I’ve learned.

What and Where is Chorley, England?

Chorley is a town in Lancashire with a population of about 35,000. It’s north of the line between Manchester and Liverpool, and like many other northern towns, it made its money in the Industrial Revolution — in their case, with cotton and coal — and now is probably a sleepy little post-industrial place. 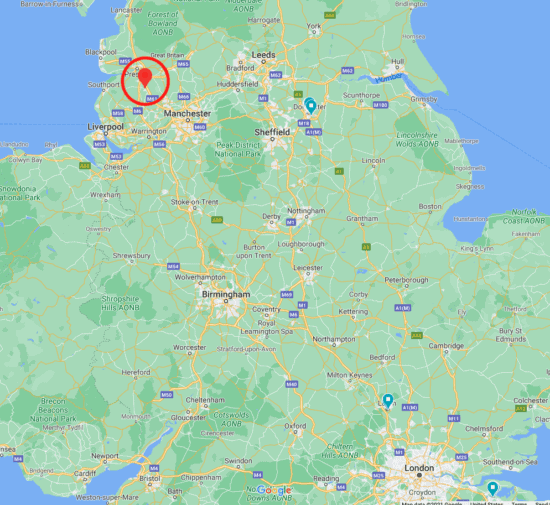 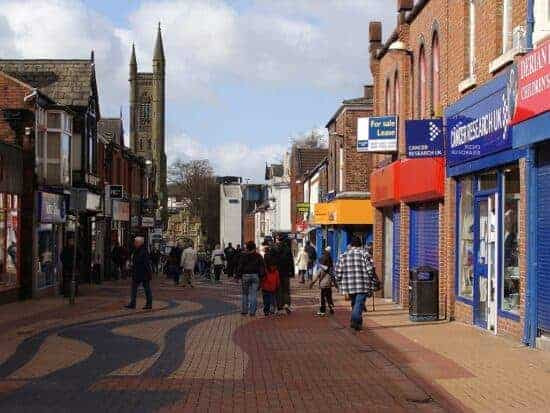 I must also mention the Chorley Cake. It’s a currant-filled pie with unsweetened shortbread, sometimes topped with butter and a side of cheese. This I need to try!

Like many others, Chorley FC was founded (in 1875) as a rugby football club, but switched to association football in 1883. They have never made the Football League, reaching only as high as the fifth tier of the pyramid — first in 1988, when they stayed there two seasons, then again in 2019, lasting only one season before dropping back to the sixth tier and what is called the National League North.

The Chorley FC stadium, their home ground since 1920, is Victory Park. It seats just 4,300 people.

As a sixth-tier side, Chorley started out in the Second Qualifying Round, where they beat Gateshead, 2-1, in early October. Ten days later they took out York City, 1-0, then they caught a break when an odd number of teams left in the competition (because of Covid) meant they won a lottery to go into the First Round Proper.

It’s at that point that Football League clubs come into the FA Cup, and Chorley became giant-killers. They beat Wigan of League One (and the 2013 FA Cup winners) and then Peterborough, also of League One, in the Second Round.

It’s in the Third Round that Premier League and Championship clubs enter the FA Cup, and Chorley caught another break of sorts. 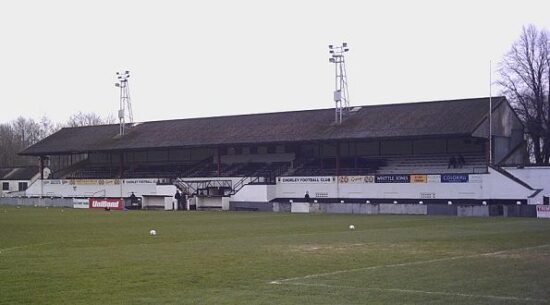 A view of Victory Park. (from Wikipedia)

Chorley’s opponents in the Third Round were Derby County, who won the Cup in 1946, were in the Premier League as recently as 2008, and have been in the Championship since.

But Derby had a massive Covid outbreak that sent a majority of their players and their manager, Wayne Rooney, into isolation. This meant the Rams sent a team of Under-23 and Under-18 players to face Chorley.

Leading up to the game, though, there was concern it would even take place. The pitch was frozen, so the grounds crew laid out covers and heaters the night before. But there were technical problems, and the heaters had to be moved around, so the groundskeeper slept on the pitch!

A word for our groundsman @ben_kay8 – 4am this morning, sleeping for an hour under the tent covering the pitch – this is the epitome of what the #EmiratesFACup means to us 😊

Thank you EVERYONE who helped get today’s game on 👏👏👏👏 pic.twitter.com/RBvbt0EmOO

That tweet was spotted by the head groundskeeper at Wembley Stadium and he promptly sent an invite to the Chorley man to attend the FA Cup Final at Wembley.

Chorley then took full advantage of their luck to knock Derby out of the Cup, 2-0. Look at the snow in the highlights!


Here’s another video that shows a bit more of Victory Park and what it’s like around the club:

Our #FACup third round tie against Derby, captured brilliantly by @Represent1Media.🙌

A local brewery also pitched in by creating a couple of beers for the occasion.

Their post-game celebrations, which may well have involved a few of those beers, quickly went viral, and attracted the attention of a certain famous singer who only tweets about once a year:

And so it was on to the FA Cup Fourth Round Draw, in which Chorley came out first, thus at home, against… Wolverhampton Wanderers of the Premier League!

Chorley FC vs Wolves in the FA Cup Fourth Round

Chorley FC, of course, were beside themselves, even with the frustration of not being able to have fans in attendance. But, following the highly publicized example of Marine FC when they hosted Tottenham, they sold virtual tickets for £10, in an attempt to “break” their all-time attendance record of 9,679.

Consider those numbers against these: The website transfermarkt.co.uk estimates the transfer value of Chorley FC’s players at a total of £405,000. One of them works as a PE teacher in nearby Barrow. They sold the back of their shirts to a tabloid called the Daily Star just for this game, trying to raise all the money they can.

For Wolves, whose stadium seats 32,000 and sells out every week in non-Covid times, that player value figure is £380 million.

If you’re wondering, since World War II only nine non-league clubs have made the Fifth Round, most recently in 2017 when Lincoln City (now up in League One) and Sutton United did it.

You can follow all the excitement on the club’s Twitter feed or the hashtags #FlyMagpiesFly and #ChorleyFC.

The funny thing is, for a small number of British fans of a certain age, Chorley v Wolves has some real historical significance. For we have, in fact, done this before.

Flash back to the 1986-87 season, when Wolves were in a very dark place, having suffered three straight relegations to drop to the Fourth Division, their lowest point ever on the pyramid. Chorley, meanwhile, were in the sixth tier but in a good stretch. And they were drawn, then as now, in the FA Cup at Chorley.

The first game was 1-1 at Victory Park, and the replay at Wolves was also 1-1. I actually found this video from the replay on YouTube:

This led to a second replay, moved to Bolton Wanderers, where Chorley shocked the world by whipping Wolves, 3-0.


The description on that video, written by a Wolves fan I presume, says it all: ““No matter how shit it gets, it can’t get worse than this. Shit team losing to another shit team in a shithole of a ground.”

The BBC has an excellent piece on this game, entitled The night Chorley’s £25-a-week players embarrassed Wolves. Each player earned themselves a £120 bonus for it!

Could we neutrals dare to dream that Chorley FC, the last non-league club standing in the 2020-21 FA Cup, would repeat this glorious bit of history?

Here are the highlights:

Cheltenham, a town at the foot of the Cotswolds, saw their League Two side host mighty Manchester City at 7,000-seat Whaddon Road. Groundhopper Guides has a post introducing you to Cheltenham Town.

They had a “drab” 0-0 in the league, but this incarnation of England’s biggest football rivalry was much more entertaining.

Crawley Town, who took out Leeds in the Third Round, hoped that Bournemouth would play a weakened side to prioritize promotion back to the Premier League.

Wycombe, a club just west of London who were enjoying their first-ever season in the second tier, drew Tottenham, who were on something of a tour of smaller grounds. In the Third Round, they beat eight-tier Marine FC in the largest gap in the competition’s 150-year history.