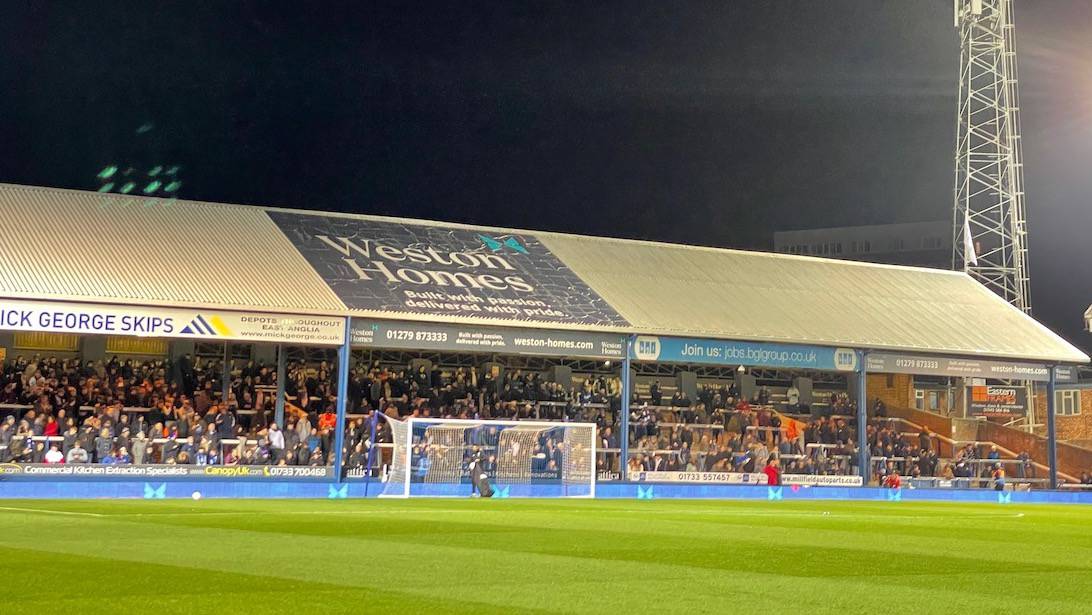 Seeing a game at Peterborough United is, for the groundhopper, a great combination of history, atmosphere, quality and – if one is traveling from London – convenience.

Known as “The Posh,” which we will explain in a moment, Peterborough as club and town are anything but – which is why we think it’s a great place to see a game. They are in the Championship for the 2021-22 season, which feels pretty ambitious for a club their size, and their London Road home offers a nice mix of old school character and modern comforts. Take a break from the Premier League drama and take the train to Peterborough for the day.

A relative newcomer to English football, the club was formed in 1934 by selling ownership shares, and they drew more than 4,000 people to their first game. They were already known as The Posh, because the chairman of the town’s previous club had said he wanted them to be a “posh club” with “posh players.” They went bankrupt, so in classic English style the new club simply kept the nickname, no doubt with a self-effacing wink.

Victoria “Posh Spice” Beckham actually sued them over the name, a case which she lost and for which, I sincerely hope, she feels ashamed.

The (real) Posh were in the Football League by 1960 but spent their first three decades there in the third and four tiers. 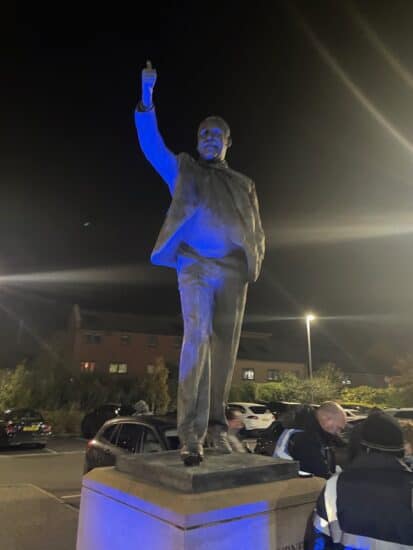 Enter the hero, a former player named Chris Turner who took over as manager in 1991 and promptly went unbeaten in his first 13 games, then achieved promotion back to the third tier –now called League One. The next year they went on deep runs in both the League and FA Cups – beating Liverpool at home in the former – and won a playoff final in their first-ever trip to Wembley, earning them a spot in the second tier for the first time.

After Turner retired and eventually got his statue, the club went back to the third tier, briefly popped into the Championship in the early 2000s, and made it back there in 2021 by finishing second in League One.

So if you visit Peterborough in the Championship, keep in mind you’re seeing a team pretty much at the peak of their success in terms of league placement. 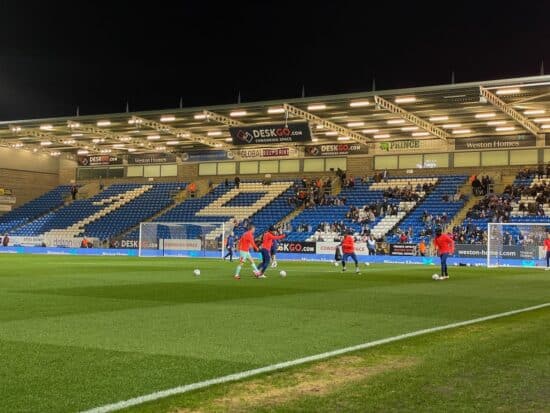 One of the newer stands at London Road.

The Posh have played at London Road, just across the River Nene from the city center, since their founding. Today it’s a 15,000-seater whose stands mainly date from the 1990s, although the London Road terraces in one end and the Main Stand go back to the 1950s but had work done in the 90s.

The result is that three stands look old (in a good way) but are still somewhat modern and comfortable. The stand behind the goal opposite the London Road stand looks all shiny and new compared to the others.

Inside the Main Stand is something I have not seen at any ground, before or since: A series of wall paintings of every kit in the club’s history! It was all done by fans named Nick Warrick and Dave Allen, and it’s both quite an achievement and something other clubs should emulate. That and a (not in use at the time) children’s play area gave the place a lovely community feeling.

Given a choice, I would sit in the main stand to enjoy a view of the away fans opposite (and the art!), or go for the London Road if you want to stand and sing with the rowdy folk.

As of this writing, it’s known as Weston Homes Stadium as part of a sponsorship deal. 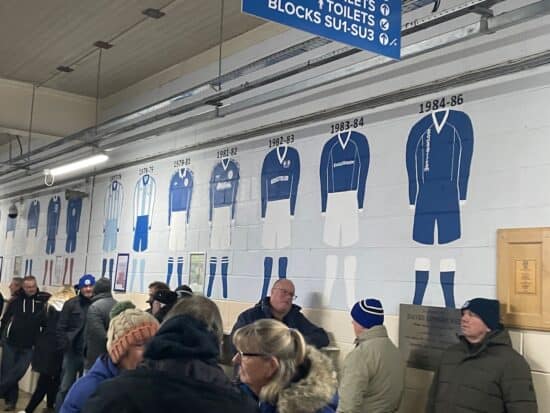 A fan’s history of Posh shirts.

The ground is less than a mile from Peterborough Station, so walking it is just fine. This can bring you by the cathedral (see below) and also by the Charters Bar, housed in a barge on the Nene but also sporting a massive riverside seating area.

Other pubs near the ground are the Peacock and the Coalheavers Arms, which also sports a beer garden.

Otherwise, the walk from the station will bring you past loads of eating options and nice pubs, and there’s also a bar at the ground. Of particular note in town are the Brewery Tap and the Wortley Almshouses. 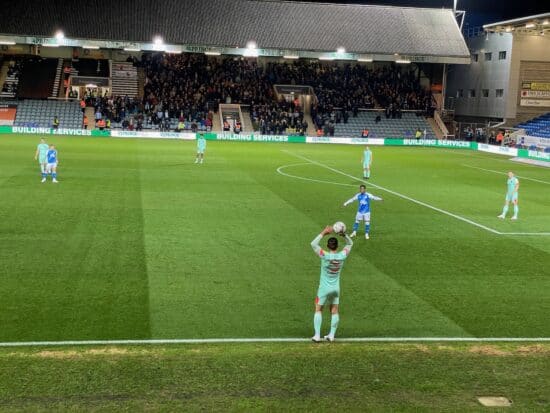 I can’t imagine The Posh ever sell out, unless they draw a big club in a cup or, perhaps, if they are on a good run and play their main rivals, Cambridge, Northampton Town or MK Dons.

Otherwise, you can pretty much walk up and get a seat for less than £30.

The primary thing Peterborough is known for is its cathedral, built mainly in the 12th century and said to be the best-preserved building in all of England. It’s about a 10-minute walk from the station, and available tours include an option to go up the tower.

All of this is less than an hour from London Kings Cross, so making a day trip to Peterborough to see the cathedral and some football is as easy as can be. 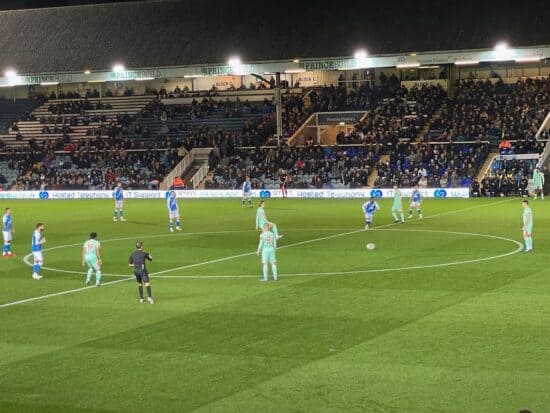 Kickoff of Posh vs Huddersfield.

In every trip, especially a long one, there are difficult days. My time in Peterborough was one of those, though it’s no fault of the city. I chose poorly on the hotel, the weather was crappy, and I was tired of being on the road. Also, I’ll just say: If you’re in for an evening game, eat beforehand.

But I had a goal to “finish” the Championship on my quest to “do the 92,” plus I was curious to check in with Huddersfield Town, whom I had seen twice before during their heady days of reaching, and then surviving, a season in the Premier League.

Aside from liking the ground and enjoying the Charters down by the river, the first thing I noticed was the rabbit. See, they are Peterborough, and Peter Rabbit might live in a burrow, hence the mascot running around is a rabbit named Peter. And he carries a very large carrot, which makes perfect sense from a culinary perspective, but when he swings it around, never is seen without it, and – especially – when he holds it up in defiance toward the away fans, it is hard for some (ahem) to not make (private) phallus-based jokes. 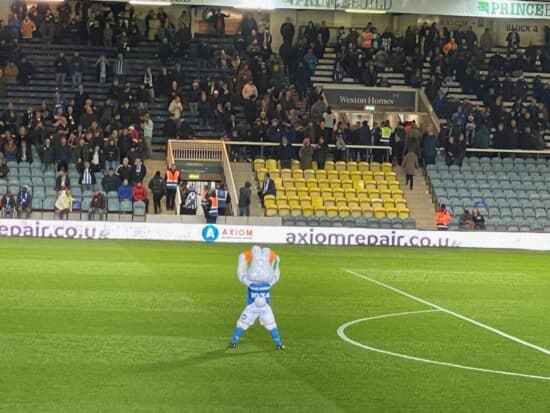 Yes, Peter, we’re all impressed by your carrot.

I did do well to catch Huddersfield’s goal in a video, plus their celebration. Can’t make out what they’re saying at the end, though.

Otherwise, I recall enjoying myself, chatting with people, feeling a bit cold, and two goals in the last 20 minutes that resulted in a 1-1 draw. And I recall the London Road End made significant noise, especially with their rolling version of “When the Posh Goes Marching In.” Pretty good atmosphere from both sets of fans for a chilly Tuesday in November.

All in all, I really do recommend Peterborough as a day out, especially if you’re a London-based groundhopper and want to get out of the city for some Championship-level football in a nice older ground. And a cathedral, if you’re into such things. And a rabbit with a big carrot he seems mighty proud of.

And now I should hit the road again!

Are you looking to see an English football game? Groundhopper Guides can help. Fill out this form, and we’ll get back to you shortly.