A father made his son’s dreams come true with a London groundhopping trip over the Christmas holidays. They saw three Premier League games while enjoying Groundhopper Guides’ tickets and hospitality. This is their experience.

This Reader Report was written by Terry Phipps. It has been edited for clarity. All photos are courtesy of the Phipps family.

My boy Will has been a Chelsea fan from about four years old. He has played football since shortly after learning to walk and decided to support Chelsea as they were the closest Premier League outfit to where he was born. We all moved to the States in 2005 and, as such, he has been a remote fan all his life. We managed a visit to Stamford Bridge during one offseason and the stadium tour was very much enjoyed, and as he grew up we travelled to watch Chelsea at International Champions Cup games, seeing them play Real Madrid at Michigan, PSG at North Carolina and Inter Milan at Minneapolis. He got these signed gloves from Thibaut Courtois after we found out which hotel the Chelsea team were staying at! 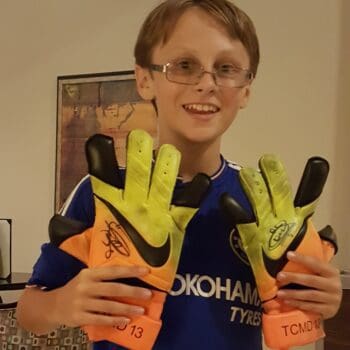 Young Will with his Chelsea goalkeeper gloves.

We watch the games intently on NBC, and even went to the fan fest in Austin a couple of years ago. We are Houston Dynamo season ticket holders so Will certainly has grown up watching a lot of the game. At 17 though, he had never attended a live Premier League game.

I remember the moment in September that I had the idea to check who was playing in London over Christmas. Were Chelsea playing at home? Oh wow, a New Years fixture at Stamford Bridge against Liverpool was on the cards. So the first issue, how do I get permission from my wife for this? Will’s 18th birthday is on January 14, so that was close enough to justify this trip. And he was due back at school on January 5, so we thought we could make this work! 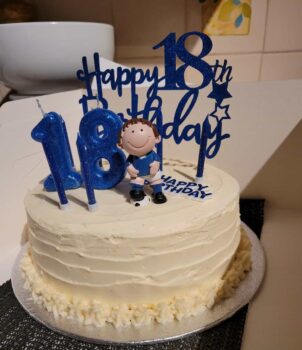 Then the dilemma was how to get tickets. I didn’t want to trust a tout. It’s a long way to travel to be turned away at the gate. I turned to Google and did some research, looking for travel agencies that could make the arrangements for ticketing on my behalf. In time, I found the link for Groundhopper Soccer Guides.

Reading the material, it was clear that Paul knew how the game worked and I felt comfortable in going forward in discussing a ticket purchase. I decided we’d go to the Chelsea vs Liverpool game and make a weekend of it by going to the Crystal Palace vs West Ham game the day before. Then, in studying the fixture list further, I realized I could fit in the Chelsea vs Brighton game if we flew out on Christmas day, so we bought tickets for that as well!

And then Omicron hit!

I had the tickets and the flights sorted, but as we approached the holidays, the situation was not looking good. Scotland and Wales closed the stadiums to fans as cases started to rise again. Still, we decided to go for it. I won’t forget Will’s face when we handed him the tickets for the Chelsea game on Christmas morning. We’d be on the plane only hours later.

For our Day 2 Covid testing we used Express Test at Heathrow Terminal 2 arrivals. I recommend them, as they got us results in the time promised (by 10pm the following day), though it meant we needed to quarantine until we got confirmation that we both tested negative. Then it was a case of fingers crossed and hoping the games went ahead as planned. 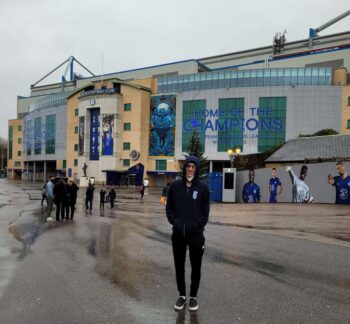 Will Phipps at Stamford Bridge at his first Premier League game.

We took the train to town from Kent and took the Tube to Fulham Broadway and made our way to the ground. For this game we were joined by my mom and her partner Barry.

We’d booked to stay the night at the Millennium & Copthorne hotel as this was an evening kick off (they served a great breakfast the next day by the way). We did the stadium tour beforehand, viewing it from all sides and seeing the changing room, press room and player tunnel before entering the museum. This package was excellent, and the guides were wonderfully attentive. We had a great chat with Ron ‘Chopper’ Harris and then made our way to the seats in the West Stand Upper. 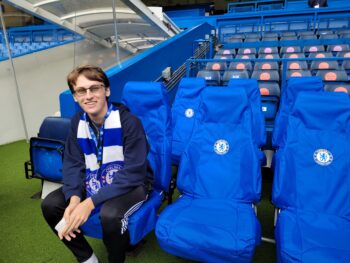 Will in the players’ seats during the Chelsea stadium tour.

I had verified that the CDC white vaccine card was accepted as a Covid pass before the game, and it was, but this was certainly on my mind as we approached the gate. No problem though; we were allowed straight in. Do note that this was carefully checked at all the games I attended. 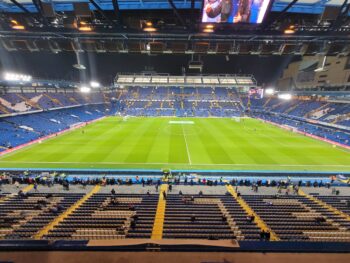 The West Stand Upper seats have a great view over the ground. Brighton had a decent following come up from the South coast and really made themselves heard. Chelsea made a good start and pressure told after 27 minutes when Lukaku headed them in front.

They didn’t capitalize on it though, Brighton were very much in this game all the way through, as in stoppage time Danny Welbeck buried a world class header for the equalizer. That sinking feeling when the away supporters are celebrating! Still my boy enjoyed his day, and got to see his first competitive Chelsea game. Despite the odds, it had all come together!

View of the pitch from a Whitehorse Lane Executive Box.

We used the Hilton hotel in Croydon as our base for the next couple of matches. By the way a good shout if you want to avoid driving in London as the town is outside the congestion charge zone so you can drive to hotel and it has excellent links into London by train and tram.

Selhurst Park is a traditional football stadium in the heart of the community. It is a proper ground, with all seating close to the pitch. Our tickets included the Legends package, where after a first class multi-course meal, a Palace legend talked about the game. On this day it was John Salako giving us his insights into how the game would proceed (he also summed up at the end of the match) and did so eloquently. This was my first trip to Palace, and the atmosphere generated was second to none. West Ham fans were outstanding, in my view the most entertaining we saw during the trip. Constant, continuous singing throughout the game. The executive boxes at Palace are somewhat unusual being along one of the end lines in the Whitehorse Lane Stand. These seats were right adjacent to the away fans. 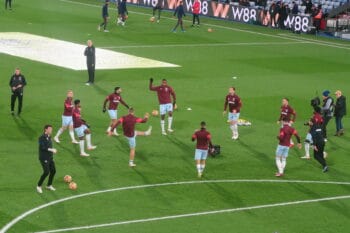 Crystal Palace players warming up before the game.

And what a game it was! Palace hit the post (Schlupp) within 45 seconds of the game starting and were certainly on top at the beginning. Then from nowhere West Ham were in front. Benrahma fed a diagonal ball to Antonio who got in front of the defender to poke it in, and then minutes later Lanzini crafted a magnificent goal with wondrous control, right foot, left foot, left foot into the top right hand corner. Palace hit the crossbar (Edouard) then Benteke had a couple of great chances stopped. At the end of the half West Ham got a penalty due to handball. Needed VAR to call it. Penalty tucked away by Lanzini. At the half, somehow West Ham were leading by three goals in a really close game.

The second half started more quietly but after 82 minutes Edouard made the game interesting and Olise got a second at 90 minutes making West Ham sweat during injury time. After the game, it was back inside the suite for drinks and pies! 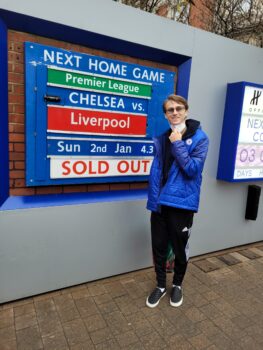 Will at his third Premier League game.

The next day we got the train from Croydon to London Bridge and used the underground to get to Stamford Bridge. On the way, we did the tourist thing visiting the Shard, then to Westminster to see Big Ben and the London Eye, before getting on the District Line to Fulham Broadway.

The atmosphere was great heading to the ground, no sign of any trouble that I saw. We entered the Copthorne hotel for the Canoville dining package. Again the careful Covid paperwork examination, before entry to the lounge. This was a much larger area than the other packages we’d experienced with a good selection of food beforehand, though alcoholic beverages were extra to the package price. I enjoyed a starter of continental meats and smoked salmon, then a Sunday lunch of beef and pork with all the trimmings. 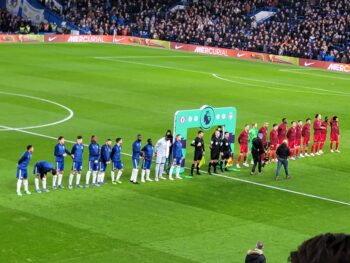 Chelsea and Liverpool players line up before the game.

Our seats were in the East stand adjacent to the Liverpool supporters. They were in good voice. These seats are closer to the pitch than those we had in the Brighton game and gave a great view of the game.

All the goals came in the first half and Liverpool got off to much the better start. Mane scored after 8 minutes when arguably he was lucky to still be on the pitch after a stray elbow hit Azpilicueta in the face. Then Mo Salah made it 2-0 by finding the goal at the near post past Mendy. At this point I’m studying my son’s disappointment and thinking it’s a long journey back to Houston. Then at 41 minutes the game is getting interesting again when Kovacic hits a worldie volley with his right pin in off the post and Pulisic takes a great ball from Kante and buries it. Cue bouncing up and down in front of Liverpool’s dejected support.

In the second half Mendy made great saves from Salah and Mane to keep Chelsea in the game before Pulisic shinned an effort to the keeper. In the end, honors were even in a great result for league-leading Manchester City.

I very much recommend Groundhopper Guides for arranging a football package for you. They are very organized and respond quickly to any questions even if out of usual office hours. I am already looking forward to my next trip.

Thanks to Terry for sharing his groundhopping experience, and Happy Birthday, Will!

Are you looking to see a Chelsea or Crystal Palace home game? Fill out this form, and we’ll get back to you shortly.