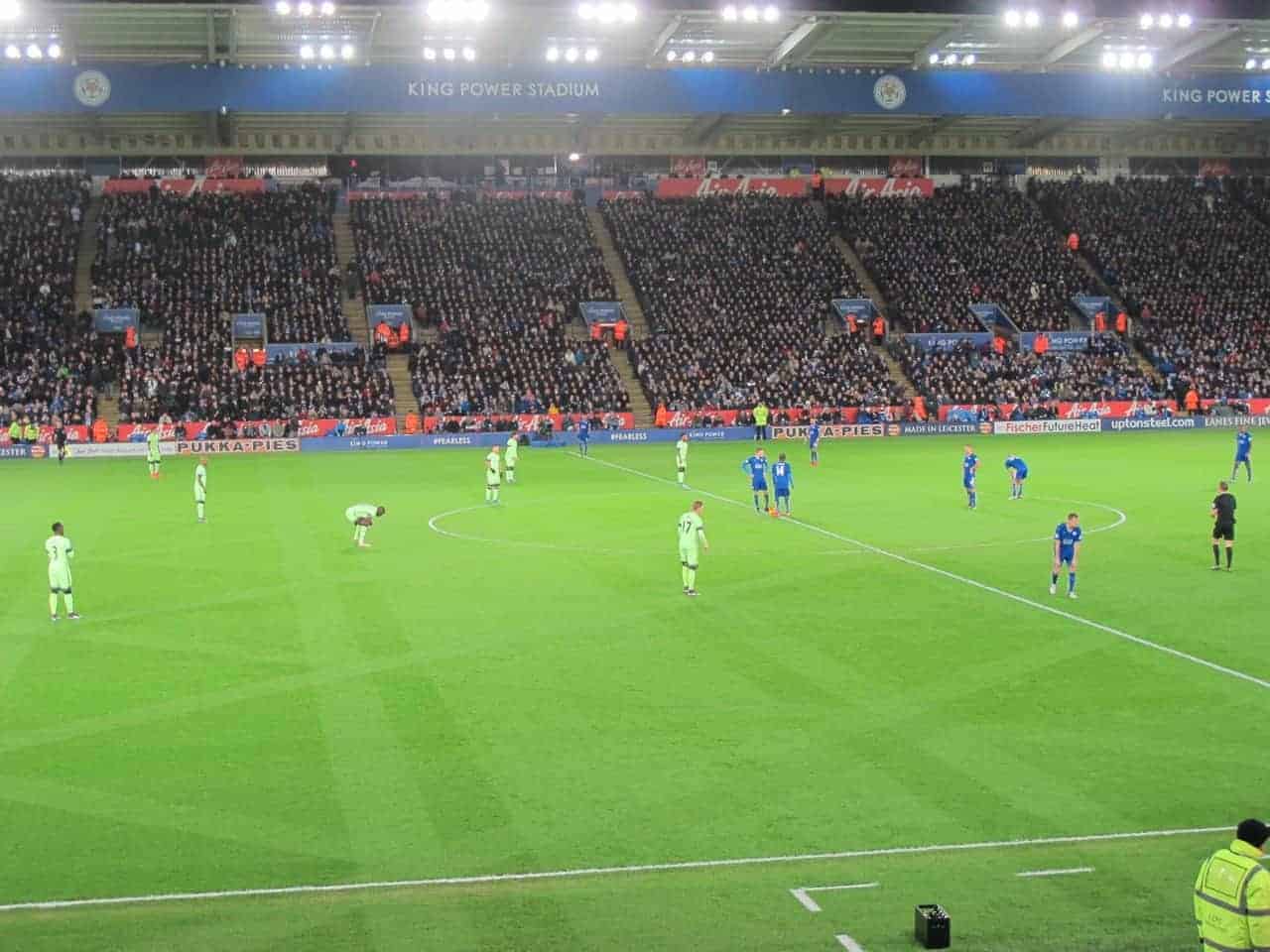 (Writer’s note: This was written in January 2016, and I have decided to leave it as is.)

Seeing a game at Leicester City these days is almost a spiritual experience. 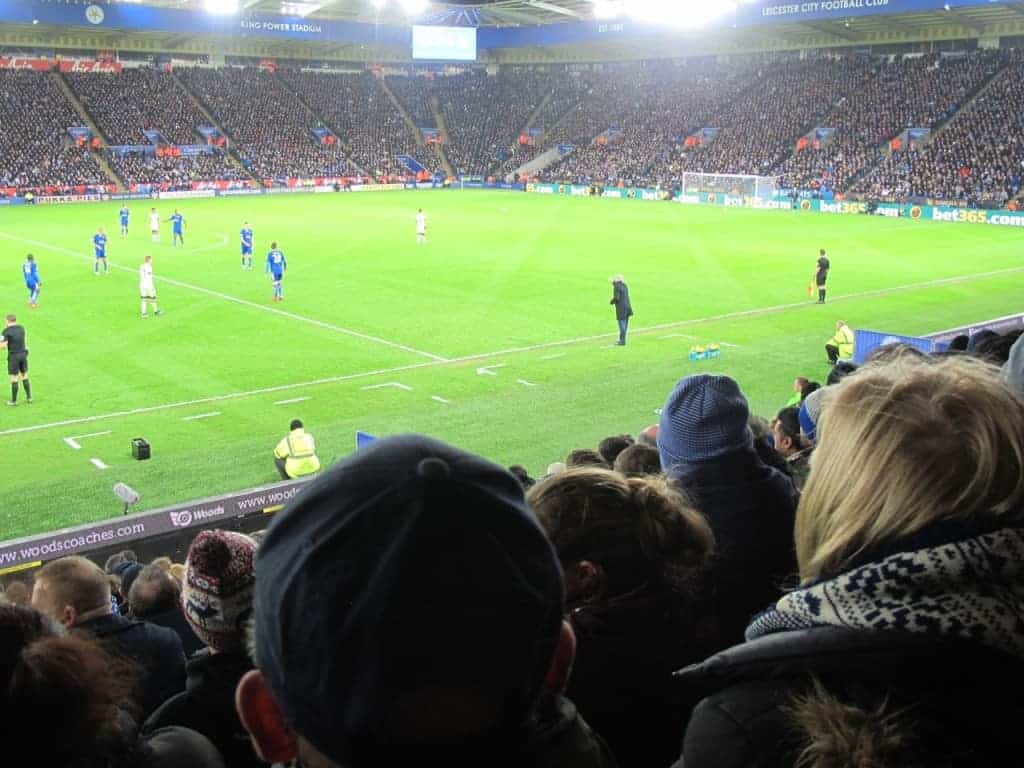 Have you ever been to a game where your team was getting crushed, all seemed hopeless, and somehow they started coming back to life? And then they got back into the game, and then momentum kicked in, it seemed everything they did was right, and they were just rolling? It’s a sense of shock, wonder, and joy.

That feeling of winning, of irresistible energy, and everyone exactly in the same place – that’s probably what it felt like to be a Leicester City fan in 2015. When the year started, they were rock bottom of the Premier League, and they seemed certain to go back down to the Championship. 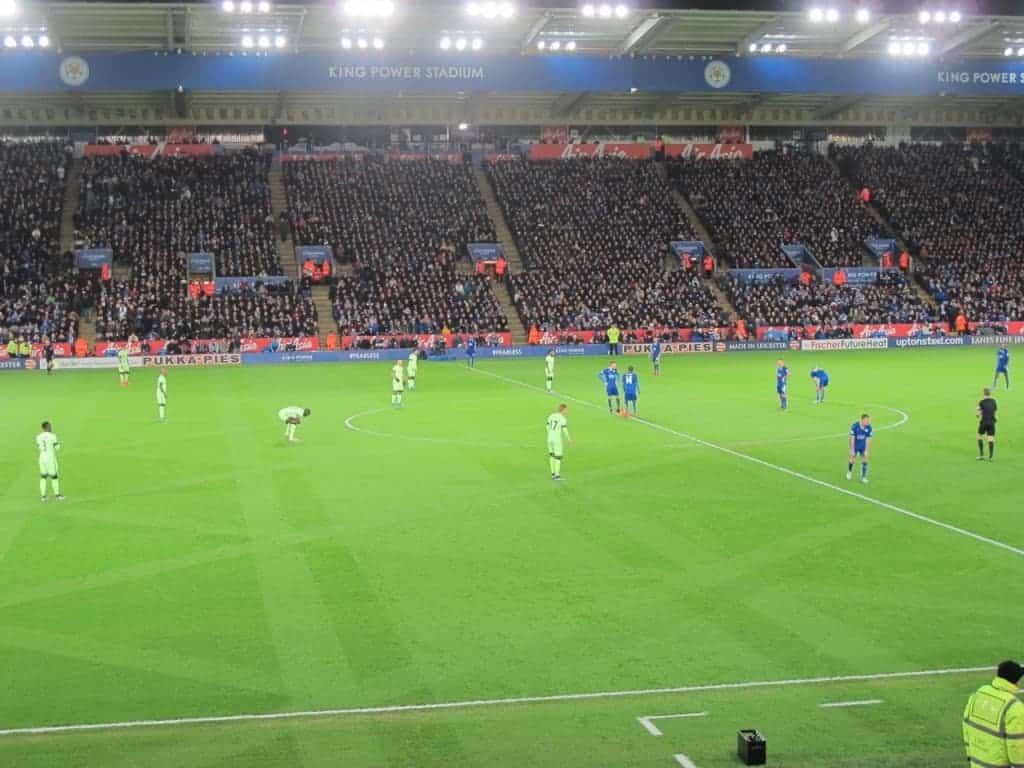 But then they started winning, game after game, in all sorts of ways, and they stayed up. When the new season began in August, they had a new manager – and they kept winning! Their main man up front scored in 11 straight games, a Premier League record, and when he got the 11th, against Manchester United in Leicester’s home stadium, they were top of the league.

When I arrived in late December, they were still first, and they were without doubt the story of 2015. And yet, they had just lost 1-0 at Liverpool. And now the behemoths of Manchester City were in town. And, being English, their fans couldn’t quite seem to get too excited about all of this. Even in the midst of pure success, English people will shrug and smile and admit that, well, yes, it has been really something, hasn’t it? Behind that is this sense that it could all fall apart any day – and maybe it has already. After all, not scoring at Liverpool … that’s not how it’s been. And City are awfully good …

But sitting in King Power Stadium that evening, I could feel the energy, just below the surface. It’s tied directly to how the team plays, too. They wait and wait and wait, then they press, and you make a mistake, and BANG. The crowd knows it’s coming, too, and whenever they get the ball in midfield, the roar of “go on!” is visceral. Leicester and their fans are like a snake, coiled, and ready to strike at any time.

I took this (admittedly poor) video of a Man City corner kick to give you some idea of what it’s like. This breakaway ended in a foul, and the cry from the crowd is the usual reaction to a foul plus this sense of “How dare you crush our magnificence with your crudeness?”

The questions coming in were, How would Leicester respond, and Which Man City will show up? Would Leicester fold under expectations? Would City live up to their awesome talent? Or would City wilt, Leicester get rolling, and the crowd consume the visitors alive?

Well, as is often the case in football, none of that really happened. The coiled snake and the great bull started each other down for 90 minutes, and while it ended 0-0, it was anything in the world but boring. It was tense, it was dramatic, at times it was nasty. It was #1 against #3 in the country, and the crowd was right in tune with it.

And when it was over, something like normalcy kicked in around me. The guy on my right, who’d spent the whole game texting and occasionally calling the referee “stupid,” left a minute or two early to beat the crowds, wishing everyone a happy new year as he went. The guy on my left took his grandson’s picture, and off they went. The sweet ladies behind me figured they were still second on goal difference, and “Really, that’s something, if you think about where we were a year ago.” And then they tottered off. Across the way, some home and away fans shared some banter across a line of stewards. 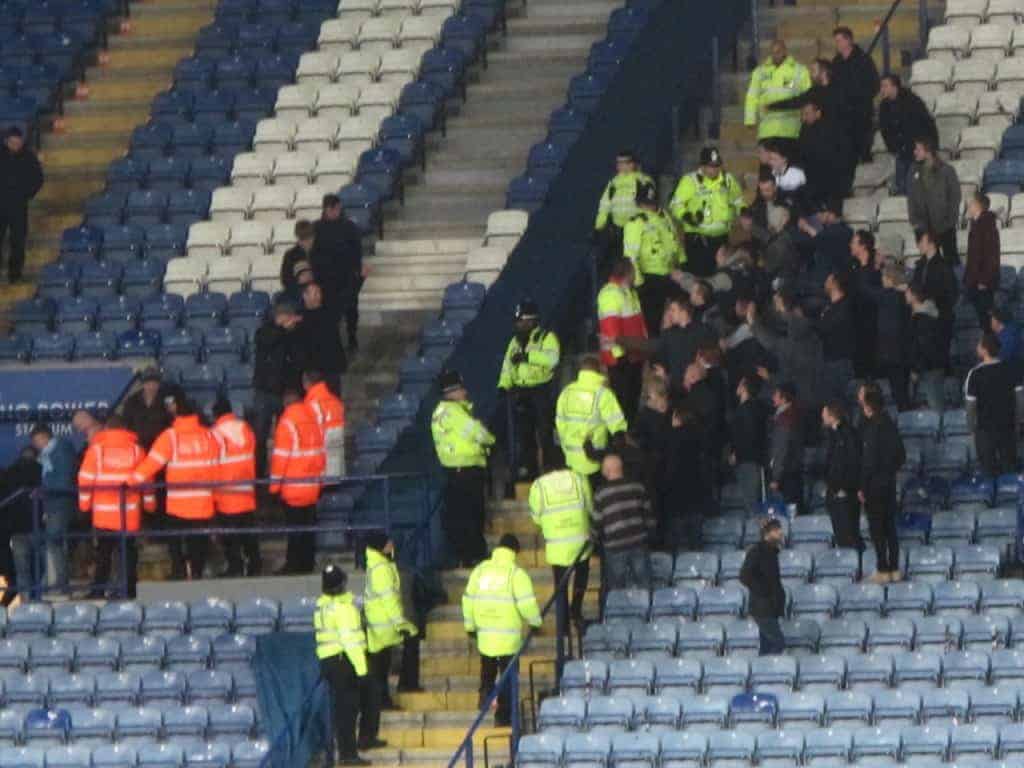 Having a go, post-match.

And I … well, I took my usual shots of the ground after most people had left … 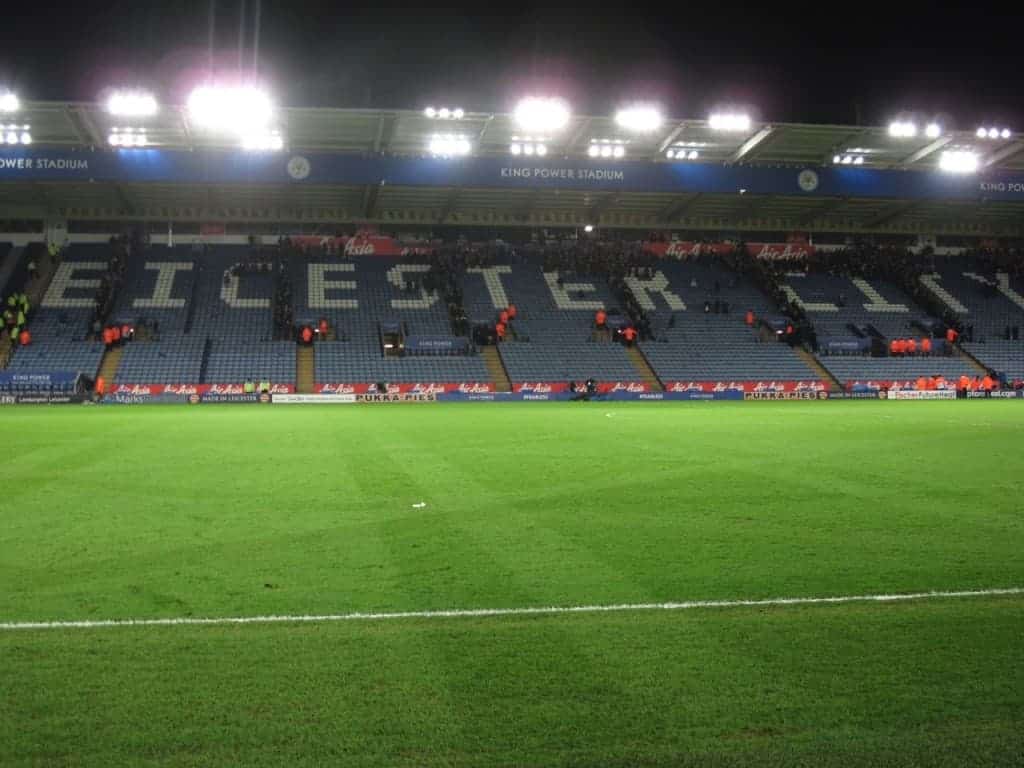 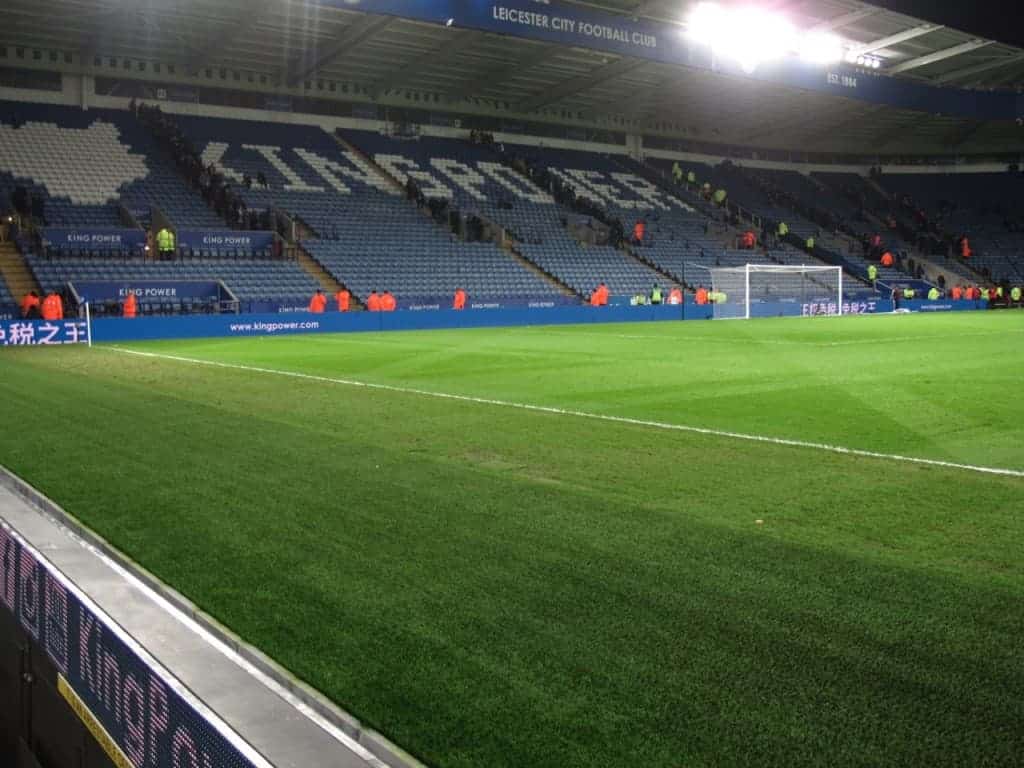 And then I walked across the lot to my Holiday Inn – that was pretty sweet, actually, 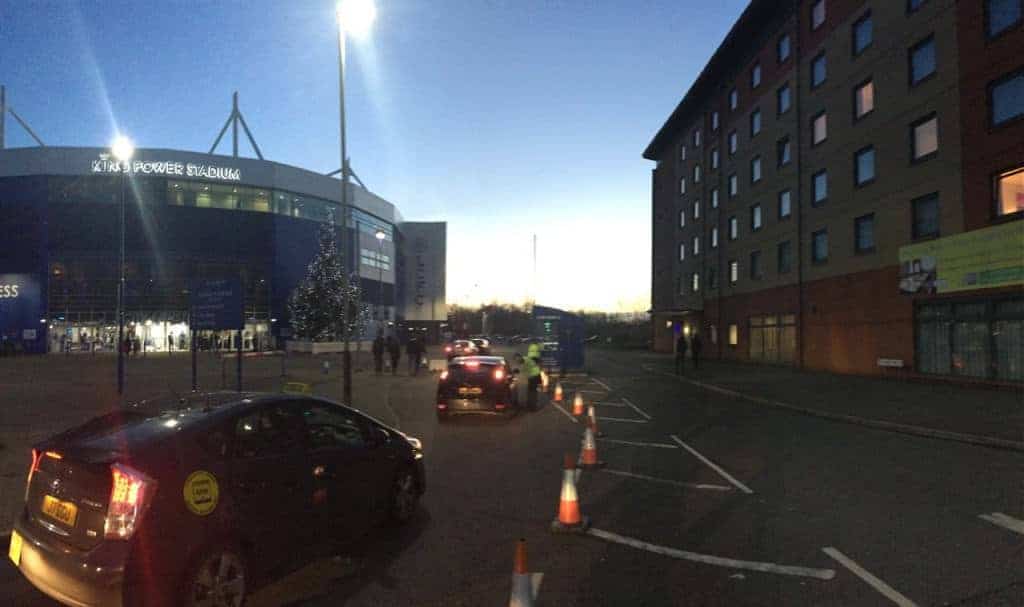 Stadium on the left, hotel on the right. Sweet!

And in the bar, I watched the TV pundits say Leicester had “responded well” to the Liverpool loss, but in the big picture they’ve probably peaked. Man City, they said, would get better. So would Liverpool, and Man United, and Arsenal. Order will return, is what they seemed to be saying. The folks in the bar booed, but it was more of an “Aw, come on, give us a chance” kind of booing.

And maybe the snake will crawl back into its hole, never to truly strike. Maybe Leicester won’t even make Europe, and football will go back to being #2 in town to rugby. Maybe the hot young players will head off to bigger clubs, then come back here and beat their former team. These things happen, after all. In this league, money swamps all storms.

But I felt it, and it was real. I absolutely loved it.

Postscript: As is now well known, Leicester went on to win the title in 2016, one of the great sports stories of modern times.