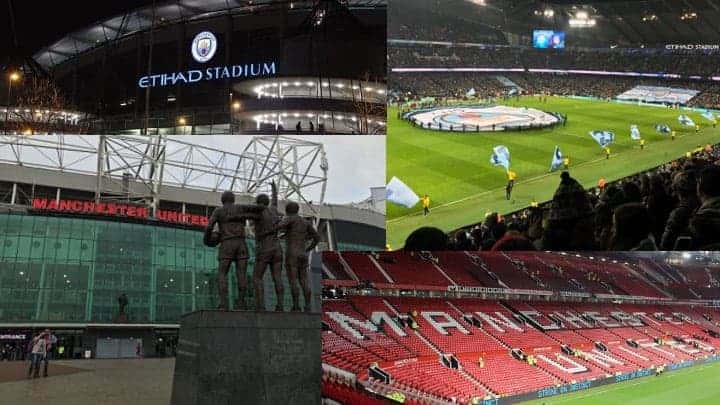 Getting to Know the Manchester Derby

The Manchester Derby, Man City vs Man United, has become one of the most high-profile derbies in English football.

But it hasn’t always been that way, and as great as Manchester City are these days, it’s only recently that they established any kind of parity with Manchester United.

Meanwhile, the red half of Manchester doesn’t even seem to consider the blue half to be their biggest rivals; Man U’s main hatred is reserved for Liverpool in the North West Derby.

City’s fans point out that United’s home, Old Trafford, isn’t even technically in Manchester, while United fans mock City’s Etihad ground as the “Emptyhad.” Both accuse each other’s fanbases of being recent “plastic” additions, while the rest of the country probably sees little difference between the two anymore.

Still, this local affair of Man Utd vs Man City has all the trappings of a great rivalry, from terrific games to manager spats and legendary goals. So let’s take a look at the history, and some of the top moments, of the Manchester Derby.

We’ll start, as always, with a brief history of each club, adapted from our guidebook, The Groundhopper Guide to Soccer in England. 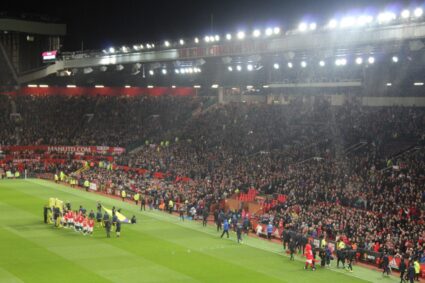 United was founded in 1878 as Newton Heath FC, changed their name to the current one in 1902, won the league twice and FA Cup once by 1909 … and then disappeared from trophy contention. They almost went bankrupt in 1931.

But in 1945 they hired a manager named Matt Busby and embarked on a great period of success. They won three league titles in the ’50s but that team, known for its youth as “the Busby Babes,” was decimated by a plane crash in Munich on February 6, 1958. Twenty-three people died, including eight players. There is still a clock outside the stadium that is part of a memorial to that team.

Busby rebuilt the team around legends Denis Law, Bobby Charlton, and George Best — the “United Trinity” whose statue faces that of Busby outside the stadium. All three were European Footballers of the Year at various points, and together they won league titles, FA Cups, and England’s first European Cup in 1968. But Busby retired in 1969, and in 1974 United were relegated. More on this in a bit.

They got back up in a year but essentially floundered for another decade before hiring Alex Ferguson in 1986. He won 13 league titles (including three in a row twice), five FA Cups, four League Cups, and two Champions League titles — one of which came in the famous “treble” season of 1998–99, when they also won the league and FA Cup.

Ferguson retired in 2014, and another period of floundering began. They have won each domestic Cup once since then, but for their legions of fans, that’s not good enough. The fear is that they will suffer the same fate as their great rival Liverpool, who won everything in the ’60s to ’80s but then didn’t win the league for 30 years. 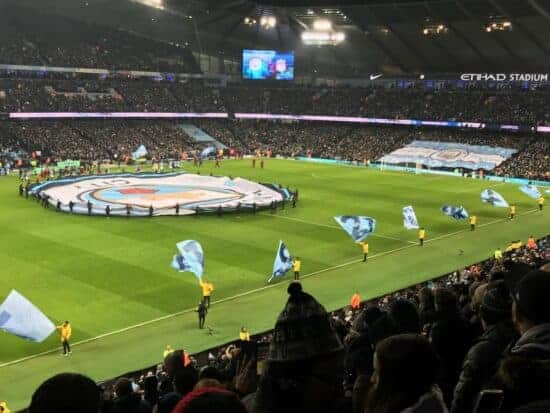 Founded in 1880, City became the first Manchester club to win the FA Cup in 1904, but then financial troubles, highlighted by a fire at their ground, led to struggles and a new home, Maine Road, in 1923. They won another Cup in 1934, then the league in 1937, then declined before winning the Cup again in 1956. That final was famous because their goalkeeper, Bert Trautmann, played the last twenty minutes despite breaking a bone in his neck. Granted, he didn’t know he had broken it, but still. (We reviewed a movie about Trautmann.)

As recently as 2008, they were in financial trouble. Then they were bought by some very wealthy oilmen from Abu Dhabi, and they immediately started throwing the money around. They won the FA Cup in 2011 — their first trophy since 1976 — and have been a force since then.

They won the league in the last minutes of the 2012 season (also more on that in a bit) and have since won the league four more times, including 2018, 2019 and most recently in 2021; won the League Cup six times (and are the current holders and have won four straight and five of the last six); and won the 2019 FA Cup. 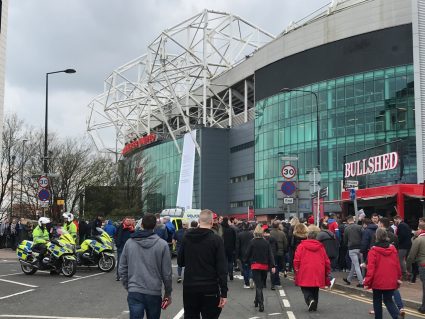 The first league game between the two clubs was in 1894, and the first meeting in the top division was in 1906. But according to Wikipedia, “Before the Second World War, many football supporters in Manchester watched City one week and United the next. After the war, a stronger rivalry developed and following both teams became uncommon.”

After the war, City had the best of it with United until the late 50s, but Busby’s teams dominated the next 10 years. After his retirement, City had another resurgence, losing to United only twice between 1968 and 1976. It was then quite even between the two until Ferguson came along.

City didn’t beat United at all from 1989 to 2002, and they didn’t win at Old Trafford from 1974 to 2008. But that’s when City’s big money came online, and after a period of rough equality — and epic games — Ferguson’s retirement in 2013 signalled the beginning of the current era in which City have won eight of 17 games, compared to just 11 of 47 against Ferguson. 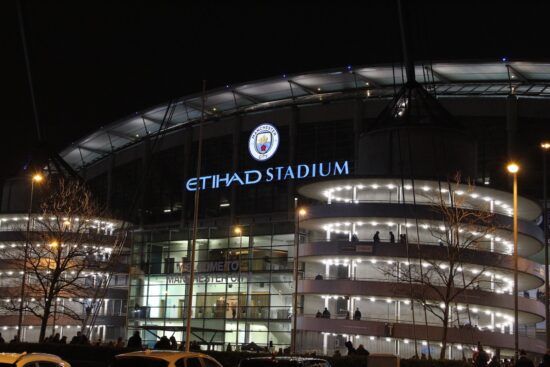 Man City vs Man United: Key Games Over the Years

We mentioned Law above; he’s a United legend, with 237 goals in 404 appearances over 11 seasons. He had actually started his career at City and wound up back there after his glory days in red — just in time to score a legendary goal, back-heeled, at Old Trafford, to virtually seal United’s relegation for a season. He famously, as you will see here, refused to celebrate, and also said in the interview that he hated to think of winning or losing the game.

Incredibly, that goal was also his last kick in league football.

Often called the best game in Manchester Derby history, this one will be of some interest to Americans as City’s side included Adrian Heath, now manager of Minnesota United in MLS.

In the return leg later that season, Ryan Giggs gave United a 1-0 win with his first goal for the club.

This video has some good shots of Maine Road, City’s old home, and the great Martin Tyler on commentary — plus an incredible fightback from United for the win, led by the great Eric Cantona.

In an earlier game, Keane had injured his knee on what Haland thought was a dive — leading him to taunt Keane as he lay injured. Keane, not one to forget, took a few years to get his shot at revenge, effectively ending Haland’s career in a Manchester Derby.

If the name Haland sounds familiar, it’s because his son Erling is now a superstar with Dortmund.

In the summer of 2009, Carlo Tevez left United for City, leading City to put a billboard in town welcoming him to Manchester. That led Ferguson to call city a “small club with a small mentality,” and also United’s “noisy neighbors.”

United, meanwhile, signed Michael Owen, formerly of hated Liverpool and known for injuries — a move not met with glee by United supporters. Naturally, both players would be highly involved in a classic derby months later. Check out the Fan Zone broadcast of thisthatone!

That season City and United played four times, including twice in the League Cup semis, with United winning three via goals in injury time — also known as “Fergie time.”

Lip-readers say that Ferguson jumps off the bench here yelling, “Fucking hell.” Seems about right. Also of note is that Rooney, in celebrating, ran over to the City fans in the corner and then turned his back on them.


United won the league that year, but City knocked them out in the FA Cup semis, then won the Cup, their first trophy since 1976. The Manchester Derby was about to get serious.

The League and Cup winners kicked off the next season in a “friendly” at Wembley, and City went up, 2-0. Cue Fergie Time.

If there was any doubt the “noisy neighbors” were becoming more than just that, it was all but removed in their first league meeting of the season. From Mario Balotelli’s “Why Always Me” celebration to the final scoreline, announcers calling it a “seismic day in English football” have certainly been proven right since.

City’s third goal here, by the way, was Sergio Aguero’s first for the club.

City won, 1-0, at home, but all anybody remembers is the two managers going at it on the touchline. Here, they each offer their own perspective.

This isn’t technically a Manchester Derby moment, but it bears remembering. With minutes to go in the season, United were set to defend their title on goal difference, having won at Sunderland. City trailed Queens Park Rangers at home and needed two goals. The rest is, well, stupendous!

City needed a win at home over United to win the league, and when they led 2-0 at halftime, it was party time. But another classic was on tap instead of another title — at least for that week. City won it seven days later.

Owing to the fairly short history of women’s football in England, there have only been 26 meetings between Manchester City and Manchester United women’s teams. And in this area, City are clearly on top, having won the league once and the FA Cup three times (seven team trophies overall), while United’s women have just one second-tier league win.

In all, City’s women have 13 wins in all competitions to United’s eight, with five draws.

How to Watch the Manchester Derby on Television

Man City vs Man United, along with all Premier League games, are on NBC’s streaming service, Peacock, in the US: