In another excerpt from my book, The Groundhopper Guide to Soccer in England, I discuss a common theme in football history: The Great Escape.

A Great Escape is simply when a team seems “nailed on” for relegation to the next league down in the English football pyramid, only to beat “the drop” and “stay up.”

Everybody loves a great escape – well, except the folks who didn’t get out. So, as part of my study the game series, I offer some notable Great Escapes from the Premier League Era (since 1992).

Coventry City 1997: Coventry, now in the Championship, get some special mention because in the 30 years they spent in the top flight, they saved survival until the last day 10 times! As Sunderland and Middlesbrough both failed to win on the last day, Coventry won at Tottenham, 2-1 and went from 19th to 17th. There’s a famous image of a Boro player named Juninho weeping after their game at Leeds United. 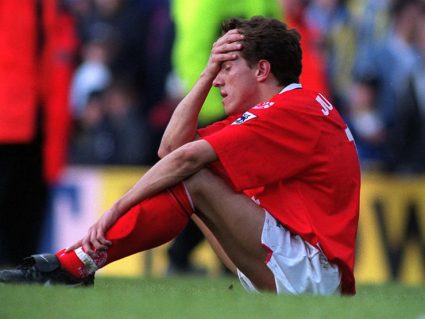 Sunderland 2014: In the drop zone in April, with away games left against Man City, Chelsea and Man U, their manager Gus Poyet said it would take a “a shock, a miracle.” They drew at City, won at Chelsea and Man U, won two home games and coasted on in. I happened to be at that Chelsea game, which also ended Jose Mourinho’s 65-game unbeaten home run as Chelsea manager. Here is the last couple of minutes, shot from the Sunderland end:

West Ham 2007: They were 10 points from safety with 10 games to go, went on a run, and had to win at Man U the last day to stay up. They did, but Man U – having already won the title – was fined for playing a weak side. Sheffield United went down.

Here’s the video. The best parts are West Brom’s first goal on a substitute’s first touch of the game (0:50 — watch for a minute), when they heard a positive score from elsewhere (2:45) and then the excruciating postgame wait (starting at 3:10).

Leicester City 2015: Forget Christmas: Leicester were bottom at the end of March. They had won four of 29 games. All they did then was win seven in a row to get to 14th and stay up – and then win the whole league the next year. And then make the quarterfinals of the Champions League the year after that!

Fulham 2008: The Cottagers were six points from safety with five games to go. They won one, lost one, then trailed 2-0 at Man City with 20 minutes left. They scored three in that one, then gutted out a 1-0 win at Portsmouth on the last day and beat the drop.

A Few From Other Leagues:

Carlisle 1999: Last day, game at home, score tied. One last corner kick in the final seconds. Need a goal to stay up. Everybody in the box — including the Carlisle goalie, Jimmy Glass. The local radio commentator famously said, ““Jimmy Glass, get up there. You might as well for heavens’ sake.” The rest speaks for itself:

Luton 1983: They won at Man City on a last-minute goal, keeping them up and sending City down in front of their own fans. All these years later, Luton are in the Championship and City are one of the best teams in the world. The Luton manager running and hopping onto the field in his suit is a famous image:

Torquay 1987: They were about to go out of the league entirely, needed a late goal – and then a police dog bit one of their players. I’m serious. They regrouped, scored a late equalizer and stayed up.

Bournemouth 2009: The Cherries were almost out of the league, but a late goal by Steve Fletcher in the last home game kept them in it. Six years later they were in the Premier League until being relegated in 2020. 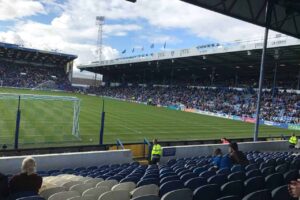