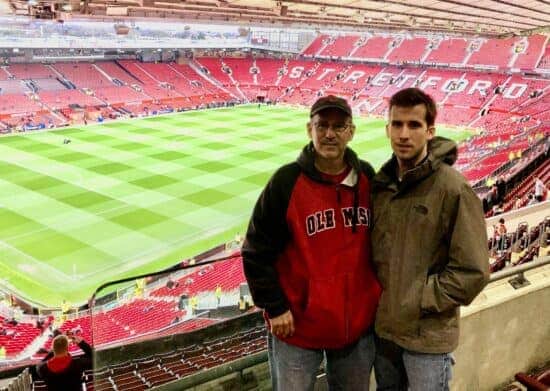 The Smiths traveled from Atlanta, GA to England in March 2022. They saw two Premier League games while enjoying Groundhopper Guides’ tickets and hospitality — the 500 Club at Old Trafford, and our longside seats at Selhurst Park.

They offered to summarize their experience for our Reader Reports series. Here is what they wrote to us after the games.

This Reader Report was written by Bruce Smith. It has been edited for clarity. All photos and videos are courtesy of Mr. Smith unless otherwise noted.

My son, Ryan, and I recently went to our first Premier League game, thanks to tickets purchased from Groundhopper Guides. It was a home game for Manchester United against Tottenham. Prior to the game, we agreed that we wanted to see both Ronaldo and Harry Kane score a goal. By halftime, it was Ronaldo 2, Kane 1. Then, with 8 minutes left, Ronaldo scored a header on a corner kick to win the game 3-2, sending the home fans into a frenzy. Are you kidding me? Are all games going to be like this?

Everything about the trip went great. We flew into London Heathrow and took the train to Manchester. We stayed at the Hilton Garden Inn Manchester Emirates Old Trafford, so we were within walking distance of the stadium. On the day of the game, we went to the National Football Museum in Manchester, and the following day we went to the Manchester United Museum at the stadium. 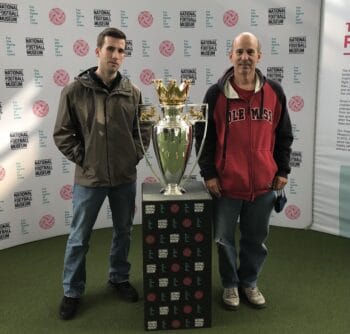 Ryan and Bruce with the Premier League trophy at the National Football Museum.

We took the train back to London and saw another game two nights later, with Crystal Palace hosting Manchester City. It was a clash of styles and skill levels. Manchester City dominated, but never could score, and Crystal Palace had a number of breakaway counter punches, but could never get a goal. It was a completely different environment, but every bit as enjoyable as the first game at Man United. Whereas, Man United plays in a large 75,000 seat stadium, Crystal Palace plays in a 26,000 seat stadium right in the middle of a neighborhood. 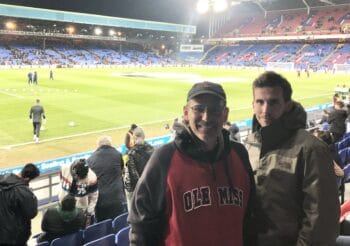 Bruce and Ryan in their Main Stand seats (Block B, Row 11) at Selhurst Park.

Paul and the team were always very responsive to emails leading up to the trip, despite having the incredible obstacles inherent in trying to run a travel-related company in the middle of a pandemic. Thank you for making it easy, Groundhopper Guides!
Thank you, Bruce and Ryan, for sharing your experience with us!

Are you looking to see a Premier League game? Groundhopper Guides can help you, too! Fill out this form, and we’ll get back to you shortly.