La Liga and Segunda Divisíon clubs for the 2022-23 season.

Here is a map of soccer teams in Spain, showing the top two tiers, La Liga and Segunda Divisíon. We also have information on how to watch or stream La Liga and how to get La Liga tickets.

La Liga is the top tier in Spain, and Segunda Divisíon is the second. For the 2022-23 Spanish football season, six teams switched leagues from the previous season:

From Segunda Divisíon up to La Liga:

From La Liga down to Segunda Divisíon:

How to Watch or Stream La Liga Games

Viewers in the United States can watch La Liga on ESPN+.

Watch Spanish La Liga on ESPN+ in the USA.

Groundhopper Soccer Guides is an authorized reseller of La Liga tickets and hospitality at Atlético Madrid, Real Madrid, and Barcelona. To find out our current pricing and availability, fill out the form below, and we will be in touch. 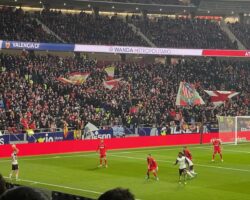 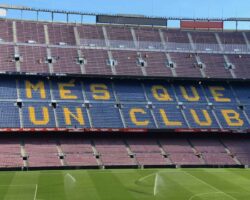