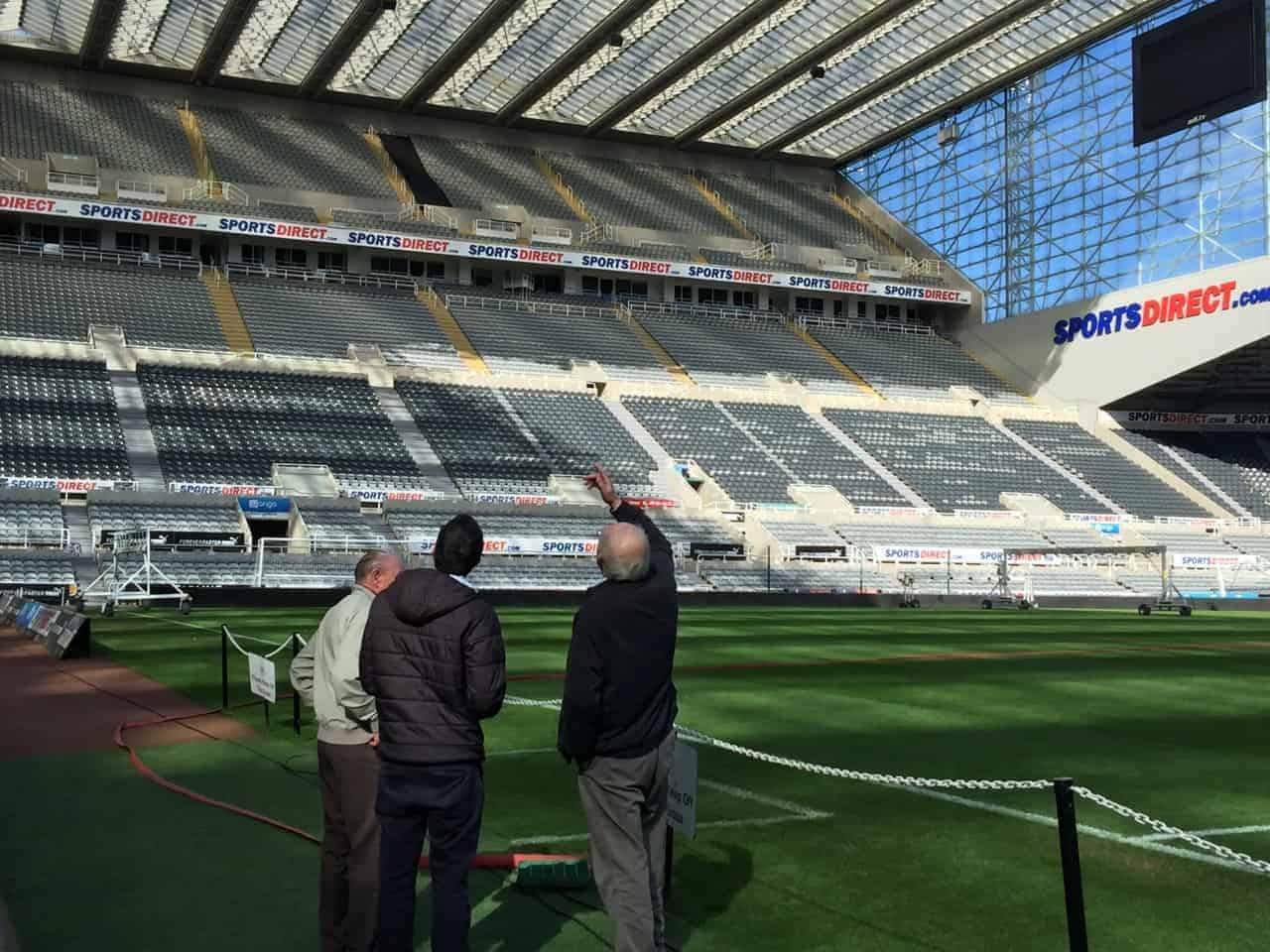 Taking a tour of St. James’ Park, home of Newcastle United FC, is like visiting the city’s cathedral. 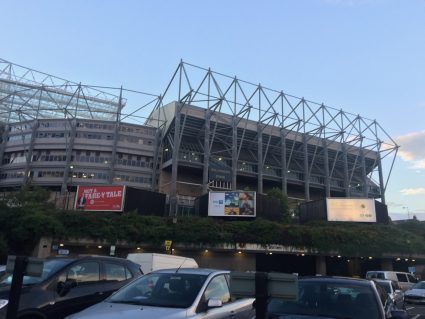 I assume Newcastle, a wonderful and historic city, has a fine cathedral … somewhere. But without a doubt the biggest house of worship in town, the one that inspires the most devotion and passion, the one you will see rivers of people flowing towards every other weekend, is the 52,000-seat football ground at the top of the hill. It is visible from literally every part of town.

I can’t think of a place — certainly one the size of Newcastle — more connected and thoroughly associated with its football club. They have had success, but not won anything major for 50 years or more, and yet the fans fill St. James’ Park on a regular basis, travel with the best of them, and demand much of the their club — much more than they’ve been getting.

And at the hub of it all is a truly amazing stadium. With 52,000+ seats, it is now the eighth largest in England — the seventh largest for a club, with Wembley being the largest of all. But that’s only been a recent development, since West Ham moved into London Stadium, Tottenham into their new place, and there were expansions at Manchester City and Liverpool. And when I attended a game there, it was a Tuesday night, against Norwich City in the Championship, and there were more than 45,000 people there, singing like crazy. 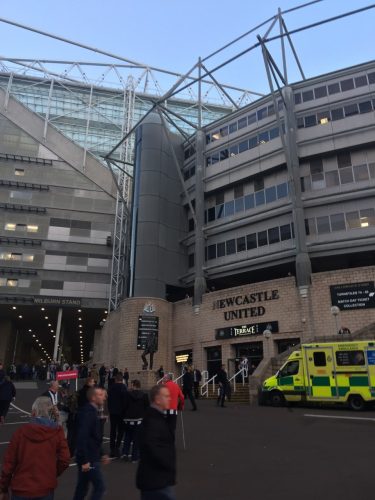 Magnificent St. James’ Park is right in the middle of town, 15 minutes from the station.

The stadium is so packed into the middle of town that a city street goes under one stand (at right).

They offer several tours, two of which are pretty standard for clubs:

But they have two other tours that sound amazing.

One is a new helicopter tour, which I don’t think any other club offers. You take the regular stadium tour, have lunch, then go out to the airport for an aerial tour of the city and stadium. That’s £139.

The other is the Rooftop Tour for only £17.50! You go 150 feet up onto the roof, which is the largest cantilever structure in Europe. It’s glass to let the sun hit the grass, on the rare occasion it shines in the northeast of England. The tour happens twice each (non-game) weekend day from April to October.

I only found out about this option during my regular tour, so I didn’t get to do it. Here is a panorama from the top tier, featuring the Georgie accent of our cool guide:

You can book all these tours on the club’s website.

The rest of the rooftop tour is the usual stuff: media room, dressing rooms, pitch-side, but they also include the security control room, which is kind of cool.

Here is the tunnel walk-out, a feature of every tour. The guy with the beard is our guide, and the two older fellas are the two Dennises. More on them in a bit.

After my tour, the Dennises invited me out for a pint at The Strawberry Pub, right across the street from the ground and an absolute must-visit if you’re on a soccer tour. On game days it will be, as they say, heaving. On others, stop in for a pint and check out the memorabilia. 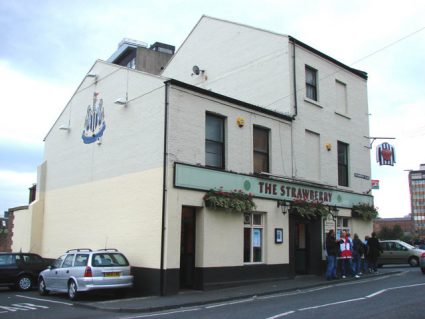 Another hard and fast rule of English soccer travel: If local fans offer to buy you a pint, say yes. And them buy them one back. This is especially true if the offer comes from two older, utterly charming men, both named Dennis, who have been supporting Newcastle since the days of black-and-white photographs, who remember the three FA Cup wins in the 50s, who come to town for a pint every now and then, just because. 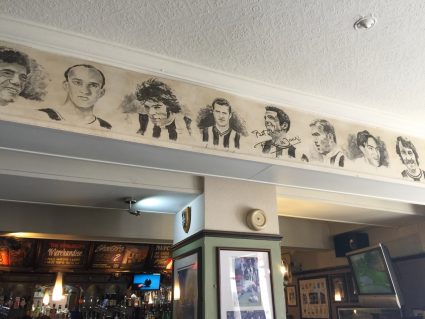 Inside the Strawberry Pub.

If you haven’t guessed, I did say yes, and even though I don’t drink alcohol anymore, sitting with the Dennises in the Strawberry, sipping lemonade while they told me stories about the old days, and trying to make them laugh, was one of the highlights of all my English soccer travels. Occasionally I would make one of them nod his head and say “Aye” in agreement with me, and at least once I made them laugh, and I got a “Good lad” from them. I wanted to hug everybody when I walked out of there, and (don’t tell my friends in Sunderland), but I really admire the heck out of Newcastle United and hope they do well … for the Dennises, I mean.

Anyway, below is my phot0 gallery from the tour; click on the first image to scroll through them all. To read my other stuff about Newcastle — including the hospitality options I sell there — you can check their club page on this site. For more information on taking a tour, see nufc.co.uk.