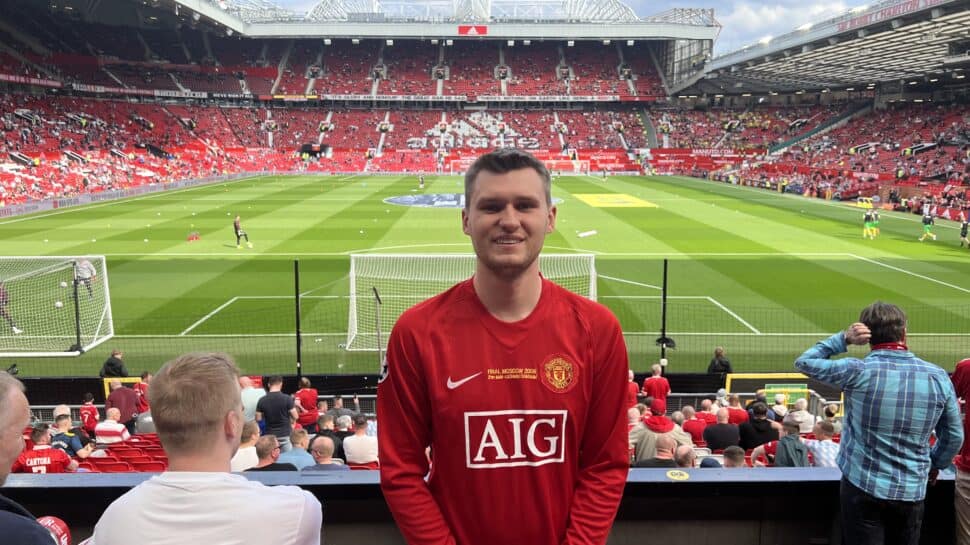 Groundhopper Soccer Guides exists entirely to help people not just go see soccer games in person, but navigate all the vagaries of buying tickets, making plans, getting to the stadium, and having the smoothest experience possible. Andrew, a Man United fan whom we helped get to Old Trafford, shares his experience.

(Note: While we do our best with tickets, plans, etc., we cannot guarantee your favorite player will score a hat trick while you’re there, or that the sun will shine!)

This Reader Report was written by Andrew Hudson. It has been edited for clarity. All photos are courtesy of Andrew.

My name is Andrew. I am a 23-year-old Man United fan from Tampa, Florida. Cristiano Ronaldo was my idol since his first go-around at United.

I had never been to a match in the UK, and my research quickly showed me it is a lot harder to get tickets in the UK than it is in the US. I did not want to become a member of Manchester United and then hope to get two seats next to each other, and I did not want to use a risky ticket site, so it seemed like a hospitality package was my best option.

Groundhopper Guides got them two seats together in the Stretford End!

I saw that there were a few major hospitality companies, so I gave each of them a ring and explained what I was looking for, but my experience was not pleasant with any of them. I found Groundhopper Soccer Guides, and I sent in an inquiry; the response I got was very favorable and buyer-friendly.

I bought the International Suite package for United vs Norwich City. I did this primarily because the section is located right in the middle of the Stretford End. My experience after buying the tickets was one of the best customer service experiences I have ever had.

I bought the tickets in early December for the match that was in the middle of April. The exact date and time of the match was supposed to be announced in February, but due to the Premier League incompetence it did not end up getting released until the end of March! 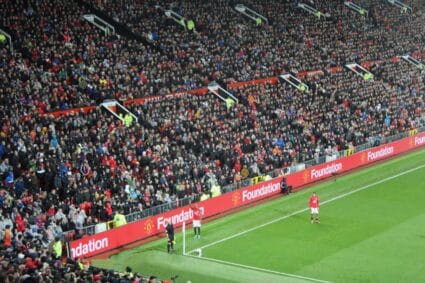 Corner Kick in front of the Stretford End at Man U’s Old Trafford.

Since I was coming from abroad, the date and time of the match was a big deal for me. In the two weeks I was in the UK, I had a very packed schedule and it was very annoying not knowing what day of the week the match would be on. The Groundhopper staff were fantastic in explaining everything to me, keeping me updated, and responding to my questions almost instantly. Although they could not tell me the date of the match, it was very comforting to have someone understanding of my situation.

I was coming from London for the game, but I was not staying over in Manchester. Right after the game I had train tickets to Liverpool. We got to Manchester Piccadilly about four hours before the match. We left our luggage with Left Luggage at the train station. We took a taxi to Old Trafford, which was only about 10 pounds. We went right into the International Suite and it was a very nice lounge area. We had fish and chips and beer while watching the Tottenham match. The food and drink were a bit pricey, but that’s Manchester United.

Groundhopper Guides can’t guarantee sunshine or hat tricks, but we can get you this view from the Stretford End.

The game was everything I could have hoped for: United won and Ronaldo scored a hat trick! The suite was right near the tunnel where the players leave, so we waited out there for about 45 minutes and watched the players leave and let the traffic die down a bit. After that we got an Uber back to Manchester Piccadilly and went on our way to Liverpool. There were no Covid protocols at any time during the experience.

During the trip, I also toured Wembley, Tottenham Stadium, and the Emirates. Tottenham and Wembley were fantastic, but Arsenal was a disappointment. It was overpriced and it was a boring self-guided tour.

I don’t have many tips for future customers. I would just say always keep in mind that the match date and time can move and do not rely on the Premier League to put the schedule out on time.

We had an incredible experience, and I will be using Groundhopper Guides the next time I come to the UK!

Looking to see a Manchester United home game? Fill out this form, and we’ll get back to you shortly.