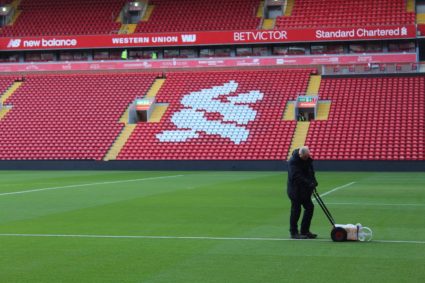 Certainly, on the question of ground versus stadium, which I have written about before, Anfield would seem to have crossed that hard-to-place line already. And as for club … I mean, it implies some gathering of like-minded individuals to enjoy a common activity, right?

Stevenage is a club. Liverpool used to be but is a corporate behemoth now. And, of course, it is paying off; they are current Premier League champs and won the Champions League in 2019.

And calling them a behemoth isn’t to knock them, either. They put on a terrific show, on the pitch and in the stands. Just don’t go there thinking you’ll enjoy some kind of grass-roots football experience like you would at, say, Cambridge United. Nor will you see much of the Old Days.

Nowhere is this more evident to me than when you’re standing in front of the new, expanded, monumental Main Stand. It is there where our tour of Anfield begins. 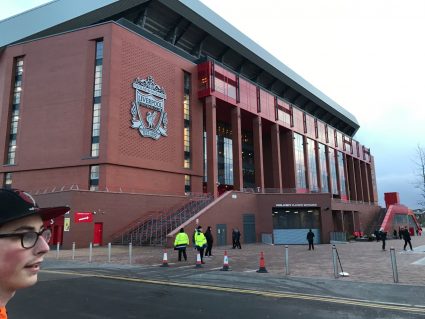 When Liverpool expanded to just over 54,000 capacity, what they did was build their Main Stand up, out and back. It is now proper huge, and as you see at the beginning of the tour, somewhat ornate. Or at least posh. I might throw in “sterile,” as well, but I’m kind of a crank. 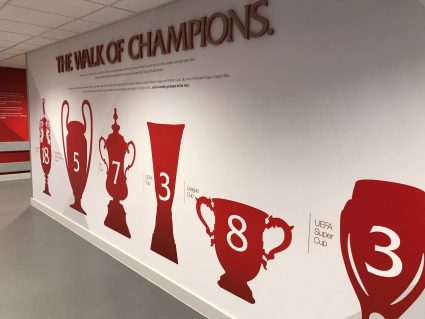 A message for the visitors in the players’ tunnel.

Speaking of crank, when the tour guide tells you how lucky you are to walk on the same staircase as Steven Gerrard and Kenny Dalglish, I kind of throw up in my mouth a little. May we kiss the carpet?

We didn’t get into the dressing rooms, because I was taking the game-day tour, where you actually have a guide. Normally you have a self-guided audio tour, or you pay through the nose for a club “legend” to walk you around. (Definition of “legend” in English football: Anybody who ever played for the club and is available to lead tours.)

You do get to walk through the tunnel, and you can touch the famous “This is Anfield” sign. But it’s encased in glass, it’s the third one they’ve had, and owing to the expansion this isn’t exactly the tunnel all those legends walked through. I know: crank. At least it is the one the current players slap on the way out.

You also get to go pitch-side, which is quite impressive:


And then you go and “stand on the Kop” for “amazing views,” according to the tour description. A crank would point out that you sit in the front row, in the corner.

But you do get to hear stories from the guide, which is cool. He tells you about the old Kop, which held nearly 30,000 standing people who would become a single, living thing that moved and swayed according to its moods and the location of the ball. It wasn’t uncommon, he said, to start the game in one corner and wind up in the opposite — all without intending to or really moving your feet. 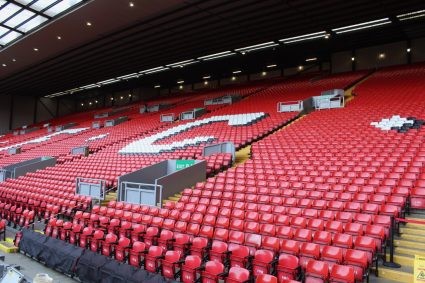 “It wasn’t a place for kids” seems an understatement, considering they wouldn’t be able to see anyway, and you had to be physically strong to withstand what was going on. And then there’s the whole urine situation.

As the guide tells it, imagine you go and have a few pints, and then you stand on the Kop. Biology eventually takes over, but even if you could get out there, the Kop only had two banks of toilets — at the top corners! So, well, people would sneak in bottles or cups. And maybe such would be stored in the back pocket of their mate in front of them. (Of course, maybe such would overflow.) Or maybe — and this was confirmed by a tour member who had stood on the old Kop — one would simply announce, “Stand clear, boys” and let it rip.

All of this accumulated into — and this was also confirmed by our Kop veteran — the “Yellow Mersey” at the bottom of the stand. I almost threw up in my mouth again, but for different reasons.

I love sharing this video of the old Kop:

These days, the Kop is an all-seater stand that holds 13,000 people, and it is still spoken of as a single thing, or entity. I once saw a former Liverpool player come back with his new club, and the articles all noted that he “was applauded by the Kop.”

Of course, these old timers will also say that the new Kop lacks that much-discussed alchemy of English football, atmosphere. To which our guide said, “Come tonight for the FA Cup derby and tell me if it lacks atmosphere.” And to which I would say, “Fuck atmosphere — the thing has toilets now!” 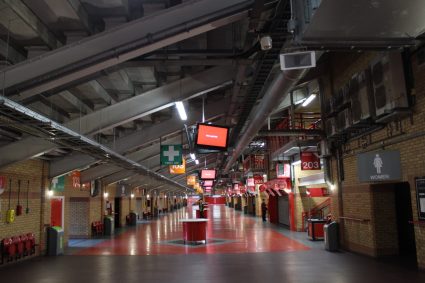 Three more stories from the Kop:

One is that, by many records, the act of singing at soccer games began on the Kop in the early 1960s. There had always been chanting at games, but here the fans took the popular songs of a certain four-member local band and began changing the words to make them about certain players. It all spread from there.

Another is where the traditional singing of “You’ll Never Walk Alone” comes from. Somebody asked legendary manager Bill Shankly — the man who basically created the Liverpool Football Club we now know — what his favorite song was. He responded that he didn’t really have one, but his wife’s favorite was this old Rogers and Hammerstein song that had been redone by another local band, Gerry and the Pacemakers, and it would be lovely if the fans were to sing that one. “Well,” said our tour guide, “If Shanks said to walk across the Mersey, the fans would give it a go, so that’s where it started.” “Shanks” would salute the fans in a traditional arms-out pose which he now holds in his statue. 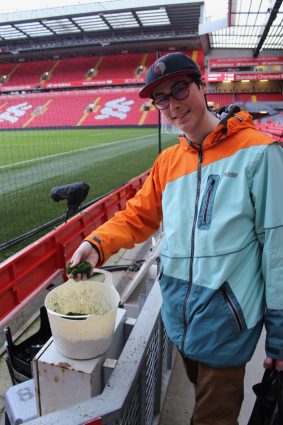 You can’t go on the pitch, but they let us touch (some of) it.

And finally, there is the Last Game with the Old Kop. They had to go to all-seaters by national law, so at the last game — a 1-0 loss to Norwich — they say the stewards all looked the other way while fans came in with hammers, bolt cutters, screwdrivers, anything they could. And after the game, the throng absolutely demolished the Kop. They say grown men could be seen walking away in tears, carrying chunks of metal and concrete that probably still adorn mantles all over Liverpool.

After the tour, you are released into the museum and club shop, both of which are palatial. The museum highlights are the collection of five European trophies, most of any English club, and the Steven Gerrard Collection, which is mainly of shirts he swapped for with other (actual) legends of the game. There is also a repeating video of him talking about all this, and I have to say, he seems a bit dour to me. Does he smile? 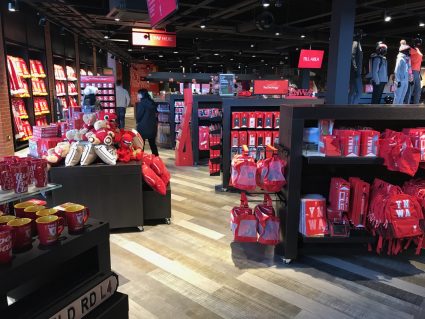 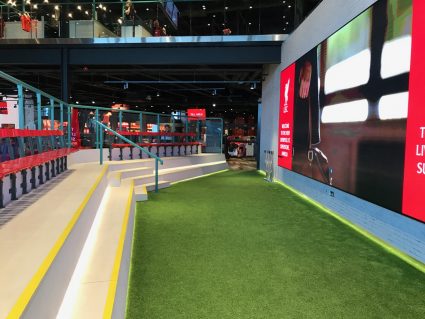 Some kind of little theater in the store. 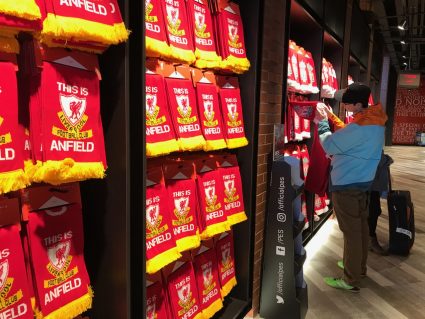 Couple of scarves for sale.

Around the stadium, one can still find patches of the old “ground” days. Two pubs on the street, the Albert and the Park, brim with atmosphere on game day. 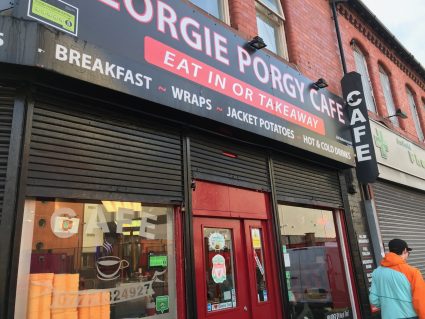 Local “caff” across the road.

And we popped into a local cafe, Georgie Porgy’s, for an absolutely classic (read: cheap and not very good) cafe meal. I got a Scouse Pie, because I had read people in town are called Scousers and this comes from a local stew called scouse. So I asked what is in a scouse pie, and the over-worked lad behind the counter said, “Scouse.” After an awkward silence, I said, “Right, I’ll have that.”

Having now eaten a scouse pie, you might think I could tell you what’s in it. I’ll try. It’s … gray. There appear to be peas in it. Perhaps carrots as well. There was a crust down there somewhere. It was pretty awful. But it was also like £2.90, it filled me right up, and they had the decency to slather it with gravy. And I am sure there is better scouse available elsewhere in town … right?

I sound cynical (and hell, I am) but I am thoroughly impressed by everything Liverpool FC has become, “club” or not. And it’s also true that I am glad some of the old touches (minus the Yellow Mersey) survive. And the game I saw that night bordered on a footballing religious experience.

So yeah, go and tour Anfield. And get into a game if you can (I can help). Because whatever Liverpool is or isn’t, they and their stadium are absolutely the Big Time.

Photo Gallery From My Anfield Tour: