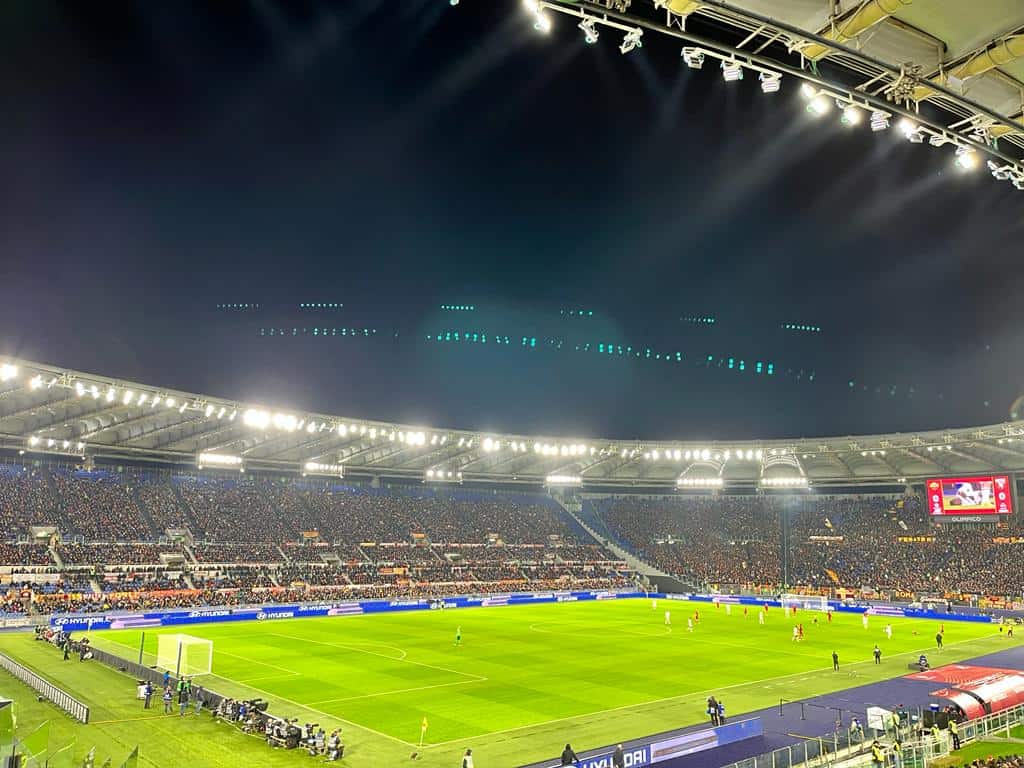 One of Groundhopper Guides’ employees, Emily, lives in Tuscany and recently took her son to a game at AS Roma. Naturally, we asked her to write up a post on her day. Enjoy!

Seeing a Serie A game at A.S. Roma’s Stadio Olimpico is a perfectly Italian mix of color, passion, history and even art.

Ah, Bella Roma. The Eternal City. On this Sunday, though, on the hills of Monte Mario, this ancient city came alive with fans donned in red and yellow. And only red and yellow, because both AS Roma and their competition on the day, Torino FC, share almost the exact same team colors!

The neighborhood surrounding the Foro Italco sports complex is somewhat quiet and residential, although on this day the streets were teeming with fans young and old. The installation is much more than just the stadium itself, as it holds many offices for the Italian Olympic Committee as well as a tennis center.

Check Out Our Profile of A.S. Roma

Stadio Olimpico is huge by Italian standards, holding almost 70,000 people, although that night there were about 45,000 in attendance. There is also a huge outdoor area that guests walk through to find their appropriate entrance and area, and in true Roman fashion, there is even a huge outdoor sculpture garden on the grounds. Only in Italy!

Stadio Olimpico is home to several teams including a second Serie A squad, SS Lazio, where Paul, Groundhopper Guides’ owner and founder, saw a game once. The stadium itself has been rebuilt several times in recent history, all to accommodate UEFA regulations for large events, so there is comfortable seating, modern facilities and large screens so guests can see the game well from everywhere inside the stadium.

Getting to Stadio Olimpico

As residents of Italy, but not of Rome, we had to drive to attend the game. But public transportation is recommended, as there is zero parking adjacent to the stadium. The nearest Metro stop is Ottaviano, near the Vatican, and from there it’s a 10-minute bus ride with a few more minutes of walking. 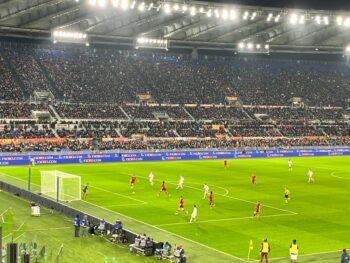 Our Game at Roma

As secret Torino fans, our family was somewhat delighted to discover that our seats were right next to the away fans in the lower Monte Mario section just on the outside of the goal. We were also happy that our seats were covered, as practically all are, since the rain moved in towards the end of the game.

Roma won, 1-0, although Torino played well. The fans in the ends kept the atmosphere interesting with great singing and nonstop noisemaking and cheering. At one point, I’m fairly certain there were some fireworks going as well – which was fun to see from a distance!

The Roma fans are certainly passionate, as expected, with even little kids getting in on the emotional action. There were lots of “baci” and “abbracci” (kisses and hugs) going around after the goal, and it was also very fun to watch the heated and fanatical disappointment when Roma failed to convert other chances. Overall it was a fun and joyful atmosphere! 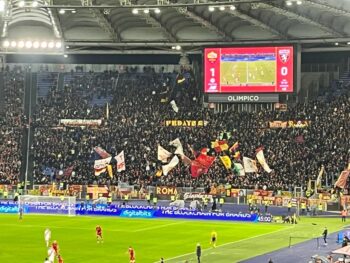 AS Roma fans cheering on their team.

Clearly, Rome is a city where you can see a few games as well as some of the best cultural must-sees anywhere. I thought it was great that we did a Vatican City drive-by with a quick view of St. Peter’s Basilica from the car. I am still floored daily by the history that surrounds you when in Rome and, frankly, in most Italian cities in general. If you get a chance to visit, I highly recommend a trip to the famous Stadio Olimpico for a game – or two!

Fill out this form, and we will get back to you! Just be sure to check your spam folder, as sometimes our responses wind up there.