I finally hit the pause button here in Crewe.

Groundhopping is a fun hobby, and I’ve done more than my share of it: nearly 200 games in just over eight years. But it’s been about 40 games in the last four months, in England, Germany, France, Holland, Belgium, Italy, back to England, back to Italy, Spain, back to France, and now back to England. In one two-week stretch I was was in Rome, Naples, Barcelona, Seville, Lyon and Monaco. Six days later I was in Newport, South Wales. That was just over 10 days ago, and in that time I’ve added two games in London and one last night in Crewe — which, let’s just say, is no Seville.

When I woke up this morning, at the Holiday Inn Express, the actual plan was take a 9 a.m. train to Shrewsbury, check out the town, go to a 12:30 game, find a pub to watch the 3 p.m. USA World Cup game in, grab a train back to Crewe, collect my bag at the hotel, then hop another train to Manchester. Even as I write that, I feel exhausted and stressed out, and — as is often the case — I look at such an itinerary and ask, “Whose idea was this?” 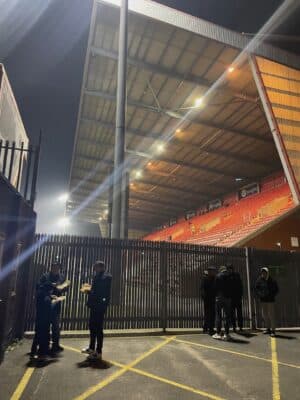 The glamor of groundhopping: pregame at Crewe Alexandra of League Two.

Of course, “a more energized version of myself” is the answer to that one. But even if I could find that guy right now and sit down with him, I would want to know why. Why are you so excited when the Crewe game gets moved to Friday night, meaning you could find another nearby game on Saturday, then get even more excited when one of those is just 40 minutes away by train, so you can grab a hotel in Crewe for the night and make that next-day run? Why?

Even English people, who love football to such an extent that I think they might actually be crazy, often look at like I’m the crazy one. Some of them, of course, express admiration, even while shaking their heads. After all, I’ve done more of “the 92” — 79 as of this writing — then most of them, but when this comes up I use a standard line: “Well, it’s only because you have a balanced and reasonable life.”

And many of you may read the lineup of European cities above and think, “Damn, that sounds fun.” And it can be, for sure. It is, without a doubt, a blessing to be able to do this. But also, imagine yourself actually doing that itinerary, and remember I’m 56, traveling solo, only speak English, and also own and run a business from wherever I am.

Especially now, sitting here at the Holiday Inn Express, with a view of a McDonalds and a car dealership, with a foggy just-above-freezing day just getting started and another crappy hotel breakfast sitting in my gut, considering a trip to Shrewsbury for the day, I do wonder about balance. 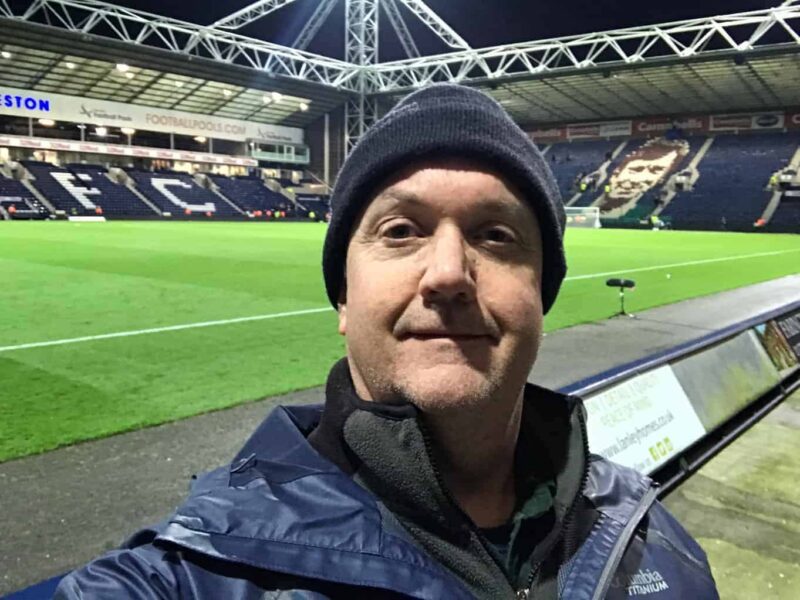 The night I finished the Championship clubs — for then — at Preston North End’s Deepdale.

I mean, there are clear reasons I do this. One is I’m simply a travel addict who doesn’t sit still very well. Like any addiction, there are up days and down, and as even the locals will tell you, a day in Crewe probably counts as a “down.” Last night I sat alone in a plastic chair watching the home team blow a 1-0 lead to lose on a spotty pitch in front of a sparse, non-singing crowd, most of whom booed and cursed their own team at the final whistle, then shuffled off into the cold night.

But before that, I had wandered into the program and badge shop and met Dave, a local who’s been coming for years and has an encyclopedic knowledge of English grounds, like that one end of Swansea City’s old ground used to be a cinema, and part of the old ground at Shrewsbury Town is still standing, although it isn’t in use because they had a falling out with the owner of a junkyard next door. He told me about his trip to Texas years ago, seeing baseball in the AstroDome, and I told him about the Portland Timbers guy with a chainsaw, and he sold me a Barnet FC badge because I’ve been there twice and they never had any.

And truth is, walking out of that game last night I felt pretty good about life, even if I was cold and hungry and about to spend the night alone in a crappy hotel in a crappy English town. Travel, and going to games, is just what I do. 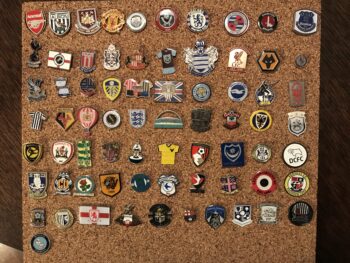 My pin badge collection as of February 2020

Why else do I do it? Because my little business has grown from a goofy idea to one that employs three people and pays for all this travel because for years I went to games and wrote about it. Maybe writing about my time at places like Crewe Alexandra didn’t make that happen, but the cumulative effect of it all did. Also because I am adding to my, and our, knowledge base, which sets us apart from lots of other people selling tickets. And because maybe, in some corner of the world, being an American who has “done the 92” will mean something. And because maybe those of you still reading at this point might want to know how I got on over here.

And if that’s the case, then how I’m getting on right now is somewhere on the spectrum from being tired, definitely, to being “tired of” stuff like packing and unpacking, crappy hotel breakfasts, plastic seats on cold nights, and the home seemingly never winning, to being burned out and a little depressed.

And with all of that, I don’t think a game at Shrewsbury Town, with Lincoln City in town — #11 vs #18 in League One! — is going to brighten my day. I can hear most of my English friends laughing at the idea right now. Shrewsbury isn’t going anywhere, trust me.

So today I rest, by my standards: take the 12:30 to Manchester, watch the US game, and do some laundry. Maybe even have a nice walk. Next up on the groundhopping agenda is a midweek FA Cup replay at Stockport County, which I’m sure means cold and a plastic seat but not packing or a crappy hotel breakfast. And by then, I’ll probably be excited about the whole thing again.

Shrewsbury can wait. I just hope it doesn’t turn out to be the game of the year or something!