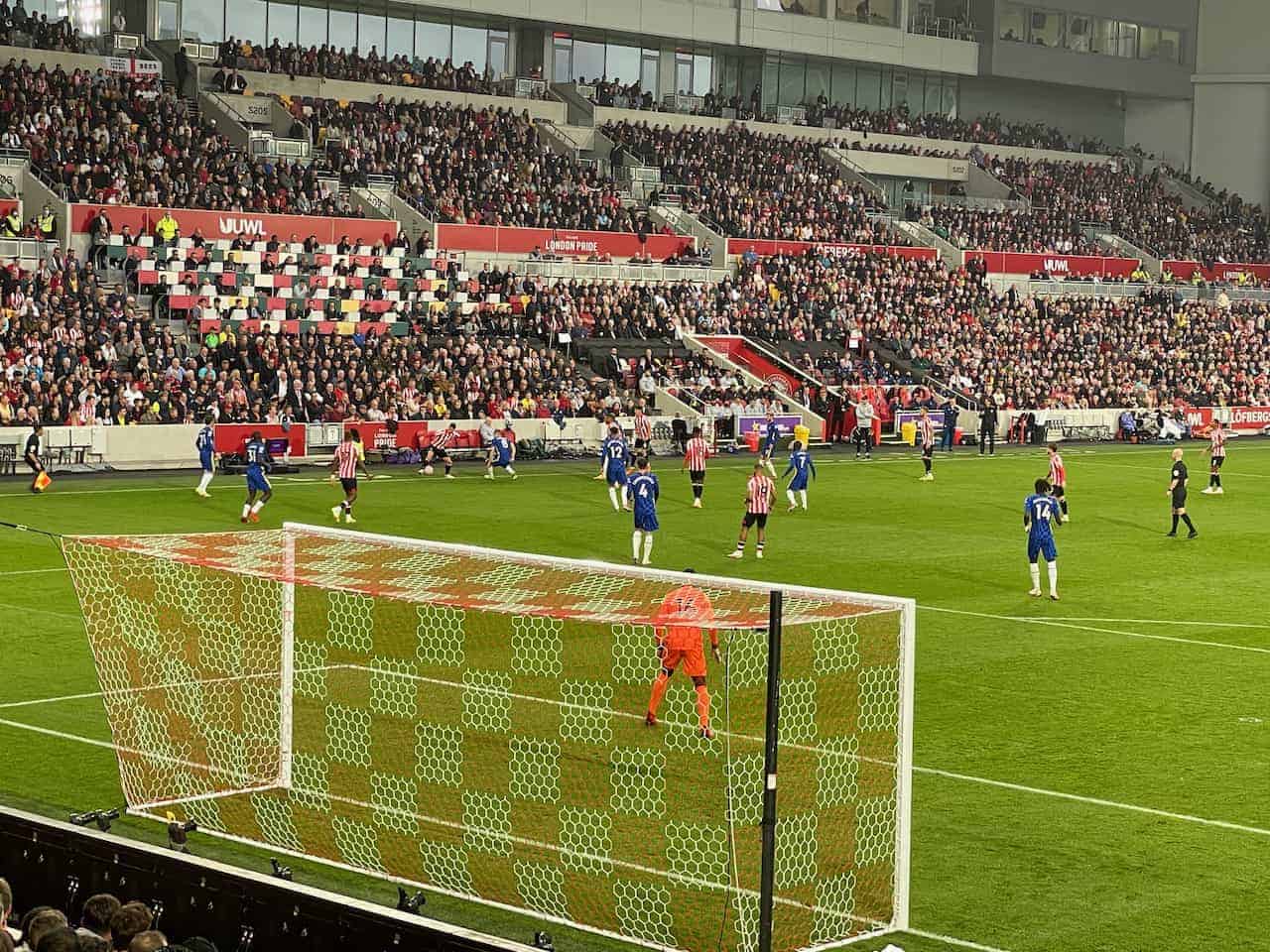 When I visited Brentford Football Club in West London in 2021, they were having probably the grandest days in their history: playing Premier League games in their shiny new stadium. Here’s what it’s like to go groundhopping at Brentford Community Stadium.

It’s hard to imagine a better scenario for what is basically a local community football club: after years of toiling in lower tiers, you slowly and responsibly build the club to be a sustainable yet successful outfit. You outgrow your home stadium of 100+ years but find a spot for a new one in the same community. You build that, then gain promotion to the top tier for the first time in 74 years — just in time to open the new ground!

I had to see this for myself, and check another ground off on my quest to “do the 92,” so I purchased a Brentford membership for the 21-22 season and scored a ticket for their West London Derby with Chelsea. Here’s more on how to buy Brentford tickets). The Bees had already beaten Arsenal and drawn with Liverpool at home; could they possibly challenge the reigning European champions?

Their fans were certainly in the mood:

(This is an excerpt from my book, The Groundhopper Guide to Soccer in England.)

The club was founded in 1889 but didn’t make the Football League until 1920. They got to the First Division in just three years and finished fifth, ushering in their glory years under manager Harry “The Guv’nor” Curtis. They made the FA Cup sixth round and spent several months atop the First Division table; several players got international call-ups.

But World War II interrupted all that. They dropped out of the First Division in 1948, Curtis left in 1949, and by 1954 they were back in the Third Division. They would spend the next sixty years in the third and fourth tiers, save one season in the second tier when they finished last.

Over the years, they made the promotion playoffs nine times without ever going up, the worst being a loss to rivals Fulham in the 2020 Championship Playoff Final. But last year they went back and finally won it, 2-0 over Swansea City. They are back in the top tier for the first time since 1947. 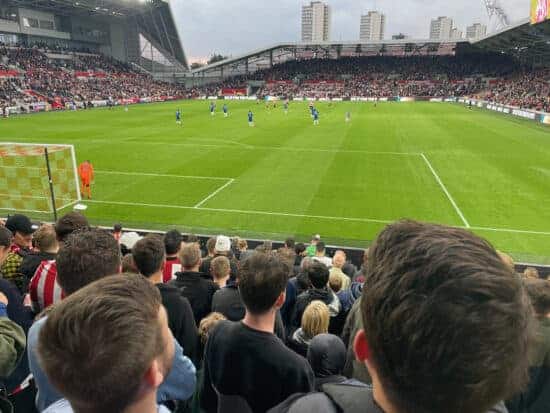 My view of the pitch at Brentford.

Getting to Brentford Community Stadium is a snap; it sits practically on top of the Kew Bridge Railway Station, on the South Western Railway with service from Waterloo 30 minutes away. Just across the River Thames is the amazing and sprawling Kew Gardens, founded in 1840 and said to be one of the greatest such gardens in the world.

And just on the other side of Kew Gardens is the lovely community of Richmond, one of the more posh sections of London and also the fictional home of Ted Lasso and his AFC Richmond Greyhounds. We have a whole post on the Ted Lasso filming locations, but the bottom line is that Ted’s local pub, called the Princes Head in the real world, is about 30 minutes away from Brentford FC by bus — or by a lovely walk through Kew Gardens.

You should also go and pay a visit to what remains of their classic old ground, Griffin Park, and the pubs famously located at each corner. It’s just a 15-minute walk west of the new place. 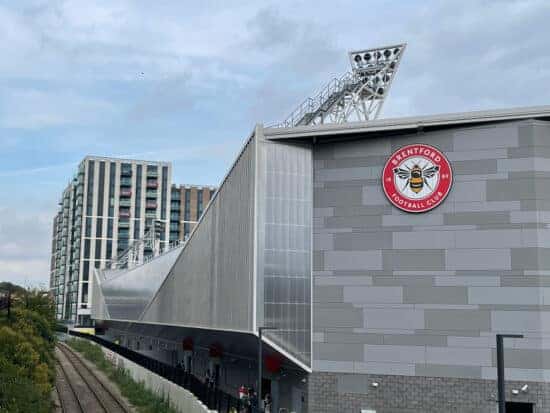 Brentford Community Stadium is “tucked in” like this on almost all sides.

It’s quite remarkable they managed to squeeze a 17,250-seat stadium in where they did. Just yards away from almost every side is either a railroad or a new apartment building. The exterior is a rather shocking, silver spaceship-looking thing, but inside is quite cozy — and can get rather loud. Just ask Arsenal and Liverpool.

It has an interesting shape and character, as well, with one large stand on one side, a smaller one down the other side, and then two not-quite-square sides on each end. The food and drink seem standard fare, but I have to say that — especially considering it’s a brand-new stadium — I was shocked at the lack of leg room. I am 6-foot-1 and was seriously uncomfortable much of the time.

Still, seeing Premier League soccer in a place this size is a treat. Check out how close you are to the players! 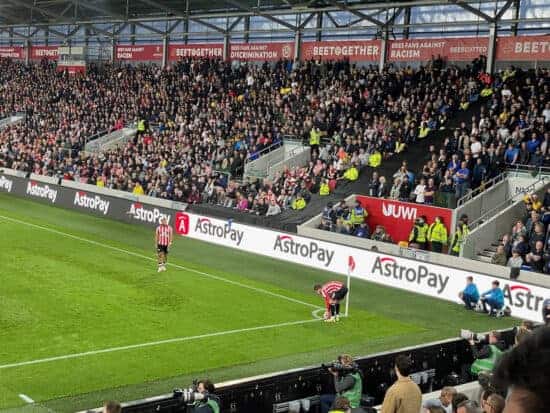 At Groundhopper Guides, we sell tickets and hospitality to 11 Premier League clubs — just not Brentford, sadly. With a membership, and some patience, and some luck, you might be able to buy a Brentford ticket from the club, however.

I would have been thrilled to see any game at Brentford, but seeing them play Chelsea in this cozy little stadium, while riding such a high, was a blessing. Also nice was having some London friends introduce me to John, a season ticket holder for 30 years who goes to every game, home and away, and saw his first game in the early 1970s.

He had me meet him at a great local pub, The Globe, which was packed with Bees fans and is just a little ways west of the ground: 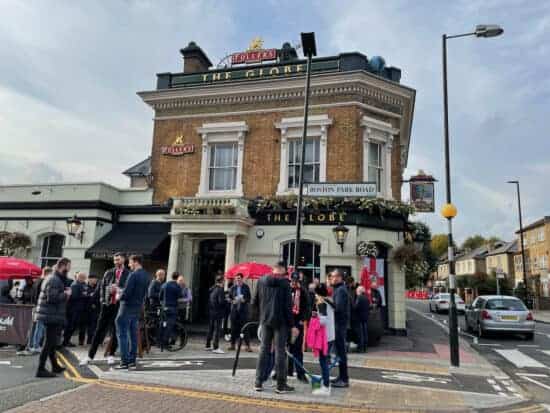 Brentford fans at The Globe pregame. Sunshine not guaranteed on your visit!

With a decent curry in my belly, we were off to the ground, as John regaled me with tales of Third Division clashes and how everyone is in dreamland with where the club is now. Although Stamford Bridge is just over five miles away, this would be the first league meeting between Chelsea and Brentford in 60 years!

A few more images from the pregame scene around the ground: 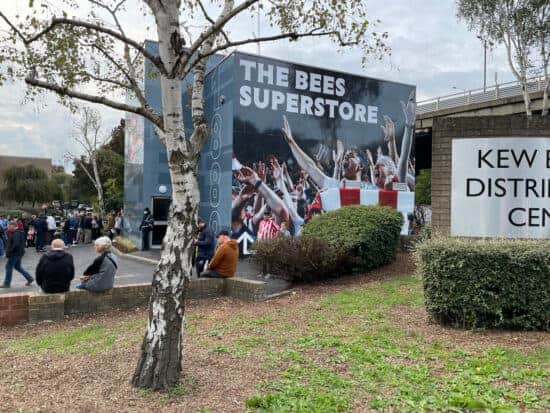 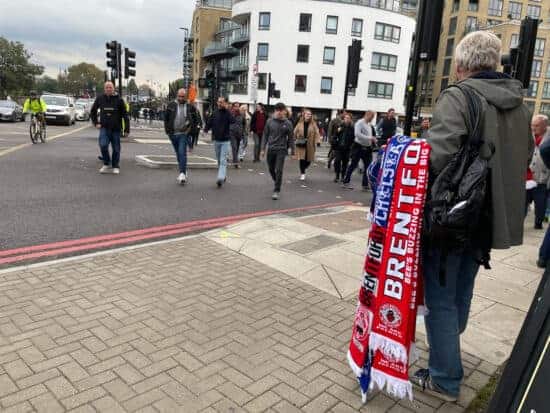 He wasn’t selling a lot of the dual-club scarves. 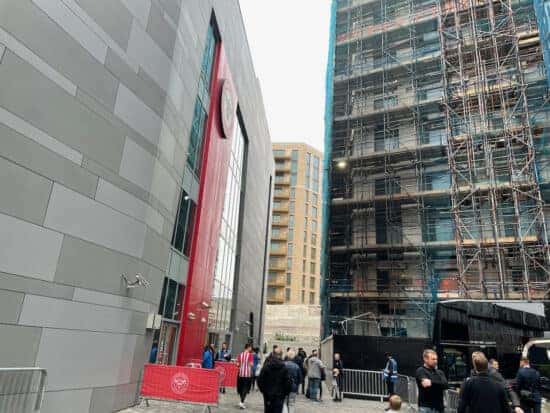 Did I mention the stadium is rather tucked into its surroundings?

I wedged myself into my seat, which was down in the corner by the away fans. This always makes for some good atmosphere and banter, but at times I just feel embarrassed for supposed adults and how they act in public. All along the perimeter of the Chelsea section were people trying to make eye contact with home fans, mainly so they could point at them and then give them the wanker sign. 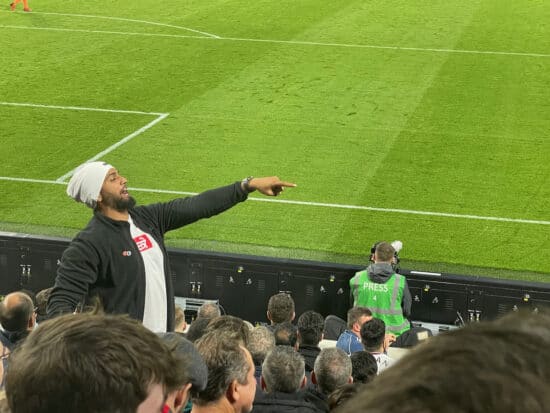 I wanted to tell him the game was the other way! 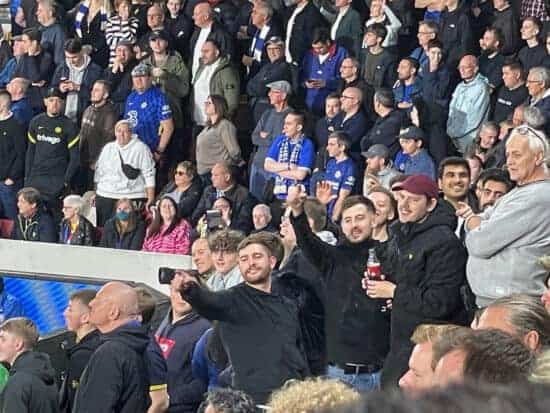 These guys took their job quite seriously.

As for the game, Chelsea — as one might expect — dominated, but could only get one goal for their efforts in the first half. They created more chances and had the ball the whole time, it seemed, but with about 20 minutes to go it was still just 1-0. And then the crowd started to believe they could get something out of it.

Sadly for me, the Bees were playing to the other end in the second half, because over the last stretch, all the action was down there. Chelsea were missing some defensive starters, and Brentford have a young and hungry team with a great crowd behind them, and they honestly battered the Blues for the last quarter of the game. They hit the post twice, and Chelsea’s keeper, Edouard Mendy, was a straight-up hero, pulling out great saves all over the place.

It wound up 1-0, Mendy the hero, and afterwards he went over and gave his shirt to a supporter in the away end. Note here how even some of the Chelsea players acknowledged the efforts of the Brentford fans.

The guy you see at the end there, in black, is the Brentford manager, apparently a worker of miracles.

All in all, Brentford is an inspiring story — a club that rose to the top tier without being bought up by a multibillionaire owner or some foreign government. Seeing them go toe-to-toe with the best in Europe, in their new home surrounded by passionate longtime fans, is really what groundhopping is all about.

So if you can get a Brentford ticket, it’s well worth it!

Stream the Premier League Live in the US

Are you looking to see a Premier League game? Groundhopper Guides can help. Fill out this form, and we’ll get back to you shortly.