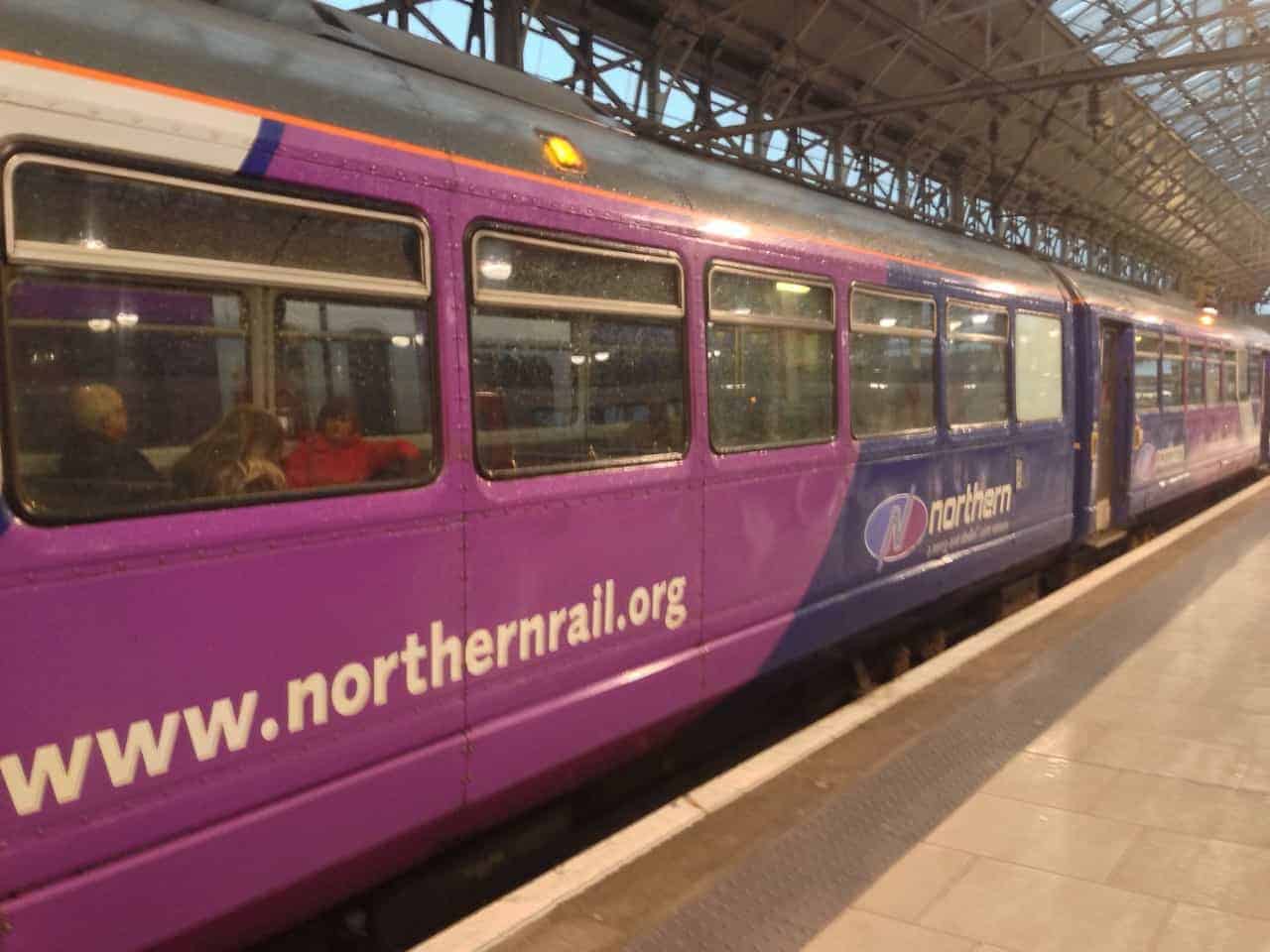 Watching Soccer in England: What Does it Cost?

Watching Soccer in England: What Does it Cost?

I get a version of this question quite a bit: How much does watching soccer in England cost? I thought I’d take a shot at answering it here. 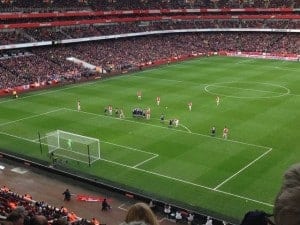 It’s not quite as expensive as you might think to see soccer in England — although Arsenal, here, is pretty pricey.

I have been to more than 100 games at more than 60 clubs in England, so I would like to think I have learned a bit about it. Much of that knowledge is here on my website:

For now, let’s talk about the cost. And let’s also admit right off the bat that we all spend money differently; I am a three-star hotel, maybe AirBnB guy, but some folks stay at the Grand Sheraton in Covent Garden. I strictly use public transit, even buses; some people rent cars and use taxis. Still, here’s a shot at answering the question: What does it cost to watch soccer games in England?

Years ago I started reading this blog called The Art of Non-Conformity, and I love following The Points Guy, who taught me the credit card bonus game. This was critical for me, because in about four years, using credit card strategies plus a few paid flights overseas, I accumulated enough points for seven or eight round-trip flights to Europe, at 60,000 miles/points per ticket. I also earned quite a few free hotel nights.

So that’s one thing to keep in your back pocket, as they say. Go forth and hack! 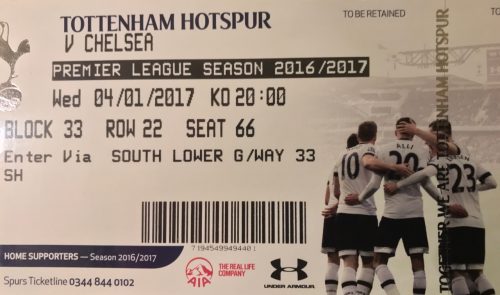 I did a whole post about how to buy tickets for English soccer, but on the cost issue, it comes down to about £45 in the Premier League and £25 in the Championship. Cup games can be as little as £10. And here’s a whole post about the different leagues and cups.

But here’s the thing about the Premier League: the above assumes you can even get tickets from the club. And if you’re set on going to one of the big clubs in the country — Arsenal, Chelsea, Liverpool, Manchester United, Tottenham, Everton and Manchester City  — you will have a really hard time getting tickets through the usual channels. You will need a membership, for one thing, and that’s going to run about £30-40 for each person who wants a ticket. And getting more than one ticket together makes it that much harder.

You might have to get a hospitality package, which is really just a seat plus something else (hotel, meal, stadium tour, etc.) I am an official reseller of these, and as for cost … Assuming you’re looking at a big club, expect to spend $150 to $800 here (or more!), per person, depending on who is playing whom.

Here’s a post on the cost of English soccer hospitality packages.

Cost: Getting to England 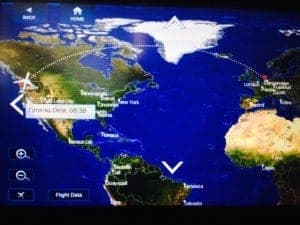 Probably the most expensive view of your trip.

The nice thing about soccer season in England is it doesn’t run in summer, when airplane tickets are the most expensive. It goes from August to May, and whenever I look into it, tickets from the west coast to London seem to run about $900-1,100. Your mileage (and therefore cost) may vary, of course.

And speaking of miles, every time I’ve used frequent flier miles to get there, it has cost 60,000. One time, in January on US Airways, it was 50,000 – which corresponded to the bonus miles I earned for buying a cup of coffee on a US Airways credit card. I’m serious: Buy a coffee, fly to London. Travel hacking rules.

What is the soccer schedule in England this season?

I have also had, on more than one occasion, the experience of a half-empty trans-Atlantic flight. This doesn’t happen in summer.

Asterisk: However you get there, whether into London Heathrow, Birmingham, or Manchester, you’ll pay about a $250 tax for leaving the airport. That’s included in the airfare, but you’ll have to pay it if using miles.

I now subscribe to three different emails that track cheap fares, and I often see fares from the West Coast to England for under $500. Note that’s for basic economy, i.e. you can’t check a bag or select your own seat. Adding those things usually gets you into the $600 range — still a nice fare.

Those emails are TheFlightDeal.com, Scott’s Cheap Flights, and Thrifty Traveler. I find it worthwhile to throw each a few dollars a month for their “premium” service. 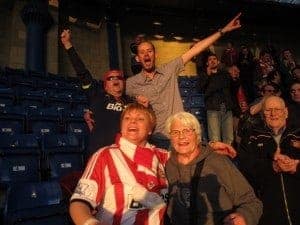 Hotel rooms are super scary expensive in England, especially in London. I am very lucky to have good friends in London. So when I stay with them, this saves me literally hundreds of dollars per trip, while also providing lovely company.

Your average Holiday Inn Express in London will be something like £150, or $200+. Crazy, huh? In cities like Birmingham or Liverpool, it’s more like £100. This can add up, of course. I have done AirBnB in Manchester, Liverpool and Birmingham, and this seems to hover around $100 per night in something that isn’t a complete and obvious dump. If you’re splitting this cost, it can become reasonable.

Another advantage of AirBnB or CouchSurfing is that you can ask your hosts to introduce you to their friends who are soccer fans. This adds a whole new level to the experience. Seeing soccer in England, for me anyway, is largely about connecting with the locals, so why not do this and save some money?

Lately, though, it seems even AirBnB is getting expensive. I was looking at rooms in the coastal town of Bournemouth, and seeing AirBnB rates well over $100 for anywhere near the town center. I then found an independent, three-star hotel practically on the beach for $70 through Expedia.com — which also offers free cancellation on many reservations, as well as loyalty points you can cash in.

That is what I now look for: independent three-star hotels. I personally Expedia for options, reviews and photos, and I rarely pay much more than £100 outside London. 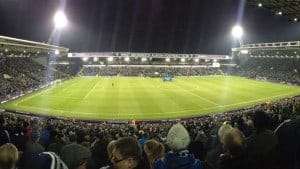 Since I am into longer trips and seeing as many games as I can swing, I try to bunch the games in a particular area to save time and money on trains. On one trip, for example, I had a Saturday-Sunday doubleheader at Wolverhampton and Aston Villa, so I got to stay in Birmingham for the weekend. Then I had a Monday in London, Tuesday in Liverpool, and Wednesday back in London. But I’m insane.

Anyway, train prices are really all over the place, but here are some tips and sample (standard class) fares on Saturdays as of March 2019:

Those fares really are just guesses. Go to nationalrail.co.uk and use their Journey Planner to figure your own costs. 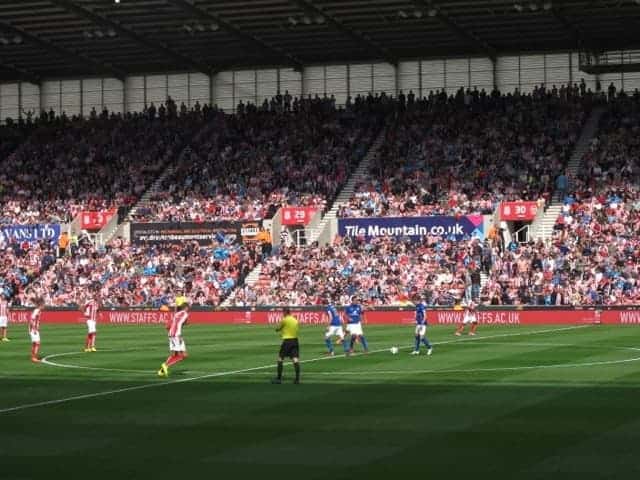 BritRail Passes might also be an option for you. They are only for non-UK citizens, and they are either for a particular region or for the whole country.

You can check the prices here, but what I have found is this: They make sense if you’ll be taking a lot of trains and don’t want to be tied to a particular schedule — i.e. you wouldn’t otherwise be making advance reservations. If you just want to cruise around whenever, this might make sense. Otherwise, I make advance reservations whenever it would save money, and I just accept the loss of flexibility.

Anyway, you could have an awesome soccer trip just in the cities of London, Birmingham, and Liverpool/Manchester (which are 30 minutes apart). Once you go off that main line, train costs seem to go up.

Now, notice the big thing not accounted for here: Food. Also getting around London and getting around the other towns on buses or trains. I don’t eat too extravagantly, so I think we can budget this whole category at about $40 a day. Also of note; I don’t drink alcohol.

There are also stadium tours, which I do for the book, and which go for anywhere from $15 to $30. (Here’s a post from my tour of Fulham’s Craven Cottage, for example.)

Cost: Wrapping It All Up

Okay, let’s now assume I do one of my usual (shocking) 11 games in 13 nights, in five different cities. And let’s throw in that $40 a day for food and local travel. My latest estimate of that trip cost is around $2,500 US. That’s “give-or-take,” of course, but it feels about right to me.

It’s a chunk of money, but it’s a crazy, two-week trip with 11 games in it. At a per-day rate, you could call it $200 a day. So a one-week trip with, say, four or five games could come in around $1,400 – assuming you use miles for your ticket, of course. And, again, I have spoken with people who are traveling with family and spending $500 per night on hotels!

Ways to Save Money 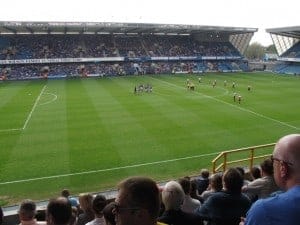 Why not try some lower-league teams like Millwall, in South London.

You could just stay in London, and save on all the train tickets, but London is more expensive to sleep in than these other cities. (It’s also a lot more fun!) You could concentrate on cheaper games in the lower leagues, or the Cups. If you stayed in London for the whole two weeks, you could see at least six games without leaving town – and that doesn’t even take midweek games into account.

You could also base in Birmingham, which has half a dozen teams in the Premier League and Championship in the city or within an hour of it. Same thing for Manchester or Liverpool. Both of these are cheaper to hang out in than London.

If you want to go to England to watch soccer games, and if you’re willing to put in some work in planning and the travel hacking game, it doesn’t have to be a bank-breaking deal. And take it from me, if you love sports and travel and meeting new people, it is absolutely money well spent.