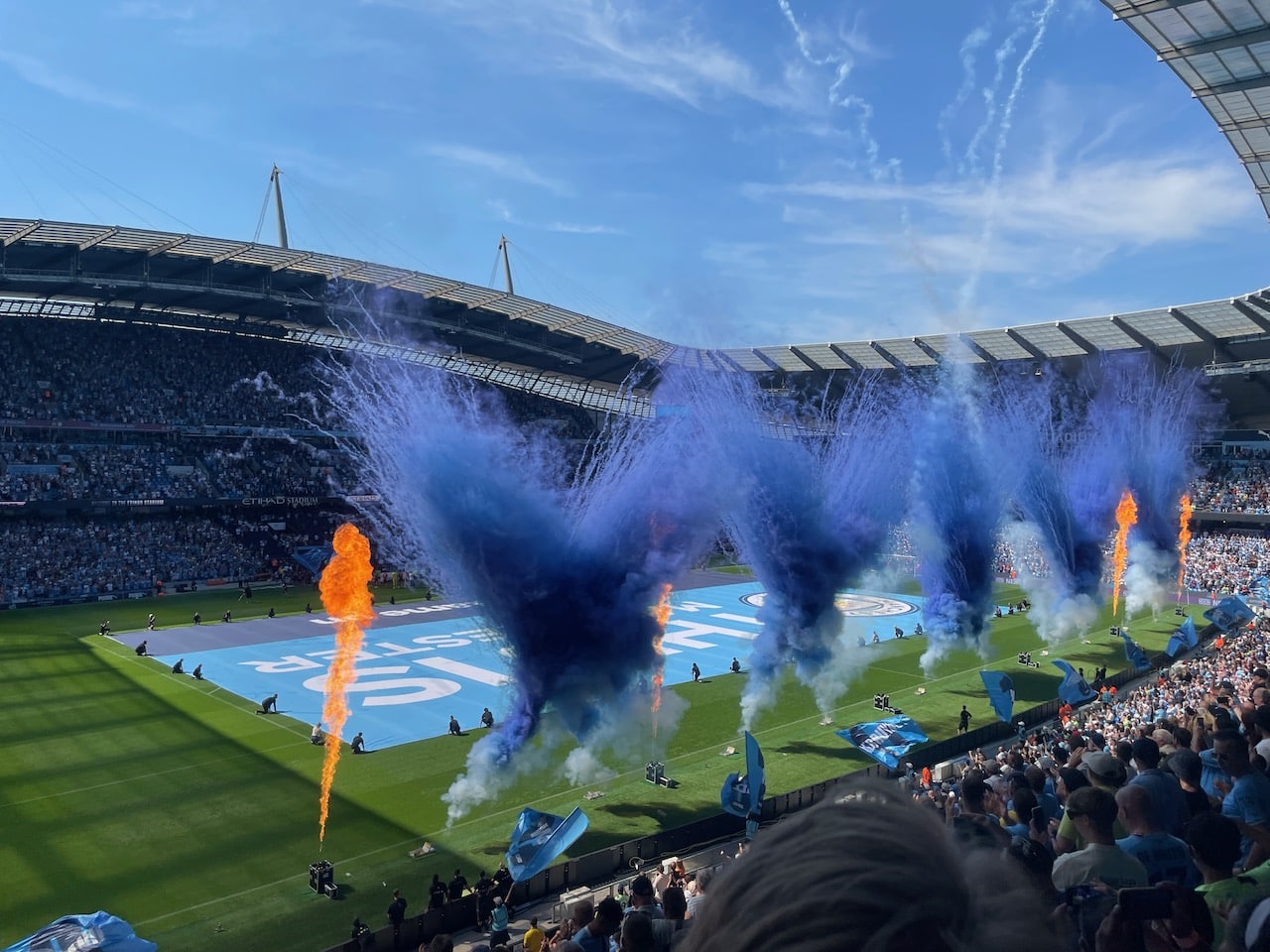 Greetings from the #groundhopping road, where I am actually on a bit of a break right now after three hustling weeks of games all around England.

So far I’ve seen eight games, including three straight home wins after they failed to win in the first five, scoring only four goals in the process. So maybe I’m not a curse. Since then, “home team” has won 8-1 on aggregate, helped mainly by Manchester City steamrolling Bournemouth, 4-0. And my next game is at Bayern Munich, so I suspect they will take care of business, as well.

You can read my full 2022-23 groundhopping plan and also check out all the games I’ve been to in England and Europe.

And here are some photos our clients have sent from the season so far.

A few brief highlights follow; check the photo gallery below. 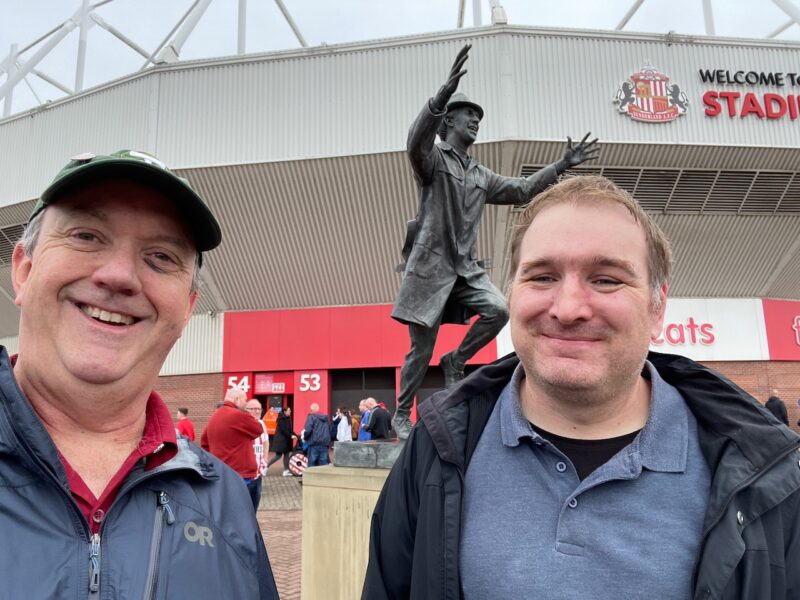 A Twitter follower hooked me up with a ticket; we weren’t sure we could arrange a pregame meeting, then he spotted my Timbers cap in a crowd of 40,000. Thanks, Marra!

I took the train 3.5 hours from London to see Sunderland back in the Championship, and the atmosphere was fantastic. The fans had a big display pregame, and I had the fun experience of getting a ticket from a fan who follows us on Twitter, then having him spot me outside the crowd due to my Portland Timbers cap! We weren’t sure we were going to get to meet up, but we had a few moments in the company of a certain Sunderland hero.

After that I took a couple days off to work, hike in Yorkshire, and make my way back to London for the opening of the Premier League season.

I used our Crystal Palace tickets in the Wait Stand, right next to the Arsenal supporters, who were, let’s say, not impressed by the pregame display in the Holmesdale Road End at Selhurst Park:

Fun game, though — went with my London family, had some excellent pregame jerk chicken, and met some of our Groundhopper Guides clients!

Game of the trip so far, without a doubt. Fulham, back in the Premier League, threw everything at Liverpool, twice pulling ahead to the great joy of the Craven Cottage faithful. I was using some of our Fulham tickets in the new Riverside Stand lower tier. This gave me the prime view of Fulham’s penalty kick to make it 2-1 in front the rocking Hammersmith End.

After the game I hustled off to Euston Station for a train to Manchester.

If Fulham-Liverpool was the game of the weekend, United’s loss was the news of the weekend — as everything United generally is. They are not good, but they used to be, and they have a lot of fans, and a lot of haters, so the media can’t stop talking about them.

I don’t care about results in England, though. I wanted to meet more of our Groundhopping clients (which I got to do) and check out the new Victoria Warehouse Manchester United hospitality package, which is pretty sweet: Nice, comfortable lounge pregame a short walk away, then good seats with a great view of the Stretford End, which on this day ranged from jubilant to, shall we say, disgruntled.

From the glamour of Old Trafford, I went out to the small-town charm of Harrogate Town, in a lovely and posh Yorkshire spa town. The club is in League Two, only in the league for several years, and it’s the kind of place where while I was taking a picture of the entrance with somebody’s bike leaning against a wall, a hay truck drove by! I also paid £10 on the day for a ticket.

I did get a video of Stockport County’s winning penalty kick, in front of their fans and under the Yorkshire moon:

A couple of things here: one is that I thought it would be fun to see Wednesday play on Wednesday, which is very Ted Lasso. I also thought these two big, traditional clubs with large followings would put up a good atmosphere. I was kind of wrong there, because I didn’t realize how much of a non-deal the early rounds of the League (or Carabao) Cup are. They are basically reserves games, played in this case in front of fewer than 10,000 people.

One fun thing, though: I went into a local chippie for my pregame meal, uttered about five words, and was figured out as an American. Thus ensued several minutes of banter and laughter, almost 70% of which I was able to comprehend! Yorkshire folk are the best.

Then I went hiking in the Peak District, which has nothing to do with football but does maintain my sanity. I just have to share one image from that: 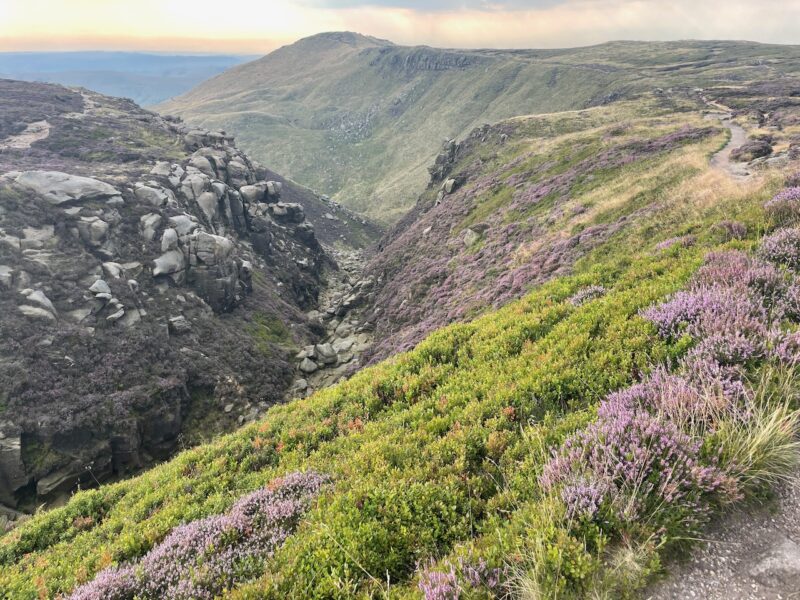 Hopping over a different kind of ground

Okay, and a video.

Before the Wednesday Wednesday game (sorry) I had seen the home team play five, score four goals, and win zero games. I knew City would end this run if the Owls didn’t, and they did not disappoint. This was men against boys, which I at least enjoyed from the 93:20 Suite we sell at Manchester City.

The main highlight for me, which I sadly didn’t get a video of, was the Bournemouth fans taunting City fans with the chant, “Where were you when you were shit?” The City fans had the perfect response: “We were here when we were shit!”

My dream was to get a ticket for Sunday’s game at Nottingham Forest, but they aren’t even selling memberships to people who weren’t members last season! Good on them. I would say the toughest tickets in the Premier League this season are definitely them, Bournemouth and Brentford.

I know people in the #groundhopping world who insist they will never go to MK Dons, as it’s really just the old Wimbledon FC rebranded and moved to a “new town.” British people practically spit the word “franchise” at them, and it appears the residents of Milton Keynes aren’t sure what to make of them, either.

It’s a beautiful, 30,000-seat stadium, in which they average about 9,000 per game in League One, and when I was there they claimed 7,000 were on hand. I’m not convinced. It’s the closest thing to lower-tier MLS I’ve seen in England — lovely stadium, sparse crowd, not much atmosphere — but even that doesn’t capture the full experience. I will write a full post on this some day.

Meanwhile, I’ve not been to Port Vale, but they might not want me around: I’ve seen them play away four times — and lose four times!

Next up: A run through Germany, for games at Bayern Munich, Dortmund, Bayer Leverkusen and Borussia Mönchengladbach. Then probably France for some Champions League.

Thanks for reading, and stay tuned!

Click on the first image in the gallery here to scroll through all of them: