Seeing a Game at Charlton Athletic 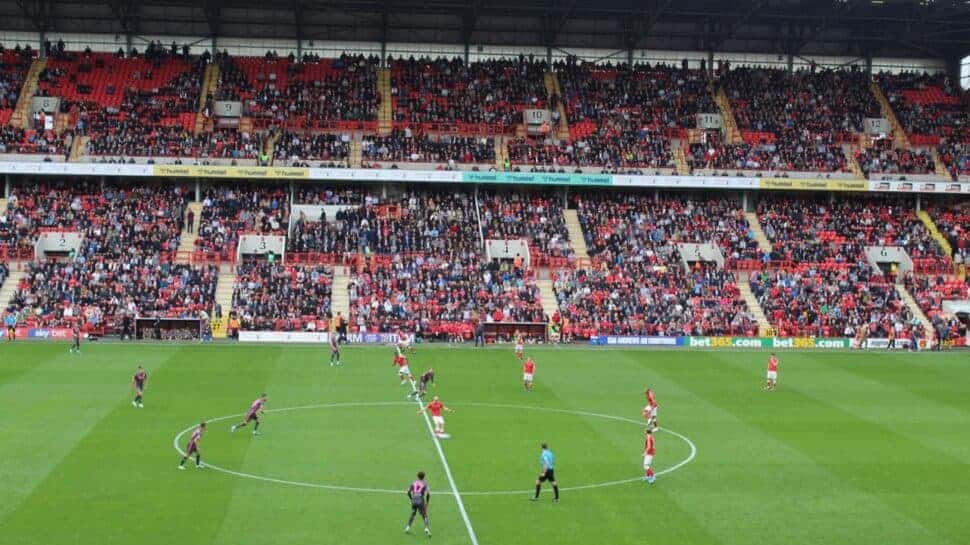 Kickoff at Charlton Athletic, who get a home game in the EFL Cup First Round against Wimbledon.

American travel writer Rick Steves calls his business “Europe Through the Back Door,” and he always encourages people to be “a temporary local.” I have taken this philosophy to heart in my English soccer exploits, and it regularly sends me to places like Charlton Athletic in South East London. 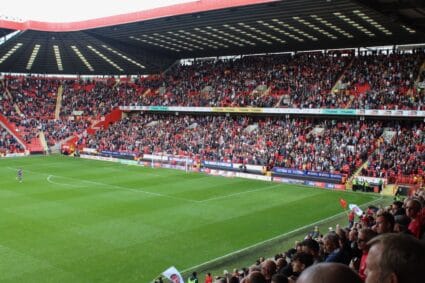 The Covered End at The Valley.

If you’re pretty new to English soccer (and if you’re reading this, that’s likely), you probably know a lot about the Premier League, and little to nothing about Charlton. And that’s the point. While quite close to two Premier League clubs, West Ham and Crystal Palace, and two leagues below them in League One, Charlton are in fact in a different world.

And again, that’s the point. 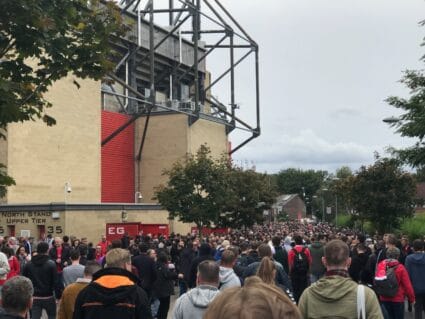 (The game I attended was in 2019, when Charlton were in the Championship playing Leeds United. In 2020, Charlton got relegated to League One and Leeds went up to the Premier League. That’s where they both remain as of the 2021-22 English football season. Here’s more on all the leagues and cups of English soccer.)

As my friends and I walked the streets from Charlton Station down to the club’s home ground, The Valley, I didn’t see anybody taking selfies, asking stewards for directions, or holding up their scarves for a photo to prove to Instagram they finally arrived. I am sure there were other visitors about, but the vibe at Charlton is one of longtime fans who have been through it all together and are still here. Words like “family club” are widely overused in England, but it’s not lost here. Nor would be “traditional.” 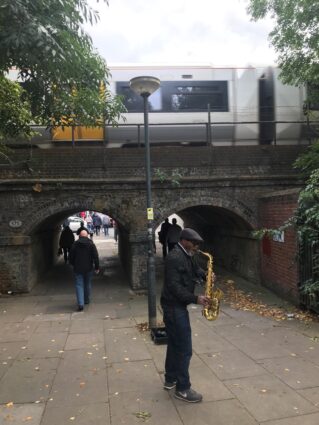 A bit of pregame atmosphere.

The club hasn’t been in the top tier since a seven-year run ended in 2007, and since then they’ve been yo-yo-ing between the second and third tiers. It’s in that time that most foreign visitors, and certainly Americans, have started paying attention to English football. So Charlton is a club whose fan base would seem to have been reduced to its essence: locals and generational types, dotted with the occasional groundhopper but undiluted by tourists and away fans sneaking into the home end to see their visiting heroes.

While of late there has been some real bitterness between a dedicated fan base and a terrible owner — finally replaced in 2020, thankfully — Charlton is still the kind of place where your seat neighbor might enjoy some chatter with you and be impressed you’re even there, where the program sellers seem to know most of their customers, where people have sat together for years, and where, when the team is on top and a song breaks out, the whole stadium joins in, because their dads taught them the words. 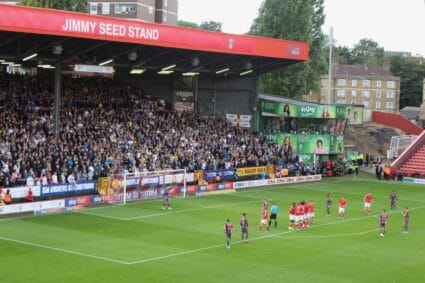 Corner kick in front of the Leeds United supporters.

Perhaps I’m being nostalgic and too sweeping with my takes, and perhaps it’s enough to say that places like this are fun and I wish more people would go to places like Charlton instead of insisting on a Premier League match. And maybe the old adage of tiered tourist experiences applies here: on your first trip you see Arsenal or Chelsea, because that’s who you know. On your second, you see Millwall or QPR in the Championship. And on your third maybe you go to Charlton because you know one of their rivals is in for a game, so you know there should be a good crowd and a proper atmosphere. 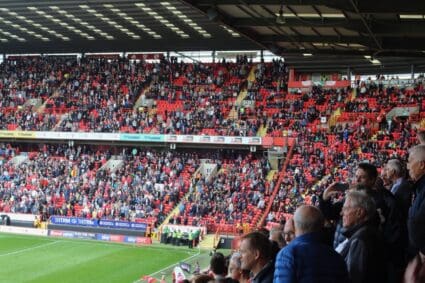 Close-up of the Covered End.

(For your fourth-level trip, by the way, may I suggest a non-league club such as Dulwich Hamlet or Boreham Wood.)

On this day, we first followed a local’s tip to a Chinese restaurant in a Greenwich Holiday Inn Express surrounded by empty fields and construction sites. Add Saikei to your off-the-track London culinary exploits, for good food, reasonable prices, and a chance to hear old Chinese men speak with bewildering East End accents. 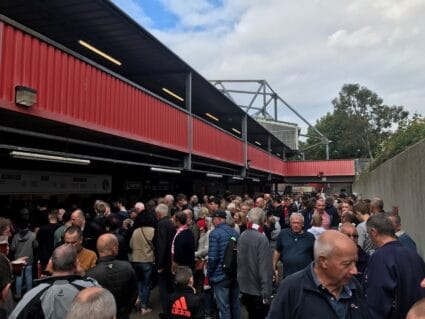 Then, at The Valley, we and a good crowd under the actually shining sun saw the Addicks take out the league leaders, 1-0; the nickname apparently comes from the local pronunciation of “haddock,” given to players after games in the old days. I can report that the Covered End can still bang out a song or two when the team scores and the sun shines.

Here are the teams coming out before the game:

After the game we even got served a dash of the bad old days, as somebody yelled the wrong thing at the wrong person on the street, a scuffle broke out, and cops came in from every direction to pick people out and pin them against walls. My friend earned some points with his wife for throwing himself between her and the onrushing wall of yellow, reflective tape and obscenities. 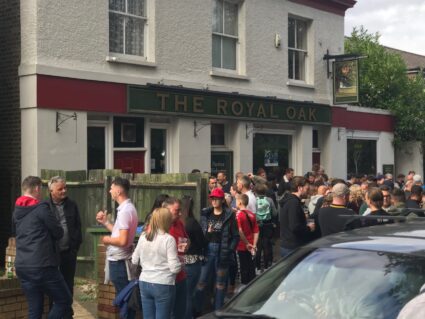 The Royal Oak looked the best option for a pregame pint.

But don’t let that little incident make you worry about a game at The Valley — nor the somewhat likely fact you’re just now hearing about them for the first time. Head over to Charlton some Saturday afternoon, have a pint at the Royal Oak, get a couple of £30 tickets (on the day!) and enjoy some proper English football.

After going through the visitors entrance and being a tourist at some huge and anonymous (if glamorous) club, slip through the back door and be local down in South East for the afternoon.

Here is my Photo Gallery from the Day: