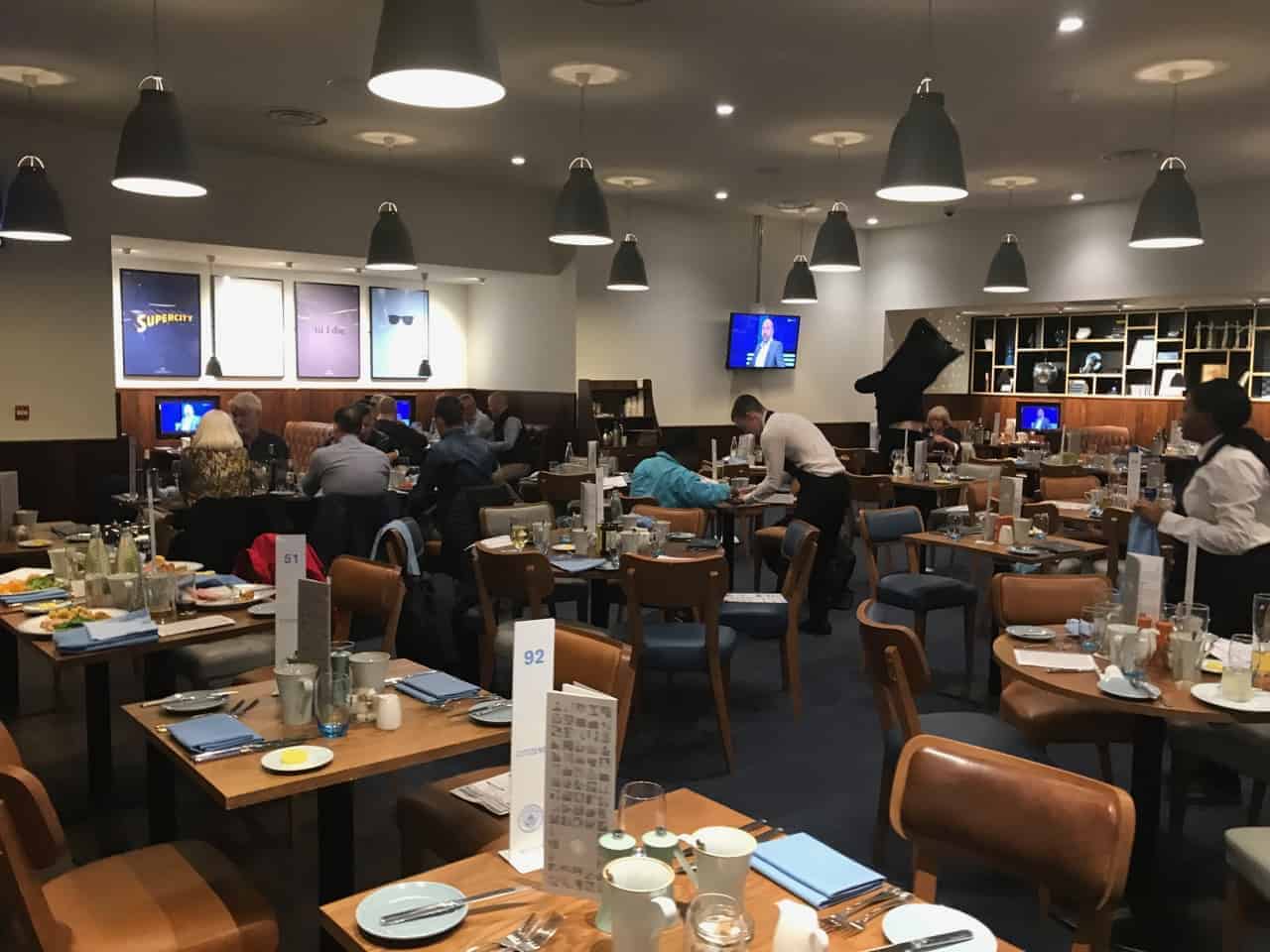 Groundhopper Guides sells tickets and hospitality to many Premier League English soccer clubs. Here is a look at our six favorite options.

First, though: What is hospitality in English soccer? The short answer is tickets to a game plus some kind of benefit, a combination of lounge access, food, drinks, a stadium tour, etc. Here is more on Premier League tickets and hospitality.

And here is a list of all the English clubs where we sell tickets and hospitality.

For our favorites, we are looking not at the club — we are strictly neutral in that regard — but at a combination of the seats (mainly) and the benefits, which in these examples is mostly about the food. These are not ranked in any particular order, and they are definitely options you’ll want to consider for your Premier League groundhopping adventures. 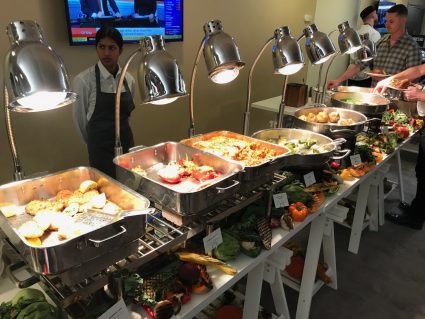 Part of the Centenary buffet at Chelsea FC.

Let’s start with the buffet, which is truly outrageous. Many stadium meals are, well, stadium meals. But this one is on another level, both in quantity and quality. That photo above is just the hot entree section! There’s also a dessert table to die for.

And then there are the seats, middle tier in the East Stand, with the away fans just in the corner to your left. Groundhopper Paul shot this video walking into the Centenary seats (sorry about the music, though; take that up with the club.)

Here are all of our Chelsea hospitality packages.

And for our fellow Americans, it’s pronounced “sin-TEN-ery,” not the way we say it.

The Citizens Lounge at Manchester City

This is the only buffet that really rivals the Centenary Club at Chelsea for good quality, plus it’s a sit-down affair with table service in the stadium, just behind the seats, whereas Centenary is in an attached hotel pregame and postgame. That might give the Citizens Lounge the slightest of edges. 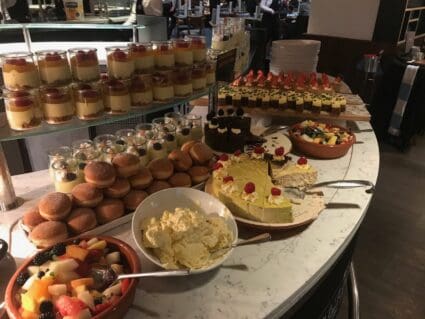 The seats, though: We simply don’t sell better seats at any club than these. The Etihad has three tiers, and our seats are in the front two rows of the middle tier, right on the halfway line. Oh, and they are padded, spacious, and luxurious.

This video shows the views from and of the seats. Remarkable.

We also have hospitality packages for the 93:20 Suite at Manchester City.

The Anfield Beat Lounge at Liverpool

We love us some banter at Groundhopper Guides, so being close to the away fans — like in Chelsea’s Centenary — delivers in that regard. Another great example of this is the Anfield Beat (previously it was the Code) Lounge at Anfield, home of Liverpool FC.

Inside the Anfield Beat Lounge at Liverpool FC.

This one isn’t so much about the food, as the Beat Lounge is pretty much a sports bar that is at least more comfortable and spacious than the concourse. And they usually have a former player in for some Q&A. This one is about the seats — middle tier, around the penalty area, next to the away fans.

Groundhopper Paul caught an FA Cup Merseyside Derby a few years back, and while there won’t always be this many away fans — Everton got 9,000 seats because it was a Cup tie — this gives you an idea of the view from Block L12, where our Beat Lounge seats are generally located. The away fans at league games will be in the near corner.

We have some other great seats — the stuff in the opposite stand almost made this list — among our hospitality options at Liverpool.

Some folks might want to be closer to the pitch than this — and we do have midfield, lower-row seats at Tottenham’s glorious new stadium — but for us, being a little higher is that much better. And with these seats, you are literally right above the away fans, which is honestly kind of fun.

Plus there’s the lounge, with free food all over the place, reservable restaurant seating, free drinks at halftime, bars galore, live music … it’s really something. 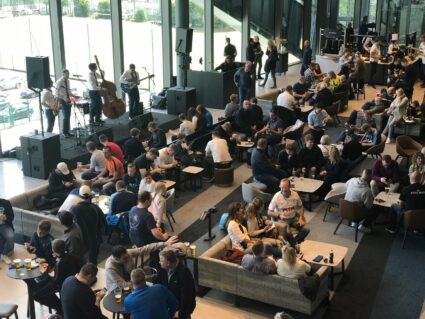 The seats are just outside this lounge, and they are comfortable, spacious, and have great views.

This video, of Everton fans celebrating a goal, is actually from Block 313. So imagine being two blocks to the left from here! That’s where Block 315 is.

Here’s a view we shot from Block 315 pregame: 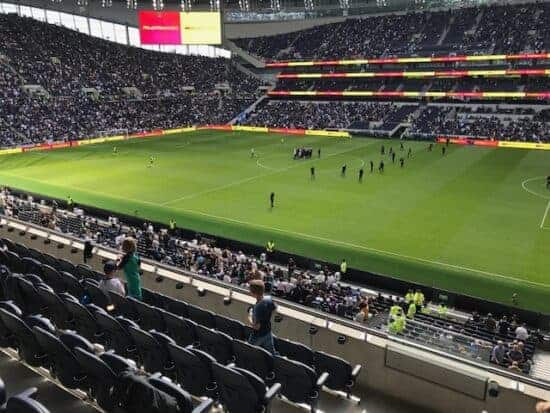 Here is more on our Tottenham tickets and hospitality, including those pitch-side seats.

The Horizons Lounge at Watford

We think Watford is a great place to see a game: not far from Central London, easy to reach, with a friendly, small stadium, and a lovely package in the modern, comfortable Horizons Lounge. You get free food before and after the game and a full bar, with the seats just steps away.

This is inside the lounge: 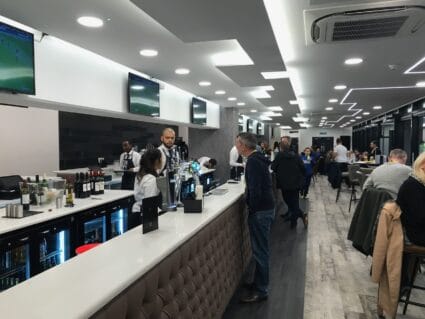 Inside the Horizons Lounge at Watford FC.

And this pregame video is from the seats, which are in the Upper Graham Taylor section, but only in the first two rows.

The Executive Club at Manchester United

Full disclosure: this one is new to us for the 2021-22 season, so we’ve not actually been there yet. But we can’t wait to check it out, because it looks amazing.

First, consider what it comes with:

Again, we haven’t been there, but the seats are in block N3404, and this view was taken (by user Yannico1997 on aviewfrommyseat.com) from the next section over, 3405. So you get the idea. 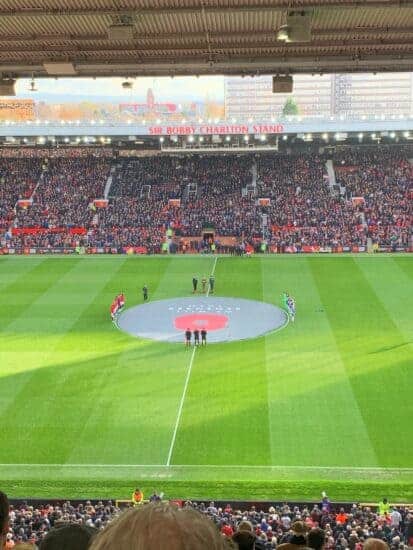 Here are our numerous options at Man United, where honorable mention for this list goes to the International Suite in the Stretford End.

Would you like to see a Premier League game in England? Fill out this form and let us know which fixtures you’re interested in, and we’ll send you a quote.