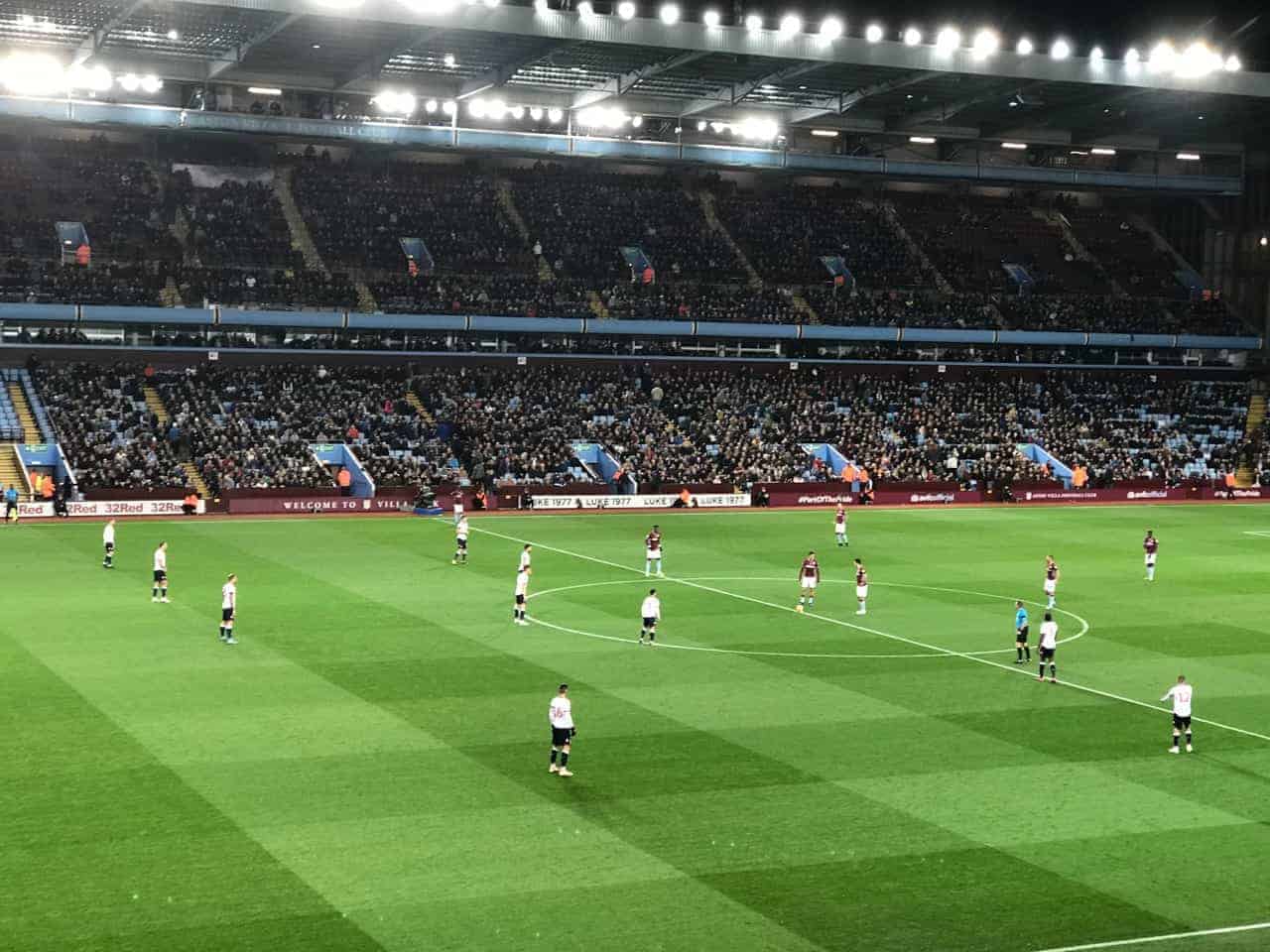 Really, the title of this post should be something more like, “Why insisting on seeing the big Premier League clubs in London, Liverpool and Manchester makes you miss so much that’s great about English soccer.” Here’s why you should go beyond the big six. 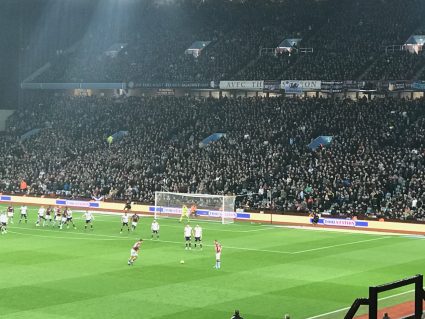 Free kick in front of the Holte End at Aston Villa.

I was reminded of this once again when, while researching a 2018 footy tour of England, I went to three games in three days: Bolton Wanderers at Aston Villa in the Championship, Brighton and Hove Albion at Everton in the Premier League, and Leeds United at Wigan Athletic in the Championship.

(Note 1: This post was written in 2018, and some of these clubs have changed leagues. But you still get the idea.)

(Note 2: You can read about the first part of that research tour in this issue of my newsletter, The Yankee Groundhopper.)

Together, these three games served as a wonderful reminder that everybody who focuses so intently on seeing games at Arsenal, Chelsea, Man U, Liverpool and Tottenham are missing so much good stuff. People are so focused on the glamor — but hell, I hardly ever get inquiries about hospitality packages to see games at Manchester City! 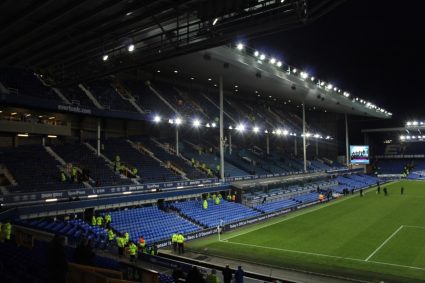 I guess I get it — people want to see the Big Names — but honestly, I don’t. Is it a particular shirt you want to see, or is it soccer? Why would people want to sit among 75,000 other people and watch a boring Manchester United play “whoever they’re playing” when they could see, as I just did, 4,900 Leeds United fans at Wigan celebrating going to the top of the league? Why sit in cavernous Wembley Stadium to watch Spurs, as I also did on this trip, when you could go back in time to see a game at Everton’s Goodison Park?

To each their own, I suppose. For me, it’s about the occasion, the atmosphere, the people and the connections. Allow me to show you what I mean. 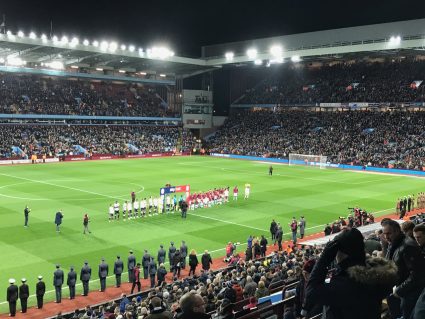 When this game in the Championship got moved, thanks to television, to a Friday night, I was all over it. I just love Villa Park, one of the grand and historic grounds in the country, and on my previous visit I hadn’t done a very good job of researching the pubs, etc., for my book.

Plus, I had a personal connection: My London family has a neighbor who is an avid Villan, goes to every home game, and was headed up for the evening. This meant that I walked over from my hotel to a pub called the Windsor, where I met him and his mates: two Aston Villa fans and a (gasp) Birmingham City fan.

We had a great time talking football, especially because I really strive to not be just another American who only knows about the big clubs. I mean, imagine if you were taking a British person to a baseball game; it would be a lot more fun if they knew about more than the Yankees and Red Sox, right?

They also took me to a pub I never would have known about: The Old Contemptibles. The nickname comes from a British military force in World War II, and the place has been a pub since the 18th century. It is a proper old and war-themed pub, highly recommended.

From there we took a taxi to Villa Park, truly a grand place for a game. Villa won easily, 2-0, and afterwards I came across a funny little bit of culture: 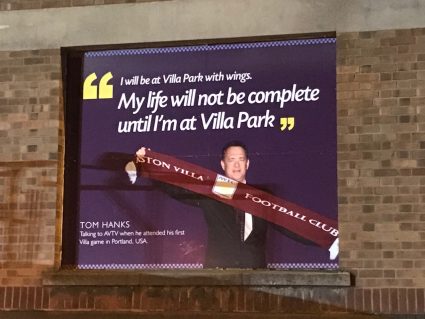 Tom Hanks, a Villan? Who knew?!

Even funnier to me: This alleged quote was allegedly stated in my hometown of Portland, Oregon!

Here’s a guide to all the leagues and cups of English soccer. 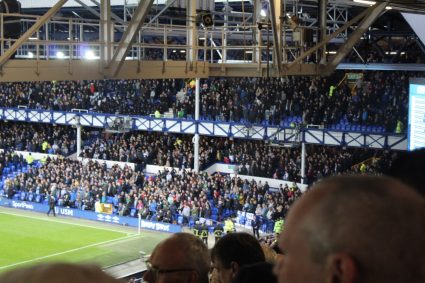 Away fans just down to your right offer some good atmosphere.

Even within the Premier League, I wish more people would forget about Liverpool and go over to Everton instead. I realize Liverpool are a lot better right now, and Anfield is impressive, but Goodison Park is one of the last great old grounds. And there is a real community vibe at Everton, not such a touristy / international vibe like there is at Liverpool, Man United, etc.

I also happened to catch a 3-0 win over Brighton, which helps. And I was checking out the hospitality package I sell for Everton home games, so it was fun to finally see what it is I send people out for. You can read more about that package, which is called “The People’s Club,” here. 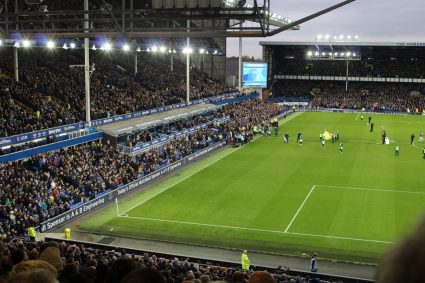 I said hello to my neighbor, said it was my first time, and they said it was their first time sitting in the hospitality areas. So then we all bonded over that and had a great time talking about the game, the stadium, the club, and some of the other grounds we’ve both been to.

It was a great reminder of one of my basic rules for attending English soccer games: Always say hi to your neighbors!

Here’s a little video atmosphere from before the game, when the teams come out to the traditional theme from an old TV show called “Z-Cars.”

And just for kicks, here is how I got to the game from a local train station. It runs for Liverpool games, as well! 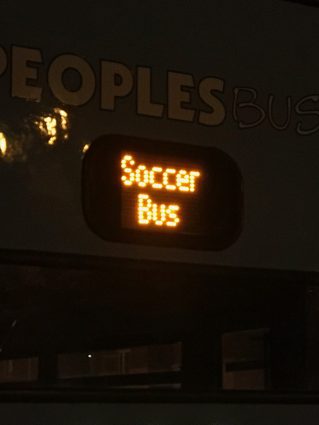 How English(!) people get to either Everton or Liverpool games.

Remember, kids: Don’t take any crap from English people about calling it soccer. 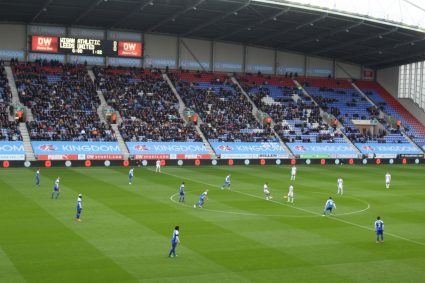 The real prize of this weekend for me, and maybe the most fun I had the whole trip, was seeing Leeds United play at Wigan Athletic in a Sunday afternoon Championship game.

Leeds, as they say, are “flying” this season, hanging out near the top of the league most weeks, and with a Sunday game in good weather at a ground where tickets are notoriously easy to get — Wigan cares a lot more about rugby, it would seem — word was they had sold 4,900 tickets officially, with even more showing up. Such is demand for Leeds away tickets that hundreds of them couldn’t get into the 4,900 allotment. 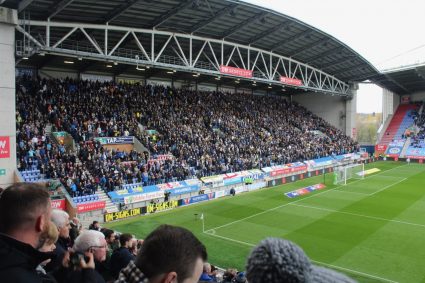 I knew the latter was true because one of those “home end” away supporters would be sitting right next to me. My buddy James is a Leeds supporter who lives in Greater Manchester, so he came up for the day.

For pregame snacks, we sampled a local pie, which apparently Wigan is famous for. All I can say on that is that their reputation must be based on somebody’s long lost childhood or something, because it isn’t based on taste.

We walked over to the rather dull DW Stadium where, from the beginning, all the noise was from the Leeds end. In fact, some one-third of the crowd was in the Leeds End, and even that was just the official take. They were entertaining themselves by singing “Sky TV is fucking shit,” since their games keep getting moved by the broadcaster, and by making fun of Wigan fans by singing, “We don’t need a drum.”

The first real fun was when they scored their equalizer, which I caught a video of:

See, that’s what I want to see at a game, and I don’t care who provides it! I want atmosphere, a good view of the away fans, and plenty of them having something to shout about. And I will travel to see it. 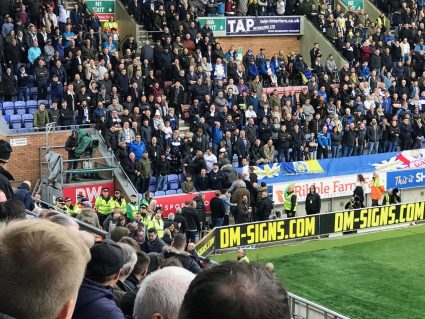 By the way, towards the end of that clip, you might notice the beginnings of a disturbance in the lower left corner, and you can hear my friend James talking about stewards coming over and people going out. That’s because some of the Leeds fans in the Wigan section had jumped up and celebrated the goal, which is a no-no in England.

We assumed that (A) it was going to kick off and/or (B) they would be removed from the stadium. As it happens, neither did; the stewards escorted them into the Leeds end (we briefly considered joining but it was too far for my liking) and everybody calmed down. So fair play to everyone.

And then the Leeds fans sang “We’ll sit where we want!” I love it. Leeds need to get promoted.

And they just might; by the end of the day, after scoring to win it 2-1, they were singing this one quite a bit:

In this video you can see James checking his phone, waiting for the BBC to refresh the table and show Leeds where the fans already knew they were: top of the league! 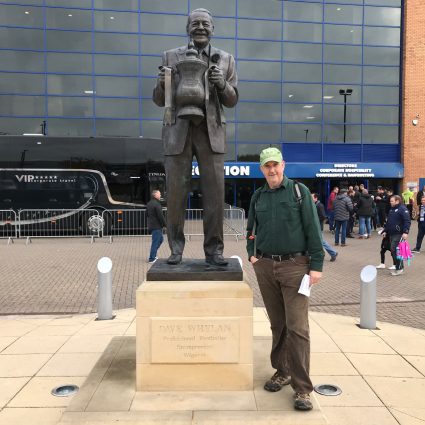 Me outside the ground at Wigan Athletic. That’s a statue of their former owner, Dave Whelan, holding the FA Cup.

This whole weekend is the perfect distillation of why I love seeing English soccer, and not (just) the big six clubs. If you make a little effort to learn what you’re looking at, to get yourself to a game with some atmosphere and meaning, and to connect with some of the people around you, then it’s a whole different ballgame from the nonsense at the bigger clubs.

So go forth, groundhoppers! Travel the lower leagues and the “lesser” Premier League clubs. You — and they — will be glad you did.

And let me know if I can help!